Eyewitness Account: When a Langar Came From Shaheen Bagh to Gurudwara Bala Sahib

Delhi police stopped a contingent coming to Shaheen Bagh from Punjab on Tuesday night. Fortunately, their fellow protestors made sure they were comfortable. 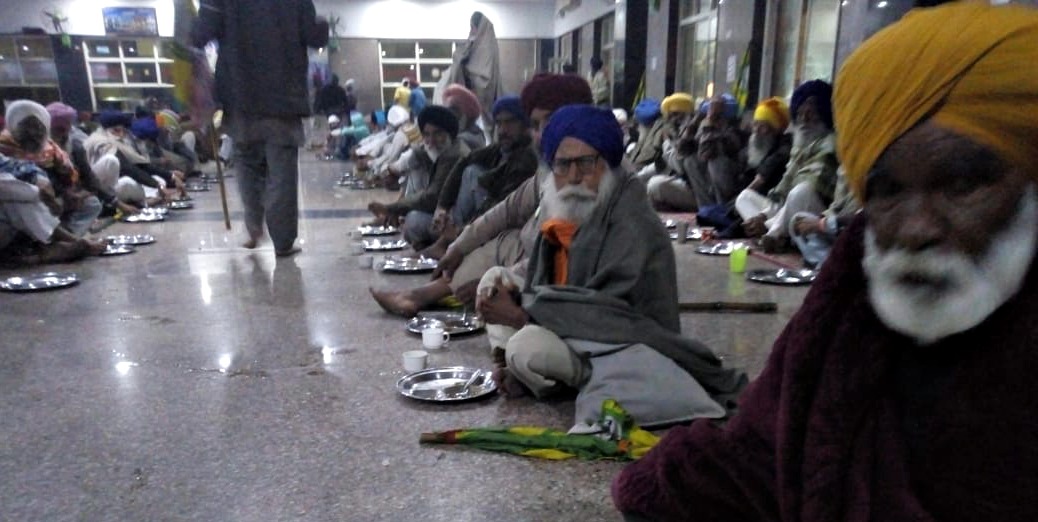 New Delhi: At about 11 pm on Tuesday night, the bonhomie at Shaheen Bagh was palpable, as usual. Less than 30 seconds after asking for mutton korma at a busy eating joint in the area, overcrowded by anti-Citizenship (Amendment) Act protestors, I got a phone call: “The police in Delhi have stopped our buses (some 500 comrades including women coming from Punjab) from reaching Shaheen Bagh. We are near the Sarita Vihar petrol pump barricades.”

A young man overheard the conversation and offered to accompany me, along with another man, to Sarita Vihar to look at what had actually happened. There were eight buses standing, and two police vehicles were about to ‘escort’ them to the Gurdwara Bala Sahib along the Yamuna river, 2 km from Shaheen Bagh.

Harinder Bindu, leader of the Bharatiya Kian Union (Ekta-Ugrahan), was in one of these buses. She put on Google Maps on her phone to know whether the cops were actually taking them to the said gurdwara for the night, or somewhere else to be detained.

Back at the Shaheen Bagh protest site, an announcement echoed: “Delhi police have detained our brothers from Punjab, not allowing them to reach here.”

The 500 Punjab ‘warriors’, as they were earlier named for their participation in heavy numbers at Shaheen Bagh last month, were hungry when they finally made it to the gurudwara.

By 1 am, several men from Shaheen Bagh reached Gurdwara Bala Sahib, saying that a langar would soon be brought there.

“Hum apke intezaar mein the, aur khana banwa liya tha, yahin aa raha hai (We were waiting for you at the protest site and food had also been cooked, it is being brought here now),” said Shaheen Bagh volunteer Taimur Chauhan to the BKU (Ekta-Ugrahan) cadres.

The situation for the sevadars at the gurdwara was difficult, as hundreds of people queued with empty plates.

“Please do not name me, but let me tell you that we were not at all aware that such a large number of people would be arriving at midnight,” said a sevadar. The gurdwara is managed by the Delhi Sikh Gurdwara Management Committee.

Chauhan found his way to the worrying sevadars. “Do not worry, Singh Sahib, your Sikh brothers already camping there (at Shaheen Bagh) had prepared the langar, and there is vegetable biryani cooked for you.”

Ferrying the food wasn’t an easy job for the Shaheen Bagh volunteers. They were stopped midway by the Delhi police, who questioned them for 45 minutes. Confirming this, Chauhan said that “such harassment at the hands of the police is routine for us now”.

More than 100 protestors from Punjab, from different organisations like the All India Students’ Association (AISA), Revolutionary Youth Association (RYA) and CPI (ML)-Liberation, were already camping at Shaheen Bagh. Some had been there for two days, others for over four days.

“It is amazing, watching Muslim women in veils raising ‘Inquilab zindabad’ slogans as loudly as they can. They are so inspiring, really,” said Binder Singh Alkh, Mansa district unit president of the RYA.

Hardam Singh from AISA, who is a bachelors student in Mansa, was seen teaching a Muslim protestor, Wasim from Rajasthan, how to tie a turban in the Sikh tradition. They all then posed for a picture, with Wasim in a white turban at the centre.

“This is so amazing, that the youth from different states are exchanging phone numbers and discussing matters concerning the country today,” said Sukhdarshan Nath, general secretary of the CPI(ML)-Liberation’s Punjab unit. “This is the real power of the people, to take the establishment head-on.”

“Many of our men had never seen a mosque from inside, and they even asked where to pay obeisance inside the mosque premises. I told them that Muslims always carry the Quran with them and their holy book is never placed inside the mosque, unlike our Guru Granth Sahib,” Nath explained with a smile.

The men from Punjab were have been offered the mosque premises for bathing and other purposes. They slept in groups adjoining the crowds of women that have been spearheading the protest that entered its 54th day.

The crowds at Shaheen Bagh on Wednesday morning cheered and welcomed the Punjab contingent, which had maturely handled the cops with restraint last night.