'Our Fight Is Still On': Shaheen Bagh's Spirit Remains Unbroken

“We will not let our efforts go to waste. We have accomplished some things, but the fight is long,” said a woman protester. 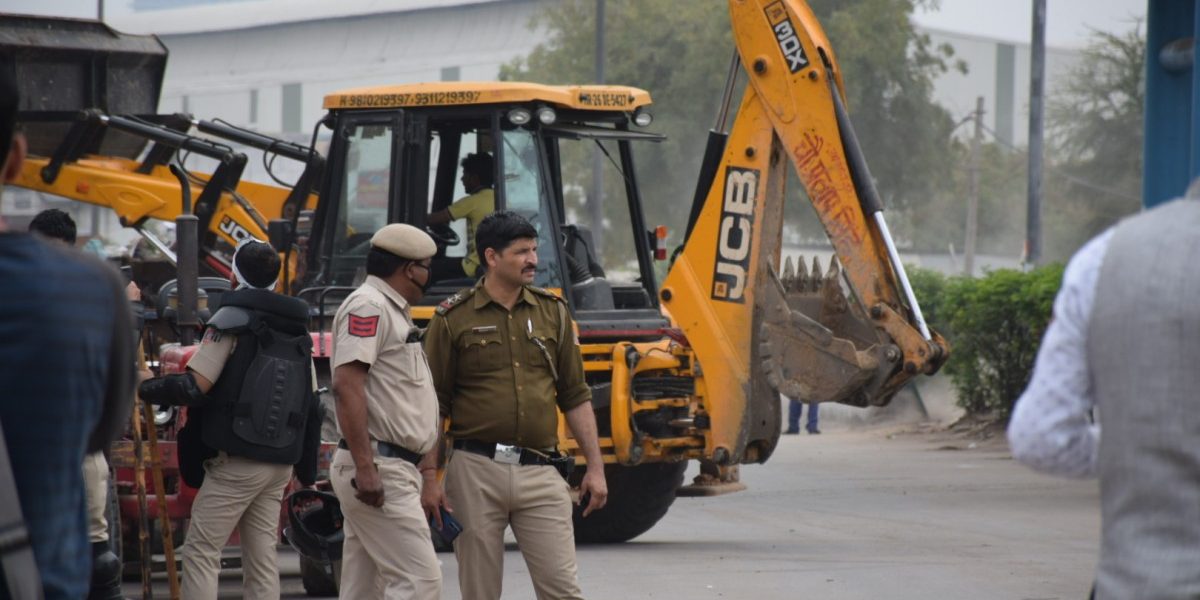 Clearing of the protest site in progress. Photo: Ismat Ara

New Delhi: At around 9:30 am on Tuesday, standing in groups of twos and threes on the lanes of Shaheen Bagh were people bearing worried expressions.

The Shaheen Bagh protest, where hundreds of women were stationed on the Kalindi Kunj road, had been removed by the Delhi police early on Tuesday morning in the wake of the lockdown owing to the outbreak of the coronavirus. A policeman, upon being asked how many police officials were present in the area, told The Wire, “more than a thousand police were stationed in the area to control the situation if it gets bad.”

However, he didn’t elaborate about what he meant by the “situation getting bad”. At the same time, another policeman entered the scene, ordered the media to not go inside the lanes of Shaheen Bagh lanes and held them responsible for “irking the sensitive locals”. 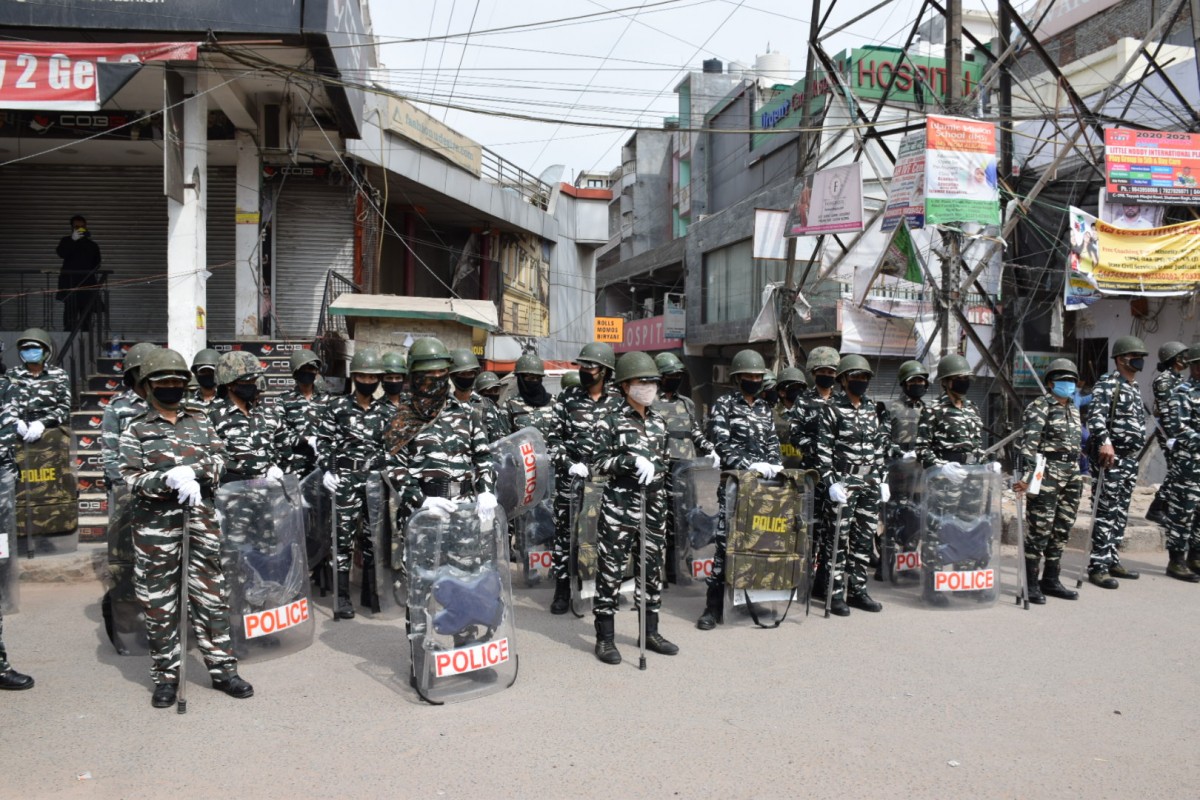 According to a woman who had returned from the protest site at 4 am last night, protesters had been removed forcibly by male police officials in the morning around 7 am. “When we got a call that the police had entered the protest site and removed people, we rushed to the spot immediately. But there were thousands of police and they didn’t let us in at all. We were all very scared, the police threatened to arrest us.”

Another woman standing in the lanes said, “They [male police officials] mishandled the women. How can they do that? They also picked up a boy from this locality.” 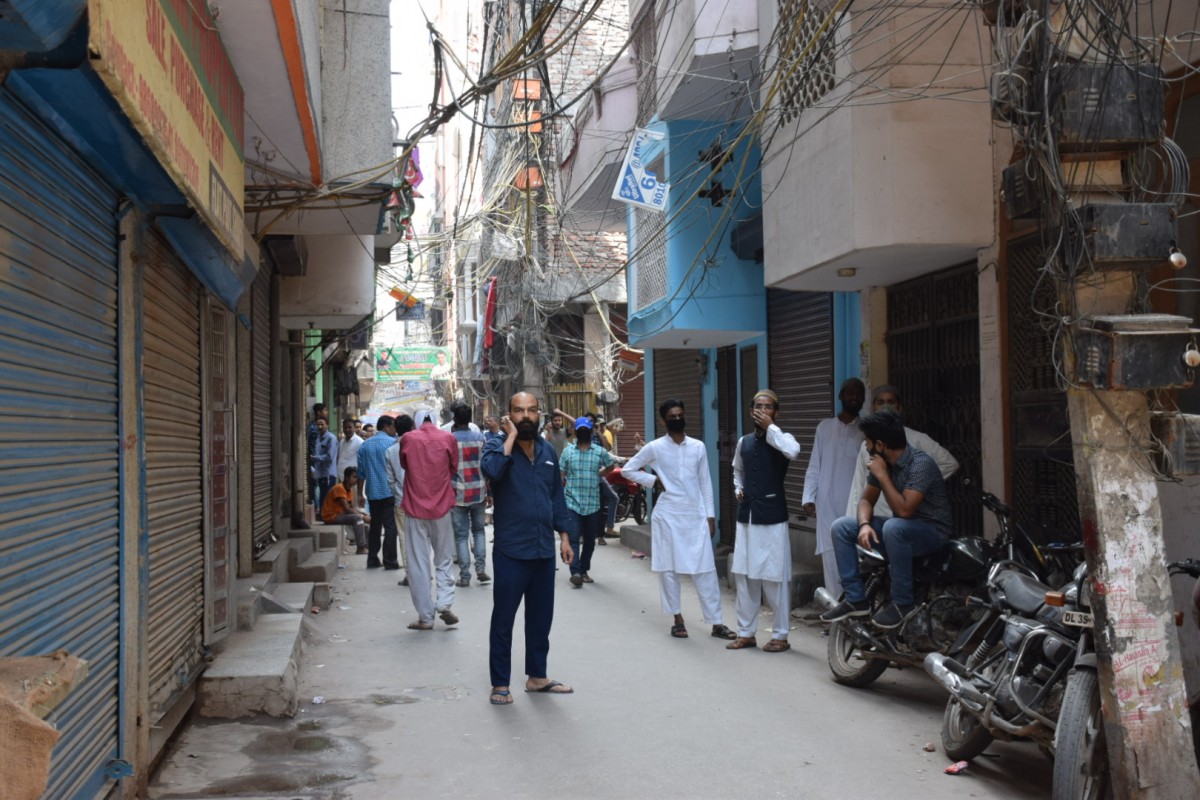 The police, however, refute all claims of women protesters being mishandled at the site. One official said they had removed protesters because they were “in violation of the ongoing lockdown in the national capital.” The officer also claimed that before removing the protesters and detaining them, they had been given ample time to clear the protest site. 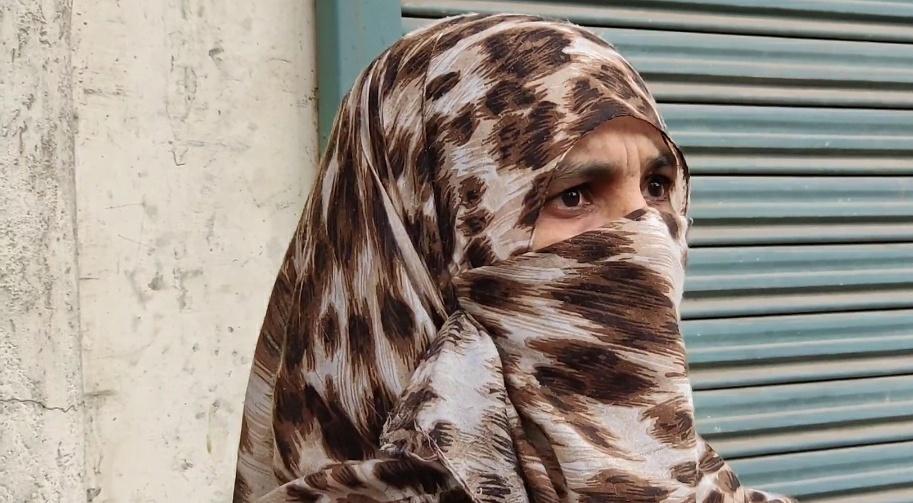 A woman protester in the lanes of Shaheen Bagh said, “our fight is still on”. Photo: Ismat Ara

On Monday, Delhi had been, among other cities, placed under lockdown by the state government as a part of the measures implemented to curb the spread of the coronavirus. The Delhi government, led by Arvind Kejriwal, had said that all public gatherings, including protests, would be prohibited.

Mohammad Jameel, a carpenter who had been going to the site of the protest every day since it had started, reached the spot after he was informed that the protest was being “uprooted.” “I had been going to the protest site every day. Today, when we heard about the police removing protesters, who had done nothing but cooperate with the police, we immediately rushed towards the protest spot. I felt very bad, to see that all the efforts of the women in the past three months were for nothing.” He claimed that it was only because of the coronavirus outbreak that the police could remove the protesters, otherwise, “they wouldn’t stand a chance against the protesters.”

Mohsid, a young student at Jamia Millia Islamia who had been actively participating in the protest since it started, said, “Look at this place. There are police all around. The police have ruined everything, all our efforts.” 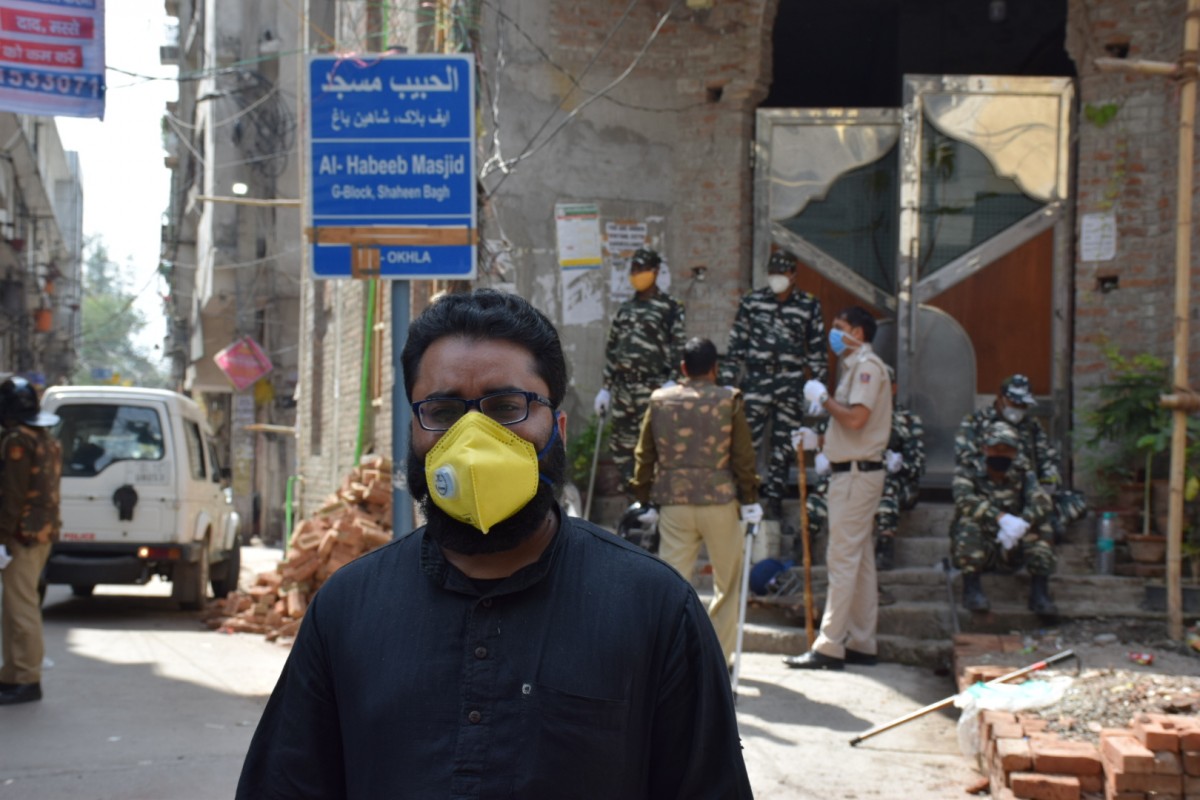 However, Shoaib Jamai, a regular at the protest site who called himself the “media coordinator” of the protest, said that the police had “betrayed the protesters.” He said, “The protest had been going on for the past hundred days, and in full force. Even though many states had passed resolutions against NPR, and the government had also changed its tone about NRC, our fight had just begun. CAA has still not been revoked.”

Ever since the government had ordered a lockdown in the capital city of Delhi over concerns arising from the outbreak of the coronavirus, protesters in Shaheen Bagh had agreed to protest symbolically, by keeping their slippers at the protest site and leaving the protest site on the condition that none of the structures – the tent, the India Gate caricature and the map of India – would be dismantled. 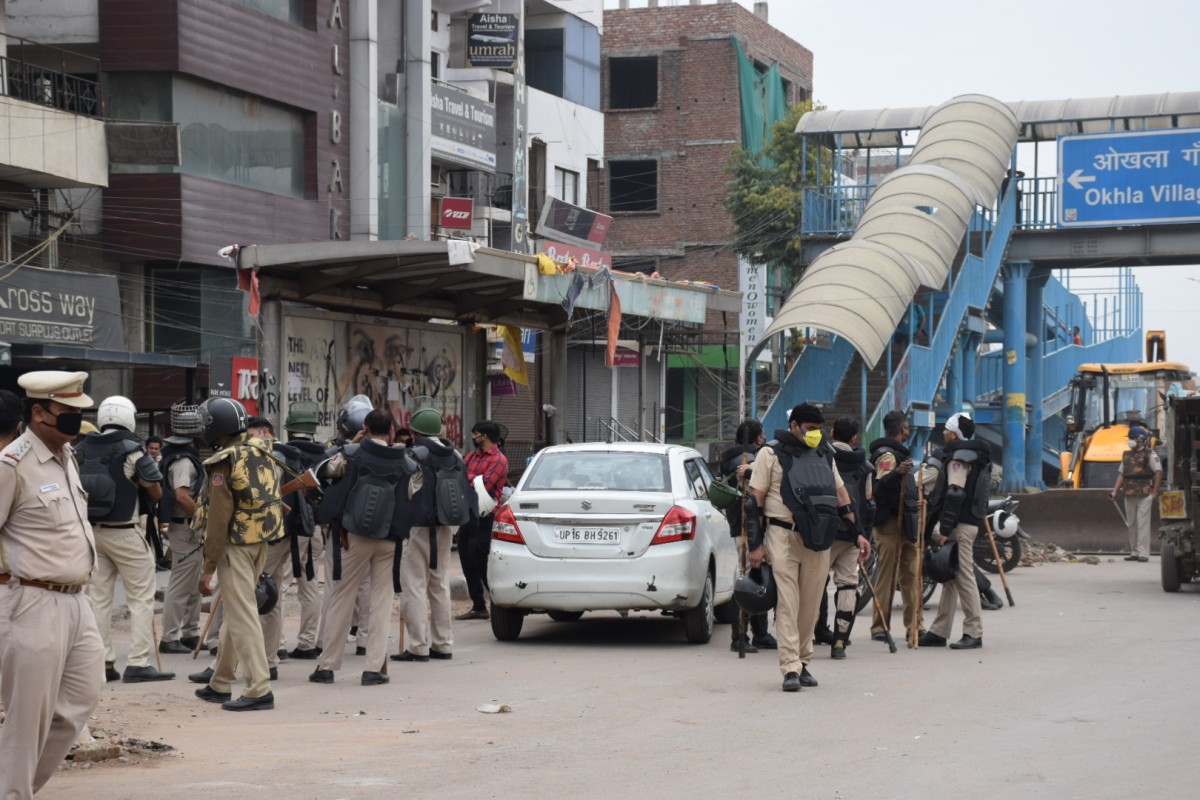 However, according to Jamai, the police didn’t “respect this mandate of the protesters.” He said, “Before the Janta Curfew ordered by the prime minister on Sunday, a meeting was held between the police and the protesters of Shaheen Bagh at India Islamic Culture building. The administration then ensured that they will not demolish any of the structures at the protest site. And they also allowed us to continue the protests symbolically, but this morning they went back on it.”

Also read: As Shaheen Bagh Fights, Where Are the Women of Aligarh?

He also said some of the protesting women were forcibly removed and detained. “Doing all this in the wee hours of the day, has done nothing but create panic among the people of Shaheen Bagh. This will only result in the gathering getting bigger and anarchy prevailing. In the wake of the coronavirus outbreak, this was highly irresponsible of the police.”

He also said that many states which had passed a resolution against NPR had done so because of the influence of the protest at Shaheen Bagh.

Afreen Jamal, a middle-aged housewife who had been part of the protest since it started said that the protest would still “continue in full force once the coronavirus outbreak is controlled.” She added, “We will not let our efforts go to waste. We have accomplished some things, but the fight is long,” referring to the demand for the revocation of the controversial CAA.

Since the protest has been removed, many elderly people in the locality have taken it upon themselves to control the youth. One such elderly man, seated on a chair said, “We are sitting here since morning. Every time we see a group being formed, we immediately ask for it to be broken up. The people of Shaheen Bagh are angry, somebody or the other from each house here was somehow a part of the protests. They feel dejected and the situation could get out of hand any moment. So, we, as elders, are sitting in different places and trying to keep people calm.” 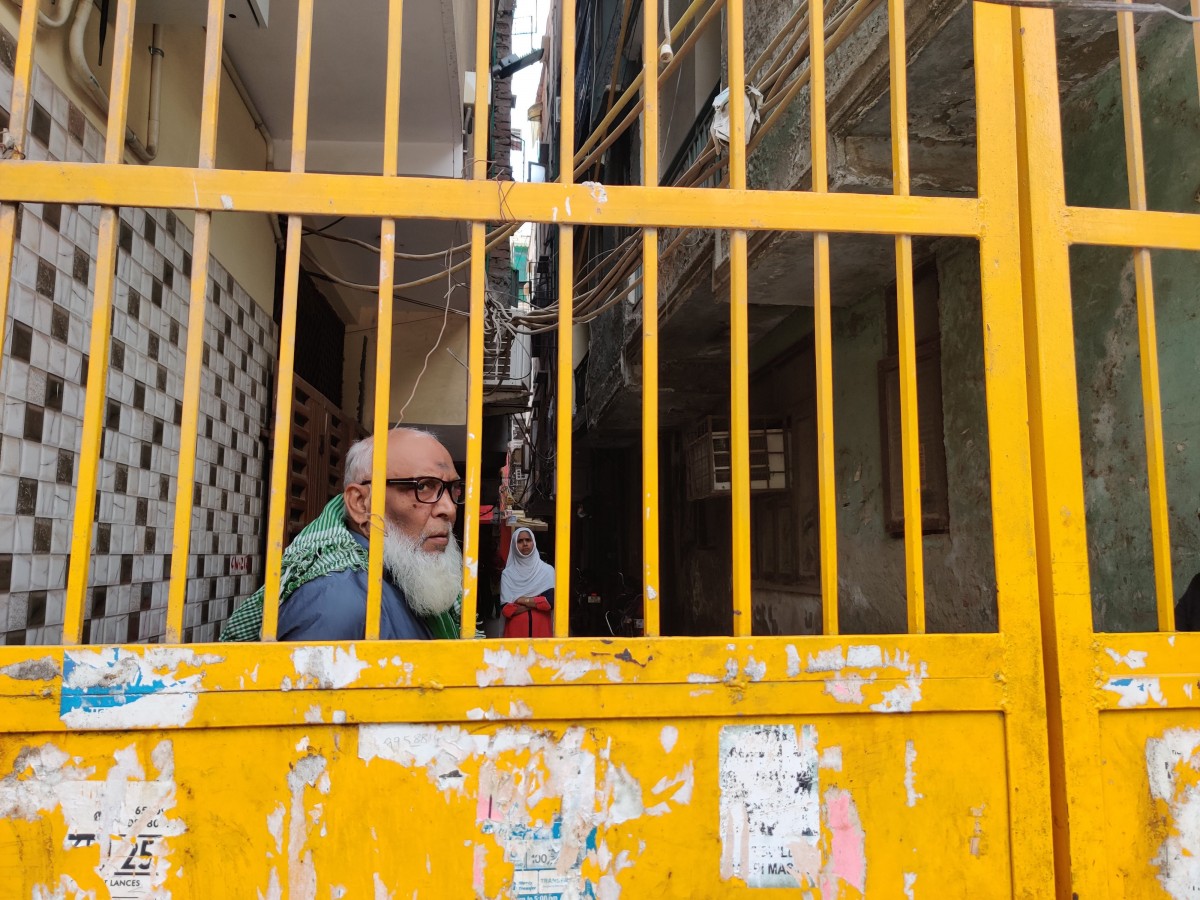 An elderly man is outside to “calm people” and make them understand that “it is for their own good.”. Photo: Ismat Ara

But there are mixed feelings amongst the people. Another elderly man standing outside the 40 foot road, one of the lanes near the protest site, said that the government had done a good job by removing the protest because it would help in controlling the outbreak of the coronavirus. “The women can come back again once the medical emergency is in control,” he added.

An elderly man was seen standing outside to keep people “calm” and make them understand that “it is for their own good.” At around noon, police officials told The Wire that the situation had been “controlled” and that there was no more any possibility of a clash in the area