"If we don't raise our voice, if we don't come out of our houses, how will the government know that we have an issue?" 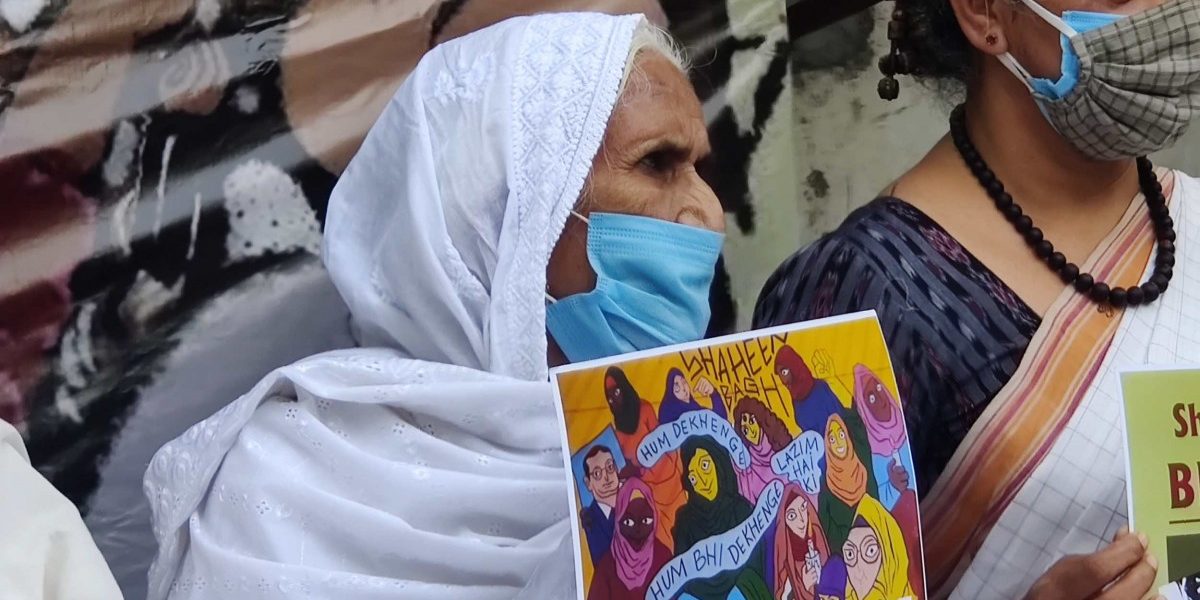 New Delhi: In a press conference organised by Saheli, People’s Union for Civil Liberties, National Federation of Indian Women and others on Tuesday, several women activists celebrated TIME magazines’s recognition of Bilkis Bano in its ‘100 Most Influential People’. At the same time, they condemned the Delhi Police’s investigation into the February riots and arrest of several anti-Citizenship (Amendment) Act protesters.

Subramanian said, at the beginning of the press conference, “Bilkis didi for many days has inspired a lot of women, and we are thankful to her for that. We salute her for her courage. In the past few months, coronavirus has taken over but before that [during the anti-CAA protests], there was an environment of hope. Citizens wanted to fulfil their constitutional duties by making the country better. They openly said that they are not okay with inequality. The movement against CAA was a movement towards an equal citizenship.” She also said that internationally, the anti-CAA protests are still considered to be completely non-violent and that in any other country, Bilkis would have been felicitated by the state.

In a conversation with Bilkis, Hameed asked, “I am your neighbour. I live in Tikona Park, and you in Shaheen Bagh. Even though there is little distance between our houses, there is none between our hearts. But tell me, you are an elder, and usually the elderly don’t go out much. But what was it that kept you hooked to the protest site during such cold?”

Bilkis Bano said, “This country is ours. We love our children and respect our elders. For this love for the younger generation, we kept sitting there.” Hameed further asked her, “How do you feel about getting this recognition on the international level?” Bilkis said, “Our fight now first is with coronavirus. Then we will take forward our conversation on NRC and CAA. The students who have been incarcerated should be released. How will they get educated behind bars? My wish is that they study and reach great heights in their lives.” She also talked about the ongoing farmers’ agitation across the country, the cases of starvation and increasing rate of suicides.

Bilkis further asked, “If we don’t raise our voice, if we don’t come out of our houses, how will the government know that we have an issue?” Hameed then added, “My organisation, Muslim Women’s Forum (MWF) formed in the year 2000, was made with the purpose to tell the world that Muslim women are strong and full of hope and strength, that they can play a big role in the future. You (Bilkis Bano) have carried forward the legacy of women like Bi Amma. You have proven that Muslim women are strong.” She also spoke about the several allegations levelled against anti-CAA protesters and said, “When women protest, people say all sorts of things like they are paid, and that they have hidden things in their burkhas. We as Muslim women will not accept this.”

She then quoted a couplet by Majaz,

She added, “We [Muslim women] will hold a flag in one hand, and also cover our heads. Bilkis Bano is an example of this.”
On this, Bano added, “Yes, [some] women want to stay at home, cook food, have kids and educate them.”

Annie Raja said that she would refrain from calling Bilkis Bano “dadi” [paternal grandmother] but instead would call her “comrade”. She said, “We are celebrating this international recognition of our comrade – and along with her, also the other women who participated in the non-violent anti-CAA protests in Shaheen Bagh. The belief that Muslim women don’t know anything is false. They have been part of our national freedom struggle and recently, they stood up to save the constitution when the country needed them. This passion should be celebrated.”

Talking about the recent arrests of anti-CAA protesters, she said, “The protests had been going on peacefully within the constitutional rights of people. But this is a fascist strategy to equate it with Delhi riots. I want to say to the Central government, stop criminalising peaceful protests by these women. We celebrate this recognition of Bilkis Bano but also condemn the Central government and the home ministry, which is using the Delhi Police to criminalise these women’s non-violent protests.”

Bhasha Singh, a journalist, said, “I would like to call her nani (maternal grandmother) instead of dadi. She is dadi, she is nani, she is an Indian woman, beyond the shackles of Hindu and Muslim. She is worried about students, farmers and the country as a whole. She doesn’t just want to save Muslims, but the whole country and its constitution. The country that is being divided by the divider in chief [referring to Narendra Modi] is being sewn together by Bilkis nani.” She also said that the media, including herself, has learnt a lot from Bilkis.

Poonam Batra, professor in the education department of Delhi University, said, “I feel lucky to be sitting next to Bilkis Bano, a symbol of the democracy in this country. Through these protests and Bilkis Bano, I have seen the immense amount of love for their country.” She also said that the real education was the one being imparted to children at the anti-CAA protest sites: about the constitution and their rights.

Bilkis Bano, in the end added, “We are with Hindus, Muslims, Sikhs and all others. Keep hatred aside, promote peace and love.”