Sex Workers Are Creating Awareness About Coronavirus, Even While Battling Other Problems

Even as the lockdown has meant loss of business for sex workers, they are using their experience in battling viruses such as HIV to create awareness. Chennai: At Theni in southern Tamil Nadu, Leela’s* schedule has been thrown into disarray after the announcement of the 21-day lockdown. “Not that I had a proper schedule before, but I was working and making money. This lockdown has made a mess of our lives,” says the 31-year-old sex worker.

Yet, Leela has not allowed the lockdown to defeat her. Every day for the past fortnight, she has been calling people in her own community, people who visit her and everyone on her contacts list to tell them about the coronavirus. “Every day, I make about eight-nine calls, mostly to other workers. I tell them about how to wash their hands properly and about social distancing.” Sometimes, Leela goes to the shops close by and tells customers waiting to buy things to ‘maintain a good distance.’ “I also tell the shopkeepers to not encourage crowds, lest it would turn fatal to him,” she says.

Leela is among the many sex workers across the state who are trying to create awareness about the viral infection. Sex workers are using their experience in creating awareness about HIV and other sexually transmitted diseases in their own community to do the same about the coronavirus. Organisations like South Indian AIDS Action Programme (SIAAP) in Chennai have trained some sex workers on the measures to be taken to contain the spread of the coronavirus, identification of symptoms and suggestions on immunity boosting food items.

They had started creating awareness before the fear of the virus gripped the nation. “I have been doing it for more than 15 days, much before the janata curfew,” Leela says.

In Madurai, 33-year-old sex worker Maya* has many issues to grapple with. But she is also making videos to make people aware of the coronavirus and has been sending it to WhatsApp groups that she is part of. “The moment I knew there was this contagious virus, I stocked my place with handwash and Dettol soaps,” says Maya. She started insisting that the men who visit her use it adequately. “Some were angry, but I explained how it was important not just for me but for themselves too.”

“Sex workers have been at the forefront of halting the spread of pandemics,” says Shyamala Nataraj, executive director of SIAAP, pointing to the effective handling of the HIV/AIDS epidemic in India and elsewhere. “In India when HIV was first identified, sex workers were targeted as reservoirs of the infection. There were raids, arrests, many were locked up and discriminated against. Slowly, government policies began to see them as agents to protect themselves and others. Sex workers were supported in exercising their capacity to help themselves and others. The HIV infection in the country went down most noticeably and most quickly among sex workers. Today, prevalence rates among sex workers are the lowest compared to rates in other vulnerable populations,” she said.

Nataraj says that sex workers are also at the forefront of battling the COVID-19 pandemic. “Through community-based organisations, they are spreading awareness. They have taken ownership of civil society to do their bit to prevent the spread of disease,” she says.

However, Maya has pressing concerns for the lockdown period. Like daily wage labourers, she lives hand-to-mouth and there is no work coming by now. “This morning, my landlord berated me for not paying the rent. How could I pay?” she asks. Because she is a single woman and the stigma attached to sex work, Maya has not been able to procure a ration card – a necessity to claim the benefits announced by the state government, such as supply of rations and an allowance of Rs 1,000. “How am I supposed to live the next few days?” she asks. 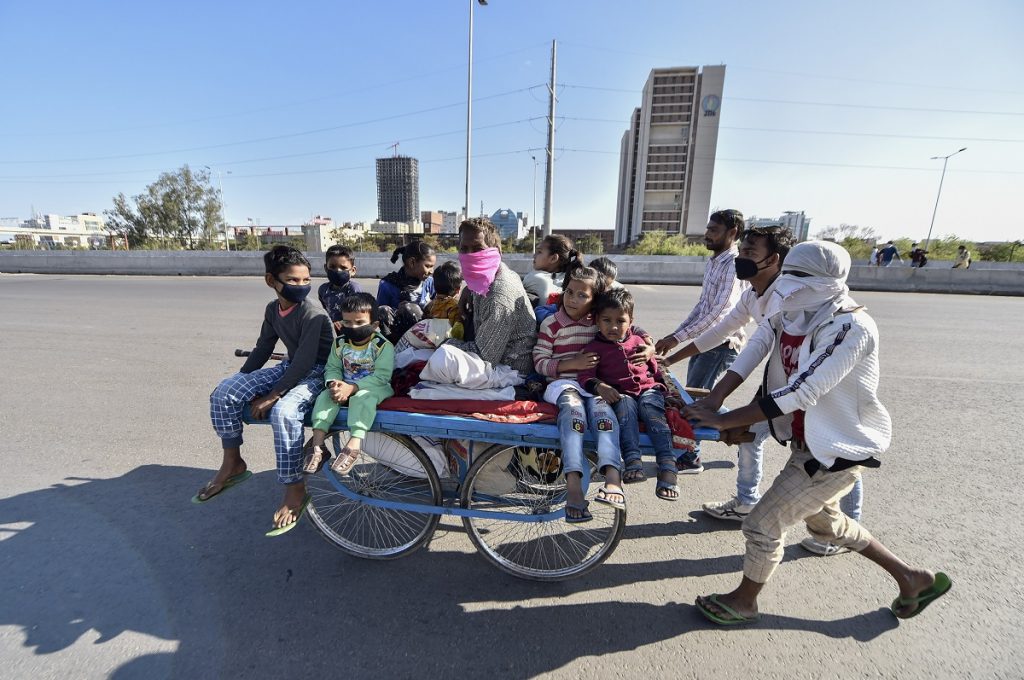 Ram Avtar and his family walk along with other migrant workers to their native places amid the nationwide lockdown on the NH24 near Delhi-UP border in New Delhi, March 27, 2020. Photo: PTI/Ravi Choudhary

K. Swaminathan, programme director of SIAAP, says that to avail relief measures announced by the government, one needs ration cards or unorganised sector ID cards. “Most sex workers don’t have these cards. They also cannot reveal their status and their source of income to claim these relief measures due to the stigma associated with sex work,” he says.

Veena*, an office bearer of the Vaadamalar AIDS Thaduppu Sangangalin Kootamaippu [Vaadamalar (meaning evergreen flower) Federation of community based organisations working for prevention of AIDS] observes that more than half of the sex workers in Tamil Nadu do not have ration cards. Most sex workers are also finding it hard to access medical facilities, including for some, getting their quota of ART tablets that are used to treat HIV. “We can get it only from the ART centres at Government Hospitals. But since a person who tested positive for the coronavirus died in Madurai, we have not been able to visit the hospital. The tablets are given to us once in three months. For those who are running out of tablets, it is going to be difficult.”

Even for those who have the tablets, there are other concerns, says Leela. “The tablets require you to consume nutritious food. How many can afford it now? Most of us cannot afford a square meal.”

According to Janani Venkatesan, project officer of SIAAP, the pandemic has taken a huge toll on the business of sex workers since their work involves contact between humans. “There is loss of income, which means there is a scarcity of food for themselves and their families. Many also have to pay off loans and or pay rent for their homes,” she says.

A large population of sex workers live alone and have no financial or social support, she adds. The lockdown could also have an impact on the health of sex workers who need to regularly access services for sexual and reproductive health. “Those who are HIV positive cannot especially afford to miss their ART medication. Sex work is also not recognised as work, so there is no possibility for relief to compensate wages. Even after the lockdown, sex workers will not get brisk business due to the fear of transmission.”

Pointing out that the women are prone to domestic violence or intimate partner violence during the lockdown, when they are staying at home for an extended period of time, Dr Swaminathan says this might result in stress and other mental health issues. “There must be a response plan from the government”, he adds.

Arundhathi Gosh of Sangama has started a crowdfunding campaign with a target of Rs 20 lakhs, which they hope will support the sex workers in Karnataka for two months. “We plan to provide Rs 2000 per sex worker, including transpersons,” says Nisha Gulur, vice president of NNSW. The organisation, which has a presence in eight states, says the lockdown has sent a wave of panic among sex workers. “Our priority had been to advise sex workers not to work, at any cost. In Maharashtra, where they have brothel-based sex work, this is easier. In other states, we are doing our best. We are trying to reach those who do not have smartphones by word of mouth. In Maharashtra again, sex workers have been able to support each other since they live in a locality, in terms of rent and ration. Elsewhere it is not possible, that is why we need to raise funds,” she says.

*Names of the women have been changed to protect their identities.