Sedition Charges Against Amnesty India After Chaotic Meeting on Kashmir 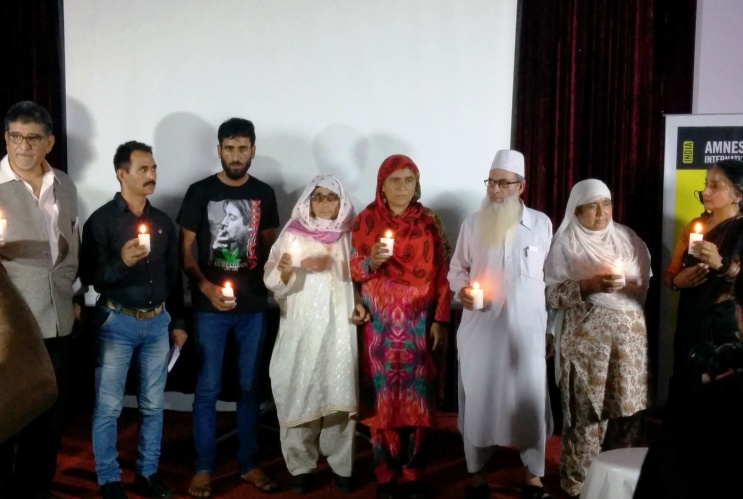 Participants at a meeting on Kashmir organised by Amnesty International India in Bengaluru. Credit: Amnesty website

On Independence Day, the Bengaluru police filed sedition charges against Amnesty International India after “azaadi” slogans were raised by some Kashmiris at an event organised by it at United Theological College on Saturday. The slogan shouting took place soon after former journalist and Pandit leader from Jammu and Kashmir R.K. Mattoo spoke highly of the Indian army.

The event, titled “Broken Families”, was organised by Amnesty India as part of a campaign to seek justice for human rights violations in Jammu and Kashmir. “The event involved discussions with families from Kashmir, who were featured in a 2015 report, who had travelled to Bengaluru to narrate their personal stories of grief and loss,” the human rights organisation said.

In his response to the developments, executive director of Amnesty International India Aakar Patel said: “Merely organising an event to defend constitutional values is now being branded ‘anti-India’ and criminalised. The police were invited and were present at the event. The filing of a complaint against us now, and the registration of a case of sedition, shows a lack of belief in fundamental rights and freedoms in India.”

In a statement on its website, the organisation said “as a matter of policy” it does not take any position in favour of or against demands for self-determination. “However, Amnesty International India considers that the right to freedom of expression under international human rights law includes the right to peacefully advocate political solutions, as long as it does not involve incitement to discrimination, hostility or violence.”

Referring to a report put out by news website, The News Minute  Amnesty International India said the FIR has been filed on a complaint by ABVP and “mentions a number of offences including ‘sedition’, ‘unlawful assembly’, ‘rioting’ and ‘promoting enmity’.”

As per The News Minute report, the programme went of peacefully initially “while members of the audience listened quietly to the testimonies of people whose family members had disappeared”. However, “arguments began when Mattoo said that the Indian Army was very disciplined. Some of the members of the audience took objection to these remarks. Slogans pro and against the army presence in Kashmir were raised. Later on, people also raised slogans for ‘azaadi’,” the news report said.

In response to ABVP’s demand for action against the “anti-nationals”, the Karnataka Home Minister was quoted as saying that “some information is that they may be refugees residing here, but what was their intention, who provoked them, why did they do it, needs to be inquired into.”

Amnesty said among those who spoke at the event were the family of Shahzad Ahmad Khan, one of the men killed in the Macchil extrajudicial execution, where five Army personnel were convicted and sentenced to life imprisonment.

It claimed that Bengaluru Police were informed about the event well in advance. “Amnesty International India also invited representation from the Kashmiri Pandit community in Bengaluru at the event to speak about the human rights violations faced by members of the community. Towards the end of the event, some of those who attended raised slogans, some of which referred to calls for ‘Azaadi’ (freedom).