SKM spokesperson and farmer leader Balbir Singh Rajewal appealed to supporters and others to raise black flags at their houses, vehicles and shops on May 26. 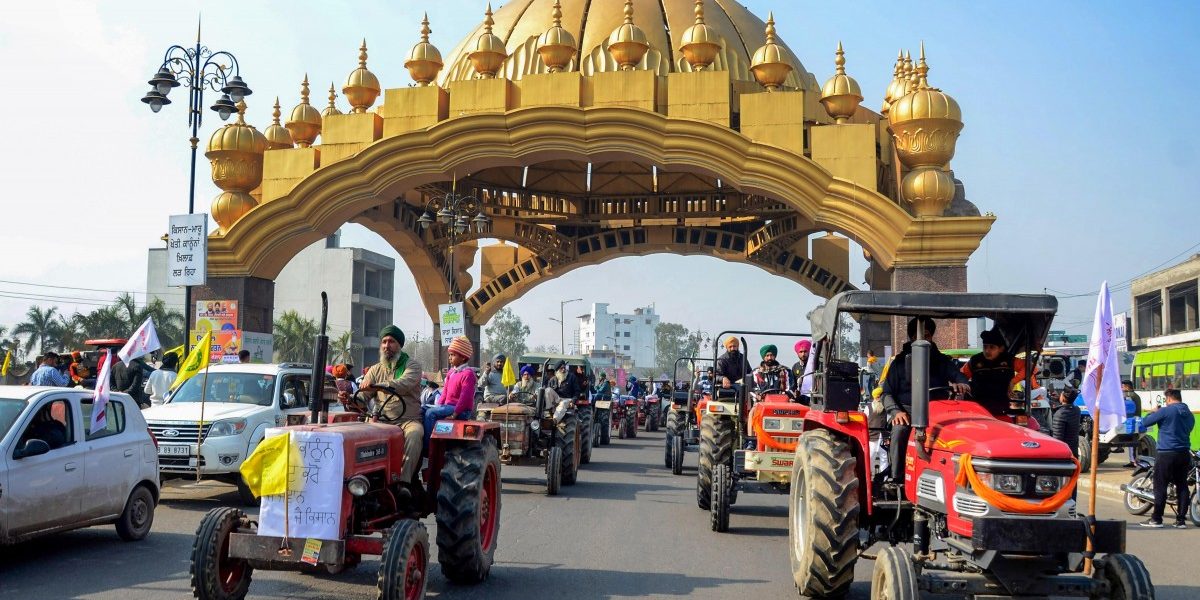 Farmers take part in a tractor rally as they protest against the new farm laws, during their Kisan Gantantra Parade, on the occasion of 72nd Republic Day, in Amritsar, Tuesday, Jan. 26, 2021. Photo: PTI

New Delhi: Even as the Union government is facing widespread criticism over its poor handling of the coronavirus pandemic, the Samyukt Kisan Morcha (SKM), an umbrella body of over 40 farmers’ unions, has now turned up the heat on Prime Minister Narendra Modi. To mark six months of their protests at the Delhi borders against the three controversial farm laws, the SKM, along with the central trade unions, will observe May 26 as “black day”.

Modi had first taken oath as the prime minister on May 26, 2014. In the last six months, the SKM has kept its ante up, and has claimed that it will not stop protesting unless the government repeals the farm laws. The central trade unions have also pitched in to support SKM’s call as they had also observed an all India strike on May 26 last year.

Announcing its decision, SKM spokesperson and farmer leader Balbir Singh Rajewal appealed to supporters and others to raise black flags at their houses, vehicles and shops on May 26.

“We will also burn effigies of (Prime Minister) Narendra Modi as a form of protest,” he said. Some observers think that the May 26 protest is yet another effort by the SKM to push the government to begin talks with the farmers. Until now, all negotiations have ended in an impasse, with the government maintaining that the laws are pro-farmer in nature, while the SKM wants them to be repealed.

Also read: The Protesting Farmer Is Caught Between the Devil and the Deep Blue Sea

Joining the SKM’s call, the central trade unions said in a statement, “The call to observe that day as a ‘Black Day’ is because the Modi government that has been in office continuously for the past seven years has not only failed to deliver on the tall promises made while assuming office, but is actually acting against the wishes of the toiling people with impunity.”

“It has simply disowned its responsibility in tackling the Corona pandemic and asked the states to provide medical help to the bewildered population: shortages of vaccine doses, oxygen, hospital beds, even cremation facilities are alarming, with irresponsible announcements of vaccinating the 18-44 age group, only to be withdrawn subsequently, shows that the government is completely in the dark about what needs to be done in this hour of grave crisis,” it added.

The unions said that the government has used the pandemic to “to push through legislations that are tailored only for the benefit of the corporates, be it the three farm laws or the four labour Codes or privatisation of everything in the government or public sector.”

They said that the government should mobilise resources for the migrant workers, unemployed and frontline workers to save them from further penury and vulnerability.

“While the government has no funds to tackle the COVID-19 pandemic, it is shamelessly going ahead with the “Central Vista Project”, costing Rs 20,000 crore, supposedly to rebuild a new parliament building, floating non-transparent funds such as PM-CARES, electoral bonds, while in practice behaving in the most undemocratic way – for example, arresting anyone for criticising the government, refusing to hold tripartite consultations, blatantly using constitutional agencies to frighten and browbeat any opposition, as seen from the use of the CBI, ED, NIA, Supreme Court, RBI, Election Commission, state governors against political opponents, engineering defections and undermining elected state governments with the use of money power and use of these agencies,” the central trade unions’ statement said.

As a measure of solidarity, the central trade unions also said that it will ask their supporters to put up black flags in their houses and vehicles.