Sajad Lone 'Released' After a Year's Detention, 'Asked Not to Leave Home Till Aug 5,' Say Reports

Released five days before the anniversary of the Article 370 move, Lone tweeted, 'This was psychologically draining.' 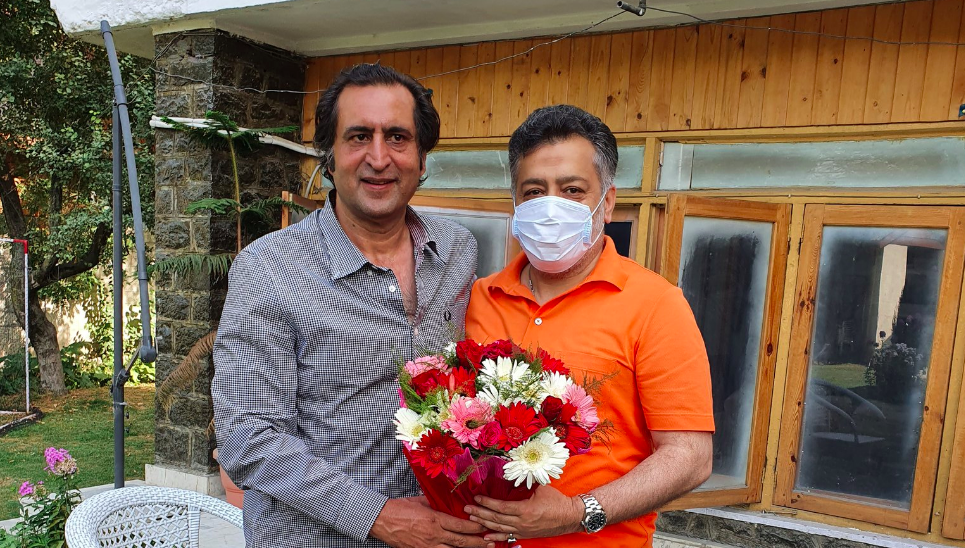 A man identified on Twitter as JKPC general secretary Imran Ansari with with JKPC chairman Sajad Lone, after the latter was released from detention. Photo: Twitter/@firdousislam999

Srinagar: Jammu and Kashmir Peoples Conference (JKPC) chairman Sajad Gani Lone was on Friday informed that he has been released after nearly a year-long detention. Reports have said that he has been asked to not leave his house until after August 5.

Lone’s release comes days ahead of the completion of a year of the Centre’s move to read down Article 370 of the Constitution in August last year.

His release also comes on a day when the government of the J&K Union territory is tackling heavy criticism for lying in the Supreme Court over the detention of senior Congress leader Saifuddin Soz. Soz scaled the boundary wall of his Srinagar house to “prove” that he was not a free man but that he had been kept under “illegal house detention” a day after the government said to the apex court, “He was never detained nor (is he) under house arrest.”

Lone confirmed his release by taking to Twitter. He did not comment on the nature of his release.

Finally 5 days short of a year I have been officially informed that I am a free man. So much has changed. So have I. Jail was not a new experience. Earlier ones were harsh with usual doses of physical torture. But this was psychologically draining. Much to share hopefully soon.

Taken into detention just before the Centre announced the Article 370 decision, Lone, a former cabinet minister in the PDP-BJP coalition that gave away in 2018, was kept at the makeshift jail at Centaur hotel on the banks of the Dal Lake.

Later, with other leaders from Jammu and Kashmir’s mainstream parties, he too was moved to MLA hostel in Srinagar.

This transfer had created furore after PDP chief and still-detained former chief minister Mehbooba Mufti’s daughter Iltija alleged that Lone had been among leaders who were manhandled during the process.

“Police manhandled them & roughed up Sajad Lone (Peoples Conference chairman), Waheed Para (the PDP youth president) & Shah Faesal (bureaucrat-turned politician),” Iltija tweeted. “Is this how you treat elected representatives? Why humiliate them? J&K is under martial law & police seem be inebriated with power.”

The same Waheed Para whose work for strengthening democracy in J&K was lauded by former Home Minister Shri Rajnath Singh.The very same Shah Faesal who was called Kashmir’s role model when he topped UPSC exam. Once appreciated & now humiliated. Why?

She said that Lone had been particularly treated disrespectfully.

Manhandling started when Sajad Lone was repeatedly frisked & asked to undress. New jail windows are blocked with wood,lacks heaters & has surveillance jammers. If a man who PM Modi called his younger brother is being humiliated like this, imagine plight of others

Along with Mufti’s daughter, many believe that Lone had been a supporter of Modi when there was little of the now palpable wave of popularity for the prime minister. In 2018, he had staked claim to form the government in Jammu and Kashmir, with BJP’s support, after the dissolution of the BJP-PDP government.

Then governor Satya Pal Malik had courted quite the controversy by saying that had he “looked to Delhi,” he would have had to “install a government led by Lone, and history would have remembered [him] as a dishonest man.”

The JKPC chairman was moved to his residence in Srinagar in February this year and placed under house arrest. PDP leader Waheed Parra was also moved home on the same day.