On Friday, Radhika Vemula, Abeda and Salim Tadvi and Fathima Nafees said they would hold a nationwide rally against the CAA. 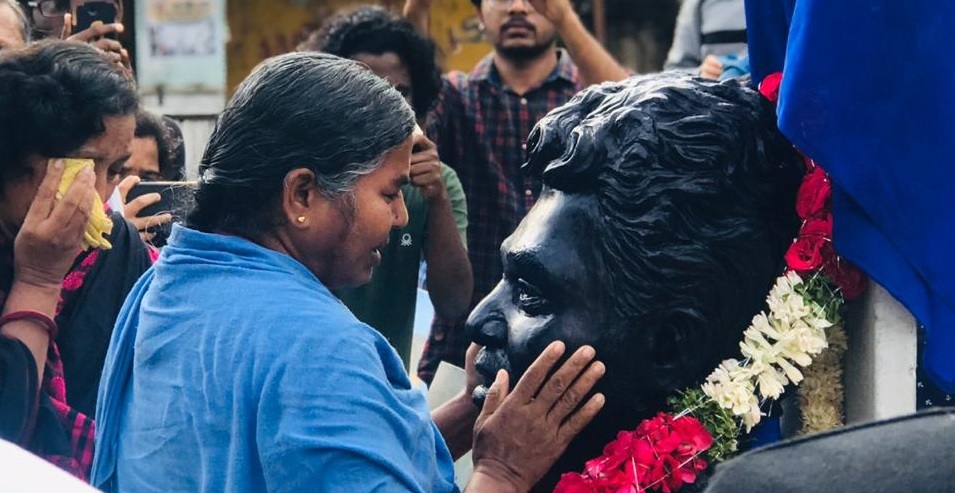 Radhika Vemula with a bust of her son Rohith Vemula. Photo: Hamna Naseer 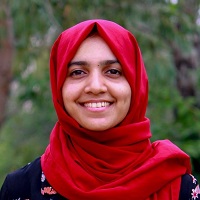 Hyderabad: Radhika amma threw her arms around the bust of Rohith Vemula, trying to remember how it felt to touch her son, whom she lost four years ago. She was visibly broken, yet trying to give the students of University of Hyderabad (UOH) all her strength and support to take the fight for social justice, one which began with the death of her son four years ago on January 17, forward.

Radhika Vemula, along with Abeda and Salim Tadvi, parents of Dr Payal Tadvi, were let into the UOH campus after a thorough security check for the ‘Rohit Shahadath Din’, an event conducted by the Ambedkar Students’ Association (ASA) on Friday.

Also Read: My Birth is My Fatal Accident: Rohith Vemula’s Searing Letter is an Indictment of Social Prejudices‬

Radhika amma first went to the Velivada, a structure that Rohith and with four other Dalit students stayed in while they were suspended from the hostel in December 2015 by the UOH administration. Velivada in Telugu translates to a Dalit ghetto. She garlanded the bust of her son, followed by Abeda and a few others. Amidst the crowd that had gathered, the two mothers broke down, remembering their children’s demise, which many have blamed on institutional caste discrimination within places of higher education.

After chanting few slogans, the students along with Radhika Vemula rallied towards the DST Auditorium, where other speakers like Yogendra Yadav, professor K. Laxminarayana and advocate Bheem Rao also joined. 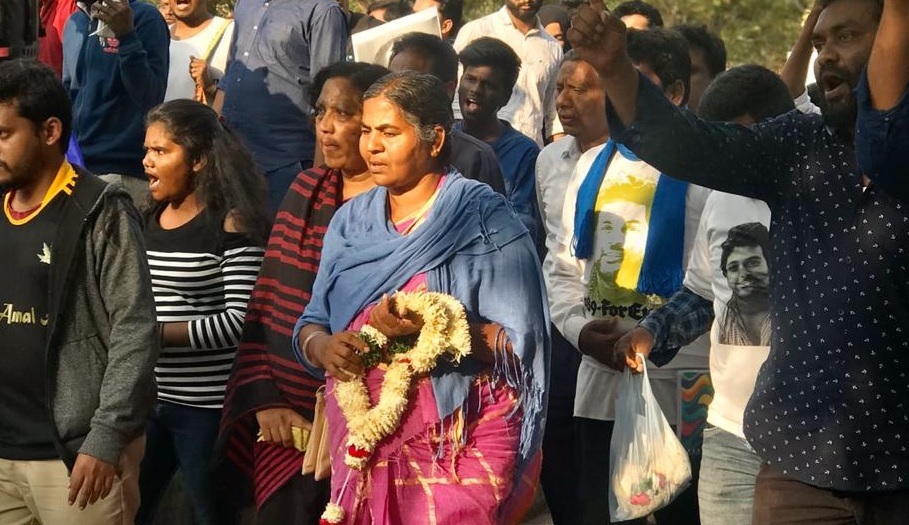 While others spoke about the spectre of caste that is still pervasive in the society, Radhika Vemula and Abeda provided instances of caste discrimination which led to the deaths, institutional murders as they call it, of their children. “They shattered our hopes. And they keep shattering the hopes of others, it hasn’t stopped. Institutional murders like Rohith’s continue in our country,” said Radhika Vemula.

At an earlier event, Radhika Vemula announced that together with Payal Tadvi’s mother Abida and JNU student Najeeb Ahmed’s mother Fatima Nafees would launch a ‘Mothers for the Nation Yatra’ as a nationwide campaign against the Citizenship (Amendment) Act tour.

Payal Tadvi was a student of the BYL Nair Hospital in Mumbai, when she took her own life in May last year. In a letter, she accused her senior of caste discrimination. Tadvi hails from the marginalised Bhim Muslim tribal community. Najeeb Ahmed, a JNU student, has been missing since October 2016.

Radhika Vemula described the CAA as an attempt by the Narendra Modi government to make the country a Hindu rashtra. “I have been struggling for the past four years. I still stitch clothes to survive. After watching all these student protests in JNU, my blood is boiling again. Let Modi and Shah prove where they come from first. In any case, we should not tolerate this,” she said, according to The News Minute. 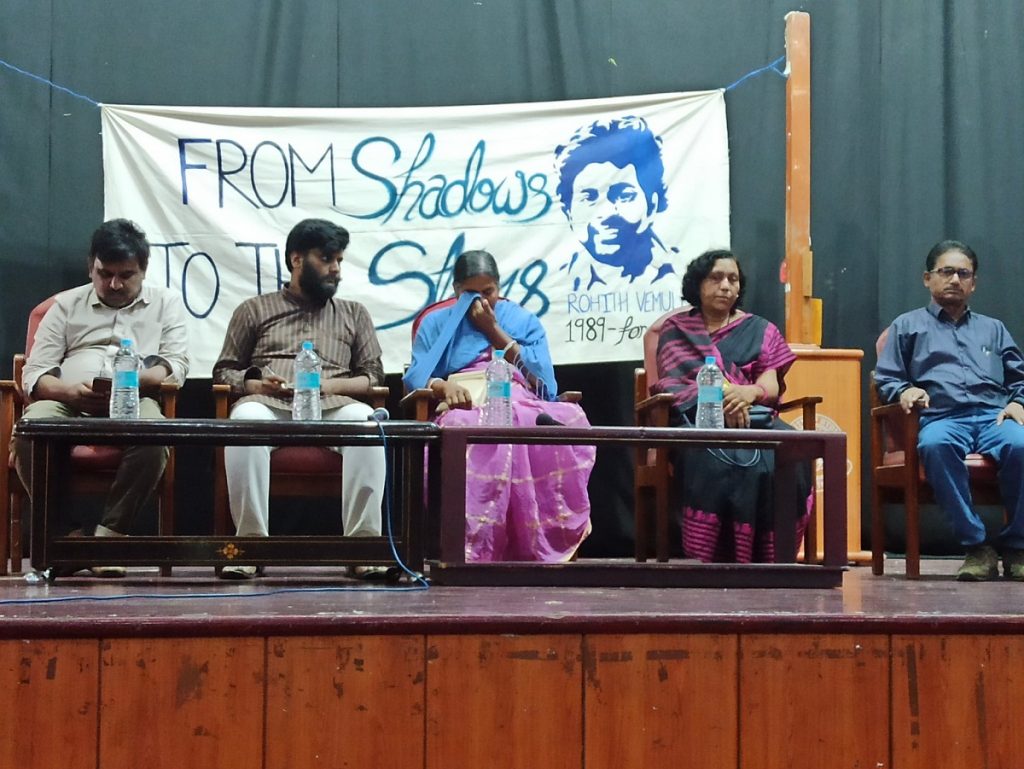 Dontha Prashanth, a PhD scholar who was also suspended from the hostel along with Rohith Vemula, said the Justice for Rohith Vemula movement will not stop. “In these four years, casteist forces or those in power tried to subvert or dilute the movement through different forms of harassment. But the movement has proved that the spirit of resistance can’t be stopped,” he said.

Iniyavan, a PhD scholar who is also the president of ASA, said that Rohith Shahdath Din is that time of the year when students who believe in equality, self-respect and social justice join hands. “Especially, Dalit Bahujan students who have rejected victimhood and are committed to taking forward the caravan of Babasaheb. It is also that time of the year when Savarna anxiety is shaken by the bitter reality that Caste exists,” Iniyavan said.

Ahmed is a first-year student of MA Philosophy at the university. He was not on campus when Rohith died in 2016, but was among many new students who were expressing their solidarity with the movement. “It was the Rohith movement that made me politically active. I couldn’t take in what had happened in UOH, couldn’t see the callous behaviour of vice-chancellor P. Appa Rao and the Ministry of Human Resources Department. As a student, watching Radhikamma’s tears hit me hard in the gut. But she then led the rally and showed us that we will not forsake the struggle,” he says.

While Rohith Vemula’s death sparked massive student movements across the country against the caste atrocities, especially in institutes of higher education, more instances of students taking their own lives have been reported. University campuses still continue to face caste or religion-based discrimination. Recently, Fathima Latheef, a young Muslim student from IIT Madras, took her own life and accused professors of religious discrimination.

In universities, students are also fighting against fee hikes, implementation of reservation and welfare measure for marginalised students. But as commentators have observed, Rohith Vemula has emerged as a symbol of resistance for student movements across the country.

Hamna Naseer is currently pursuing her Master’s in Communication at the University of Hyderabad.