'How Can a Human Being Be Illegal?': Lawyer for Rohingya Questions India's Deportation Plans

A large number of Rohingya refugees have been detained over the last month and the threat of deportation looms over them. New Delhi: Indian authorities are preparing to deport Rohingya refugees currently lodged in detention centres made for undocumented migrants. Close to 300 Rohingya were detained across India just in the month of March 2021.

In 2017, thousands of Rohingya people had fled Myanmar, either by foot or sea, after the Myanmar army’s targeted violence against the community. However, the Rohingya had been fleeing Myanmar to take shelter in neighbouring countries including India for years before that too.

Now, the detentions are at an all-time high. According to Delhi-based Sabber Kyaw Min from the Rohingya Human Rights Initiative, this rate of detentions in such a short span of time has not been seen before.

It all began on March 6 in Jammu, when about 200 Rohingya were sent to a detention centre to facilitate their deportation. Another 71 Rohingya who had come to Delhi to protest against plans to deport them and seek protection were also detained from near the UNHCR (UN High Commissioner for Refugees) building.

According to Sabber, 12 more Rohingya from Madanpur Khader and Sharm Vihar camps were detained on March 24 in Delhi. One of them was pregnant. On March 31, a family of four was detained from the oldest Rohingya refugee settlement in Delhi near Kalindi Kunj; two of them were above the age of 60.

Deporting the ‘most persecuted minority’

The Rohingya have been described by the UN as the world’s “most persecuted minority”, and action against the community by the Myanmar military has been described as “ethnic cleansing”. With the Indian government’s strict policies on immigration and refugees, close to 40,000 Rohingya who had looked to India for protection are now in limbo. As fear among the Rohingya rises, several human rights organisations and lawyers have stepped in to stop the deportations, which they say go against the fabric of the Indian constitution.

Also read: Amidst Turmoil, India Deports Rohingya Minor Whose Parents Are in Bangladesh to Myanmar

On August 8, 2017, the Ministry of Home Affairs issued a notice to all states and union territories in the country saying that Rohingya “illegal migrants” must be identified and deported without delay. Till 2017, Fazal Abdali, a 31-year-old advocate, says that Rohingya were being given visas and were recognised as refugees even with no permanent address proof.

Abdali is currently handling a total of 15 cases across Jammu, Patna, Ranchi, Delhi and West Bengal involving more than 100 Rohingya, trying to get a stay on their deportation. He has been working as a senior legal consultant at the Human Rights Law Network since 2013. Abdali has been instrumental in getting at least 25 Rohingya out of detention centres and helping them receive “refugee” status in India.

He says that he realised the importance of providing legal support to “refugees”, including Rohingya, after he saw the sub-human conditions that they were living in while conducting a fact-finding on the living conditions of the Rohingya in Mewat, Haryana. Besides legal intervention by representing Rohingya people at district courts, high courts and the Supreme Court, his work also involves conducting awareness sessions for the Rohingya and fact-finding missions on their conditions. 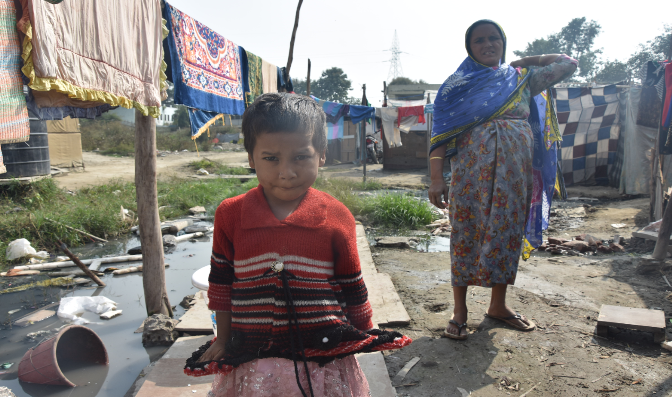 A child sits near her settlement in a Rohingya camp in Delhi. Photo: Ismat Ara

Explaining the process of his work, Abdali says, “There are multiple things. For example, if they (the Rohingya) have been detained and kept in the detention centres, we immediately move the high court to file a writ in their name to get them released from detention. Secondly, sometimes when there is a deportation threat, then we move the Supreme Court against the state’s orders.”

When there is a detention order, Abdali’s organisation tries to challenge that. Detentions are of two kinds, Abdali says. “When the police arrest them, they produce them in court. But when the FRRO (Foreigners Regional Registration Office) gets involved, we sometimes don’t get a chance for a trial. They directly take you to the detention centre and decide your fate there.”

Once a Rohingya is detained by the FRRO and sent to a detention centre, a long process follows. “Permission will be granted to you after writing an application about the person who has been detained. On the same day of getting the permission, the lawyer has to visit the client, interview them and get relevant information and file writs afterwards,” he tells The Wire.

“These writs are filed on an urgent basis. Because once deported, there will be absolutely no protection and the person sent back can be persecuted,” he says. According to him, in 2019, close to 15 Rohingya were deported from India.

The Rohingya do not want to go back to Myanmar. “We will be killed if we return,” says Sabber, who had escaped Myanmar through a rough route to finally reach India in 2008. His family – his mother, father and sister – is still stuck in Myanmar. “They were burning us to death back there. My family sent me because I was the only one who could manage such a long journey, my parents were old and my sister was weak,” he says.

Now, he is fighting a case to get protection for himself and his wife, also Rohingya, and their children in India. He hopes that the Indian government will not send him and his family back to the place he escaped due to a threat to his life.

‘How can a human being be illegal?’

The worst part about the sudden detentions, Abdali says, is that these people were constantly in touch with the local police as well as the FRRO, and were fully cooperating with them.

But why are these people being detained anyway? “It is most likely being done to give a loud and clear message that Rohingya don’t belong here. Earlier they [Indian authorities] used to honour their [the Rohingya’s] UNHRC cards, but not anymore. But if you see the long-term requirements for a visa, one of them is a UNHRC card. On one hand, they are refusing to honour the UNHRC cards and on the other they require it to provide visas,” Abdali says.

He filed a petition in the Supreme Court in 2018 for 62 refugees and asylum seekers registered by the UNHCR in India, who were languishing in jails and shelter homes after having served their full sentences. A notice was issued to all the states. The counter affidavits by the state and Union on the matter are yet to be filed. 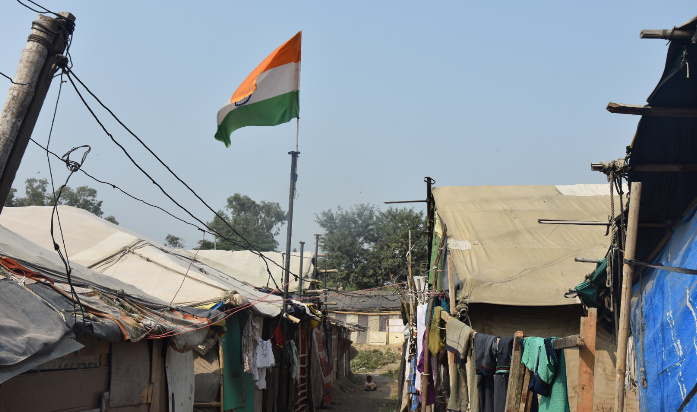 An Indian flag in a Rohingya camp in Delhi. Photo: Ismat Ara

The controversial Citizenship (Amendment) Act (CAA), which was passed by parliament in 2019, only made things only, he says.

“The detentions in India have a deterring effect on the Rohingya. They are now afraid to enter India because they fear that they will be sent back. The people who safely managed to come to India from Myanmar are now reliving their tough times back home because of the fear that they will be sent back.” The CAA provides a pathway to Indian citizenship for persecuted religious minorities from Afghanistan, Bangladesh and Pakistan who are Hindus, Sikhs, Buddhists, Jains, Parsis or Christians. However, the Rohingya, who are Muslims, are not eligible to seek Indian citizenship under the CAA despite being a persecuted community.

Abdali says that often, fighting for the cause of the Rohingya invites wrath against him. He tells The Wire, “I feel content about defending the refugees’ rights under the Constitution. However, it comes with a lot of outrage from a lot of people; even my close ones ridicule me for representing or advocating for the Rohingya.”

Being Muslim, he says, is another challenge. “Having a Muslim name and fighting for this cause is not convenient. People who have grown up with you will start questioning your nationalism just because you want to support refugee rights, which qualifies as a basic human right,” he says. He recalls an incident where a police officer once threatened him for taking up such cases: “A police officer said that people like me [Muslims] would only take up cases such as that of the Rohingya. ‘Try and fight hard, but we will throw you all out one day,’ [he said].”

“The word ‘illegal’ in itself is evil and fundamentally wrong. How can a human being be illegal?” Abdali asks. “There can be irregular migrants or undocumented migrants, not illegal human beings.”