The most dangerous threat for a republic is not always one that comes from external aggressors, but one that reinforces the tyranny of the powerful.

Farmers take part in a parade to support the farmers protesting at Delhi borders in Bengaluru, January 26, 2021. Photo: PTI/Shailendra Bhojak

By January 16, 2021, 70 farmers had died while participating in protests at the borders of Delhi.

Reporters often ask farmers, especially those who are older, why they continue to risk their lives in this manner. This has been, after all, an exceptionally cold winter in North India, and there are limited medical facilities at the protest sites.

The farmers respond by saying that they don’t have a choice. They will simply die, they say, if these laws remain in effect. They will not be able to sustain themselves.

Senior Advocate Dushyant Dave echoed this thought in a recent interview. Explaining the immense significance of the Agricultural Produce Market Committees (APMCs or mandis), Dave said, “If you leave them with the market forces, the farmers will not get remunerative prices and they won’t even get the cost of their production. They will die and that’s their fear.”

The government’s unabashed support of deregulation in favour of large corporations is evident to everyone. While it is undoubtedly true that the current struggle over profits from agricultural produce is specific to our time, the time of late capitalism, it nevertheless also replays, albeit in a specific form, a conflict that can be traced back many centuries. We could perhaps say that this is a conflict between those who wish to turn the law into an instrument of domination and those who want the law to equalise the unequal. We miss the historic significance of the farmers’ protest if we do not place their protest in this long history.

Media discourse in recent days has repeatedly accused the farmers of taking a “hard line”. This phrase started circulating after the government offered to put the laws on hold for 18 months. For many people, especially in urban areas, this seems a clear enough sign that the government is willing to re-think its stance. Why then do the farmers continue their protest? Such questions show us that large parts of the urban middle and elite classes have simply failed to acknowledge the enormity of the crisis.

If thousands of farmers have been camping in difficult conditions for almost two months now, in the midst of a pandemic, and even in the midst of death, bereavement and mourning, surely there must be something absolutely vital at stake for them. 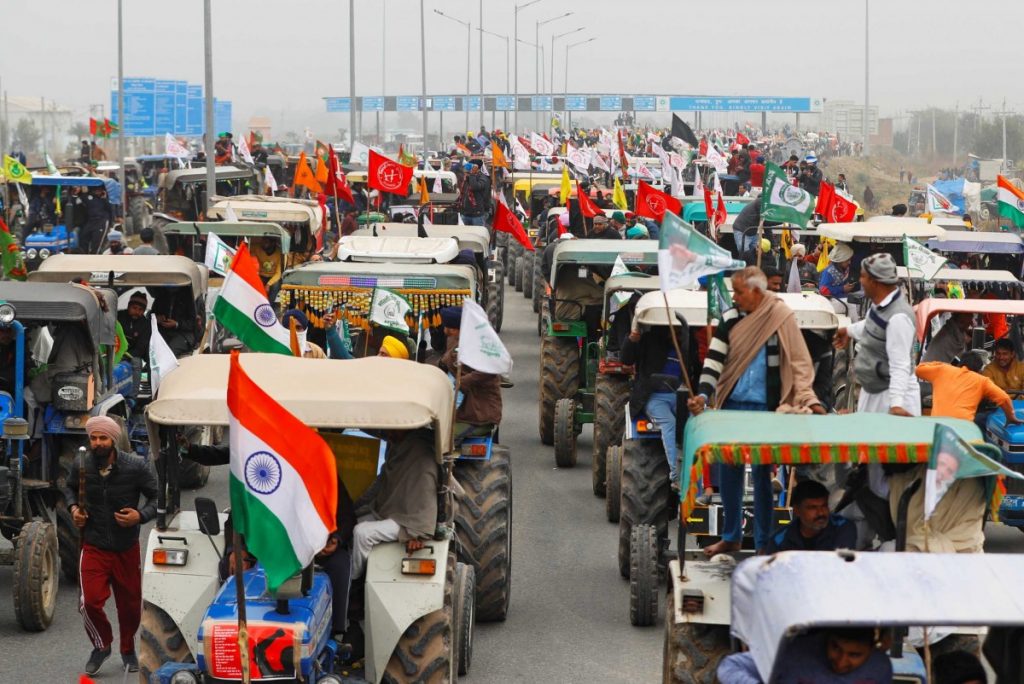 Unfamiliar with integrity and habituated to negotiation, we are annoyed by such tenacity. If the government is flexible, why do the farmers insist on taking this “hard line”?

Also read: Another Republic Day, Another Mass Protest and Another Year of Repression?

But let us look at this matter differently. Perhaps the “hard line” taken by farmers is a rare sign that a republic, in however faint a form, still survives in India.

We usually celebrate our status as a republic by showcasing our military might and the diversity of our various regional cultures. But would it not be more meaningful to recall on this day that the original preamble to the constitution, adopted in 1949, instituted India as a “Sovereign Democratic Republic.” (The words “Socialist” and “Secular” were added in 1976.) It envisioned, hence, a state free of foreign domination, governed by the elected representatives of the people, and one where the rule of law would be ensured by a division of power between different organs of the state.

In celebrations of the Republic Day, however, it often seems that all this is forgotten, and the sovereignty of the state becomes its only attribute worth applauding. What exactly sovereignty might mean in the age of global capitalism is uncertain, but what we celebrate is manifestly evident – it is the power of the state to defend its borders against external aggression. But what about democracy and republicanism? Why was it considered necessary to name India as both a democracy and a republic?  Are the two simply aligned with each other, or is there an internal division between them, between the rule of the people, and the rule of the law?

Though the tension between majoritarian democracy and the rule of law goes back several centuries, we could think of an example closer to us. In one section of his explosive speech Annihilation of Caste, Ambedkar presents a case for the communal award (separate electorates) by explaining its importance in historical terms. He argues here, as he does elsewhere, that political constitution must attune itself to social structure. Criticising those who condemn this award as the “result of an unholy alliance between the minorities and the bureaucracy” Ambedkar claims, first, that the enduring power of social differences cannot be ignored, and second, that there is a significant disjunction between the rule of law and the rule of the majority. 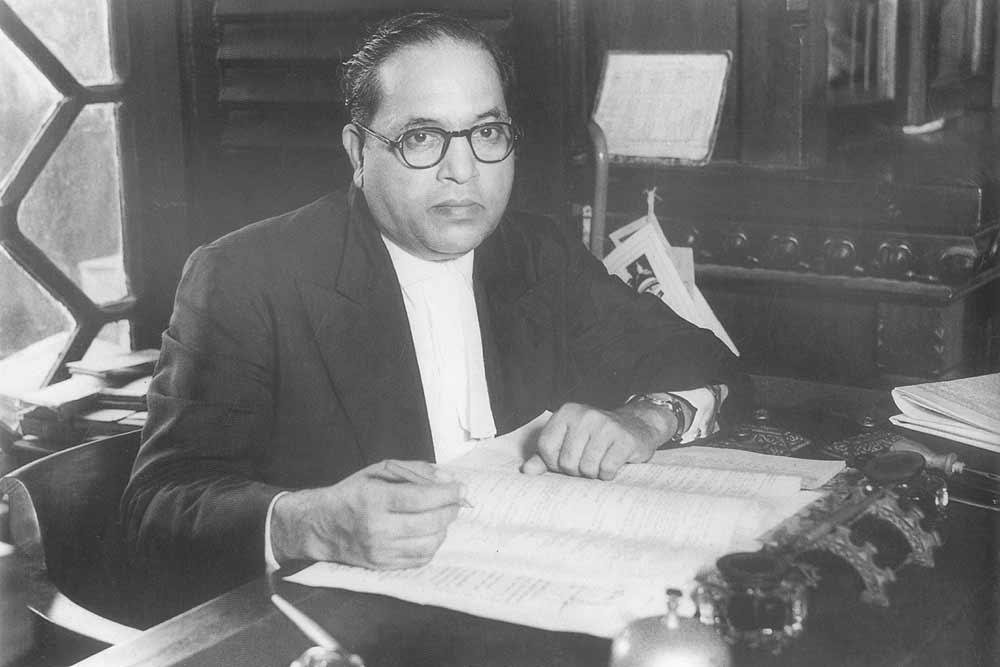 Ambedkar’s point is that law is legitimate only if it takes into account and attempts to redress historical social inequality, and not merely if it has the sanction of the majority. In the examples he gives of such social inequality, Ambedkar strikingly calls the division between Ulster and Southern Ireland a division of caste. Likewise, in the second example he gives here, he also names the division between plebeians and patricians in ancient Rome a division of caste. Caste hence functions for Ambedkar as the name of that stunningly unequal and hence warring division of the social into which we are hurled, all of us, by the sheer accident of birth.

Democracy, as we know, promises a certain equality – one person, one vote. But that equality means little when the prior and determining division of society is not taken into account. Ambedkar remained acutely aware of this conundrum. What happens to a res publica, a public thing – that is to say, a non-private and shared concern – in such a state of unequal division? Should not the law, and above all, the constitution, function as such a res publica – the foundation of the modern republic – so that it may prevent the sacrifice of the poor for the benefit of the rich?

One of the most important and interesting aspects of the farmers’ protest is its appeal to the constitution as the touchstone of the law. As Balbir Singh Rajewal, President of the Bharatiya Kisan Union (Rajewal) has said, the farmers see these laws as simply unconstitutional.

They are unconstitutional, first, because they disregard federal structure by treating agriculture as a subject under the jurisdiction of the centre, when it has been under the jurisdiction of states, and second, because of the haste with which the laws were passed, without consultation with the farmers whom they supposedly benefit. It is the farmers who are calling most vociferously today for the rule of constitutional law, reminding us of the immense urgency of not hijacking the very ground of the laws that are enacted. Like the protests against the Citizenship Amendment Act, the farmers’ protests have also taken upon themselves the task of upholding the vision and the spirit of the constitution.

It may be that the most dangerous threat for a republic is not always one that comes from external aggressors, but one that reinforces the tyranny of the powerful. If what primarily distinguishes a republic is division of powers and rule of law, this is because it aims, ideally, to protect citizens, and especially those who are called the “people”– those without economic and cultural capital – from the domination of the numerical or the powerful majority.

Is India such a republic, or has it taken any significant steps towards becoming such a republic? Sadly, too many signs point to the contrary. Though the danger of external aggression is constantly repeated and amplified, what farmers and labourers actually fear today is an unregulated market, one that brings death in the preposterous guise of freedom.

Let us be clear. It is most often the disenfranchised who insist on the rule of law. Social conflict rarely takes the form of a conflict between two equal factions, each of whom wishes to dominate the other. It is more often likely to appear between those who want freedom from the violent domination of the powerful, and those who benefit only from such domination. The farmers know that the new laws will subject them to even greater violence by market forces than they already face. They know that despite their benevolent names, these laws are not made for them. When they repeatedly remind us of the illegitimacy of these laws, they do so by invoking the ground of the law. They insist that the spirit of the constitution has been manifestly betrayed by the intent of the new farm laws.

Also read: As Adharma Overwhelms Dharma, Whose Republic Is it, Anyway?

On November 25, 1949, in his final speech after the third draft of the constitution had been ratified, Ambedkar spoke openly of his fear that the new nation may slide too quickly from a democracy to a dictatorship: “It is quite possible for this new born democracy to retain its form but give place to dictatorship in fact.” To hold this terrible danger at bay, he laid out three guidelines. The first, not surprisingly, was to “hold fast to Constitutional methods” in the quest for social and economic aims. The second presciently advised his compatriots not to succumb to the lure of Bhakti or hero worship in politics.

Unquestioning devotion to a great man paved, in his view, a sure road to degradation and dictatorship. And the third point reiterated a theme that runs through Ambedkar’s entire work – namely, the urgency of first acknowledging, and then addressing, the abysmal absence of equality and fraternity in India. “On the 26th of January 1950,” he famously said, “we are going to enter into a life of contradictions. In politics we will have equality, and in social and political life we will have inequality [. . .] How long will we continue to live this life of contradictions? How long shall we continue to deny equality in our social and economic life? If we continue to deny it for long, we will do so only by putting our political democracy in peril.”

As we commemorate the 72nd anniversary of the Indian republic, let us heed the echo of Ambedkar’s words in the words of the farmers who are putting their lives on the line, not only for the sake of their own livelihood, but also for the future of our republic.

Simona Sawhney teaches in the Department of Humanities and Social Sciences at IIT Delhi.