The parents of the Ayotzinapa students have kept up a dogged campaign for a year with a battle cry: “They took them alive, we want them back alive”. 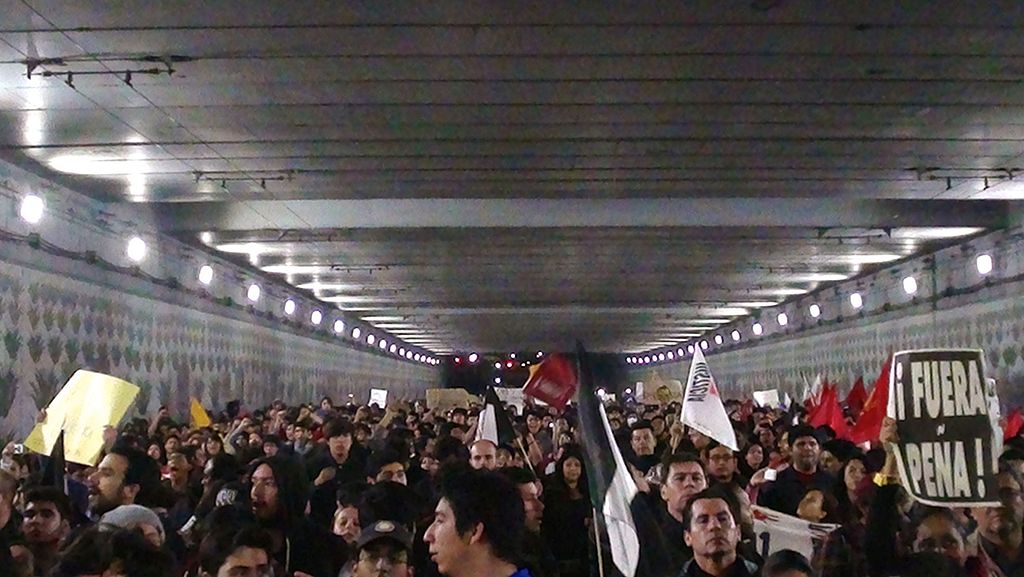 A protest march in November 2014 calling for justice for the victims of the Ayotzinapa massacre. Credit: Wikimedia Commons

Just shy of 6 pm on September 26 a year ago, about a hundred first-year students of a rural college in Ayotzinapa in the state of Guerrero, Mexico, set off on two coaches for nearby towns. Their mission was to commandeer buses to take them to Mexico City for the commemoration of the October 2, 1968, student massacre days before the Olympic games.

They did not know they were being tracked from the moment they left their campus or that their group had been infiltrated by a soldier on active duty. Neither were they aware that for many of them it would be the last day of their lives. Three of them would be killed that night and 43 others would disappear into the darkness.

The Ayotzinapa normal rural (rural teacher training college), part of a dwindling chain set up almost a century ago in the heat of the Mexican revolution, caters to young men from impoverished families in a territory crisscrossed by rivalling drug gangs. Nearby is the glittering tourist resort of Acapulco, famed for its cliff divers and hedonistic nightlife.

The rurales have never gone down well with the clergy and the government for their insistence on social justice and political activism. The one in Ayotzinapa is more troublesome than most and counts among its former students Lucio Cabañas, who led armed guerrillas in the mountains of Guerrero state and was killed by the army in 1974.

The students reached the centre of Iguala town a little after 9 pm on the hijacked buses when hooded armed men trapped their convoy in expert crossfire. Some scattered into the neighbouring streets and hid themselves on rooftops or behind bushes but 43 of them were picked up and loaded on to pickup vans, never to be seen again.

Another group of Ayotzinapa students reached Iguala around 11 pm to rescue their comrades. They called the local press to the site of the attack, where they were fired upon while speaking to the journalists. Two of them were left to bleed to death. The body of a third student was found in the morning with his eyes gouged out and without his facial skin. Another bus carrying the local football team was also mistakenly attacked that night, resulting in three more deaths.

The next morning, the ambitious local mayor who had amassed an inexplicably large fortune denied any knowledge of the night’s events, saying he was dancing at that time. His wife is from a notorious drug-running family and she wanted to replace him as the town’s mayor while he aimed for the state governor’s post.

The federal authorities at first blamed the students and tried to pass it off as one more crime in one of the country’s most violent states. But with growing popular indignation and an international media scrum after locals began finding mass graves around Iguala in a search for the disappeared, the Mexican government scrambled for a more credible explanation.

The new official version was that the students had come to town to disrupt a function organised by the mayor’s wife. The mayor asked the local municipal police to do something. They then arrested the trainee teachers, took them to the police station and handed them over to the dreaded Guerreros Unidos (Guerreros United) drug gang, which executed them and burned their bodies to dispose off the evidence. At one time, it was suggested that wild animals might have eaten up the remains.

Signs of a cover-up

Twenty-two local policemen were arrested and the mayor and his wife, who had gone into hiding, were picked up in Mexico City as intellectual authors of the crime. Soon afterward, four men admitted to the killings. The federal police and the army had played no part in the events, the government claimed.

Every single one of these assertions has been proven to be demonstrably false. An investigation by the Mexican magazine Proceso, together with the University of California, Berkeley’s Investigative Reporting Program, revealed that the students had reached Iguala at least two hours after the mayor’s wife ended her programme. They were unarmed and in grainy videos on their mobile phones they kept asking the policemen why they were being shot at. They identified federal policemen among their attackers. The local police did not possess the weapons with which the students were fired upon.

A magistrate present at the police station that night, who has since fled to the United States fearing for his life, said the students were not brought there. The only ones in the cells were some drunks who were let off after paying a fine. Some of the policemen who admitted to having turned over the students had torture marks on them. The four killers turned out to be poor builders, again tortured to confess to the crime.

One of the disappeared students somehow sent a text message to his mother some time after midnight asking her to put some money into his account. The students were either held or driven somewhere for at least four hours before the decision was taken to eliminate them.

The army was aware from the start of the goings-on. There is a military base not far from where the students were killed. A local army officer came to the police station that night on the pretext of locating a stolen motorcycle and had a good look around. Soldiers questioned and photographed some of the injured students who had made their way to the local hospital and threatened to make them ‘disappear’. The army formed part of the local C4 (control, command, communication and computation) centre where the municipal, state, federal police and the military share intelligence and CCTV footage. The government and the army are not allowing the soldiers to speak to independent inquiry teams.

Argentinean forensic anthropologists brought in by the parents of the students and specialist investigators of the Inter-American Commission on Human Rights (IACHR) say there was no mass incineration at a garbage dump in a wooded area as the government had claimed. More than 30,000 kg of wood, or 13,300 tyres, would have to be lit for 60 hours to dispose of the bodies. The plume of smoke would have risen to at least 300 metres, making it clearly visible from the nearby towns, and the flames would have been enough to set off a forest fire.

What does the government know?

Almost no one other than the parents believes the students are alive. Five buses were involved in that night’s events but the official inquiry speaks of four. The emerging unofficial consensus is that the fifth bus either had a large stash of money or drugs on board for which the students were killed. Locals fear that the bodies were incinerated at a crematorium that the local army base is rumoured to have.

No one knows for sure how high up the order came from, but the negligence of the official inquiry lends credence to the belief that the state either participated directly in the killings or is protecting those who carried it out. It took President Peña Nieto ten days to order an inquiry. At his first meeting with the Ayotzinapa parents, he made sure he looked suitably contrite but has done little more since then. Ahead of the second meeting on September 24, a second “killer” has surfaced and the remains of a second student identified. The only certainty this adds is that the government knows far more than what it is letting out.

The parents of the Ayotzinapa students have kept up a dogged campaign for a year with a battle cry: “They took them alive, we want them back alive”. Their movement has radicalised Mexico but that does not mean the state will give in easily. At the meeting with the parents on September 24, Peña Nieto promised a second inquiry. Mexicans will be sceptical of his intentions, believing so far that his administration has been prevaricating and stalling on the issue.

The students were on their way to the capital to remember the hundreds of victims of the 1968 massacre ordered by the then President and carried out by the police and the army. The Mexican state covered up that slaughter and might hope to do the same with this one. After all, thousands of civilians have disappeared on Peña Nieto’s watch without any significant threat to his rule.