Remembering Gauri Lankesh: A Hope, a Possibility, a Lesson

Though her assassins and their backers succeeded in killing her, they have failed to silence her. 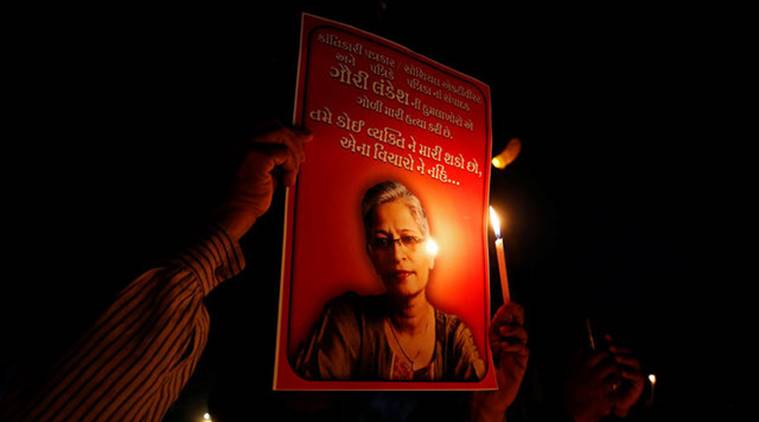 People hold placards and candles during a vigil for Gauri Lankesh, a senior Indian journalist who according to police was shot dead outside her home on Tuesday by unidentified assailants in southern city of Bengaluru, in Ahmedabad, India, September 6, 2017. REUTERS/Amit Dave

She was not just a journalist but an empathetic human being and committed human right activist, and her gruesome murder stirred the conscience of civil society. Spontaneous demonstrations erupted not only in Bangalore, where she was killed, but all over the state, country, and different parts of the world like the US, Australia, Russia, Canada, France, England and so on.

On the day of her funeral, September 6, 2017, several thousands rushed to the city from every nook and corner of Karnataka as well as neighbouring states. A week later, on September 12, in an unprecedented and huge gathering, tens of thousands of people from every walk of life participated in a memorial, along with luminaries from every field.

In 2018, the reputed international body for press freedom, Reporters Without Borders (RSF), honoured Lankesh with a stele in the French city of Bayeux in recognition for her service to journalism. Last year, the city of Burnaby in Canada decided to officially observe ‘Gauri Lankesh day’ on September 5 every year.

In different parts of the world, many such heartwarming tributes to Lankesh have been pouring in.

Also read: A Year After Gauri Lankesh’s Killing, It’s Important To Remember Who Targeted Her

The spontaneous outrage against Lankesh’s murder compelled the state of Karnataka – then run by the Congress under Siddaramaiah, who held Lankesh in high esteem – to constitute a special investigation team (SIT) to catch the culprits.

The SIT did a meticulous job. Seventeen of the 18 suspects were arrested and have been in judicial custody since. They include mastermind Amola Kale, the shooter Parushuram Wagmore and others.

The investigation also revealed that the same Hindutva gang was responsible for the assassinations of rationalist Narendra Dabholkar and Communist Party of India (CPI) leader Govind Pansare in Maharashtra and academic M.M. Kalburgi in Karnataka.

The arrests in the Lankesh case dismantled the gang’s plans of assassinating a number of other famous rationalists and progressive individuals. The investigation also unravelled the culprits’ indirect connections to the right-wing extremist organisation, Sanatan Sanstha.

Even though the chargesheet in the case was filed by the SIT back in November, 2018, the trial only began in June this year and few witness have so far been produced and examined. The prosecution has more than 300 witness and around a thousand pieces of evidence to be produced for the trial. The demand to constitute an exclusive fast-track court has not been heeded by the Bharatiya Janata Party (BJP) government now in power.

Nevertheless, the Karnataka Control of Organised Crime Act (KCOCA) Court in Bengaluru has allotted the second week of each month from August 2022 onwards for the trial.

Meanwhile, the sessions judge who took the initiative has been elevated to the high court and the trial for the month of September will resume on the very day of Lankesh’s assassination, before a new judge. Since the accused have been booked under the stringent KCOCA, along with relevant sections of the Indian Penal Code (IPC), bail has been regularly rejected by the courts.

Lankesh’s message is her moral courage

Lankesh, a committed democrat and human rights activist, would have opposed the denial of bail to her assassins – despite the chargesheet having been filed – on the principle of justice. She used to engage even her ideological adversaries warmly and compassionately on social media.

In fact, her last tweets and Facebook posts were an appeal to the youth of the oppressed sections to understand the Brahminical and corporate systems as their enemies and a humble appeal to progressive organisations to come together to fight the common enemy, leaving their differences to be sorted out later.

Even in her lifetime, her weekly newspaper served as a platform for the views of the marginalised, while her regular columns and editorials exposed the policies and designs of Brahminical Hindutva and the corporate forces backing them. The complexity of an unfolding situation could perplex her and she often took stands which she later realised were improper. She would apologise and correct herself with great ease and simplicity.

She hardly had much of a personal life. Except  for a weekly visit to meet her sister, mother and niece, the rest of her time was spent with movements, agitations or seminars organised by different organisations in different parts of the state. Another part of her ‘leisure’ time was spent taking on officialdom for one people’s cause or another.

While other journals and magazines made money by being in the good books of the government and corporate sector, her magazine was perpetually making losses since she ran it without advertisements and without favouring  anyone in power – a tradition she inherited from her father.

Though the larger world came to know about Gauri only after (and because of) her gruesome assassination, her  transformation – from an urban, middle-class, cosmopolitan feminist sympathising with the other half, in an abstract sense, to a deeply empathetic, involved activist-journalist with death defying courage – is what made her life and work especially interesting and inspiring.

It is said that the real mettle of an individual, or an organisation, or a nation comes out in times of crisis. The choices made in these times define the persona of an individual or nation. History – and the present – is replete with examples of individuals and movements resorting to compromises, opportunism, betrayals and U-turns by bowing in the face of crisis. But Lankesh  always faced her crises head-on, without bending an inch on her principles and beliefs.

She had to sacrifice her comforts and personal passions to sustain herself on the path she chose. Even when the police  conspired to throw her out of her own institution because of her uncompromising fight against the government – against its policies of evicting and killing Adivasis in the name of ‘encounters’ with Maoists – and even when she had the option of a lucrative career in English journalism, she made the bold and principled choice to start a new Kannada publication with the values she cherished; with more fervour and rage.

The crisis of opposition

These attacks are mostly happening in states where the Bharatiya Janata Party (BJP) is directly or indirectly in power, like Uttar Pradesh, Madhya Pradesh and Kashmir. The lynchings, the unconstitutional incarceration of dissenters, and the like, are hardly ever discussed in the big media.

Today, the media has been tamed and people’s movements – despite occasional and temporary victories, like the recall of the farm bills or the agitation against the Citizenship (Amendment) Act (CAA) – are unable to stop the Hindutva juggernaut. Opposition parties have failed to check the onward march of fascism. The search for real alternatives requires the courage to swim in uncharted waters, risking everything. That is where Gauri Lankesh becomes not just a memory, but a lesson.