Public hearing highlights how half the eligible population in the state is being denied food and pension rights due to issues with Aadhaar linkage.

Two days after the Supreme Court in a majority judgement upheld Section 7 of the Aadhaar Act 2016, allowing use of Aadhaar for government benefits and subsidy schemes, food rights and pension campaigners in Jharkhand on Friday organised a public hearing to show how many people were being denied food and pension rights due to Aadhaar linkage.

The public hearing, which coincided with the first death anniversary of 11-year-old school girl Santoshi Kumari, who had died of hunger last year while crying for rice, gave a call for providing pension and rations to all.

It also demanded implementation of universal pensions, removal of mandatory imposition of Aadhaar, timely payment, an inflation-indexed increase in the pension amount to at least Rs 2,000 per month and reducing the eligibility age. The organisers and participants also urged all political parties to include these demands in their election manifestos.

‘No pension for half the eligible population in Jharkhand’

Organised by the Jharkhand Right to Food Campaign and Pension Parishad outside the Raj Bhavan in Ranchi, the hearing noted that “half the eligible population in Jharkhand does not receive social security pensions.”

It said there were 17 lakh elderly, widows and differently abled persons in Jharkhand who qualify for social security pensions but did not receive their entitlement. 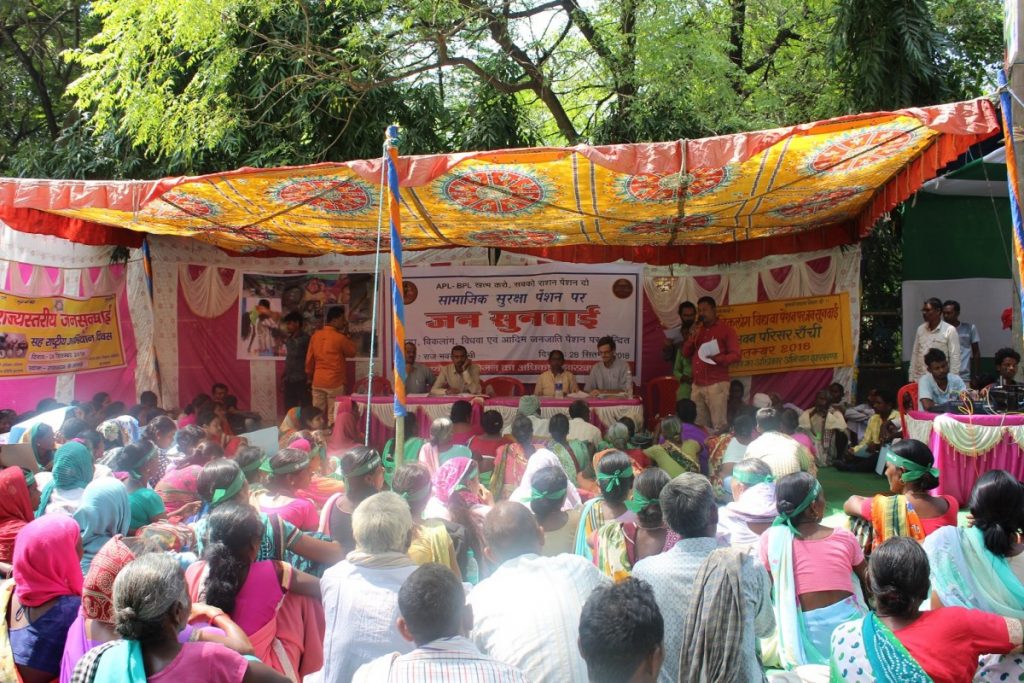 Public hearing on pension and rations outside Raj Bhavan in Ranchi. Credit: Right to Food Campaign

“One important reason is that pension coverage in Jharkhand is not universal. Even those who do receive pensions face chronic selection errors and administrative glitches. In 2016-17, three lakh pensioners were deleted as “fake”, whereas many genuine persons whose pension accounts were not linked with Aadhaar were also excluded,” the public hearing noted.

The hearing also saw a large number of these elderly, widows, single women and differently abled persons from different districts of the state testifying denial of pensions or rations. The gathering also demanded right to universal social security pensions ahead of World Elderly Day on October 1.

The testimonies gave insight into the problems faced in registration and receipt of pension as also how unscrupulous elements siphon them off. Duryodan Oran of Chatarpur complained that he had “filled the form 10 times but didn’t get any pension.” When he was finally enlisted, he found that “someone else had taken the pension.”

Manmase Tikri, a resident of Nagri block, complained how his wife had been disabled for four years but had not been receiving her pension. He said that whenever they went to the bank, “they always tell us that the money has not arrived.”

The hearing also had several noted rights activists speak about the problems faced by the people.

Ranchi University visiting professor Jean Dreze said, “Pensioners have been badly let down by the Central government. The central contribution to old-age pensions has stagnated at Rs 200 per month for many years. Even that measly amount is not paid regularly despite the Supreme Court orders calling for payment by the 7th of each month. A series of Aadhaar-related problems have made pension payments even more erratic.”

A Sahayata Kendra staff member claimed that many Aadhaar cards have been cancelled, and when beneficiaries lodged complaints, they were told that the officials there did not do pension-related work and that they would have to go to far off Latehar to file their complaints. Right to Food campaigners in Jharkhand claim that 15 people have died due to hunger in the state in the past year. Credit: Right to Food Campaign

The staffer added that banks also complain about the know your customer (KYC) norms, adding that they do not have proper Aadhaar linkage. For lack of Aadhaar, the staffer said, many people were being made to travel to get a a paltry sum of Rs 200 in pension.

Binny Azad of Ekal Nari Shakti Sangathan also spoke about how, “even at the official camps organised by the government, people are not given social pensions. And even those who get pension rarely get it on time.”

‘Pension given to the dead while those alive are denied’

“The dead are declared as alive and pensions are usurped in their name while those alive are declared dead and their pensions cut,” Azad said, while alluding to the extent of misuse.

Meanwhile, right to food campaigners in Jharkhand noted how, in the past year since Santoshi’s death, 15 people have died due to hunger in the state. “Of these, six were Adivasis, four Dalits and five from backward castes,” they said, adding that “all these deaths happened due to the denial of security pensions or rations from the PDS.”

Providing a break up of how the exclusions took place, the activists said “Five families did not even have a ration card and five families faced sustained issues with Aadhaar-based biometric authentication (ABBA), leading to denial of rations. In addition, six people were denied their social security pensions. In 10 cases, Aadhaar-related issues played a role in the hunger deaths.”

The activists also charged that the Jharkhand government has not initiated any action to stop the persistent starvation deaths in the state. They said that deleted ration cards have not been reinstated, Aadhaar-based biometric authentication system has not been discontinued, left out families have not been provided ration cards and Aadhaar continues to remain mandatory for welfare schemes.

The Right to Food Campaign said that, among other things, Aadhaar-based biometric authentication should be discontinued and the list of families whose ration cards were cancelled and whose names were struck of pension lists for not linking their Aadhaar should be made public and their rations and pensions re-started immediately.