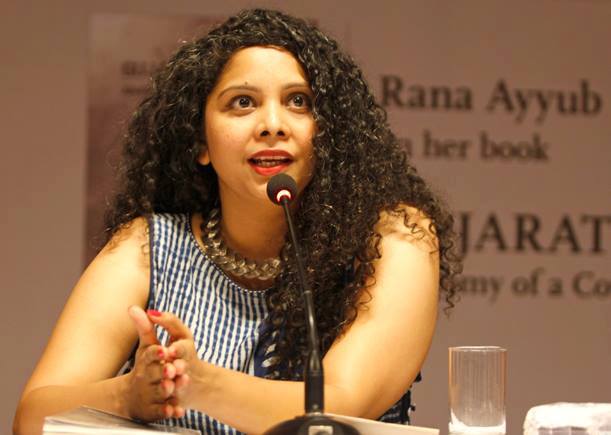 New Delhi: On April 6, journalist and author of Gujarat Files:Anatomy of a Cover Up,  Rana Ayyub, took to Twitter to “name and shame” a man who had sent her abusive messages with sexual overtones on Facebook.

Bincylal Balachandran, 31, who worked with Alpha Paints in Dubai as a customer service employee was reportedly sacked when complaints of his behaviour reached his employers. According to Gulf News, social media users who were enraged by his messages brought it to the company’s attention on April 7, following which, Balachandran received a termination order on April 8.

A tweet by Ayyub on April 10 also suggests that the UAE government revoked Balachandran’s visa, because of which he is being deported back to India.

UAE govt has revoked Bincy Lal's visa and r deporting him back to India. A lesson for those who harass us, will drag you out of ur ratholes

That online abuse did not go unpunished in Balachandran’s case was certainly a cause to celebrate for many who have been at the receiving end of vicious trolling on social media. The Abu Dhabi company and UAE government’s actions come at a time when online abuse has proliferated throughout social media – especially against women who are perceived to be vocal and opinionated.

Happy to be trending on twitter for a promising beginning. Hope we in India set a similar precedence of zero tolerance towards harassment.

Drawing from Ayyub’s tweet, the Indian government has done little and has failed to take online harassment seriously. In July 2016, women and child development minister Maneka Gandhi had launched a special cyber cell to deal with trolls and online abuse. Complaints could be sent to an email address (mwcd@gov.in) or be tweeted with #IAmTrolledHelp. The efficacy of this system, however, remains in question with no follow up reports as yet.

On the other hand, a report on Altnews points out that many men who are abusive and sexually explicit on social media are in fact followed by Prime Minister Narendra Modi. Some other Twitter users who have taken to excessively derogatory remarks in the past have also posted pictures of themselves meeting the prime minister in his office. Evidently, the report suggests that in silently condoning online abuse, the Modi government and the right-wing are encouraging trolls on social media.

Recent victims of online abuse have been aplenty. Earlier this week, activist Bondita Acharya was threatened with death, rape and acid attacks in Assam because she condemned the arrest of three people on charges of carrying beef. In February this year, 20-year-old Gurmehar Kaur, faced with constant abuse and trolling on social media over her political views, was pushed into silence. As for women journalists like Ayyub, Barkha Dutt, Neha Dixit, or activists like Kavita Krishnan, online abuse is a regular feature on their social media feed, with men feeling entitled to mouth off at will.

As a consequence, women like Ayyub have had to rely on social media when looking for redressal. As per a Newslaundry report from 2015, social media has enabled women to fight rape culture by giving them a space to speak up and find support in. The most recent example, other than Ayyub’s, is the case of TVF CEO Arunabh Kumar, against whom several women levelled allegations of harassment. Last year, a similar case of women finding solidarity against sexual harassment on social media was seen in the case of an English literature undergraduate student from Jadavpur University.