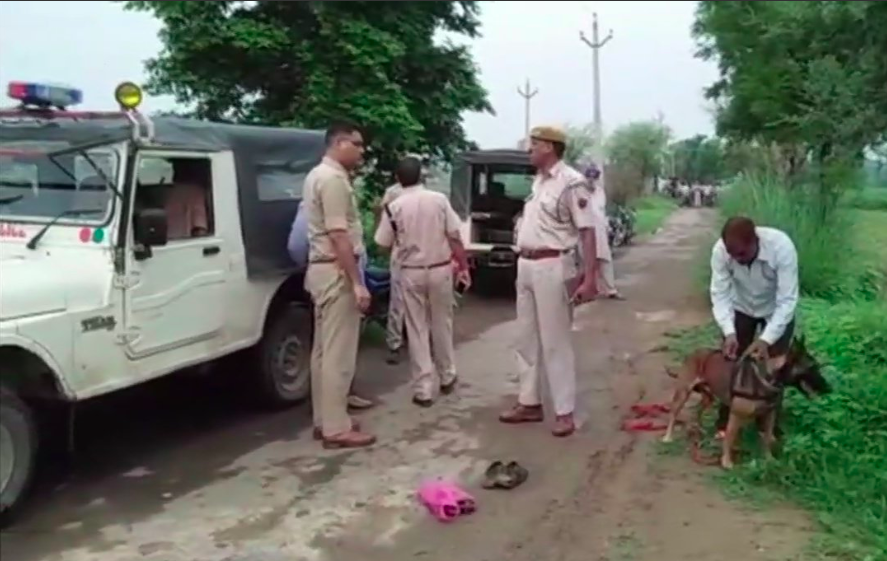 Police at the site of the violence. Representational Image. Credit: Twitter/ANI

New Delhi: Police in Alwar reportedly took three hours to get a lynching victim to a hospital only six km away, stopping on the way to first drop the cows he was transporting to a shelter. Two eyewitnesses also said that the police beat 28-year-old Rakbar Khan, though the police has denied this allegation.

According to a report in the Times of India, the two cows were taken to a shelter at a distance of ten km a full hour before Khan arrived at the nearest hospital – the Community Health Centre in Ramgarh – on Saturday. Khan and a friend of his were transporting two cows on the night of July 20 when a group of villagers stopped them and started beating them, apparently suspecting that the cows were being smuggled.

While the FIR says the police rushed to the spot and Khan was taken to a hospital immediately, the medical records show otherwise. According to the health centre’s OPD records, the police brought Khan in at 4 am. The doctors declared the victim to have been brought dead. The police were alerted about the attack at 12:41 am, and reportedly reached the spot within 15-20 minutes. Meanwhile, Khan’s cows were dropped at a gaushala by the police at 3 am, a caretaker at shelter told the Times of India.

“They (police) brought him at 4 am and as he was brought dead, I directed that the body be shifted to the mortuary,” Dr Hasan Ali, who was on duty at the time at the CHC, told the newspaper.

Policemen in #Alwar took 3 hrs to get a dying Rakbar Khan, the victim of a lynch mob, to a hospital just 6 KM away.

They took a tea-break enroute.

This is Modi’s brutal “New India” where humanity is replaced with hatred and people are crushed and left to die. https://t.co/sNdzX6eVSU

The Indian Express reported that the police van also stopped for tea on their way to the hospital. “The police jeep stopped, the driver came out and took four tea cups. The others in the car didn’t get out. I didn’t see who was in the jeep. They went off after drinking tea,” Lal Chand, who owns a tea stall in Govindgarh, told the newspaper.

There are other points in the police’s narrative that are not corroborated by eyewitnesses as well. The police heard of the incident because of a complaint filed by one Naval Kishore Sharma, who identifies as a gau rakhsak. Sharma has claimed that he guided the police to the spot, so the police’s claim that the delay could have been because of difficulty in finding Khan is questionable.

Sharma has also said that Khan was very much alive when the police left the site with him, and was also alive when Khan, the police and Sharma reached the police station. “Police helped Rakbar change his clothes. They assaulted him as they questioned him and I discussed with the police the role of some people I suspected in this smuggling. Since I am a gau rakshak, I know Ramgarh well,” Sharma told Indian Express.

Eyewitnesses – and a local BJP lawmaker – have claimed that the Rajasthan police were involved in beating Khan, and did more damage than the villagers who attacked him. “I saw the police kicking a man (Khan) lying in mud and abusing him. When I went there to see what was happening, they told me to go away,” Maya Sharma, a resident of Lalavandi village who said she was awoken by the commotion, told the Hindustan Times.

BJP’s Ramgarh lawmaker Gyan Dev Ahuja has demanded a judicial probe into the incident, saying that the police beat Khan to try and send a message. “They (the accused) slapped the cow smuggler a bit and informed the police. My sources told me that police took the smuggler to custody and thrashed him with lathis to show people that they are taking strict action,” Hindustan Times quoted him as saying.

The police denied these allegations, saying that the violence took place before they reached the spot.

The investigation has now been handed over to an additional SP-rank officer by the IG of the Jaipur range. Three people have been arrested so far. Alwar superintendent of police Rajendra Singh told Hindustan Times, “If any official is found misleading the investigation, then we will take necessary action against them.”

A contempt plea has also been filed against the Rajasthan government in the Supreme Court, with petitioners Tehseen Poonawala and Tushar Gandhi saying that lynchings are taking place despite the apex court’s rulings on cow vigilantism, Indian Express reported. The plea will be heard on August 28.