In Rajasthan, No Respite for Nindar Farmers Resisting Land Acquisition for Over a Decade

A 21-year-old couldn't sit for exams because she was afraid her home would be destroyed if she left. There are 500 others like her who cannot afford to leave the site for fear.

Nindar, Rajasthan: It’s been a decade since 500 farmers were notified that their 286.87 hectares of land in Nindar village of Rajasthan was going to be acquired by the state government for a housing project.

The farmers have continued to protest against the acquisition for primarily two reasons: one, the government did not properly take into account their land records before handing out awards leading to unfair compensation. Secondly, without paying even that meagre compensation, the authorities want possession over their land.

The Jaipur Development Authority (JDA) had, in fact, offered land in lieu of the land being acquired as compensation, that is, the farmers would be given 25% of the developed land from the project in proportion to the area of their land acquired. This also means that farmers would be required to pay a hefty lease amount to the JDA in order to receive the promised portion. In short, the landowners will have to pay money to buy their own land from the government.

Farmers claim that the JDA had chalked out this deal because it didn’t have sufficient funds.

“We only want that the ruling Congress government in the state put its 2013 land acquisition law above this colonial law if it is really concerned about the farmers,” Nagendra Singh who is leading the protest against the land acquisition in Nindar told The Wire.

This standstill has taken a toll on the lives of the farmers who are living in constant fear of losing their land.

Chandu, a 60-year-old woman, has been an occupant and owner of land in Nindar since she was married here at the age of 15. 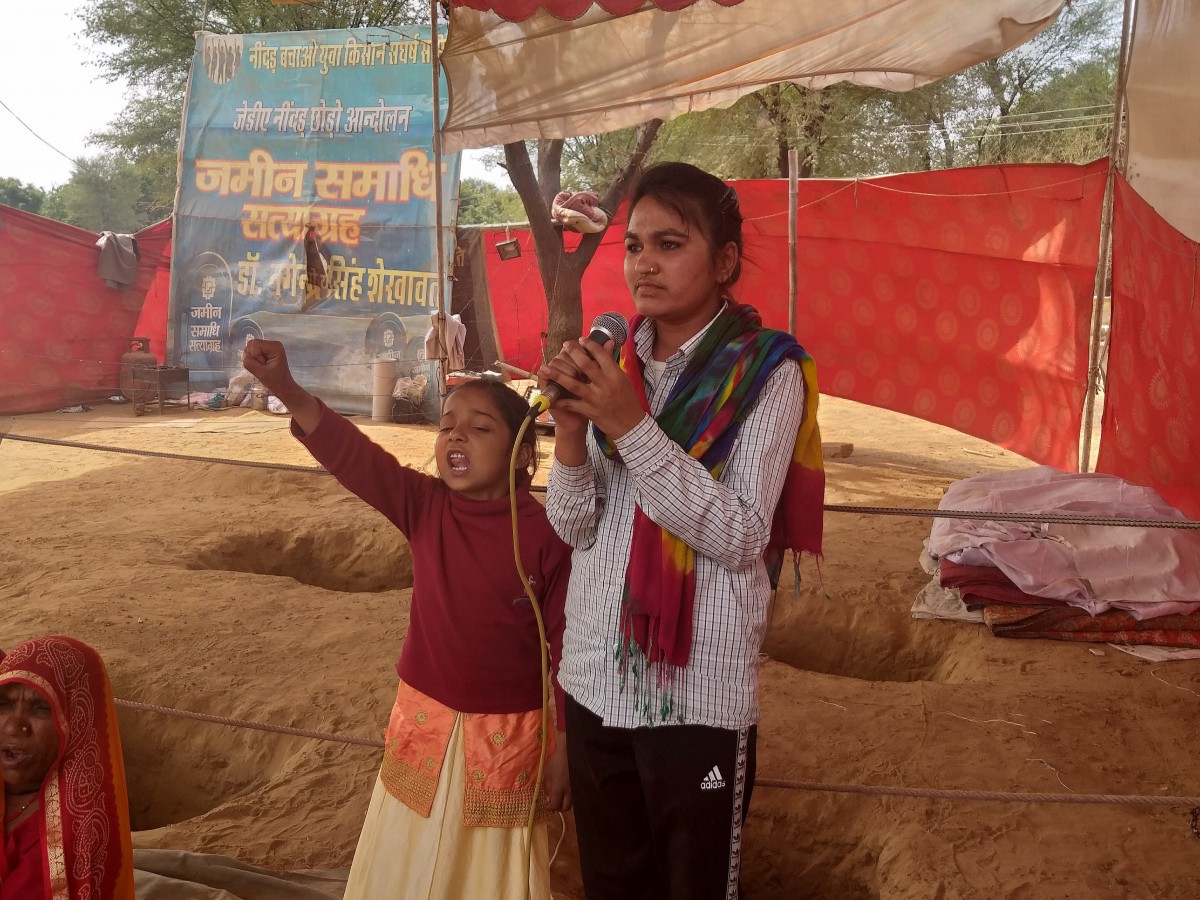 She has been cultivating a part of her land for years to make some money. “My son, grandson, everyone farms on this land. This land is not just our residence but also the only source of our livelihood,” she said.

Afraid that the JDA authorities would demolish their homes in their absence to take possession of the land, the students skipped their examinations as they could not afford to leave the protest site for even a minute.

Mamta Sharma, a 21-year-old who is pursuing a Masters degree in political science at the Bhawani Niketan college in Jaipur, has been witness to the protest against the land acquisition since the age of 10. Last year, she didn’t write her final exams and subsequently failed because she was forced to prioritise saving her home over her education. “Our parents sit on protest all night but in the morning, they go for work and at that time we need to be present so that in case the JDA authorities come with JCB, we can call for help,” Sharma told The Wire.

This year, the protesters witnessed a crackdown on the first day of January.

“For new year, people plan a lot of things. But for us, the first day of 2020 was miserable. The JDA officials came early in the morning to demolish our homes. They even succeeded in destroying half of my home, till the time I could call for help. We can’t leave this protest even for a second,” said Usha, 35, a landowner in the area.

For many others, undertaking the much-needed construction in their homes is a big dilemma.

“The family is growing, we need more rooms, bathrooms and fixing the leaking roof. But all this takes a huge amount of money and we don’t even know what the fate of our house will be. Suspense over whether the land will be taken away or remain with us, is killing us every moment,” said Mohini Devi, a 60-year-old resident of Nindar. 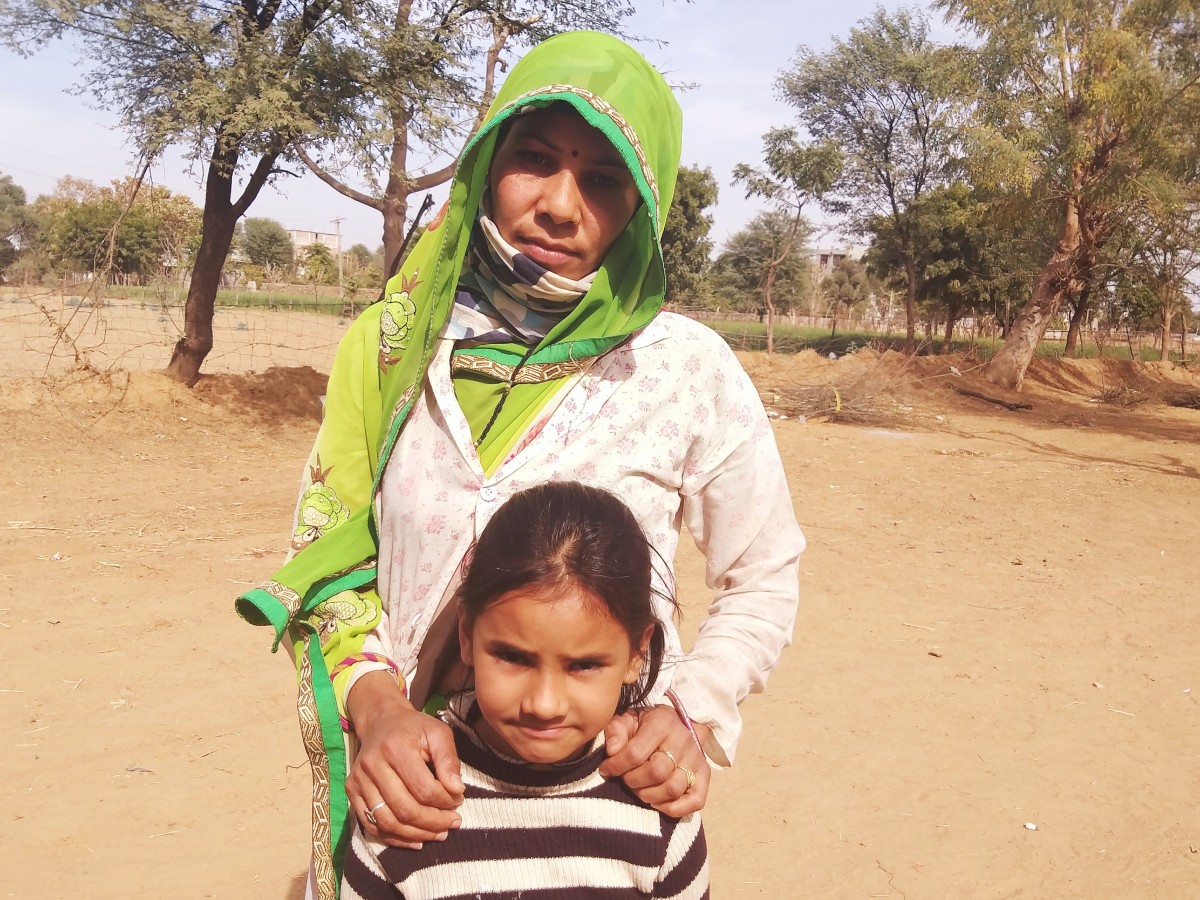 Aachi Devi (22) and Mamta Devi (28) were married in the same house to twin brothers in Nindar. Last year, their husbands died in a road accident leaving behind only a plot in Nindar which is also now being acquired by the state government. “It’s getting difficult for us to pay the school fees for our children. We don’t have any income to continue with their studies and if this land would be taken, we will come on roads,” Aachi Devi told The Wire.

The farmers have demanded that the government declare that the land acquisition process has lapsed. They have also raised the matter in the Rajasthan high court for the same on the ground of section 24(2) of the Right to Fair Compensation and Transparency in Land Acquisition, Rehabilitation and Resettlement, 2013.

According to this provision, if the possession of land acquired under the old law – the Land Acquisition Act, 1894, under which the land in Nindar was proposed to be acquired in 2010 – is not taken for five years or more before the commencement of the new law, or if compensation is not paid within this time period, the land acquisition process would lapse. Additionally, if the government wishes, it could initiate land acquisition under the new law.

As we go further, here’s a brief on how land acquisition works: The owner of the land, as per the law, is the government. It only leases out the land and has the authority to acquire it when it feels it is needed for any “public purpose.” In return, it compensates those whose land it has acquired.

The catch here is that right over a property can be attained in various ways – through title, tenancy, easement or any other livelihood interest. The previous legislation called the Land Acquisition Act, 1894 recognised only the title holders as claimants of the compensation which led to unrest among those who enjoyed right over the land through other means. Plus there was no provision to seek the consent of the persons before acquiring their land. Even, the “public purpose” for which the land was acquired was (is) used as an umbrella term for all kinds of projects that the government wished to execute. More importantly, fair compensation has always been a contentious issue between the government and the land owners. As per the provisions of the Land Acquisition Act, 1894, the government is required to publish a preliminary notification in the official gazette when it wants to acquire any land for any “public purpose” (Section 4). Any person interested in that land can object to the acquisition, in writing to the collector, within 30 days from the date of publication of notification. The collector is required to give an opportunity to the objectors to be heard and then make an inquiry and prepare a report to finally decide the objections. Upon considering the report, when the government is satisfied that the land is needed for a “public purpose”, it must declare so within one year from the date of publication of the preliminary notification (Section 6).

The farmers in Nindar claim that after the notification of acquisition was published in the official gazette on October 7, 2010, the government didn’t issue a declaration that the land was being acquired for “public purpose” until December 16, 2011, by which time, the deadline had already passed.

They also allege that the government received the file with an acceptance report under section 6. The Land Acquisition Officer asked the concerned zone to get the declaration published in the gazette and on April 12, 2012, it was noted that the gazette was published on a backdate – December 16, 2011.

The farmers claim that no opportunity of hearing was given to settle the objections and that the report under section 5A was not sent to the state government but the Land Acquisition Officer (LAO) still proceeded with the award.

Also read: Yes, a Land Acquisition Act Can Address Both Justice and Prosperity

In 2013, the authorities passed the award to compensation but despite this, couldn’t take possession over the land.

However, the high court dismissed their petition while recording that no merit was found in the farmers’ claims.

At present, more than half of the farmers have refused to surrender their land until their demands are met. “We want the authorities to conduct a proper assessment for valuation of our land and then accordingly decide the compensation,” said Narayan Sharma, a farmer in Nindar.

When this matter was highlighted in 2017, the JDA had agreed to form a committee with the farmers’ representatives as participants to carry out a re-survey. However, three years later, the authorities say that the survey has been revised without making them a party.

Another difficulty faced by the farmers is that the JDA has taken possession over a small portion of this 286.87 hectares of land from some farmers. However, it has not paid them compensation. This could seriously affect the chances of attracting relief under section 24(2) of the new land acquisition law since a part of the proposed land is taken into possession.

“Quite tactfully, the JDA took over possession on its own land in this area – the sawai chak and the mandir mafi land – where some farmers were living and convinced them to take 25% of the developed land. However, it’s still not clear if those farmers have paid the lease money,” said a landowner in the area on the condition of anonymity.