"There was no ventilation. It was pitch dark inside and police gave us 10 mins to get into the container truck."

(Left and right) Migrant workers on the borders stand in line and rest under the open sky. Trucks in Maharashtra. Photos: By special arrangement and PTI

Mumbai: On March 31, solicitor general Tushar Mehta claimed before the Supreme Court that there was “no person walking on the roads in an attempt to reach his/her home towns/villages”.

He further claimed, under oath, that all migrant labourers had been shifted to shelter homes and are being provided with basic amenities like food, medicines, and drinking water.

But the same evening, over 1,250 kilometres away in Vapi taluka of Gujarat’s border district Valsad, around 120 labourers — women and children included — had to undergo a gruesome ordeal after they were forcibly packed into an enclosed container truck and taken out of the state limits.

A container truck has a single long cylindrical body with no air holes or scope for ventilation. Most have one or more circular lids at the top for loading and unloading liquid goods.

Following Prime Minister Narendra Modi’s announcement on March 24 that the country would be placed under lockdown for 21 days, around 120 labourers, working at a welding factory in Bengaluru set out on a road journey of over 1870- kilometres to reach their homes in Barmer and other neighbouring districts in Rajasthan. The labourers, like several lakh distressed migrants across the country, set out on a precarious journey with little money or food, with the hope to return to their homes.

What followed was a harrowing, desperate journey in which the workers say they were subject to hunger, deceit and police violence.

One of the workers, twenty-six-year-old Prakash Bishnoi, who left Bengaluru along with his wife and two young children, told The Wire that after walking for nearly six days when the family reached Vapi, they were brutally beaten up by the police and forcibly stuffed into two container trucks.

“We reached Vapi on March 31, around noon. There, we were stopped by the police and were told we couldn’t go ahead. The police gave us some food and water, we thought they were being kind and making some arrangements for us. But around 7 pm, the police suddenly came to the dhaba we were resting in and began to beat us,” Prakash alleged.

Later, he claimed, the police forced them into two container trucks parked nearby and told them that they would be left at the Rajasthan border. “We were naturally reluctant and were worried for our children. But we were not given any option. The police would charge everyone who opposed them,” says a woman, a mother of two.

Instead of taking them towards Rajasthan, the labourers claimed that they were taken 40 kilometres back into Maharashtra. “We were suffocating inside and some of us had begun to faint. Children were howling and gasping for air. And then one of us found out on the phone that we were back in Palghar. We panicked and began kicking on the container truck’s lid. One door finally opened and the drivers were compelled to stop the vehicle,” Prakash said.

One of the labourers had, in the meantime, also managed to contact a labour organisation in Rajasthan, the Aajeevika Bureau, which in turn informed the state labour commissioner who alerted the Maharashtra police. Both the Maharashtra police and Rajasthan state administration have confirmed Prakash’s claims.

The labourers were all instantly rescued and the police recorded statements of the two container trucks’ drivers. At present, more than 30 of the 120 odd labourers have been provided with shelter at a camp in Talasari taluka in Palghar district. The remaining, the police claimed, had dispersed from the spot after panicking and the police have been looking for them since. 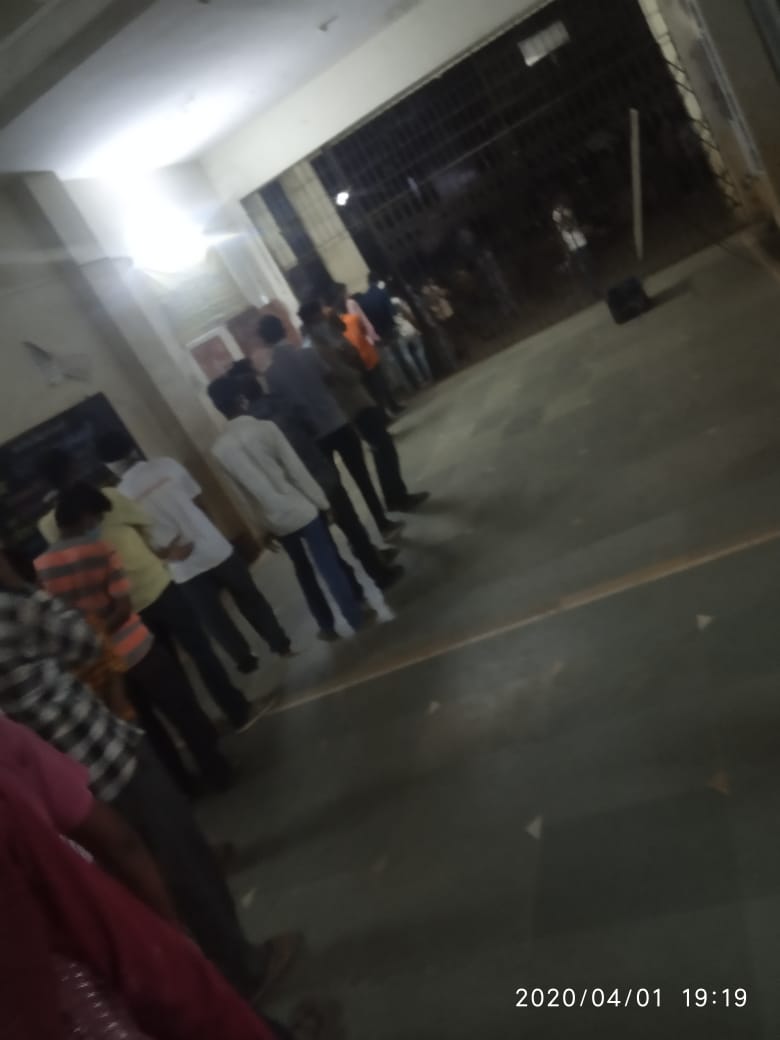 Prakash said that the Vapi police had stood next to the container truck and dragged each one of the labourers into it. They allegedly also beat up anyone who resisted. The group was divided into two. “They were two long, cylindrical container trucks with a strong smell of spoilt milk [indicating that they had so far been used to carry milk]. There was no ventilation, it had just one door. It was pitch dark inside and they gave us 10 minutes to get into the container,” he said.

Among the 120 persons, more than 20 were young children and another 20 were women. Prakash said almost all of them belong to the Gadia-Lohar, Bhisti, and Labana communities – all categorised as Other Backward Classes in Rajasthan.

These labourers worked at different places in Karnataka at welding workshops. “As the situation began to tense up, our agents left the worksite and ran back to their hometown. We were not told what we should do next. Neither were we paid,” Prakash says.

Like Prakash, another person Govind Jangu too had left his workplace and joined the crowd. “My employer refused to let us stay back and also did not pay us. We knew we would starve if we didn’t leave immediately. I called up others from my district (working in Bengaluru) and we decided that we will leave Bengaluru at the early hours of March 25,” Jangu said.

The crowd managed to cover a distance of around 80 kilometres from Bengaluru to Tumkur on the first day. “We had some food. We ate little and continued to walk. We had decided not to stop until night. So, we just walked. Children cried out of pain and exhaustion, but we did not stop, we walked,” Jangu told The Wire.

Upon reaching Tumkur, they said that a truck driver promised to drop them till Belgaum. “He asked us for a few thousand. We put in whatever money we had, and he agreed. On reaching Belgaum, the police stopped us,” said Prakash. By March 26, all state and district borders had already been sealed and there was no way out.

The Belgaum police deputed at the checkpoint stopped the labourers. Prakash alleged that some labourers were also beaten with the police baton. “They, however, felt some pity and let us go,” Prakash said, adding that they walked another 150 kilometres until the night of March 27.

“By now most of us were famished. Our food packets had exhausted and the old and tiny ones among us had given up. By now we had reached somewhere in Maharashtra,” Jangu said.

Here, Jangu said, the labourers found an empty truck and requested the person to help them cover the journey ahead. “The truck driver was scared but when we told him we would pay him as much as he wanted, he agreed. He asked for Rs 4,000 per person. We did not have that kind of money. But we told him we would pay him once we got back home. We were desperate to return home,” a labourer, in his 20s, told The Wire over phone.

After covering a few 100 kilometres, at one of the checkpoints inside Maharashtra, the truck driver fled, also taking away a huge sum from the labourers.

Rajasthan state labour commissioner Prateek Jhanjaria told The Wire that he had been informed about the incident at around 11 pm on March 31. “One labour organisation Aajeevika, which has been closely working with the community and the state government received the call. It was a distress call. I immediately called up the Palghar district collector Kailash Shinde and the police control room and asked the administration to rescue the labourers. They were soon taken to a shelter home there,” Jhanjaria said.

He further added that the past week had been stressful for the state and over 25 thousand calls had been made between March 24 and March 31 on their three helpline numbers. “Our helpline number has been continuously busy with labourers calling us from across the country seeking help,” Jhanjaria said.

At Talasari police station, police inspector Ajay Vasave told The Wire that he had been in constant touch with the Rajasthan labour department and efforts were being made to counsel the labourers under distress. “They have been constantly asking to be sent back home. It is practically not possible right now. We are only ensuring they don’t end up in the situation we found them on March 31,” said Vasave.

The Maharashtra police have put together a report on the condition in which the labourers had been rescued and have accused the Vapi police of indulging in the inhuman act of transporting labourers outside their state limits. “We have also informed the Rajasthan labour department and have asked them to raise the issue with the proper department,” Vasave said.

“Since all district borders were sealed, we were asked to not let anyone get in. But we did not abuse anyone,” the sub-inspector at the Bhilad police station said.