Abdul Karim, a Muslim resident (outside a Hindu house in the locality), said they have been living peacefully with the Hindus in the locality for ages. Photo: The Wire

Jaipur: Muslim women in Jaipur’s Rawalji ka Bazar area have accused policemen of barging into their houses, destroying property and mercilessly beating them on the night of August 13, a day after clashes in the Eidgah area of the city erupted between Kanwariyas and Muslims.

Three women – Nasreen, Shahnaz and Shafia – have written a letter to the police commissioner.

“A day after stone-pelting happened in the Eidgah area in the city, our neighbours Uma Shankar (an ex-councillor) and his brother Gauri Shankar along with 10-15 policemen broke into our house at night. Despite telling them that there’s no man hidden inside our houses, they damaged our belongings, ripped off our clothes and beaten us with lathis. They also assaulted our 15-year-old daughters and granddaughters,” reads the letter.

Shafia, 52, recalled that she was reading namaz when she heard a heavy beating on her door. Before she could discern what was happening, close to 15 policemen were already inside her house. Shafia stands outside her living room, holding her dress that was ripped off by the police. Photo: The Wire

“The policemen had lathis and guns in their hands. They were searching for some men and when they couldn’t find any, they started beating me,” she told The Wire and added that the policemen destroyed everything when they came unto her house.

“When I resisted, they pushed me outside the house and went upstairs where my 15-year-old granddaughter was sleeping. They hit her too,” she said.

After wrecking Shafia’s house, the policemen allegedly entered Nasreen’s house. “As the police got in our house, I locked my daughters inside a room and stood outside. I told them to beat me but spare my daughters,” said Nasreen.

“They hit me with the gun’s butt over my head and broke the door to get inside. One of my daughters was pregnant but despite that, the policemen hit her,” Nasreen told The Wire.

The women said that their husbands work as cooks and were out for Eid’s dawat during the incident.

“Our Prime Minister keeps emphasising that Muslim women are safe now [after criminalising Triple Talaq] but we are actually not safe even in our houses,” said Shahnaz, another woman who was beaten up by the police.

There are an equal number of Hindu houses in the area. As per the locals, the police damaged properties belonging to both the communities in order to incite people. “Major damage was done to the houses of the Muslims but the police also destroyed a wall in a Hindu house so that the blame can be put on the Muslims,” said Narayan, a Hindu resident in the area. Nasreen’s house after the incident. Photo: The Wire

Abdul Karim, a resident in the locality said there was no argument among the Hindus and the Muslims residing in the area which could escalate into a communal clash. “There was not a single Hindu man with the police that assaulted the Muslim women.”

The residents of the locality blamed the former councillor Uma Shankar for having staged the crackdown on the Muslims. “The policemen got the hammer from Uma Shankar’s house that day to break into our houses,” said Karim. “After we approached the police station to register an FIR, we saw one of the same policemen coming to Shankar’s house to inform him about the complaint made by us. We even clicked his photograph for proof,” he added.

The entire chain of events started after two men allegedly came into their locality on a bike, at around 10 pm, with a saffron flag in their hands and started waving it in the middle of the road. Soon after, the police arrived and started pelting stones at the Muslim houses. Some policemen even barged into houses in the search of men and assaulted the women and kids. Broken windows after heavy stone-pelting by the police. Photo: The Wire

According to some locals, the crackdown on Muslims and provocation of communal clashes in the city are politically motivated to bring down the Congress government. However, the alleged involvement of the police and Congress’s councillor suggests fissures within the Congress party.

The residents were also upset that the constituency’s Congress MLA Mahesh Joshi didn’t visit them even once after the clashes. Speaking to The Wire, Mahesh Joshi, MLA from the Hawa Mahal constituency said, “Communal clashes are always politically motivated. If something illegal has happened, we will take measures.”

When informed that the councillor named by the Muslim residents was a member of the Congress party, Joshi said, “I have not received any information about this crackdown so far.” 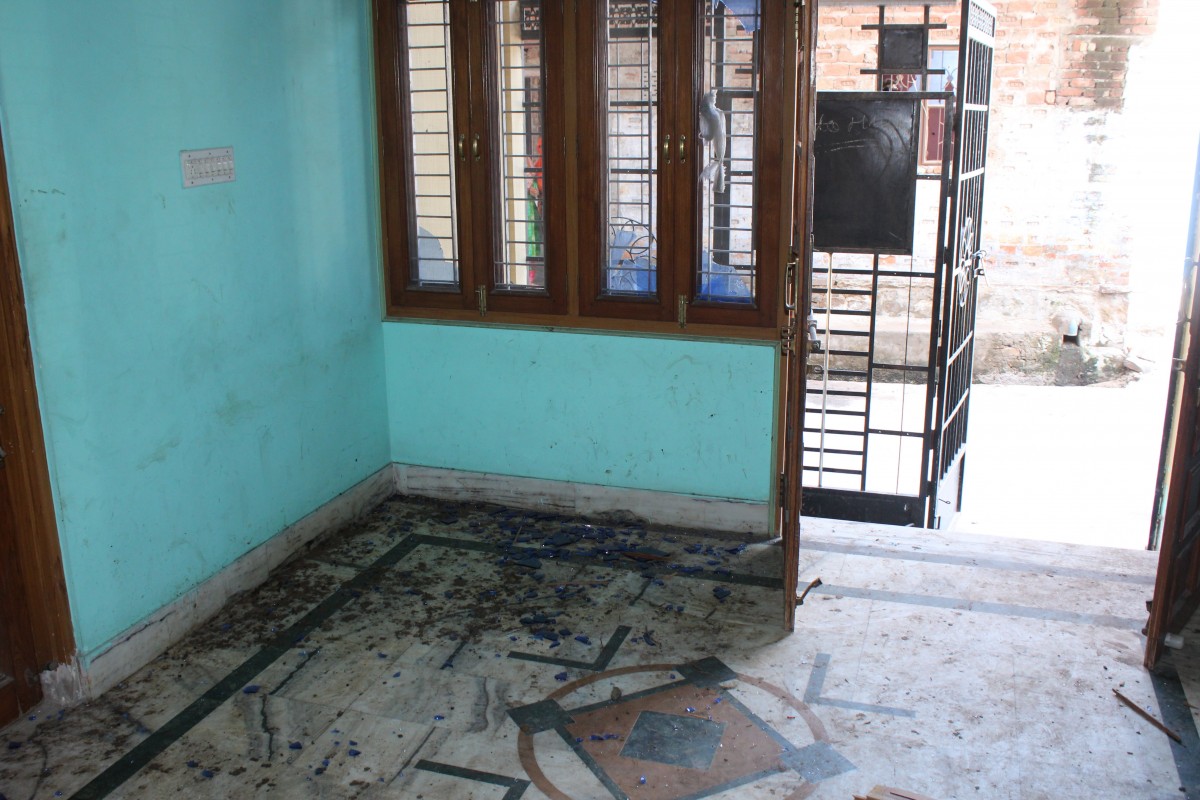 Another house in the locality that was destroyed by the police. Photo: The Wire

Despite repeated requests, the police haven’t registered an FIR in the case. After the commissioner’s assurance, the police came to speak to the women but no action has been taken yet. The women have not been medically examined either.

Police have called the allegations made by the Muslim women, baseless. Jitendra Singh, SHO at the Manak Chowk police station said, “These are baseless allegations on police. The issue was between the two communities, the police has been unnecessarily dragged into it and, so far, no complaint has reached us in this regard. One FIR is filed under sections 143 (unlawful assembly), 147 (rioting), 148 (rioting, armed with deadly weapon), 153A (promoting enmity), 295 (acts intended to outrage religious feelings) and 323 (voluntarily causing hurt) of the Indian Penal Code.”

Speaking to The Wire, the Commissioner of Police Anand Shrivastava said, “The matter is under investigation. If something is found, we will lodge an FIR.”