Rajasthan: How a Small Labour Union Helped Domestic Workers Tide Over the Lockdown

The union stepped up because state institutions have failed to provide relief when it was needed the most – securing income, shelter and employment.

Domestic workers under the Rajasthan Mahila Kaamgar Union (RMKU) meet to discuss ways to negotiate for their lost salaries during the lockdown at a park in Jaipur on May 25. Photo: Author Provided

Jaipur: A group of domestic workers gathered in Jaipur on May 25 to discuss how they should negotiate for their unpaid salaries during the lockdown period, before agreeing to return to their previous jobs.

These women were members of the Rajasthan Mahila Kaamgar Union (RMKU), a ten-year-old organisation that has played a pivotal role in assisting domestic workers to combat the distress of lockdown.

Such neighbourhood and city-level meetings were convened regularly over the last three months to find ways to offset the adverse impact of the COVID-19 lockdown.

The union has played this role largely because state institutions have failed to provide swift and effective relief where it was needed the most – for securing income, shelter or housing, and employment, the workers said.

A majority of domestic workers lost their earnings overnight on March 25, when the lockdown began. A rapid telephonic survey conducted by RMKU in early May found that 90% of the 500 workers they spoke to were not paid at all for the months of April and May, and 37% had either not received or had their wages cut for the month of March. There are an estimated 6-50 million domestic workers in India, as per different estimations, whose lives were severely destabilised by the loss of their salaries.

Of those interviewed for the survey, 80% said that their first concern was to secure earnings for food. On average, households had eight and four kilograms of rice and wheat respectively, some pulses, and 10-15 days’ worth of savings when the lockdown first began.

When they ran out of food and money, many, both members and non-members of the union, reached out to local union representatives for help. They decided to procure dry ration and other essentials from the neighbourhood kirana store using the union treasury funds. This was painstakingly built through domestic workers’ contributions.

Having an extensive local network had its virtue in the peculiar scenario that unfolded due to the lockdown. However, as the group faces a loss of earnings en masse for a long term (the sum of income for 500 surveyed workers decreased from 40 lakhs in February to 2.7 lakhs in April and May), the capacity for community support will erode.

Some (25%) received food packets organised by local political leaders and the police, and two respondents could procure ration from PDS shops (State Public Distribution System ration shops). The women reported discrimination against non-locals in both these cases on the basis of their identity as migrants and non-voters, even though a majority of them comprised of a settled population of “migrant” workers who had been living and working in the area for over 17 years.

Till the end of May, PDS allocation of dry ration (which includes rice, wheat and pulses) was yet to become accessible to this vulnerable group of citizens. There is now a scheme for temporary coupons for PDS entitlement via e-mitra kiosks; the RMKU has been on a mission to ensure mass registrations.

Even now, the absence of compensation for micronutrients, in addition to dry ration, in food relief programs is a critical gap. The workers chose to spend a total of Rs 1,600 in six weeks from their savings and they entered new debts to buy vegetables, milk, and eggs, for a diet that somewhat resembled normal times – a proxy understanding for wholesome nutrition. When health directives require building healthy immune systems to fight COVID-19, why does food security relief expect some groups to be satisfied with dry rations alone?

Rs 500 and a government order could not stop evictions

It was not just food insecurity that these workers had to grapple with as a result of lost earnings. Many faced evictions from their rented homes.

Asmita and her family were forced out in late April on the grounds of likely inability to pay rent the following month. Enabled with information and strategies from the union, they put up a fight requesting deferment, partial payment, and they invoked the home ministry’s order that disallows evicting a tenant in the middle of the lockdown. However, this did not stop their landlord.

According to the survey, by April, the average household earning reduced to zero, and close to 90% of workers could not afford to pay rent in April and May. A government order for rent waiver and a stay on evictions, without any means to enforce it in a world of informal rentals with private landlords, failed to protect people from housing-related distress. There is still nothing in COVID-19 relief and recovery programs to support rental expenses or directly secure tenure.

With limited resources, Asmita and her family resorted to living in a temporary tin shed with no water, electricity or a door to the house. She chose to keep her kids at the maternal home. The couple borrowed money to turn to vegetable vending as an alternate source of livelihood but suffered indignity and losses when rumours spread that they were infected with COVID-19.

A cash transfer of Rs 500 to the Jan Dhan accounts, under the PM Gareeb Kalyan Yojana, for April and May could only help her cover utility bills and food supplies for a week. This financial inclusion scheme of the central government reached only 16% of the surveyed women for April, and when it had, it did little to improve the situation. Asmita hopes to move, with her children, to a pucca house through the earnings from vending. However, macro data suggest vendors will also make a protracted recovery.

Return to work is marked with new uncertainties

The physically proximate nature of domestic work means that the imperative of social distancing will impact job opportunities.. Considering women’s earnings constituted 50% of the total household’s earnings and were a more stable form of income when compared to spousal income derived from casual labour, the impact on women’s work was an impact on the household itself.

Another set of challenges are concentrated at the site of work having to do with everyday work conditions and fighting prejudices and restrictions that are implemented as ‘precautionary measures’ against the spread of COVID-19.

Workers are negotiating to restore wage rates to their previous level and secure permission to work in more than one house (the norm is to work in more than one house which earns a total income of Rs 8,000 per month, on average). However, domestic workers are seen as ‘spreaders’, reflected in the antagonistic treatment from employers and RWA (Residents’ Welfare Association) rules. This, despite the fact that employers themselves may pose a health threat to workers – a direction of transmission rarely discussed or even considered. 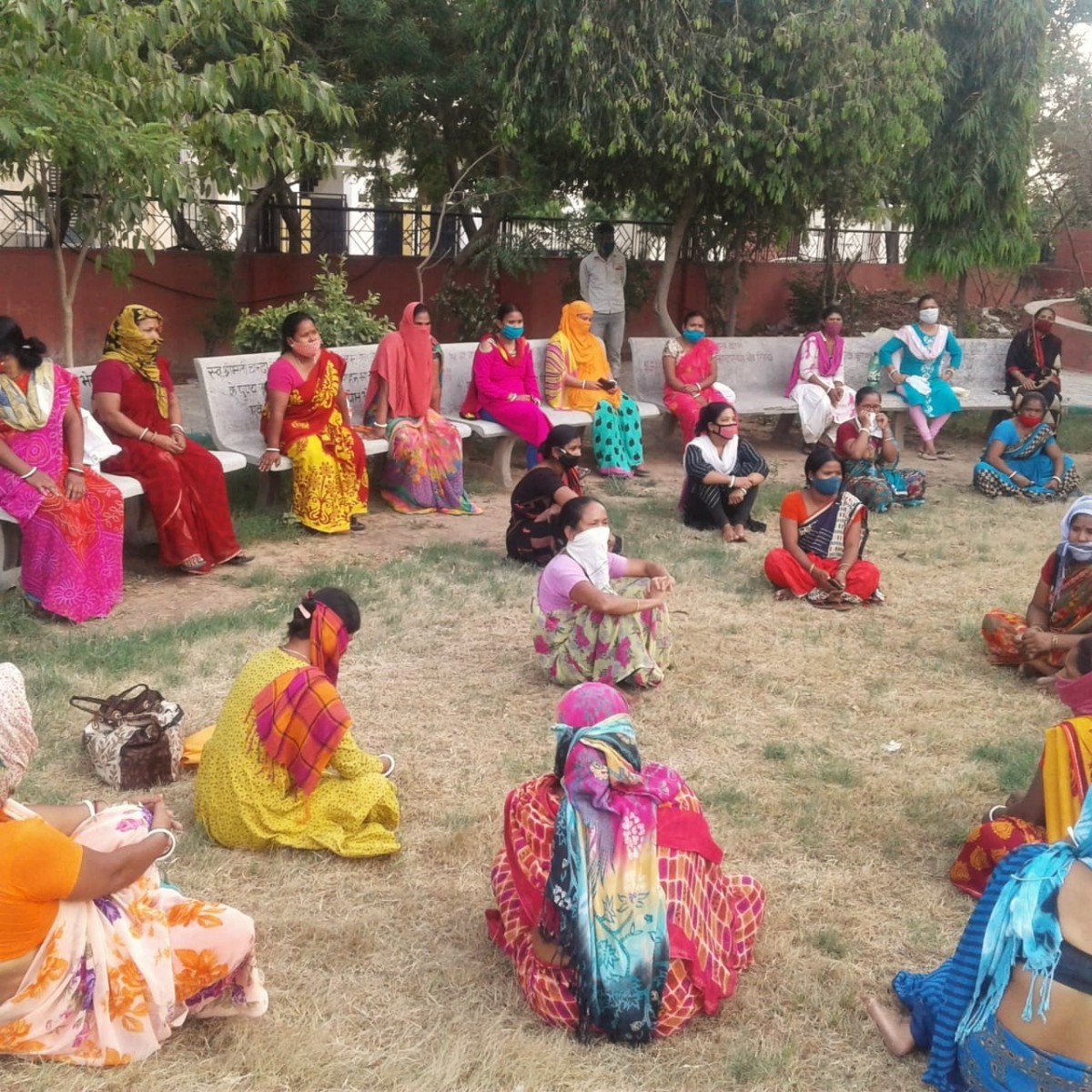 Domestic workers under the Rajasthan Mahila Kaamgar Union (RMKU) meet to discuss ways to negotiate for their lost salaries during the lockdown at a park in Jaipur on May 25. Photo: Author Provided

Urmi abruptly lost her stable job of 15 years with an employer when she mentioned that her neighbour’s son had taken ill for a few days. Her employer asked her to leave to return later, equating illness to COVID-19 infection, but never called back. Urmi could not believe that a working relationship of 15 years could be snapped so suddenly for so little. She approached the union to file a complaint, but later negotiated for three months’ severance pay with the union on the call, because of an urgent need for cash at home.

Recovering salaries while not offending the work-home is a distressing experience facing many domestic workers, whose relations with employers are unique in some ways. Pinal, a resident of Jaipur for 25 years, worked as a domestic worker in eight houses before the lockdown, earning Rs 18,000 a month. She was hesitant about asking for any payment for the last two months, fearing she would be asked to leave the job if she did so. This fear is justified and shaping the decisions of many workers like Pinal.

Pinal followed up with all her eight employers over several days to ask for her unpaid salaries, citing her financial situation and her inability to come to work due to travel restrictions. Three out of eight agreed to pay in full, three others agreed to pay only half. With the others, she invoked the possibility of lodging a complaint with the labour department for non-payment of wages and noted down their contact details in their presence. These employers later called Pinal agreeing to pay half the dues. By the end of it, both exhausted and amused by the effectiveness of this line of action, she felt a sense of relief after several weeks.

Unionisation, community support when other institutions show no grit to engage

Union meetings, such as the one mentioned at the beginning of this article, are playing a key role in helping workers return to work with dignity and hope for fair working conditions in the absence of any legal framework that engages with domestic work.

The union continues to support through mass registration for temporary access to PDS entitlements and a one-time cash transfer programme of Rs 2,500 from the Rajasthan state. This is more relief than they had a month ago, but it is still too little, too late to repair the abjection caused by the lack of relief in the early days of the lockdown.

The workers were empowered by a support system which was able to handle the negotiations COVID-19 demanded. It is a reminder as to why it is essential for workers to organise in unions to guard their interests in a political economy that has our government, policy infrastructure, employers, and philanthropic work with little will – and grit – to address their core issues head-on.

Rama, Meena, and Snehlata are full-time union workers with Rajasthan Mahila Kaamgar Union (RMKU) and Antara is a researcher with the Indian Institute for Human Settlements. This article includes inputs from Kinjal Sampat.