The two are celebrated filmmakers and well known for their work as civil society activists.

New Delhi: On September 17, the Delhi Police filed its chargesheet in connection with FIR 59 which pertains to the Delhi riots conspiracy case. Fifteen accused including Khalid Saifi, Ishrat Jehan, Safoora Zargar, Meeran Haider, Shifa-ur-Rehman, Natasha Narwal and Devangana Kalita were chargesheeted in the case and sections relating to arson, rioting, murder, sections under the Arms Act and the stringent Unlawful Activities (Prevention) Act were invoked against them.

Apart from detailing alleged actions of those already arrested, the chargesheet that runs into more than 17,000 pages consists of photographs of every single message exchanged on a WhatsApp group called DPSG (Delhi Protest Support Group) between December 28, 2019, when it was formed, till February 24 when riots broke out in North-East Delhi.

The focus on DPSG continues in the ‘Final Report’ of the chargesheet as well, which says that Swaraj Abhiyan’s Yogendra Yadav, documentary filmmaker Rahul Roy and Nadeem Khan called a meeting of organisations and prominent individuals, who were against Citizenship (Amendment) Act, at the Indian Social Institute on December 26 and discussed plans for organising women-led protests in Muslim-majority areas.

According to the chargesheet, the DPSG WhatsApp group was created by filmmaker Saba Dewan and prominent members including Rahul Roy, Yogendra Yadav, Harsh Mander and Annie Raja. The chargesheet claims that members of DPSG organised themselves in a manner to ensure that they were either physically present or remotely supervising anti-CAA protests at 24 sites in Delhi.

While insinuations and accusations are made about members of the group hatching a “terror conspiracy”, the data presented only manages to establish that the DPSG was supporting protest against the CAA and National Register of Citizens.

Senior advocate Dushyant Dave says that the entire idea behind the police investigation is flawed, biased and aimed at criminalising dissent. :If they wanted a fair investigation they should have started with the people who instigated violence. It is unfortunate that the approach the Delhi Police has taken is very anti-minority. The police has forgotten that they are bound by the Constitution and they cannot investigate in a manner which is so arbitrary and contrary to facts. They are targeting freedom of speech and right to protest.”

On September 14, a day after Umar Khalid’s arrest, the Delhi Police summoned documentary filmmakers Rahul Roy and Saba Dewan in connection with FIR 59. Roy had also been named in the supplementary chargesheet filed by the police on September 12 in FIR 50, which relates to the Jafrabad road block case.

Interestingly, the last time Roy was in the news was during the COVID-19 lockdown when he initiated one of the largest civil society relief projects in the country under the banner of the Gurgaon Nagrik Ekta Manch that was distributing dry rations kits and cooked meals to migrant workers and daily wagers who had been left stranded without any means of livelihood. They set up three kitchens in the suburb which produced 25,000 meals a day. Thanks to this initiative, more than 20 lakh cooked meals and 40,000 dry ration kits were distributed to migrant workers.

“I think it is absolutely ludicrous that someone who stands for peace and justice and has been running community kitchens during the lockdown should be seen,  in any way, to be connected to the violence when those who have been documented as indulging in violence are roaming free,” says documentary filmmaker Anjali Monteiro, who recently retired as dean of the School of Media and Cultural Studies at the Tata Institute of Social Sciences, Mumbai.

National Award-winning filmmaker Anand Patwardhan claims criminalising dissent has become a new art form for the police. “Rahul and Saba have for decades made films on gender and working class issues and have raised their voice against communal violence. It is completely absurd to insinuate that they instigated riots. In fact, I believe the opposite is true. They were fighting against hate speech and the Citizenship (Amendment) Act, like so many citizens all over the country. You cannot be criminalised for that. It looks like the Delhi Police is competing with the Uttar Pradesh police. Criminalising dissent is their new art-form.” 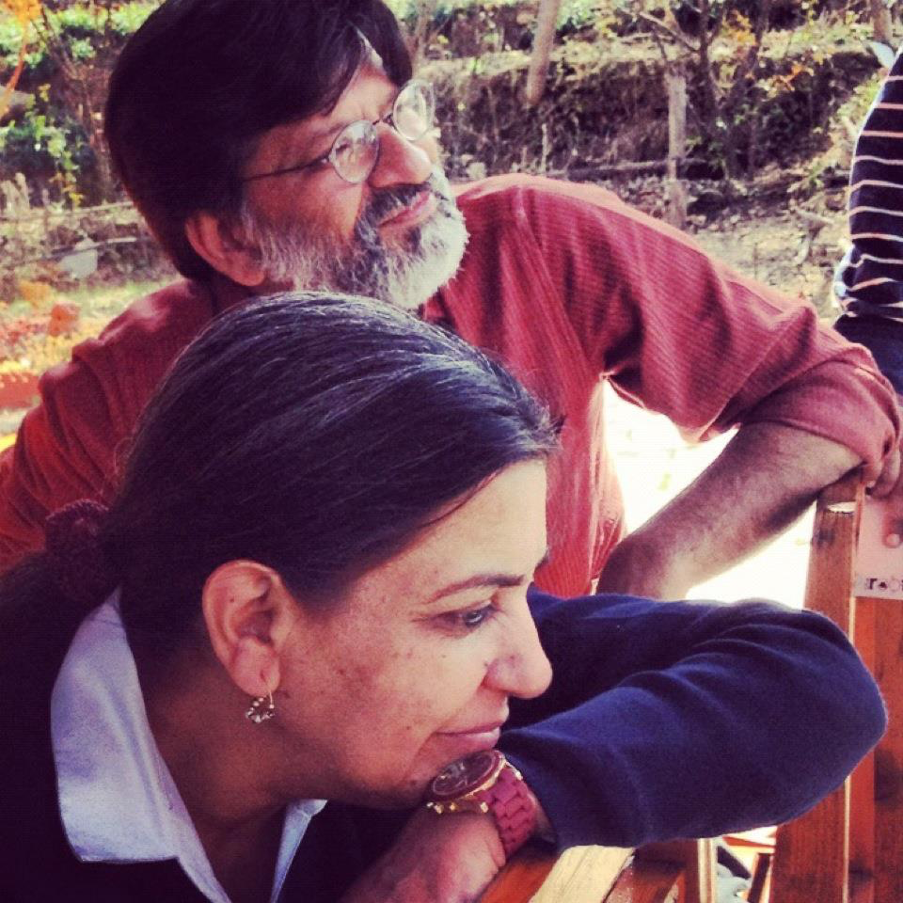 “They are filmmaker scholars. They are not in the realm of journalistic filmmaking and they chose the path when it wasn’t easy,” says Bina Paul, who is the director of the Kerala International Film Festival and a National Award winner herself. “It is very surprising that people who we would want to treasure as part of our cultural landscape are being questioned in this manner. These are people who are deeply embedded in the understanding of society and expression of voices. When you hit at these people you are hitting at the roots of civil society.”

Dewan, who also happens to be Roy’s partner, is being dragged into the net by the Delhi Police because she was the one who formed the DPSG WhatsApp group. Ironically, Dewan was the driving force behind the ‘Not In My Name’ campaign, launched in 2017, against rising incidents of mob violence, lynchings and cow vigilantism.

Dewan’s rallying cry for public intervention and justice came as a response to the murder of 15-year-old Junaid on a Mathura-bound train from Delhi. The Muslim teenager and his companions, who were travelling home for Eid, were repeatedly stabbed and their bodies were flung onto the platform at Asoti Railway Station. Dewan’s call asking people to gather at Jantar Mantar in Delhi for a protest inspired rallies in Kolkata, Bangalore, Jaipur, Chandigarh, Mumbai, Lucknow, Allahabad, Thiruvananthapuram and Hyderabad.

Sabeena Gadihoke, professor at the AJK Mass Communication Research Centre, Jamia Millia Islamia, remembers vividly the impact of the rally. She describes how Dewan, overwhelmed by emotion, could only say to Junaid’s family, “Hum sharminda hain (We are ashamed).” It was a profoundly moving moment for all gathered there, remembers Gadihoke, who herself was moved to tears. “This one moment has stayed with me because Saba was expressing something that everyone gathered there had spontaneously felt,” recalls Gadihoke.

Historian Ramachandra Guha, whose New India Foundation supported Saba Dewan’s book Tawaifnama, says he is shocked that someone like her is being questioned in a riots conspiracy case. “I know Saba as an outstanding filmmaker and writer who like many citizens is deeply committed to communal harmony. She is incapable of violence and what the government is doing by going after people like her is in part to distract attention from the state of the economy and from the perilous state of our defence. They want to implement the Gujarat model on the national level and snuff out any dissent,” he says.

While the Delhi Police claims the DPSG provided a “secular façade and naxal genes of violent resistance to an otherwise radically communal agenda”, retired Jawaharlal Nehru University professor Chaman Lal sees it as intimidation of true patriots of the country. While sharing anecdotes on Dewan’s grandfather Chhabil Das, who was a mentor to Bhagat Singh, Lal regrets that families of freedom fighters are being harassed. “Saba has the spirit of her grandparents – Sita Devi and Chhabil Das. I feel pained about what is happening to her.”

Both her parents were nationalists. Her mother, Manorama, who came to India during Partition, is a well-regarded author while her father, Dewan Berindernath was a very popular columnist. Says Chaman Lal, “People who have contributed to this country are today being targeted by the traitors of the freedom struggle and traitors of the Indian people. This is a government of traitors that is torturing the real patriots.”

As the Delhi Police zeroes in on filmmakers, academicians, lawyers and activists who were a part of DPSG in the Delhi riots conspiracy case, it has conveniently ignored that it was in response to Roy’s petition that the Delhi high court directed the police to ensure a safe passage for the injured to hospitals. It was Roy who went knocking on the doors of the high court on the intervening night between February 25 and 26 after it emerged that the police was not allowing ambulances to enter riot-affected areas.

Advocate Suroor Mander, who moved the petition on behalf of Roy, recalls how they ended up at the doors of Justice Muralidhar for a midnight hearing. “We started getting calls from Al Hind Hospital in Mustafabad at 5 pm on Februrary 25 evening saying they were in urgent need of ambulances and they did not have the capacity to deal with the kind of injuries that people were coming in with. By 9 pm, they called saying they had more than 25 people in a critical condition and two dead bodies.”

Suroor says Roy was guiding civil society efforts to provide rescue and relief as more and more incidents of violence got reported. “He was also instrumental in organising a medical van which got detained at the Dayalpur Police Station. The SHO said that he did not have permission to allow vehicles into the area. This was Dayalpur and we needed to get ambulances in Mustafabad. At this point we realised that jurisdiction would be an issue even for the district magistrate. We decided to move the high court and Rahul Roy became the petitioner.”

While inconvenient for the Delhi Police, these facts are in the public domain and cannot be ignored while preparing a report on the Delhi riots that claimed the lives of 54 people, left more than 200 injured and caused damages worth crores.