Punjab's History Explains its Support for the Rights of Kashmiris Today

From scholars to farmers' organisations, a number of groups have expressed solidarity after Jammu and Kashmir's special status was revoked. 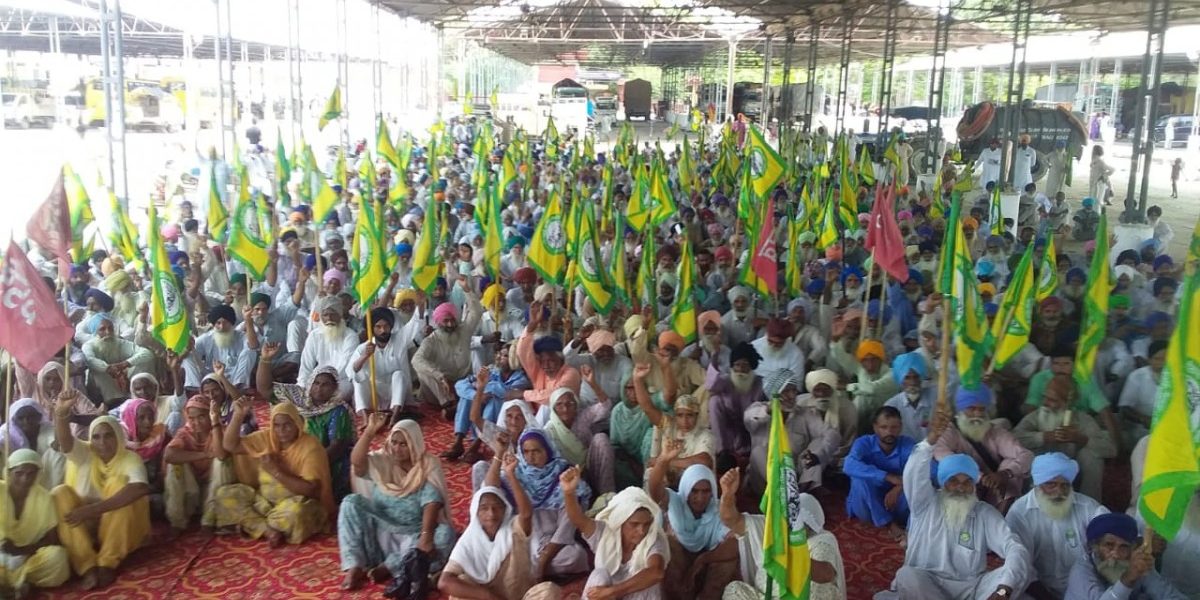 New Delhi: The Left and Sikh organisations in Punjab spent three decades at odds with each other over militancy in the state but agree today on one cause: their condemnation of the Centre’s decision to revoke Jammu and Kashmir’s special status and divide the state into two Union territories.

Though they have not formally come together for any joint programmes, each has been quite vocal in condemning the Modi government’s moves on J&K.

“Various democratic organisations of Punjab decide to stand in solidarity with the people’s movement of Kashmiris,” stated a joint press statement of 15-odd organisations ahead of a protest march scheduled for September 15 in Chandigarh.

“We will stand tooth and nail against any move of the Modi regime’s agenda of Hindutva that it is spreading in the name of ultra-nationalism, putting the lives of Kashmiris at stake now,” Lachhman Singh Sewala, general secretary of the Punjab Khet Mazdoor Union, an offshoot of CPI (ML) (Liberation), said.

“The vested forces earlier tried to divide the people of Punjab on communal lines during the days of militancy, when the men from the security forces as well as from amongst the boys spearheading the movement had died in thousands,” he added. 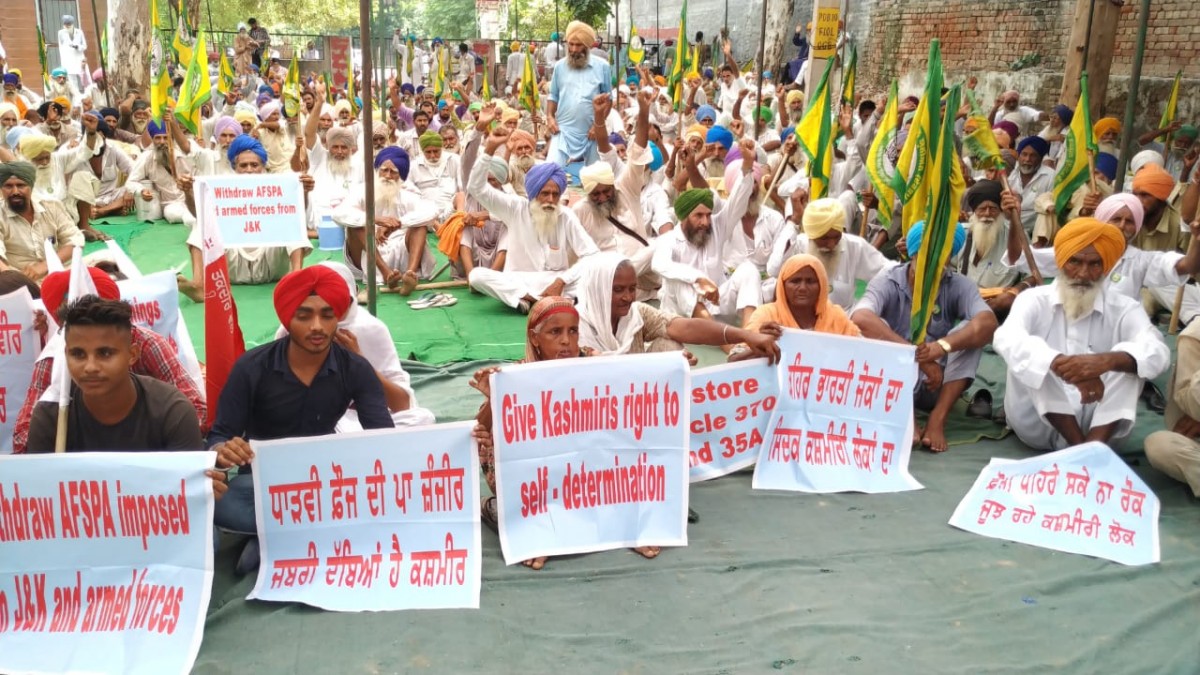 Eleven Left organisations from Punjab, under the banner of ‘Solidarity Committee for Kashmiri National Struggle’, have even come out in favour of the “right to self-determination of the Kashmiris”.

“Reach Chandigarh on September 15,” read posters carrying pictures of pellet-ridden and bandaged Kashmiri children. “Come out and dare to support the Kashmiri national struggle for the right to self-determination and against the occupation and repression of Indian rulers,” read another.

Also read: Federalism is at the Heart of DMK’s Tryst With Jammu and Kashmir

On Thursday, the Punjab and Haryana high court, in response to a public interest litigation on the issue, said:

The interim order of the court’s division bench headed by Chief Justice Krishna Murari further sought an assurance from the state police and UT police for “adequate steps to ensure that no damage is caused to any public property nor the life and liberty of any of the citizens is put in a jeopardy”. 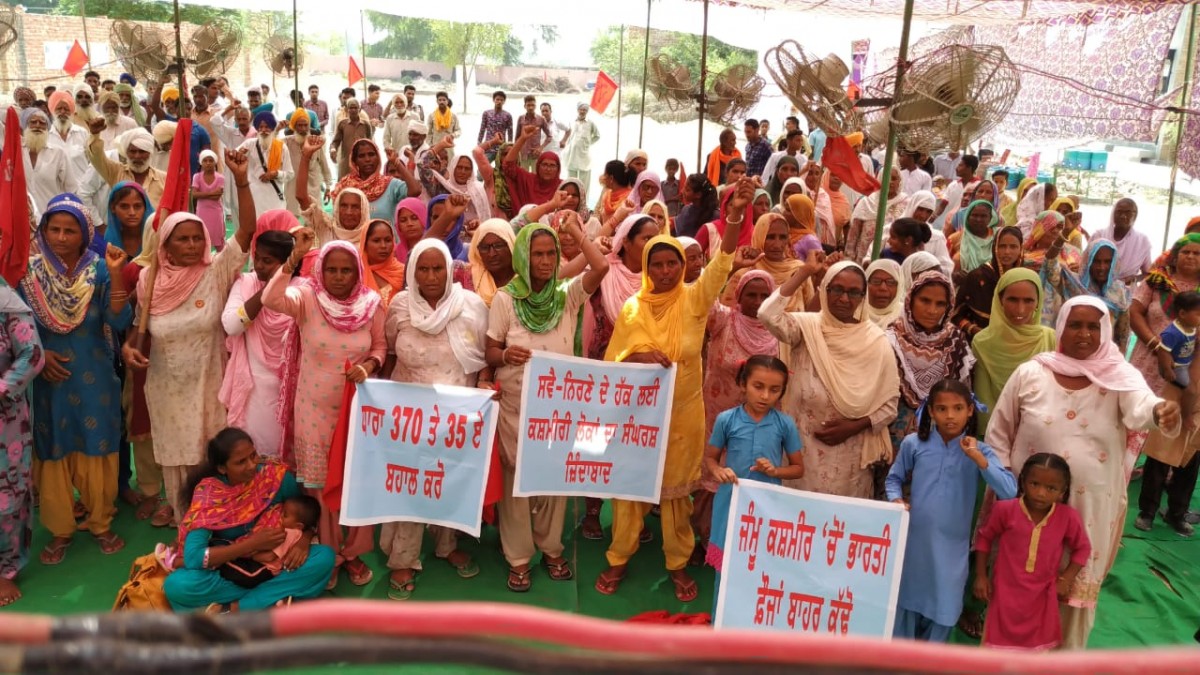 Starting from September 3, various organisations, mainly farmers’ groups, had organised a week-long protest march across the state in solidarity with the Kashmiri people.

In Bathinda on September 10, around 1,500 protesters came together under the banner of the Bharatiya Kisan Union Ekta Ugrahan. They raised slogans like ‘Kashmir Kashmiri lokka da, nahi Hind-Pak dia yokka da (Kashmir is of the Kashmiris, not of the Indian or Pakistani agencies)’, ‘Kashmiri lokka nu swayam-nirnay da haq deo (Give the people of Kashmir the right to self-determination)’.

‘Because the Sikhs saw it all…’

The sharp reaction to the reading down of Article 370 first came the very day after it happened, from three independent Sikh scholars. Gurtej Singh, Gurdarshan Singh Dhillon and Jaspal Singh Sidhu held a joint press conference in Chandigarh.

“The ruling elite of the Indian state is only concerned about the land of Kashmir and not its Kashmiri people,” Dhillon, a scholar of Sikh history, said at the press conference. “The maximum violation of human rights is taking place in Kashmir now, where pregnant women do not have access to doctors and children are deprived of milk.”

He then even compared the clampdown in Kashmir to the Army’s “Operation Woodrose” in Punjab in 1984, during which he said about 30 young children were non-judicially arrested and kept in a Ludhiana jail.

“I remember one Mrs Chattopadhyay, a human rights activist, who moved the Supreme Court and led to the children being released,” he told The Wire.

Also read: Why BJP Did Not Trifurcate Jammu and Kashmir

On August 12, a week after the J&K clampdown began, Punjab chief minister Captain Amarinder Singh made headlines for hosting a lunch for Kashmiri students on Eid-ul-Zuha.

Singh told the students, “We cannot replace your families but I hope you consider us as your family too. I assure you of your safety and security in Punjab.”

“You may write whatever, but I say the Sikh psyche always reacts to exploitation of a particular community, anywhere in the world,” said a senior journalist who works with an English newspaper, asking not to be named.

He backed his argument by citing events that took place after the Pulwama attack. Hundreds of Kashmiri students from Uttarakhand and Ambala in Haryana were rescued from mobs by members of a Sikh voluntary group, Khalsa Aid Foundation, and brought to a gurudwara in Mohali before they were sent back to their families in Kashmir. On August 12, Akal Takht jathedar Giani Harpreet Singh was quoted as saying, “It is the religious duty of Sikhs to protect Kashmiri girls.” The was a reaction to statements from an Uttar Pradesh Bharatiya Janata Party MLA and Haryana chief minister Manohar Lal Khattar on how party members could now marry Kashmiri girls.

Senior TV journalist Harmeet Shah Singh also argued in DailyO that the support for Kashmiris came “Because the Sikhs saw it all”. He also talked about how a Sikh leader, Guru Tegh Bahadur, sacrificed his life for the sake of Kashmiri Pandits in 1675.

“Remember, the Sikhs have had their share of similar experiences with Indira Gandhi,” he wrote, comparing the Kashmir clampdown to Punjab in 1984.

Radical Sikh groups have also joined the fray in condemning the Centre’s actions in J&K. On Thursday, Sikh Siyasat News quoted the Dal Khalsa’s open letter to United Nation Human Rights Commission head Michelle Bachelet as saying, “Kashmir continues to be a concentration camp for the last 40 day…the heaven on earth has been turned into a living hell.”