Punjab’s Industries and Commerce department says across five cities, 41,441 industrial units have been affected by the Railways' decision to halt services citing protests by farmers as the reason. Farmers from Punjab stage a protest outside Krishi Bhawan after they walked out of a meeting with Agriculture Secretary over the new farm bills, in New Delhi, October 14, 2020. Photo: PTI

Chandigarh: An excel sheet prepared by Punjab’s Industries and Commerce department is enough to reveal the state’s financial ruin due to the suspension of goods trains that has entered its 50th day as on November 20.

The sheet, shared by the industries department with The Wire, has pegged the estimated loss of production and exports to the tune of Rs 21,391 crore due to non-movement of goods trains that remain suspended since October 1 as a result of the stalemate between the Centre and Punjab farmers’ organisations over the contentious new farm laws.

Astonishingly, the colossal figure is only an estimate of the losses until November 2. The latest figure is being compiled and will take a few days, informed Alok Shekhar, principal secretary, industries and commerce.

On how the state’s industry is coping with the huge losses, Shekhar said that everyone is trying to find their own ways to deal with the situation.

But the situation on the ground is extremely damaging. Ludhiana, which is a major hub of industrial activities in Punjab, tops the state with an estimated loss of Rs 16,730 crore due to non-movement of trains, reveals the industries department report.

The government’s report also revealed that the basic iron and steel rate has been increased by Rs 4 per kg due to a shortage of raw material, which is affecting Ludhiana’s engineering and non-ferrous industries.

Exporter and importers have faced the brunt of the loss. Neither are goods being delivered to vendors nor have the payments been made to the sellers.

The government’s estimate is based upon feedback from the local industry and 8,000-9,000 export-import containers of textile and cycle parts are stuck at local yards as well as far away ports due to non-movements of trains.

MSMEs are bearing an extra cost of 20% on account of freight by road transport, which is adversely impacting finished goods cost. New orders are decreasing drastically and even affecting the seasonal textile industry very badly, according to the report.

Ajit Lakra, president of Ludhiana Knitters Association, told The Wire that there is one container freight station in Ludhiana. All the exports of hand tools, textile and cycle industry are filled into containers and go to the ports of Mumbai, Gujarat, Chennai and other destinations to be transported to the Middle East, the US, Europe and other international destinations. All these containers have also been held up, said Lakra adding that due to the prevailing anti-China sentiments in many parts of the world, there is big scope of business for India. But whatever orders came in the past few months could not be delivered on time, he said.

“We have not only lost financially but our reputation as traders too has suffered due to the existing stalemate. The opportunity that was there to grab as an alternative to China has already been dashed. Even the domestic market suffered due to the suspension of goods trains,” he said.

Lakra said that some units are trying to use road transport but the rates of truck freights have skyrocketed. Time is also a constraint because trucks take a lot more time than trains to reach the destination.

“Also, using a 40 feet or 20 feet container is much cheaper than sending goods through trucks,” he added.

The famous sports goods industry of Jalandhar has also been disrupted. As per information received from the Industrial Associations of Jalandhar, export worth an estimated Rs 3,500 crore have been affected so far. Besides, a loss of Rs 100 crore in production is also estimated.

As per the report of the industries department, if the movement of trains is not be resolve soon, then the industry in Jalandhar will have to bear extra expenses, penalties and the probability of cancellation of further orders.

As per the information received from the Industrial Association in Gurdaspur’s Batala area, the local industry has suffered a huge setback because the cost of basic raw material i.e. pig iron, CI scrap, hard coke and steel, has increased from Rs 3,000 to Rs 6,000 per ton, resulting in estimated losses in export and production of around Rs 300 crore.

Industries in the Kapurthala district, as mentioned in the government’s report, too have come to a virtual halt. Many prominent industrialists believe that the current crisis has adversely impacted the working capital and liquidity in the market as the exporters usually receive their payments from customers after they send them bills of landing, which is possible only once the container is loaded in a vessel. Further, continuing this crisis would mean the closure of industries, ruin of investment, decrease in jobs and capital from Punjab that it can’t afford at this stage. 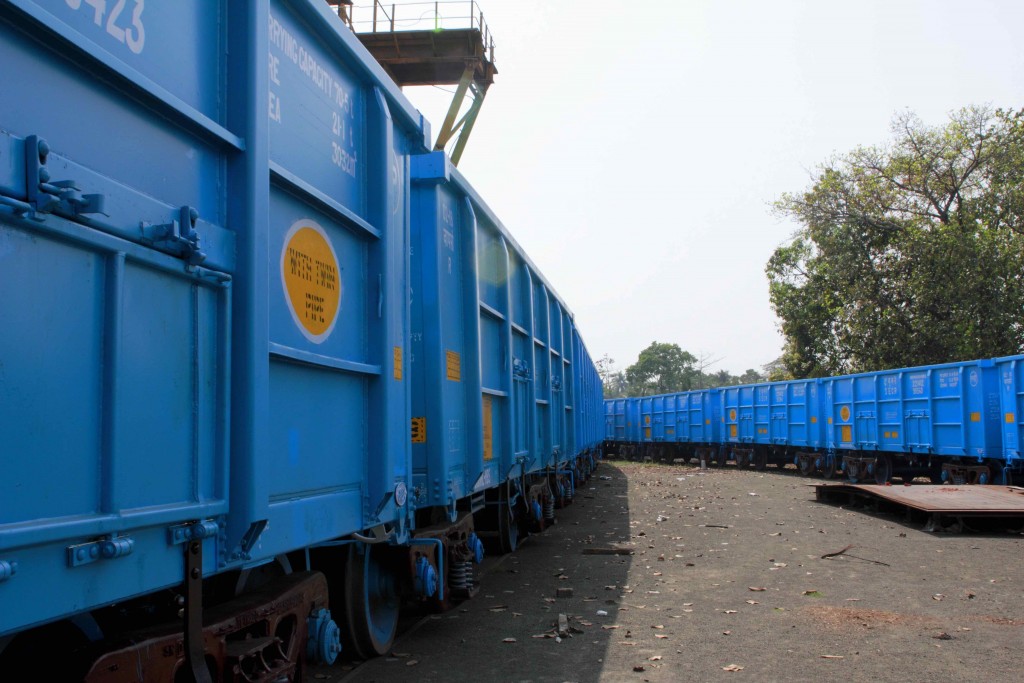 Railways bled too, but who cares?

The Railways also cited revenue loss to the tune of Rs 891 crore and total earning loss of Rs 2,200 crore due to the suspension of goods and passengers trains in Punjab. This was revealed by the data shared by the public relation department of the Northern Railways, under which the Punjab area falls on Friday.

It stated that a total of 3,850 freight trains could not be loaded ever since the farmers’ protest on railway tracks resumed from October 1.

As many as 230 loaded rakes are stuck outside Punjab, which includes 78 of coal, 34 of fertilizers, 102 of steel and other commodities.

Of this, shortage of coal supply has had a ripple effect on Punjab’s power generation. The Punjab State Power Corporation Limited (PSPCL) chairperson A. Venu Prasad told The Wire that all five thermal plants of the state have been shut down due to the lack of coal supply. “We have already suffered financial losses of Rs 200 crore after buying expensive electricity from the central exchange grid, therefore bleeding the institution,” he said.

Even as the damages rise to colossal levels, Railway Board chairman V.K. Yadav said during a virtual press conference on November 7 that the statements from both the protesters and the Punjab government are similar — run only freight trains. “The railways cannot operate in such a manner. If tracks are clear, they should be clear for both freight and passenger trains,” Yadav added.

He said protesters still remained on the tracks at one railway station and had assembled just outside station premises in 22 other places, threatening to move to the tracks if passenger trains are allowed. He ruled out the possibility of starting operations in such a situation.

Balbir Singh Rajewal, president of the Bhartiya Kisan Union (Rajewal), which along with 29 other farm organisations refused to allow passenger trains in Punjab during their meeting on November 17, told The Wire that the refusal of the Centre and the railways to resume freight trains operations in Punjab is a ‘ploy’ by the Narendra Modi government to defame the farmers’ protest and break their agitation.

“But this will never happen as we are more determined to continue our fight,” he said.

Rajewal said the farmers in Punjab have shown the way to fight the Centre’s “autocratic decisions”, by “embarrassing” it at the national and international stage.

“That is why the centre is hell-bent on harming Punjab’s economic interests and ultimately putting the blame on us. Otherwise, what stopped the railway minister from starting the goods train when we had cleared the tracks way back on October 21?” asked Rajewal.

“We had a meeting with Central ministers on November 13 but they were not ready to take back the farm laws,” he added

He emphasised that the Modi government does not know that Punjab is the land of great movements. Several members of Modi’s cabinet had an illusion that the protests in Punjab will die down once paddy harvesting begins and wheat sowing starts.

“But our strength has only grown, which clearly shows how upset farmers are with these so-called agriculture reforms that will only snatch away our assured income and funds meant for rural development,” he said.

On why the farmers do not want passenger train to resume, Rajewal said that this is their way of opposing the Centre’s contentious laws.

But passenger trains were anyway not fully operating in Punjab due to the spread of COVID-19, he said. “If you see the total revenue loss of the railways, 90% of it is due to the suspensions of goods trains. The stubborn attitude of the Centre that they will either operate freight and passenger trains together or none is another sign of an autocratic mindset that we will continue to fight till the very end,” said Rajewal.

As per the railway department’s data, the revenue loss due to the cancellation of passenger trains is Rs 67 crore, against a loss of Rs 834 crore due to the freeze on the movement of freight trains as on November 19, 2020. Farmers sitting on railway tacks in Amritsar in Punjab to protest the three farm laws passed by parliament during the monsoon session. Photo: PTI

All eyes on November 26 Delhi showdown

Punjab chief minister Amarinder Singh in his statement on November 19 expressed disappointment over the refusal of the farm outfits to completely lift their rail blockade, which has brought the state to a virtual standstill for the past month and a half, causing immense hardship and losses.

Even though he later urged the Centre not to link passenger trains with goods trains, there is no positive response from the Centre yet. Now, the focus is on the farmers’ November 26 ‘Delhi Chalo’ protest call, to which thousands are likely to respond.

Though the Delhi Police has already denied the farmers permission to hold a protest at Ramlila ground, Sukhdev Kokri of the BKU-Ekta Ugraha said that it does not matter. “Governments often impose hurdles to movements like this, but we have already made up our mind. We will not stop and march with full force on the morning of November 26, said Kokri

He said the farmers will march towards Delhi from two sides – one from Dabwali and then other from Kanouri towns. Both these towns are on the Punjab-Haryana borders and have a direct route towards the national capital, he said.

“We have a target of at least 1.5 lakh farmers. With the response that we are getting, we will likely cross the target,” said Kokri. He said that during a routine protest in Sangrur on Thursday, 35,000 farmers participated, which he said is an indicator of the degree of discontent with the Centre’s laws.

Jagmohan Singh of the BKU-Dhakunda said that the farmers will take their tractors and travel towards Delhi from all sides of Punjab.

“We hope that we get a chance to raise our voice by entering the national capital. However, if we are stopped at any place, we will sit there indefinitely and stage a peaceful dharna,” he said.

Darshan Pal of the Joint Kisan Morcha said that the entire country will witness the “historic struggle” of the farmers on November 26, which is also celebrated as Constitution Day. He said the movement against the “anti-farmer laws” has now reached a decisive phase. Farmers across the country are arriving in the national capital for an indefinite struggle under the call of “Delhi Chalo”, he said.