“We have no money, no job and the government left us on our own. What should we do?"

Migrant workers rest on the side of the road in Punjab.

Jalandhar: Raghbir and Jyoti Singh console their three-year-old baby with biscuits and place him on a bicycle. They used to work in a factory in Ludhiana, and are walking home to Jhansi in Uttar Pradesh (UP), approximately 850 km from Punjab.

Behind the couple are other members of their family – three other couples and their children, as well as a few friends. They are all walking with bags, sacks and buckets either in their hands or loaded on their heads. They are surviving on biscuits and rusk, with no other food to eat.

The women, while calming down their babies, take refuge under a highway bridge. “Delhi is 307 km away from Phagwara, while Jhansi is 500 km away from Delhi. This means a journey of approximately 800 km. It is tough but we will reach home in another 8-10 days. Hum paidal paidal jayenge, bhookhe mar rahe hain, par jayenge (Though hungry, we will keep walking till we reach home),” one of them says.

The nationwide lockdown has brought with it countless stories of migrant labourers’ plight. Punjab has been no exception.

Also read: The Lockdown is a Dangerous Experiment, India’s Democracy Will Not Emerge Unscathed

In Punjab these days, labourers walking home along national highways – to reach Uttar Pradesh, Bihar and Jharkhand – are a common sight.

Sunil, a tailor from Ludhiana, is walking home to Fatehpur in UP along with his friends. “We have no money, no job and the government left us on our own. What should we do? Sit and stare at the four walls of the house? Worst case we will die, but we have to go home. Our factory owner deserted us, the government was not bothered, the reality is that we are nobody’s concern.” 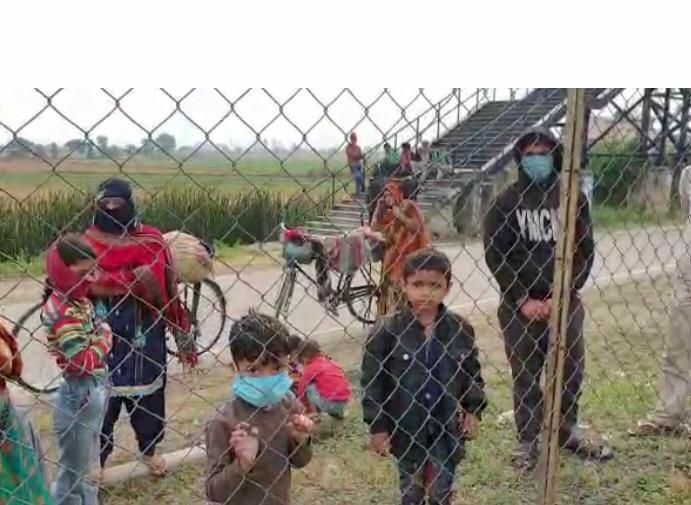 Migrant workers who are walking home.

Another group of labourers somehow reached the Shambu border, dividing Punjab and Haryana, but were then asked by the police to turn back. “We have nowhere to go and decided to stay near the fields with our families. We don’t have any food or water. The government should explain how we are at fault,” said an emotional Anil Kumar.

Another labourer, who didn’t wish to be named, was heading home from Phagwara to Patna, Bihar on his bicycle. A bucket and a small gas cylinder hanging from either end the cycle’s handle bar and carrying a sack full of ration, he broke down. “Back home, my wife, two kids and elderly mother have been awaiting my return. But neither do I have the money nor the resources to keep living here. I am carrying the ration – flour, rice, pulses, sugar – that I got here from various sources, but I feel helpless.”

Similarly, there were people who were heading to Jammu and Kashmir from Haryana. Mohan Lal, a resident of Udhampur, said that he along with six other men started their journey by foot from Jagadhri in Yamuna Nagar on May 2 afternoon and reached Jalandhar at 8 pm on May 3.

“We even tried getting curfew passes being issued by the deputy commissioner, Yamuna Nagar, but to no avail. Later, we managed to hire a vehicle for Rs 1,200 from Yamuna Nagar to Sirhind and spent another Rs 1,300 for the journey from Sirhind to Khanna but the driver left us way before our destination in the dark, after which we kept walking up to Jalandhar. Starving for food and water, when we reached the Jalandhar-Pathankot bypass heading towards Pathankot, the police stopped us. After making repeated pleas, somehow, they allowed us to move. We will cover 500 km by foot and reach Udhampur within the next 5-6 days,” he said.

Migrant workers who are walking home.

Interestingly, even though the Punjab government left the migrant labourers in crisis, Captain Amarinder Singh tweeted, “I will be taking up the matter with Centre to take immediate steps for the safe and early departure of migrant workers, desirous of leaving, to their respective states. Punjab government will look after you in every way till GoI makes necessary arrangements, I request all to cooperate.” (sic)

Earlier on May 4, Congress president Sonia Gandhi announced that every Pradesh Congress Committee shall bear the cost of rail travel of every needy worker and migrant labourer.

All photos by Kusum Arora.