Waiting for Lovepreet, the Young Man Who Likes to Feed People

The 21-year-old was arrested under UAPA charges in May last year.

New Delhi: Satnam Singh was a few hours away from calling it a day as a daily-wage labourer or mazdoor who works in farms. His sister, Sukhvinder, was working close by. The siblings own no land of their own.

Their youngest brother, Lovepreet, called Satnam to ask how much sauda or groceries he should buy for home. “Since Lovepreet earned the most, he was always the one to buy sauda,” said Sukhvinder.

Lovepreet worked in a shop that fits out CCTV cameras.

Satnam and Sukvinder made their way home at night. Their day began at dusk and ended late, for which they earned Rs 200 apiece. They found a worried family. Lovepreet had not returned home. 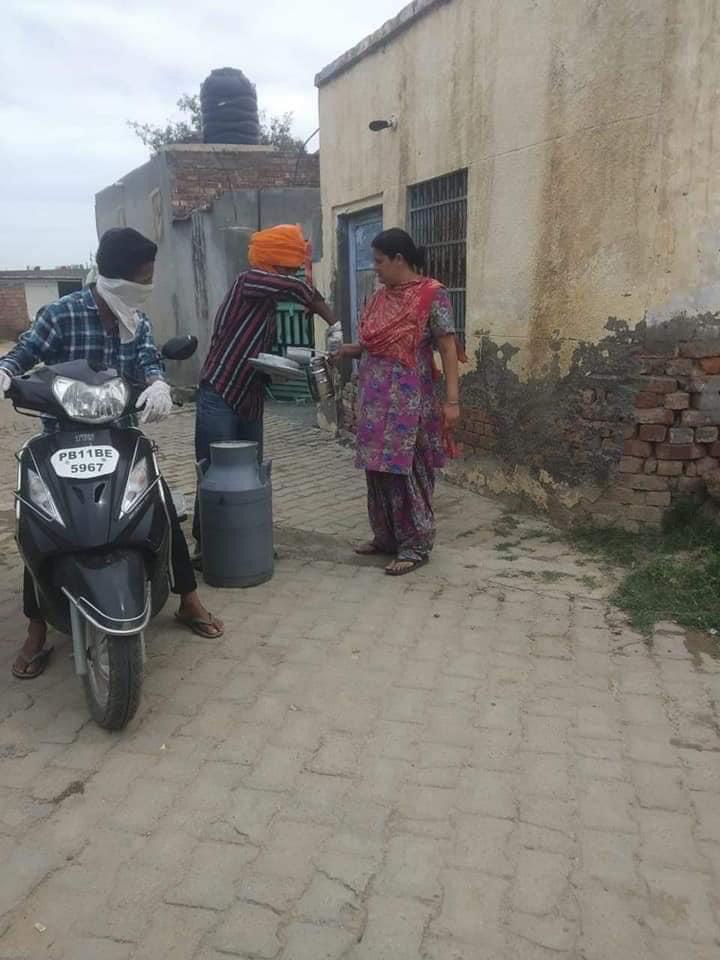 Village intelligence, though, reached them with a chilling message: Delhi Police had picked up their youngest brother, the baby of the family, 21-year-old Lovepreet.

It would take days of Satnam running from pillar to post before he got a confirmation of his brother’s whereabouts. Their mother fell ill, uncertain and fearful of the ability of a family of daily wagers to fight such serious charges. Her children had no access to lawyers and were not financially equipped to unravel the complicated law – the dreaded Unlawful Activities (Prevention) Act (UAPA) – that had put Lovepreet out of their reach.

Lovepreet is in jail, and has been for close to a year. He was most probably tortured after arrest. It is not easy to sketch a portrait of someone who is no longer visible to the world.

Something emerges from talking to those close to him or still in touch with him: Lovepreet loves to feed people. The idea is one of the unique features of the Sikh faith – seva or care for others through langar or community projects. Lovepreet regularly participated in serving langar, where young bodies are always welcome. In January, he took permission from their father to participate in a langar in Delhi. “He said he has to go do seva in Delhi; he will be back in a few days,” recalled Satnam.

The langar was at Shaheen Bagh. That was Lovepreet’s first stumble.

Photos of a thin Sikh boy, not quite a man yet, in a saffron turban and jeans, standing next to large degchis, went viral. Sikhs, a respected minority, were siding with Muslims, a minority the ruling Bharatiya Janata Party (BJP) had successfully othered – or so it thought.

Lovepreet’s second stumble came a few months later. He put up a page on Facebook on May 18, 2020. The page was a public one, and Lovepreet made a photograph of Jagtar Singh Havara the profile photo. Havara is serving a life sentence for the assassination of Beant Singh, a former chief minister of Punjab who was killed in a car bomb in 1995.

On this page, Lovepreet posted a video that showed people, including himself, marching and shouting ‘Khalistan Zindabad’ at a rally. He also posted photos of the damage to the Golden Temple after Operation Blue Star, besides messages from Jarnail Singh Bhindranwale.

Lovepreet also put in a few links in a WhatsApp group of known Khalistani sympathisers and members of a banned group.

A month after his Facebook page went up, Lovepreet was picked up by the Delhi Police’s special cell from the border of Haryana and Punjab. His family was not informed.

He was produced in a Delhi court a day later. Police managed to get custody of him for the next three days. Back home, Satnam and Sukvinder were clueless on how to establish contact with their brother. The siblings eventually got in touch with United Against Hate, an organisation that includes the now-jailed Umar Khalid, for legal help.

Lovepreet faces two FIRs – one in Delhi and another in Samana, Punjab. Both FIRs include charges under anti-terror clauses.

The Singh family met Lovepreet once, five months after his incarceration, when he was produced in a court in Samana.

“He was weak and he had trouble walking, I think there was an injury on his leg. I suspect the police beat him but I didn’t ask and he didn’t tell. He told me how the police picked him up, put him in a vehicle and took his phone. He broke down. I wanted to cry too, but I controlled myself,” said Satnam.

Punjab — and the Khalistan bogey

Lovepreet’s case is not an isolated one. Punjab has increasingly invoked the UAPA against young Sikhs, both Jatt and Dalit, on tenuous charges of harbouring dreams of Khalistan, a separate homeland for Sikhs.

India has used the anti-terror law against political opponents in high-profile cases such as the anti-Citizenship (Amendment) Act protests and the Elgar Parishad event. In the latter case, an American digital forensics firm has found that key evidence was planted. Equally important is the use of the UAPA against minorities, Dalits and Adivasis. Use of the law picked up steam in 2020, said lawyers from 12 states at a three-day conference in January organised by the People’s Union for Civil Liberties (PUCL).

That’s because an amendment in 2019 allowed the government to designate an individual – as against an organisation – a ‘terrorist’ under the law, even before a trial.

The law is worse than the Terrorist and Disruptive Activities (Prevention) Act and Prevention of Terrorism Act, its predecessors. Lawyers said the UAPA lets secret witnesses testify against an accused, without the accused ever finding out who they are. It allows the police to jail people for six months without formally charging them with a crime. Police allegedly don’t inform families after picking up people under the UAPA, and shift the arrested from one jail to another.

Rajvinder Singh Bains, an experienced lawyer from Punjab, points to two cases to show the absurdity in the police’s application of the UAPA: one where three young men are serving life sentences for possessing posters and literature on Khalistan, and sharing them on Facebook; and another where the National Investigation Agency rushed in with a fresh FIR despite an ongoing trial that had reached the stage of examination of witnesses for nine accused.

Bains has mounted challenges in both cases.

Another lawyer, Jaspal Singh Manjhpur, known in legal circles for collating data on use of the UAPA in Punjab, says there are patterns to applying this law in the state. Financial transactions from abroad – almost every family in Punjab has an NRI member – are commonly cited framing terror charges. Another strategy is the use of “stock witnesses” and secret informers or mukhbar by the police, he said.

Sikhs often send money home not just to their direct relatives, but also as contributions to community projects or medical expenses for someone else in the village. “Its like, ‘Here is my contribution of $100’ for this project, such as someone’s illness in the village,” said Manjhpur.

“For small amount, which has come from Western Union and not through the hawala route, the recipient can be put in jail.”

“The bare reading of the section shows that there was no show of criminal force there was any conspiracy to overawe by criminal force. Which was the conspiracy, when it was hatched, what was the plan and who were the people involved. All these questions remain unanswered,” said the court plea for their release.

Tamanna Pankaj, Lovepreet’s lawyer who is in touch with him through video conference, said the prisoner is cooking in jail also.

“He is working hard, feeding people. He earns Rs 6,000 a month. When I asked if he wants winter clothes such as a jacket, he said no, but could I send a few t-shirts? When I sent that to him, the next video conference he was actually wearing the new t-shirt and pointed that out to me. He is afraid to call home, he tells me repeatedly that he worries that if he does call, it will cause trouble for his family.”

Pankaj says she, as a lawyer, knows what Lovepreet did was wrong. Posts on Facebook, and participation in a WhatsApp group, though, should not lead to indefinite incarceration for someone who had barely reached adulthood.

The chargesheet (a formal listing of charges and evidence against an accused so that a defence can be mounted) says Lovepreet had arranged two guns for Khalistan sympathisers, a charge Lovepreet denies. A gun was recovered from Samana, and another from Patran, after Lovepreet’s interrogation, says the chargesheet.

Lovepreet has told his lawyer he was returning from Patiala with merely a wallet and cellphone, after completing the fitting of CCTV cameras as part of his job, when the Delhi Police swooped down and rounded him up.

Manjhpur points out that some accused face multiple anti-terror cases on the same charge and evidence. This is borne out by Lovepreet’s case. In Samana and Delhi, he faces the same charges.

On the morning of Thursday, February 11, 2021, Lovepreet got bail from the Delhi high court in the Delhi case, FIR no 154. He still faces terror charges in FIR no 144 in Samana; The Caravan, in a report less than two weeks ago, took apart that FIR and pointed out the holes in it. (The Lovepreet mentioned later in The Caravan article is different from the Lovepreet in FIR no 144. That Lovepreet died by suicide after questioning by the NIA.)

The Singh family hopes to see Lovepreet home one day. Sukhvinder and Satnam talk about how their sensitive brother – who dropped out of school after the sarpanch picked a physical fight with their father, where Lovepreet got slapped, after the latter’s public declaration that his family won’t vote for the former — doesn’t stand much of a chance against a brutal law applied indiscriminately.

The UAPA had a pendency rate of 78% (cases pending investigation versus total number of cases) in 2019, much higher than other laws (see chart). The law is keeping people in jail without bail or trial.

Lovepreet’s lawyer is hopeful. “I believe in restorative justice, not retributive,” said Pankaj.

Sukvinder is holding on to her fond memories of her brother. “He fed people even during COVID (the lockdown). He would buy food for others. After he got his salary, he would buy flour for families who he felt don’t have an earning member; he said they were hungry.”

Aparna Kalra is a Delhi School of Economics alumnus whose forte is investigations, profiles and data journalism. She has worked as a fact-checker on a Facebook project for AFP.