The Nihang sect follower who surrendered on Friday, claiming responsibility for the brutal killing, was sent on seven-day police remand by Sonepat court on Saturday. 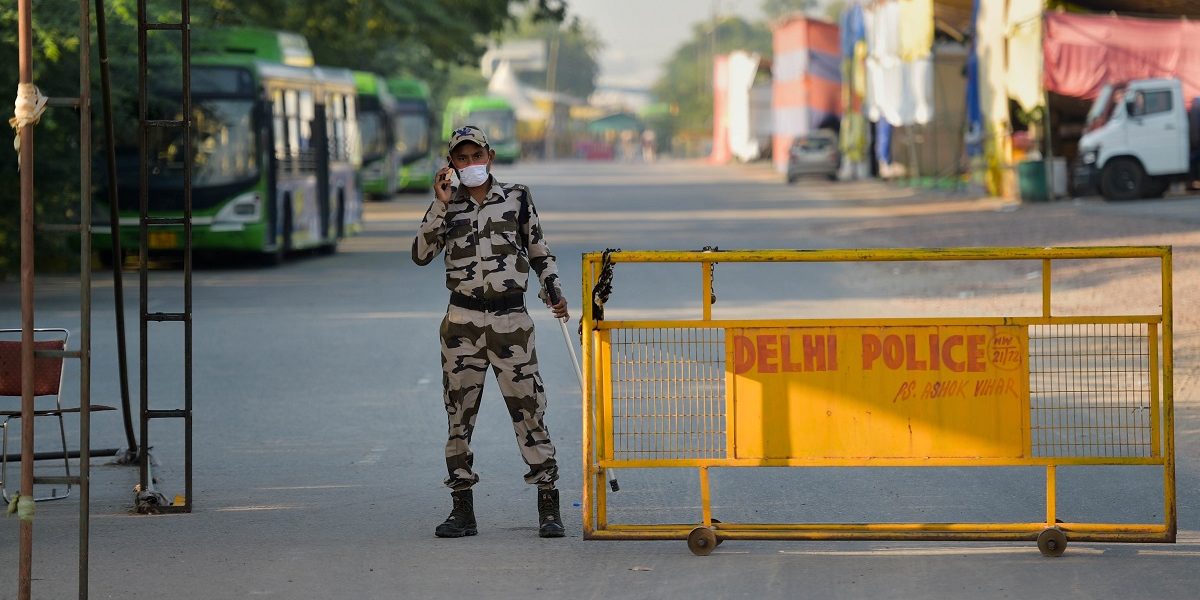 A security officer keeps vigil at the Singhu border near the site of the farmers' protest, in New Delhi, October 15, 2021. Photo: PTI/Ravi Choudhary

Chandigarh: Hours after the gruesome execution of a 35-year-old man near the main stage of the farmers’ protest at the Singhu border on Friday, leaders of the Nihang sect, a Sikh warrior community known for its extreme actions, publicly declared that they had killed the man because of his “attempt to steal” their holy scripture.

The revelation came just before one member of their community, Saravjeet Singh, surrendered before the Haryana police, claiming responsibility for the brutal mutilation and killing of Lakhbir Singh, a Dalit Sikh from Cheema Kalan village in Punjab’s Tarn Taran district.

The body of the victim was found half-naked, with his left wrist chopped. His ankle and leg were broken. The body was found early on Friday, hanging from a police barricade in a pool of blood near the main stage where the Samyukt Kisan Morcha (SKM) has been protesting at Singhu.

Initially, the Nihang Sikhs, who claimed to have caught him red handed with their Sikh scripture and executed him, refused to hand over the body to the police.

After parleys and conversations with a Nihang leader that lasted close to an hour, the police were allowed to take the body. They rushed to a local hospital at about 5 am, but was declared brought dead.

While the accused was sent for seven-day police remand by the Sonepat court on Saturday and a plea was filed in the Supreme Court, Baba Aman Singh, the leader of a Nihang group, appeared before the media late on Friday night and justified the gruesome murder as ‘punishment for blasphemy’.

He added that the group will not hesitate to repeat its actions if attempts are made in the future to “defame our gurus”.

He was also quick to warn the Union government not to give the incident a Khalistan colour. At the same time, he told farmers’ organisations to think twice before announcing their views on the incident, since the matter pertains to the sacrilege of their holy religious scripture and has nothing to do with the protest.

“They can say what they want. We are not governed by anyone,” he said, commenting on the statement released by the farmers’ unions condemning the killing,

Nihangs, who are always seen in blue robes and are usually armed with swords and spears with decorated turbans surmounted by steel quoits, constitute a small community in Punjab.

About a dozen bands, each headed by a jathedar (leader), are still carrying on with the traditional order. Prominent among these are the Budha Dal, the Taruna Dal and their factions.

They use the slogans ‘Chhardi kala’ (forever in high spirits) and ‘tiar bar tiar’ (state of ever preparedness for unforeseen events).

Nihangs were also in the news in Punjab last year, when during the COVID-19 lockdown, members of one group chopped off the hand of an assistant sub-inspector of the Punjab police in Patiala when he asked them to show their curfew pass.

Different Nihang groups have been camping at the Singhu border ever since the protest began last November to express solidarity with the farmers.

However, their presence has often raised eyebrows, even within the farmers’ organisations, which were worried about the presence of religious groups and that they may attempt to use the stage for their own propaganda.

These apprehensions came true with the lynching and the subsequent justification by the Nihangs, which may embolden those who are trying to scuttle the movement.

A farmer leader told The Wire, seeking anonymity, that those who oppose the farmers’ movement, including the BJP, are likely to be emboldened by the lynching. It may also cast a shadow on the Lakhimpur Kheri incident, where four farmers were recently mowed down, allegedly by Union minister Ajay Mishra’s son.

Therefore, it was not surprising when after the lynching, the BJP’s Amit Malviya through a tweet took a dig at farmer leader Rakesh Tikait and activist Yogendra Yadav, saying, “Had Rakesh Tikait not justified mob lynching in Lakhimpur, with Yogendra Yadav, sitting next to him, maintaining sanctimonious silence, the gory murder of a youth at (Singhu) border would not have happened. Anarchists behind these protests in the name of farmers need to be exposed.”

While the SKM, an umbrella organisation of the farmers’ unions spearheading the movement, condemned the incident, an editorial in the Indian Express said just condemnation is not enough. The farmers’ movement and its leadership needs to be constantly alert and vigilant to the dangers of becoming the staging ground for extremists in search of relevance, the editorial said.

However, senior journalist Hamir Singh said that one can’t paint the farmers’ movement in a bad light because of this incident. In big social movements, one cannot stop anyone from joining the protest. The SKM can only make its vision and stand clear, which has been the case since the beginning, he said.

“From day one, the SKM has maintained that their movement is non-religious. Even SKM leaders like Balbir Rajewal made frequent appeals to Sikh religious groups to stay away from the protest for the greater good of the movement. The statement issued by the SKM on Friday that the sacrilege of any religious text or symbol does not give anyone the right to take the law into their own clearly indicates their stand. I believe after the incident, there will be more clarity in their stand and they will be getting more support from the larger people,” Hamir Singh said. 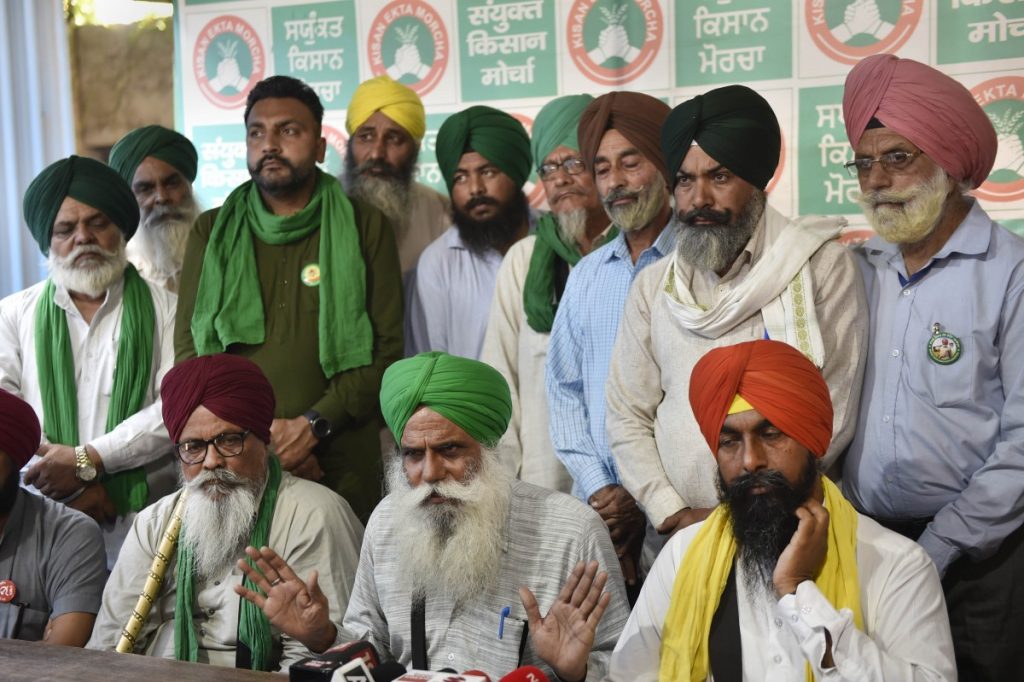 Why did Nihangs murder Lakhbir Singh?

Baba Aman Singh, the religious Nihang leader, said in another interview that it was “unfortunate” that the sacrilege incidents, which had started in Punjab in 2015, had reached the Singhu border as well.

About a kilometre away from the Singhu border is the Moyan di Mandi gurudwara. The Sarbloh Granth (a holy scripture composed of more than 6,500 poetic stanzas by the 10th Sikh Guru, Gobind Singh), was placed there, he said.

Aman Singh alleged that Lakhbir Singh arrived there a few days ago and won the trust of the people with his seva (service). However at around 3:30 am on Friday, he went into the gurudwara and stole the Sarbloh Granth. “But we got hold of him near the Singhu border and recovered the holy scripture from him later. We have video evidence to prove it,” he claimed.

He also levelled allegations of conspiracy, claiming that Lakhbir Singh had told them that he was paid to steal the scripture.

The Nihang leader did not express any remorse, instead saying that anyone who attempts to desecrate their faith would be treated similarly. “The administration or police is free to take any action, but we have made clear our intentions since it is a matter of faith for us,” he added.

Baba Aman Singh also said that Saravjeet Singh, the man who has surrendered for the killing, has been associated with the Nihang sect for a long time. He takes care of a horse stable at the sect’s headquarter in Chamkaur Sahib, he said.

Police in wait and watch mode

Sources said that the Haryana police are taking utmost precaution with the probe into the lynching case, given that it is a sensitive matter, involving a religious angle.

Police believed that the lynching may not be the work of only one person and more people may be involved in the crime.

“More clarity will come during the interrogation of the accused, who surrendered to the police on Friday and was accordingly sent to police remand,” said an official.

Meanwhile, deputy superintendent of police Virender Singh told The Wire that police got seven-day remand of the accused.

“He will be interrogated for the next few days. Let us see what details come out. We will accordingly proceed with the probe,” he said