Anchored in the Barren: The Case of Pune’s Janata Vasahat

The slum dwellers of Janata Vasahat, Pune's largest slum at the foothills of Parvati Hill, have since 1974 undergone a tumultuous journey in retaining their homeland against state-led attempts to rehabilitate them. 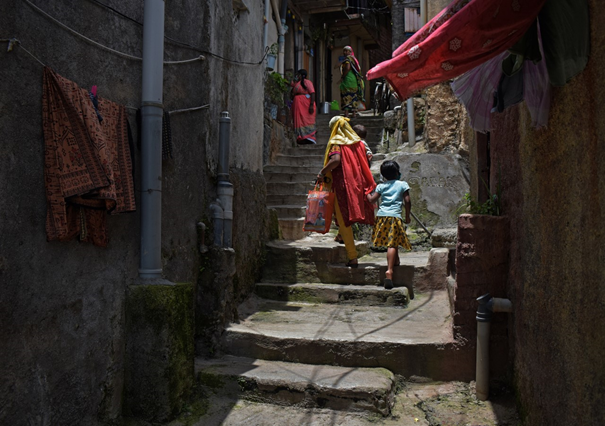 Escaping the claws of the great droughts of 1970s, many low income migrating families from different parts of Maharashtra, Bihar, Uttar Pradesh, Jharkhand, Andhra Pradesh arrived in scores near a small tekri (hill) of Parvati Hill in Pune, in search of refuge and a livelihood opportunity.

The migrating families occupied this barren land located above the Mutha Nadi Bank Canal, laying the foundation of a settlement, popularly known today as Janta Vasahat — a location that comprises multiple slums with a total population of around 60,000. The residents comprising young daily-wage workers, small-scale businessmen, and even a few IT and tech workers.

In what would be legally viewed as an act of encroachment by incoming migrants, the land of Janata Vasahat above the canal, attracted many local landowners to develop the area for low-income affordable living, building kachcha makaan, some flats and residential spaces for rental profit. Under the local municipal corporation-led development programme, the entire region of Janata Vasahat was reserved for a ‘green park’, due to which any major construction was prohibited. Nevertheless, the key landowners of the land, members of the Raut family, began to rent out small portions of their land, attracting more migrants and low-income locals to take possession. 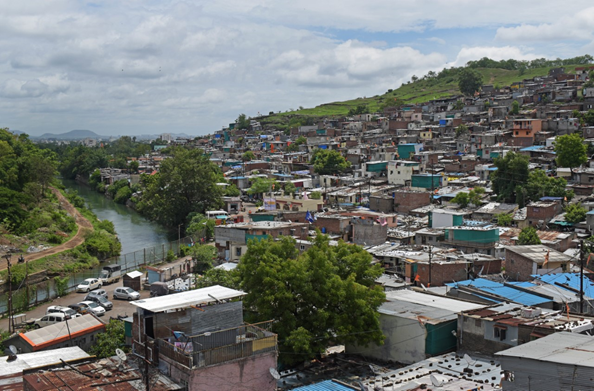 Janata Vasahat, Pune’s largest slum at the foothills of Parvati Hill, was considered to be an unauthorised settlement and even now remains legally viewed as a disputed space. Members from our Visual Storyboard team, from the Centre for New Economics Studies (CNES) at the OP Jindal Global University, spent a couple of months interacting with locals, state officials and activists working in the area of Janata Vasahat.

Attempts were made by the municipal corporation to demolish the settlement in 1974. However, this process was stalled by subsequent acts of local political intervention, after which it was eventually notified as a slum. Since then, in years between 1974 and 2021, the slum dwellers of Parvati Hill have undergone a tumultuous journey in retaining their homeland and the residing community against various state-led attempts to ‘rehabilitate the slum’. We discuss some of these below. 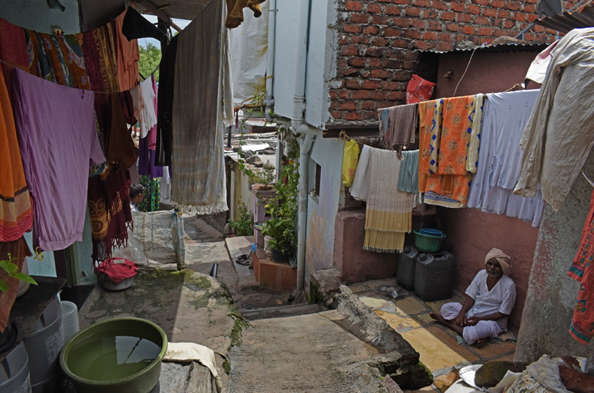 Over time, the settlement of Janata Vasahat has evolved into a space that provides access to water and electricity to all its residing population. Photo: Jignesh Mistry

The rehabilitation attempt of 1980s began with the land acquisition project that sought to provide slum dwellers with HUDCO (Housing and Urban Development Corporation) housing loans and new accommodation in exchange for their rehabilitations. Close to 50% of residents refused to participate in the scheme. The remaining half faced many challenges due to structural flaws in the implementation of the programme. Protests and lawsuits followed over the terrible execution of the scheme that made the slum rehabilitation attempt unsuccessful.

In 1987, the head of Pune Municipal Corporation’s slum removal department, Kinkar, proposed to buy surplus land at the rate of Re 1/square feet and allocate that land to Janta Vasahat residents so that the entire population from the slum could be shifted from there. Every family was given a plot of land to move out and evacuate the land at Parvati Hill where eventually a park could be built.

Trouble brewed when instead of handing over their property to the government, residents called in their relatives to settle in their houses in Janata Vasahat. With distant families now living in their homes, the old residents moved to these newly acquired land given by the government. Hence, another rehabilitation attempt failed.

The failures of such schemes have led to a strong call for re-evaluating the terms of initiating rehabilitation. It is important to acknowledge and understand how Janata Vasahat (and many settlements like these) are not just ‘slums’, or exclusionary settlements lying outside the ‘planned model of urban development’. It is a representative composition of a tightly knit community of migrants who have created a spatial identity for themselves within the urban landscape of Pune.

Not only is this residential-social network a solace – and a land of opportunity – for all migrant workers who come from all across Maharashtra and other states to Pune, but their livelihoods are deeply entrenched to the habitat itself. Most of our respondents (including more women) said how they opened up shops and other small-scale retail businesses inside this big settlement and make their ends meet from what they make from these businesses.

Many families migrated to Janata Vasahat from their villages to make a better living for themselves and Vasahat became that place where they had an opportunity to lead a relatively more comfortable life with access to housing, water, electricity, public transport etc. No rehabilitation project or development has been able to provide them with these ‘public’ goods in all these decades because of which many residents of Janata Vasahat refuse to move, when any step to displace them takes place. 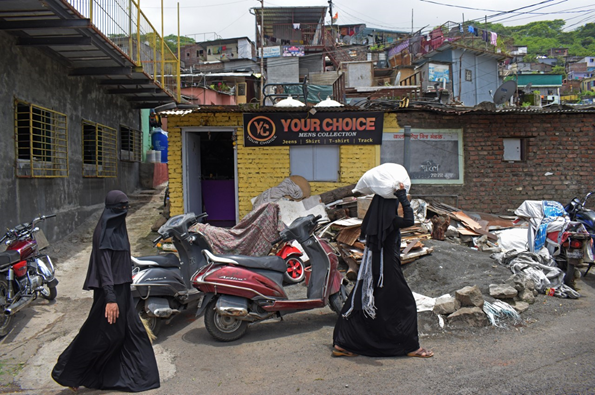 Many residents own shops in the area that support their livelihoods. Photo: Jignesh Mistry

Rafiq Maniyar*, a bangle seller living in Janata Vasahat, says, “We have access to water, electricity, the bus station is very close from here, the train station is nearby…we have access to all these facilities, so why will anybody settle anywhere else? Builders keep trying to take us out but even according to the law they need 70% of the people in Janata Vasahat to agree to their proposal of rehabilitation, so any such measure always falls apart.”

Also read: When It Comes to Urban Planning, India Suffers From a Poverty of Imagination

From a broader context

The urbanisation process in developing urban economies has undoubtedly been accompanied by significant rural-to-urban migration. Trends of these migratory waves have of course changed across decades. The early 1960s and 1970s (as seen in Janata Vasahat) witnessed an exodus of low-income rural families relocating to nearby urban areas due to natural disasters or simply due to a lack of better employment opportunities.

This migration increased urban population levels and promoted urban growth by providing industries with cheap labour for work in construction and real estate. However, the spatial impact of such migration changed the modern topological complex for good, as many metropolitan areas contain massive slum pockets in the form of low-income settlements.

Amid rising population levels, the demand for affordable housing, especially in cities, has remained unmet. Low-income families often resort to living in squatter settlements and slums. With time, such temporary settlements have transformed into labyrinths of semi-pucca houses and jhuggis. Amid tall skyscrapers and four-lane roads in the urban utopia, the presence of slums is paradoxical, to say the least. As a result, the migrants and their large settlements that were once integral to the urbanisation process are now perceived as roadblocks that prevent urban planning.

At the same time, the Indian government’s concern with slums is a complex, multi-layered issue. Most slums, according to state authorities, including those in Pune, represent the ‘wasted potential of urban land’ — as settlements occupy large areas that can be used for other purposes during urban planning. As officials told us, this space can be used for expanding public road networks, constructing public offices and buildings etc. Most officials acknowledged how in the absence of ‘good affordable housing development schemes’, illegal possession of land and encroachments have become major issues in cities like Pune.

On top of this, there is also the much cited ‘aesthetical motivation’ to remove slums from metropolitan areas. In accordance with the projected standards of modern civilisation and modernist aesthetics — of straight lines, open spaces and visible order — urban planners consider slums as aberrations in the current urban landscape. Hence, quite often governments and local agencies – as seen in Vasahat too – direct their efforts towards re-constructing these areas and imposing new local orders via slum rehabilitation programs, without the consent and consensus of local residents (or their participation). In the past, many such schemes have been curated to allow slum-dwellers to voluntarily rehabilitate themselves in the government-provided, planned housing spaces.

However, the efficiency, ethics and legalities of these programmes – in context to the rights of people – have often been brought into question. The case of Janata Vasahat highlights these conflicts between interests and rights.

Spatial conflict of interest and rights

Even though Janata Vasahat has now evolved into a more developed low-income settlement whose residents do not wish to rehabilitate, the concern of illegal occupation of land remains unresolved. In such a case, how does the law – by its own nature – protect the rights and livelihood of the urban poor?

Needless to say, those residing in Janata Vasahat do possess certain legal rights which cannot be denied by authorities. At the very basic level, it is a settled position of law that the right to housing and shelter is an integral component of the Right to Life guaranteed under Article 21 of the Constitution of India. This means that slum dwellers ought to receive a hearing and the right to notice prior to evictions.

Furthermore, residents do possess the right to be rehabilitated in a similar or adequate manner. Effective resettlement has thus been stressed upon by the courts time and again.

Besides shelter, there is also long-standing jurisprudence regarding the right to livelihood. In Olga Tellis v. Union of India, the Supreme Court held that the right to livelihood is an important facet of the right to life which cannot be denied by evicting people except according to the procedure established by law. Therefore, residents of slums – like Janata Vasahat – are protected against arbitrary and unconstitutional actions of authorities that occurred during the rehabilitation project of 1984.

The issue, however, is the lack of awareness amongst communities about these ‘rights’ and to claim them through a legal process. There are hardly any legal activists or legal aid centres accessible for such population – not just in Vasahat, but in most slums across the city – which could help local, low-income migrant groups against ‘interest groups’ like big capital builders, working in nexus with municipal corporations. 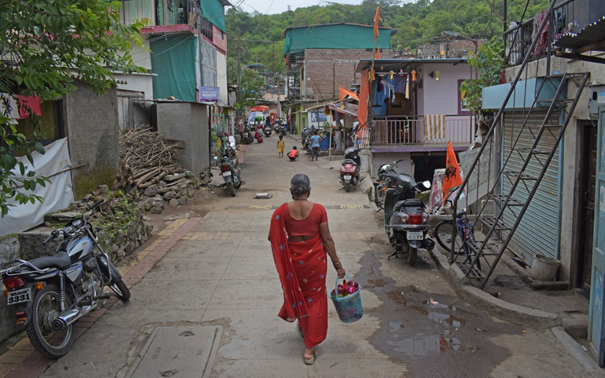 Rehabilitation attempts of the past have come at the cost of livelihoods and well-being of the communities being displaced. Those living in Janata Vasahat may consider themselves lucky. Going forward, as the ‘state’ and ‘residents’ battle, considering more inclusive, and deliberative, consensus -led plans for urban re-development and upgradation might be the prudent choices rather than a complete rehabilitation.

In the spirit of community living, it is important to re-evaluate slum rehabilitation programmes to ensure that the programme is benefitting those who need it most — the silenced, often ‘voiceless’ urban-poor.

There is now a provision for this under the ‘Pradhan Mantri Awas Yojana (Urban) — Housing for All’ mission, as part of the “In-Situ” Slum Redevelopment Program (ISSR) which aims at unleashing the locked potential of the lands currently under slums while bringing slum dwellers into the formal urban settlement.

While this policy might seem more promising, it is imperative that the residents are provided with the needed legal, economic, social and even psychological support to come to terms with such policy programmes. Housing policies need to be fair, just, reasonable, and according to the principles of natural justice. The reality, unfortunately, seems far from this.

*Note: Name of the respondent has been changed to protect his identity.

This study was undertaken as part of a Centre for New Economics Studies (CNES) Visual Storyboard initiative. Please check all video essays and photo essays on this storyboard to know more about the team’s work and its visual archive. Authors would like to especially thank professor Aneeta Gokhale Benninger, executive director, Centre for Development Studies and Activities (CDSA), Pune and the research team at MASHAL, an NGO in Pune, for all their kind support and assistance provided during the project’s fieldwork.