'Free Them All!': A Call For Solidarity With Political Prisoners in India, US and Beyond

Speakers at a seminar in Boston, US, highlighted the cause of political prisoners, and how political dissent is being met with repression the world over.

Padma. B and Beena Sarwar

(I do not fear the place of execution
I embody the spirit of Mansur, let the executioner know
Why then would I be scared of your prison walls,
The voice of oppression, the darkness of ignorance?
I refuse to accept, I refuse to acknowledge this)

Revolutionary poet Habib Jalib’s iconic poem ‘Main Nahi Manta’ (I refuse to accept) written in 1962 in protest against the then military dictatorship in Pakistan resonates wherever political dissent is met with oppression and imprisonment.

While ‘fascism’ is not a word to be taken lightly, it is difficult to avoid given how political dissent is being crushed in various countries. This came through in presentations at a recent seminar in the Boston area about political repression and incarceration in India and the United States. The observations shared by three speakers ring true beyond borders.

“We are now a fascist country. It couldn’t be clearer from what we are witnessing today,” said featured speaker Kavita Srivastava, national secretary, People’s Union of Civil Liberties (PUCL), India. She was addressing participants at the Democracy Centre in Cambridge, Massachusetts, from her base in Jaipur Saturday, August 6.

In the ‘new normal’ created by the COVID-19 pandemic, the discussion on “Political incarceration and resistance in India and the United States of America” took place on multiple platforms. The Boston South Asian Coalition that connects diasporic South Asians in the area worked with the Boston branch of the Jericho Movement which works for political prisoners in the US for the hybrid event (online and offline modes combined).

Two speakers from India – Kavita Srivastava and Prachi Teltumbde – joined via Zoom call, while the discussion was streamed live on Facebook.

In the session on the rights of the incarcerated in Southasia by Southasia Peace Action Network (Sapan), Srivastava began with the case of one of India’s foremost human rights activists, Teesta Setalvad.

Srivastava dwelled on the decades-long struggle of Setalvad seeking justice for the victims and survivors of the 2002 Gujarat massacre of Muslims in India. Since her arrest on June 25 in Mumbai, human rights organisations have been urging the government to drop the charges against her, Srivastava added.

“Why term the events of 2002 in Gujarat a ‘massacre?’ If a ‘riot’ continues for three days, the state’s complicity is clear,” said Srivastava, adding “as any such actions can be contained within 48 hours.”

The Supreme Court of India on June 24 dismissed the petition by Zakia Jafri, which Teesta Setelvad had supported, that called for an investigation into a “larger conspiracy” behind the killings and destruction of property in Gujarat in 2002, Srivastava recalled.

Heading the three-member bench that rejected Zakia Jafri’s petition, Justice A. M. Khanwilkar alleged that Teesta Setalvad had conspired against the then chief minister Narendra Modi, now prime minister, and that she was using Zakia Jafri “as a tool,” Srivastava recalled.

Jafri’s husband, former parliamentarian Ehsan Jafri, was lynched by a mob outside their house in Gujarat in 2002.

She cited another recent example of a Supreme Court judgment dismissing the petition by Gandhian activist Himanshu Kumar for an independent investigation into the alleged extrajudicial killings of 17 Adivasis or indigenous persons in Chhattisgarh in 2009. The court additionally imposed a fine of Rs 5,00,000 on Kumar.

“This judgment is dangerous,” said Srivastava, “because citizens approaching courts to seek justice for those killed by security forces now risk being accused of being a threat to national security. They risk being framed and falsely accused of being part of a conspiracy against the Indian state, as evident in the cases of Teesta Setalvad and Himanshu Kumar.”

Srivastava also drew the attention of participants to the violence unleashed in January 2018 in Bhima Koregaon, Maharashtra, against Dalits. Those responsible for violence remain scot-free, she said.

She lamented that instead, those defending the rights of Dalits, like public intellectual Dr Anand Teltumbde; people’s lawyers Surendra Gadling and Sudha Bharadwaj; and cultural activists like Sagar Gorkhe, Ramesh Gaichor and Jyoti Jagtap of Kabir Kala Manch, are being imprisoned.

She said incarcerated activists known as the Bhima Koregaon 16  (BK16) – BK 15 after the death of Father Stan Swamy in custody – are India’s best thinkers and public intellectuals. While working with and defending people’s rights through various platforms they also held the state accountable to the people.

The state’s complicity in Father Stan Swamy’s death is evident in its denial of timely medical treatment to him after he contracted COVID-19 in prison. They even refused minor requests like providing a drinking straw which he needed due to his Parkinson’s disease, she said.

The BK15 remain incarcerated under the draconian Unlawful Activities Prevention Act (UAPA) which denies them bail, leading to lengthy periods of imprisonment. The Boston-based Arsenal Consulting firm’s investigations clearly showed that malware was used to plant evidence on the computers of activists like Rona Wilson and Surendra Gadling. Yet their cases do not come up for hearing before the high court, she added.

“In this situation,” she said, solidarity from the global community is crucial to support human rights activists and organisations in India.”

Speaking on the occasion Prachi Teltumbde, daughter of public intellectual Anand Teltumbde, one of the arrested BK16 activists, said, “My father has spent his third birthday in prison. I’ve seen him age over 10 years in that time.”

Prachi’s mother Rama Teltumbde (66) travels six hours by road every week to visit Teltumbde, then stand in a long line along with other inmates’ families to be able to talk to their loved ones for only 10 minutes, unable to even touch them. 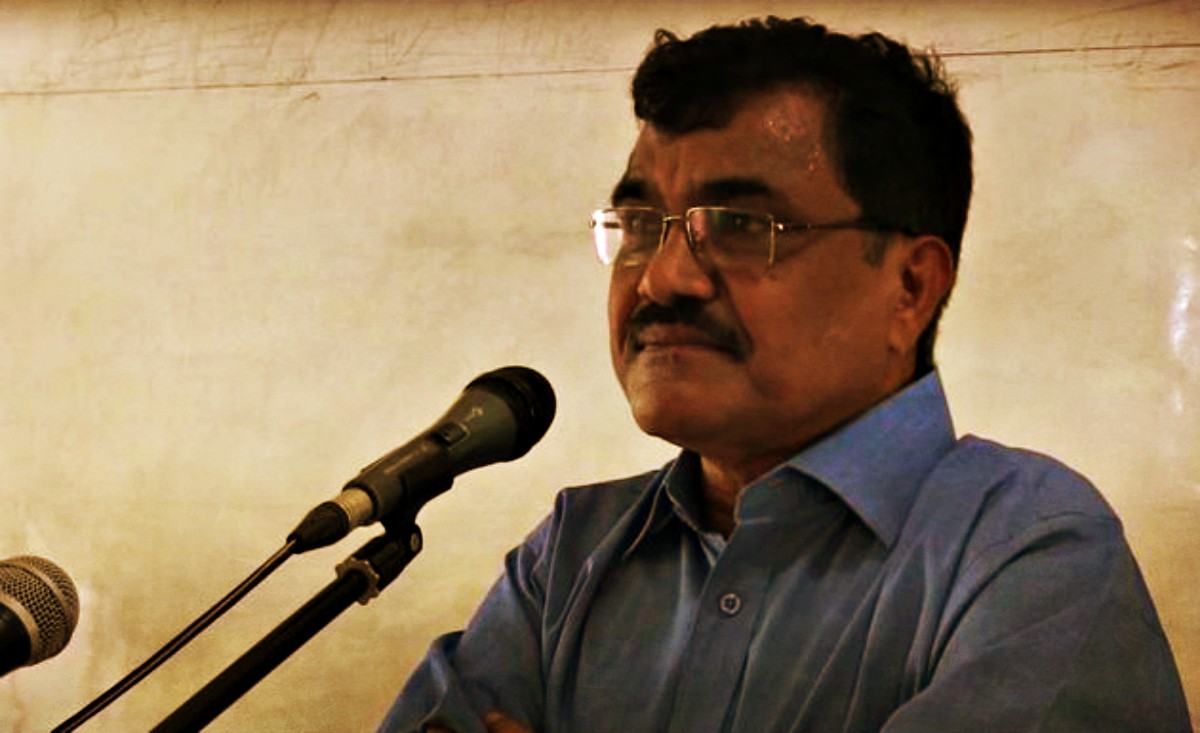 Prachi Teltumbde highlighted the impact of incarceration on the mental well-being of the prisoners and their family members: “I am living it and witnessing it at close quarters.”

“The absurdity of the fabricated charges against the BK16 is almost funny until you realise that these people have lost precious moments of their lives,” said Prachi Teltumbde, and even a life (Father Stan Swamy) due to sheer negligence. “The incarcerated activists are not even allowed to communicate with their loved ones on the phone. This is particularly hard for those like Gautam Navlakha, 70, whose partner finds it hard to make the weekly trip to see him.”

“The process was meant to be the punishment,” said Prachi Teltumbde.

In the US, one of the country’s best-known political prisoners Mumia Abu-Jamal has spent the last 40 years in prison, nearly 30 of them on death row. A former member of the Black Panther Party, Abu-Jamal worked as a writer and radio journalist, and served as president of the Philadelphia Association of Black Journalists from 1978-80. He supplemented his income by driving a taxi cab at night.

Going just by his initials, JD of Jericho shared details of the case in his presentation on “Mumia Abu-Jamal’s monumental struggle against corruption and empire”.

On December 9, 1981, Abu-Jamal saw a police officer stop his younger brother at a Philadelphia street corner. What happened next is disputable and led to his incarceration. There was an exchange of gunfire. The policeman died. Abu-Jamal was shot in the stomach and beaten by police at the scene.

“Mumia with his microphone was more dangerous than he would be with a gun,” said JD, a high school teacher by profession.  The photographic and ballistic evidence has questioned the state’s case against Abu-Jamal, marred by racism and anti-radical bias.

His death sentence was finally overturned in December 2011 after decades of agitations and appeals across the globe. He remains sentenced to life in prison without parole. Various international human rights and civil rights organisations including elected heads of state like the late Nelson Mandela have supported his demand for a fresh trial.

“What’s the call?” chanted JD, leading the slogan. “Free them all!”

To the audience question of how ordinary people can help those incarcerated unjustly, the speakers agreed that writing to them gives moral support and reminds the state that we are still watching.

“Letters bring a lot of hope,” said Kavita Srivastava. Prachi Teltumbde and JD shared addresses where letters and postcards can be mailed to Anand Teltumbde and Mumia Abu-Jamal.

The patterns of oppression outlined by speakers from India and the US show how governments systematically target and incarcerate citizens who challenge unjust laws and societal injustice. The most oppressed communities bear the brunt.

Saturday’s seminar was a small step toward showing solidarity with political prisoners across international borders and to wage united struggles for their release.

Padma B. is a member of BSAC, a coalition partner of the Southasia Peace Action Network or Sapan. Beena Sarwar is a journalist and founder-curator of Sapan.

This is a Sapan syndicated feature.