The Police Did Not Bungle in Assam, They Committed a Horrific Crime

From serious violations of procedures to state arrogance, a former senior police officer explains what was so palpably wrong about the Assam police’s approach in this case. 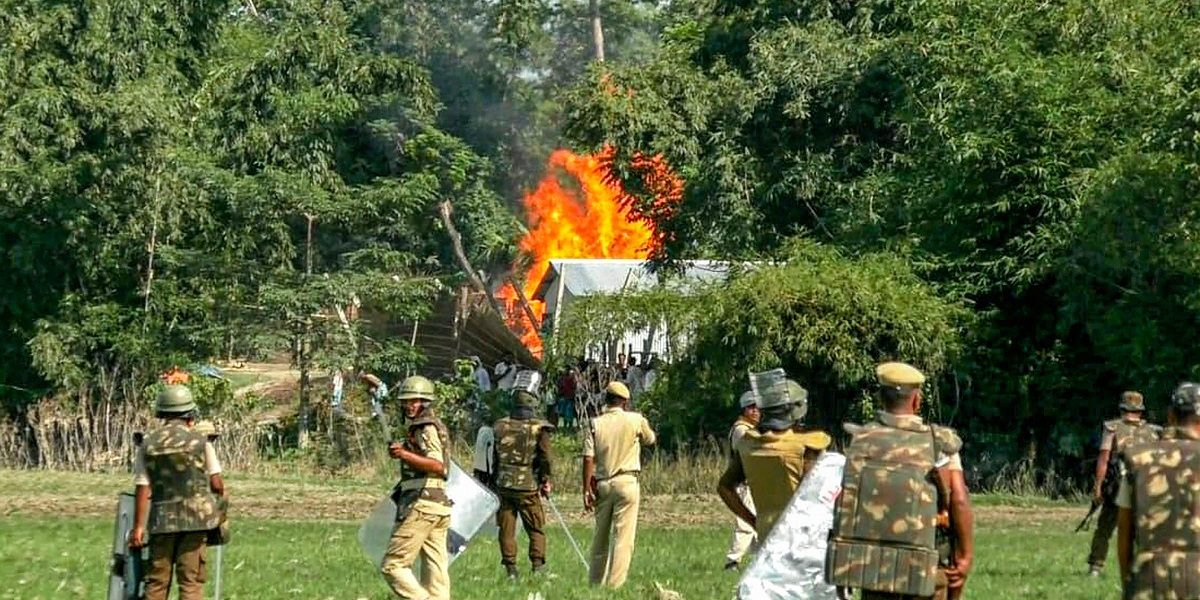 The horrific video of the police firing in Dholpur, Sipajhar, Assam has left the nation stunned in disbelief. The absolutely wanton manner in which the police personnel were seen firing at chest height at civilians as if they were doing some target practice was absolutely unprecedented in the history of the country and could probably put even the Jallianwala Bagh firing to shame.

A judicial probe into the matter by a retired judge of the high court has been announced for “inquiry into the circumstances leading to the death of two civilians and injury to several others, including police personnel in the firing incident”.

The report of the judicial probe would take time and it would still be open to the government to accept the report, reject it or simply sleep over it. As a former senior police officer, however, I feel readers need to understand – from a purely professional angle – what was so palpably wrong about the Assam police’s approach to the issue of mob control in this case.

For the sake of argument, without getting into any debate about the history and politics of the matter, let us presume for a moment that the people were indeed illegal encroachers and the state government had the authority to evict them and that they were protesting against it. But even if the government had the legal right to evict them, what gave them the right to kill people in the process?

Governments in this country have routinely been treating every protest by the public as a purely police problem, which can be addressed only by the use of force.

Driven by this ‘arrogance of legal power’, as Sangeeta Barooah Pisharoty has reported for The Wire, the administration started razing the houses of the ‘encroachers’ without allotting those being evicted a site where they could relocate to. We are given to understand that had a relocation site been allotted, the residents were prepared to dismantle their houses on their own as then they could re-use the tin-sheds and other materials to rebuild their dwellings at the relocated site. A heartless, arrogant state denied them this opportunity too.

As it has happened innumerable times, in this case too, the police and the government have invoked the plea of self-defence. In the video of the firing, the man shot dead is seen running at the police with a stick. How can the police shoot him down? Is a lone man with a stick so dangerous that he cannot be controlled by police batons and the only way is to shoot?

Only three conclusions are possible: police batons are useless; policemen do not know how to wield them properly; or, they are happy killing people because they believe they can get away with that.

If, in the opinion of the police, their polycarbonate batons are useless before wooden or bamboo sticks, why has the Bureau of Police Research and Development – that pretends to modernise the police – not abandoned them and found an alternative in so many decades?

If they cannot wield their batons properly, it is a direct consequence of poor training for which again the BPR&D and senior officers are responsible. If the police believe they could get away with murder, it would mean that all our pretensions of democracy are farcical.

Not having sufficient intellectual capacity to concoct credible lies, the senior police leadership did not realise that if the protesters indeed had sharp-edged weapons, they would have necessarily to come within grappling distance to strike with them and thus pose a reasonable threat to life. You cannot shoot a man with an agricultural implement like a sickle or dao merely because he was claimed to have been seen with a dao, can you? If the absurd logic were to be accepted, the police will have to shoot down almost every single farmer in the country.

Moreover, since cops across the country are known to prevail over government doctors and force them to manipulate medico-legal certificates to fit their stories, the judicial commission must get the injuries of the cops examined by an independent panel of experts in forensic medicine to ascertain whether the injuries are really consistent with sharp-edged weapons.

If it is still found that they do have injuries from sharp-edged weapons, the question would be how they could allow the protesters to come within striking distance in the first place. Almost as a matter of rule, protesters must be engaged at sufficient distance and that is why there is a system of giving warnings through portable loudspeakers. If the police did not have loudspeakers, in spite of there being a strong possibility of violence in view of the matter’s history, it is criminal negligence.

We are also told of tear gas having been used. This is laughable. They should have known that tear gas is ineffective in open space as it gets dispersed by wind and diluted very quickly. It works only in confined spaces like narrow lanes. There was no point of using it in open fields. Thus the argument of having used tear gas earlier is professionally untenable and appears more of an afterthought to cover-up the firing. 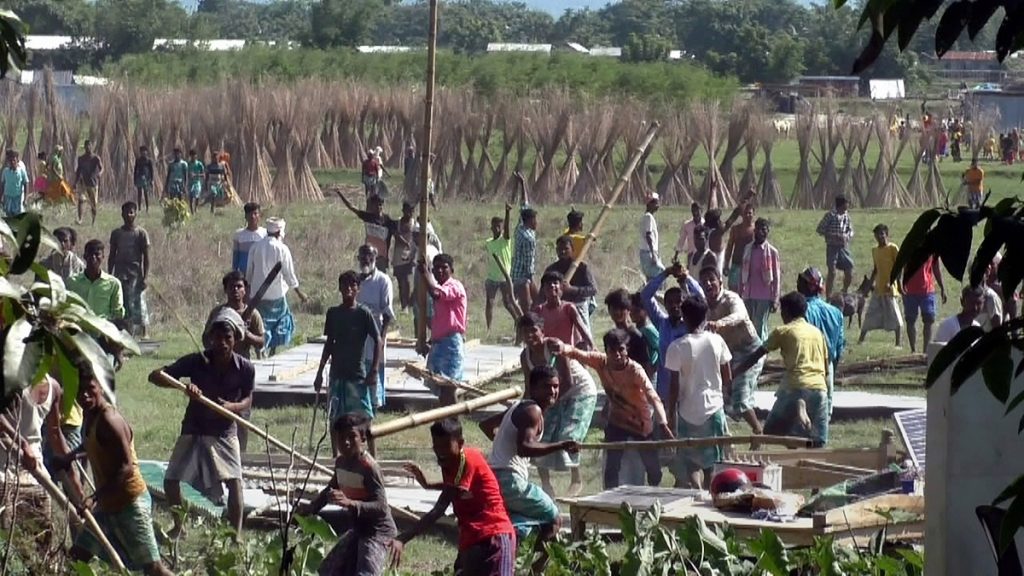 Villagers protest against an eviction drive in Darrang district of Assam, September 23, 2021. The drive was carried out to evict people from government land. Photo: PTI

If they apprehended a mob running into thousands, they should have prepared accordingly. Was their strength adequate or not? If yes, why were they obliged to fire so much? If not, responsibility must be fixed and punishment given to senior officers.

Firing in self-defence applies when they have not followed the prescribed procedure of dispersing an unlawful assembly vide Section 129 CrPC. It means that they were taken by surprise. How is it possible? Moreover, the plea of self-defence is rather weak as the ingredients essential for it would need to be proved in terms of the Supreme Court judgment in the case of Darshan Singh (2010). That appears difficult.

The plea of firing in self-defence also means that even for such a planned and anticipated action, the police had not taken a magistrate along with them. Why? That is a serious violation of procedures.

It is not that the mere presence of a magistrate is a panacea to all evils. In the infamous Nandigram firings of 2007, in which at least 14 farmers were killed, the people had been protesting against a project of the West Bengal government to acquire 10,000 acres of land for a Special Economic Zone. The state contended that the police opened fire following due procedure of obtaining orders from the executive magistrate. The Calcutta high court, however, ruled that, the magistrate’s order notwithstanding, the action of the police to open fire was wholly unconstitutional and could not be justified under any provision of the law as normal remedies are available to the state as also to the owners of the lands for redressal of the grievances with regard to the acquisition of land. “Such kind of force cannot be justified except in the cases of armed insurgency or warlike situation. Innocent farmers and villagers can hardly be put into the aforesaid bracket,” it said.

The high court was very clear that even under the provisions of the Criminal Procedure Code, the Police Act, 1861 and the West Bengal Police Regulation, 1943, indiscriminate, firing cannot be justified.

The court declared Regulation 155(b) of the West Bengal Police Regulation ultra vires of the Constitution of India because the mandate of the clause was to fire into the crowd and was thus violative of Articles 14 and 21. The court held, “It is difficult to perceive a situation where, in a crowd of thousands, an officer would be able to single out the targets and identify them for the firing party. The intention of this clause would, therefore, seem to be to crush the demonstration rather than to control or disperse an unlawful assembly. This clause, in our opinion, can be easily abused by the officer commanding the armed party. The possibility of numerous innocent persons being killed on the basis of wrong identification mistaken identity, negligence and sheer inaptitude cannot be ruled out.”

In the Assam case, this is apparently what played out.

In the Assam case, one has only to listen to the sounds of the repeated shots in the video that has been shared widely over social media. If that is not indiscriminate firing, what else could ever be?

You would not hear shots fired so rapidly even in the live videos of anti-terrorist operations (such as the videos from Umrabad, Srinagar and Poonch) where the security forces are being fired upon from the other side by AK-47 rifles – even there they fire sporadically and in a controlled manner.

Some people on social media have attributed the brutality to Islamophobia and hate enabled by the state as the targets were Muslim ‘immigrants’. At present, however, we do not have the exact and detailed sequence of events, which could be suggestive of the psychological reasons of the wanton firing by the policemen. In all fairness, therefore, we must reserve judgment on this aspect for now.

I am not discussing the disgusting behaviour of the photographer in trampling upon a dying or dead person because he was a private person and here we are concerned with the police.

Scientifically, it has been established that police officers all over the world are known to become more violent or even vindictive when they have to face people whom they personally do not like or hate for whatever reason. This is very common in the US.

Lynne Peeples has carried out an exhaustive study ‘What the Data Say about Police Shootings’ on this. The conclusion is categorical—people from minority ethnic groups in the US are shot at higher rates by population—a black man is 2.5 times more likely than a white man to be killed by the police during his lifetime.

From the video of the incident, it does not appear that the police had panicked. The firing seems to be deliberate. In any case, if they had panicked, it would reflect very poorly on their training and thus on the senior officers in the state.

The police personnel concerned must be proceeded against for murder. At the very least, prudence would call for disarming them until such time that they prove their composure under stress in elaborate psychological evaluations. Such ‘loose cannons’ cannot be allowed to become a threat to public life by carrying firearms and the authority to shoot.

N.C. Asthana is a retired IPS officer and a former DGP, Kerala. Amongst his 49 books, the latest is State Persecution of Minorities and Underprivileged in India. He tweets @NcAsthana.