In Photos: After Young Principal's Custodial Death, Grief and Anger in Kashmir

Rizwan Assad died in police custody in Srinagar, after he was detained by the Jammu and Kashmir police for questioning in a “militancy-related case”, triggering protests and clashes across Kashmir.

Rizwan’s brother showing the oranges they were eating together when their house was raided Sunday night to arrest him. This is the last memory of them alive and together. Credit: Waseem Dar 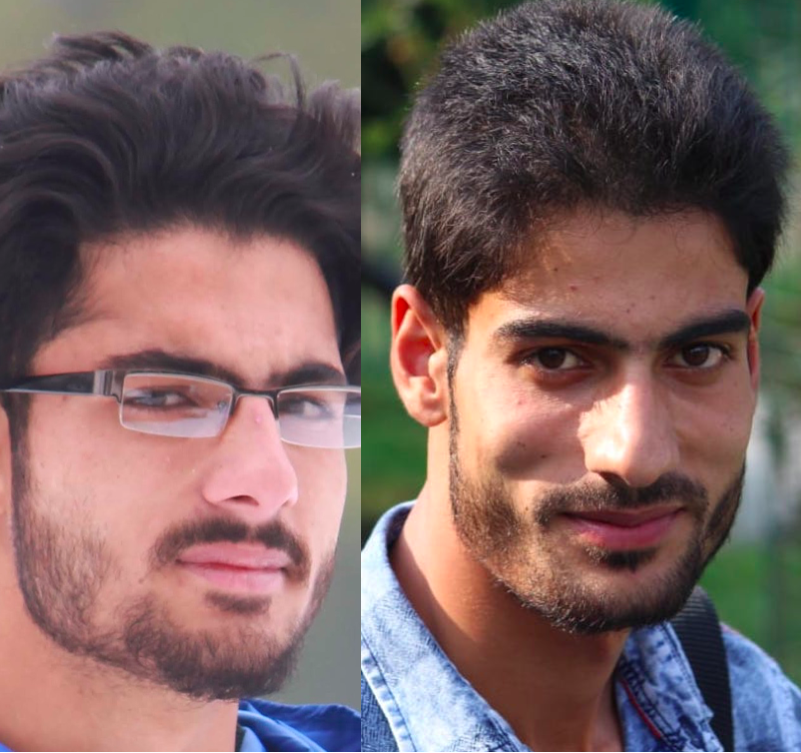 When authorities at the Islamic University of Science and Technology, Awantipora announced the sudden and unexplained postponement of exams on February 19, just a couple of hours before they were scheduled, many sensed trouble – something usual in Kashmir. The suspense melted away before by 11:30 am, when news broke that a 30-year-old private school principal and chemistry tutor, Rizwan Assad Pandit, had died in police custody.

What followed was the usual – a long wait for his body, protests, clashes, statements, condemnations, orders for an investigation, a huge, late-night funeral and an instant, refusing-to-fade social media furore talking about #Rizwan and seeking #JusticeForRizwan. 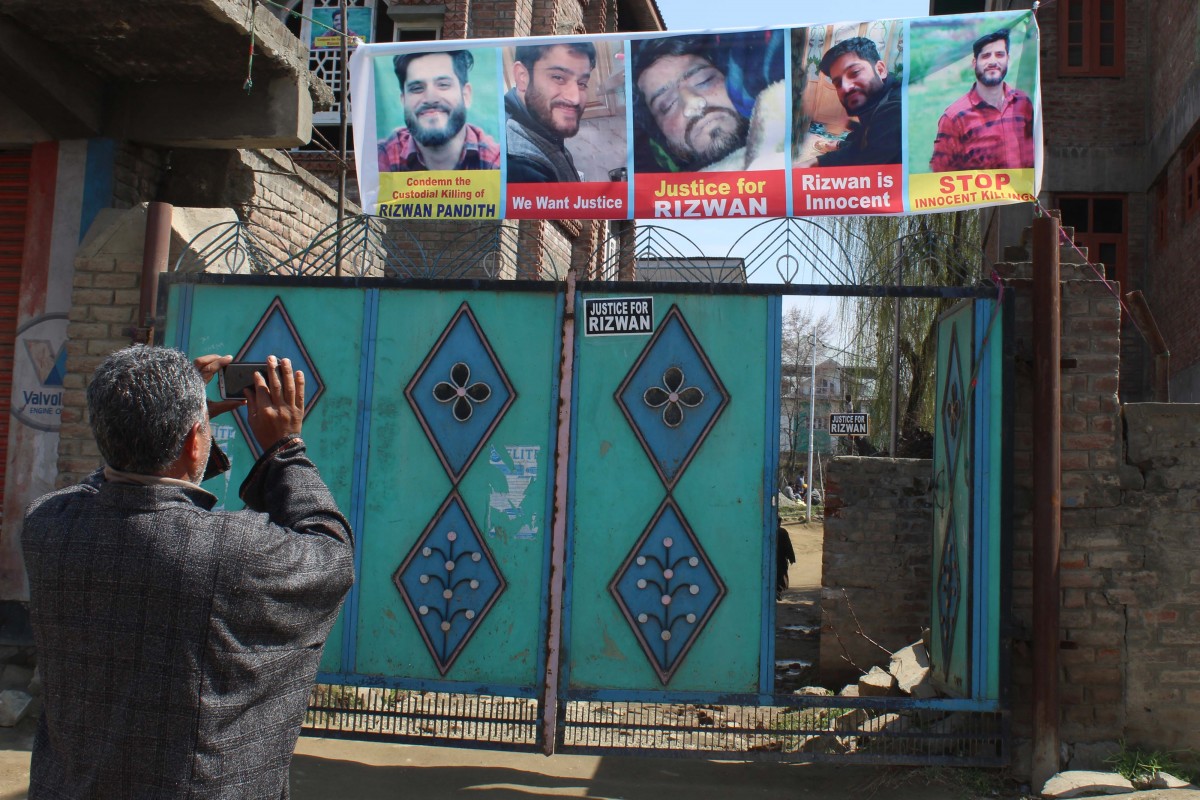 A visitor clicking pictures of the entrance to Rizwan’s home. The gate has a banner with Rizwan’s pictures, alive and dead, with messages seeking justice printed over. Credit: Waseem Dar 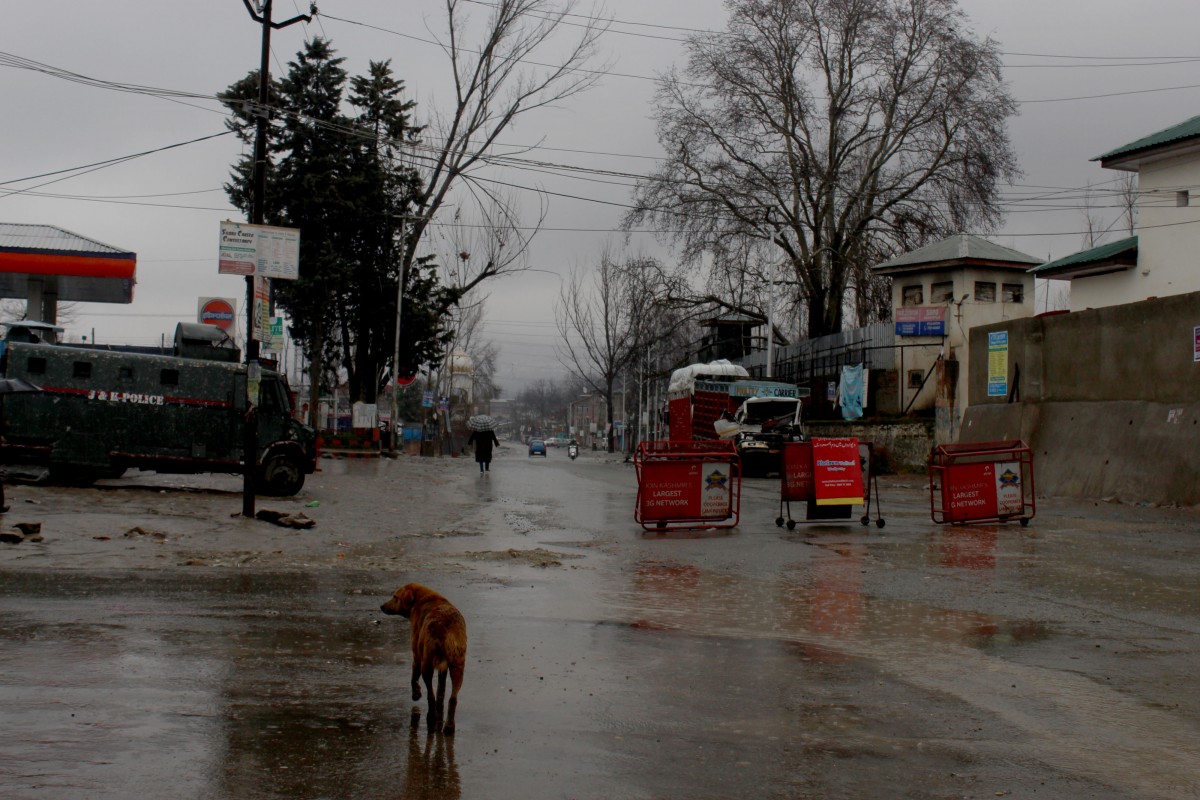 The deserted look of Awantipora market, outside the local police station, on Tuesday, amid shutdown and restrictions. Rizwan was taken by the same police station before being shifted to Cargo Camp from where his body was flown home. Credit: Waseem Dar 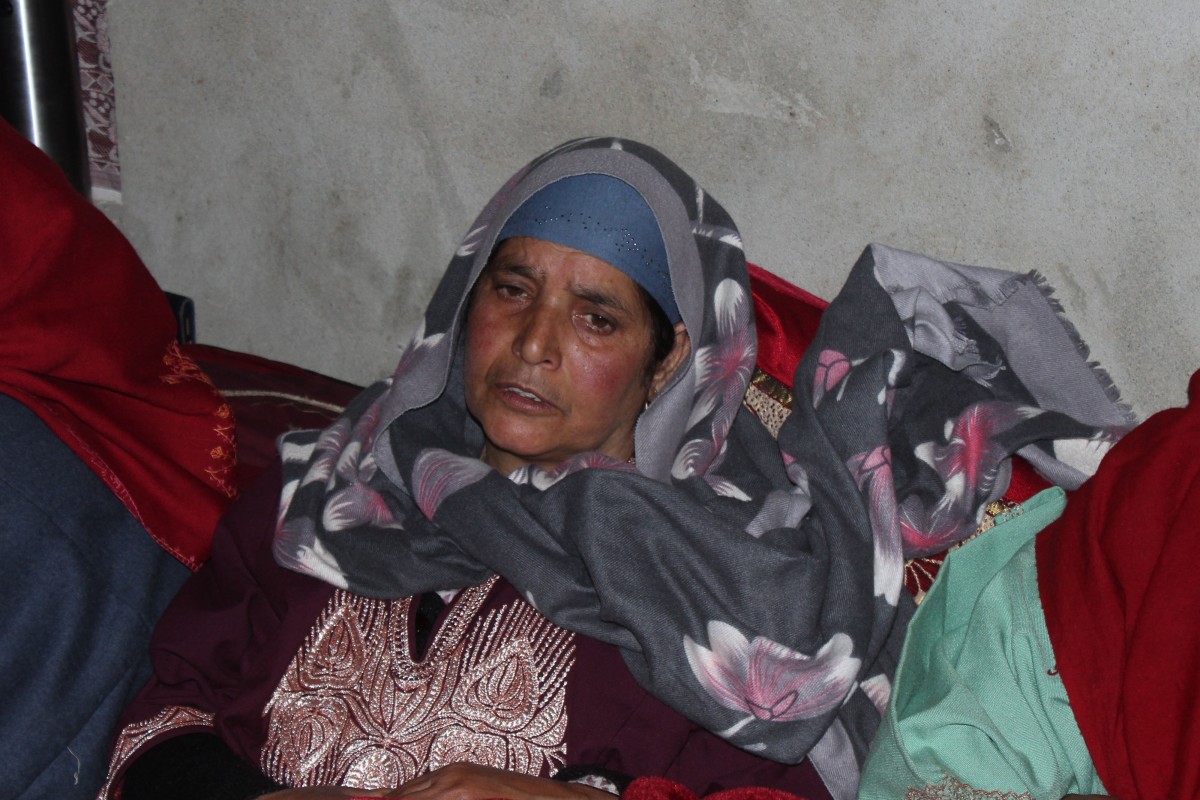 A distraught mother of Rizwan being consoled by the women visiting her from far and wide. She is in a shock as Rizwan was her youngest son. Credit: Waseem Dar

At Rizwan’s home, people can still be seen visiting his shattered family and his graveyard. While his parents and two sisters are still in shock, his elder brother, Mubashir, is putting up a brave face meeting visitors. Since Tuesday, he has been responding to queries from the media about Rizwan’s past and how his body looked like when it was brought home. 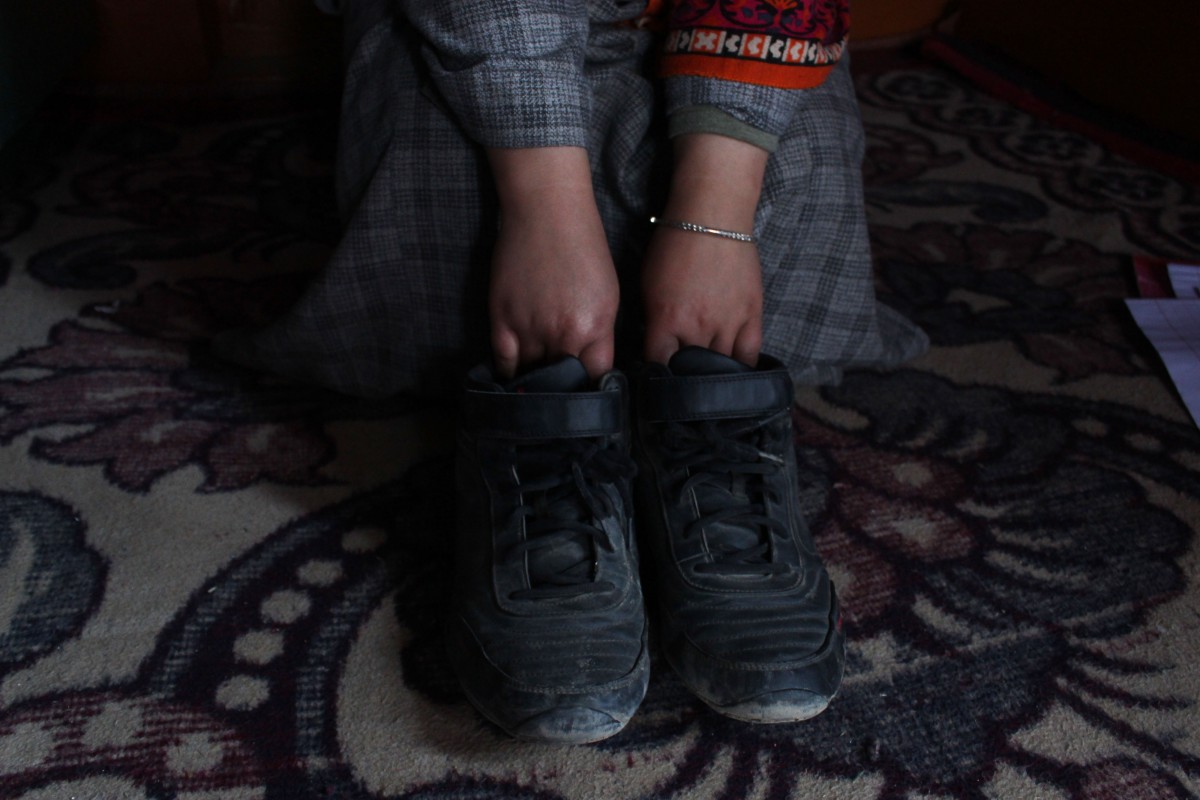 Rizwan’s younger sister showing his shoes which he routinely used at home. The family is preserving every belonging of his as a memory. Credit: Waseem Dar

“He was brutally tortured; his left eye had turned black and his head bore two stitches; the body showed clear burn and cut marks making it obvious that they had used a hot iron over his thighs and some cutting tool as well; the cuts were deep and his spine broken,” narrates Mubashir, while showing the only picture he took of his brother’s body on his phone. 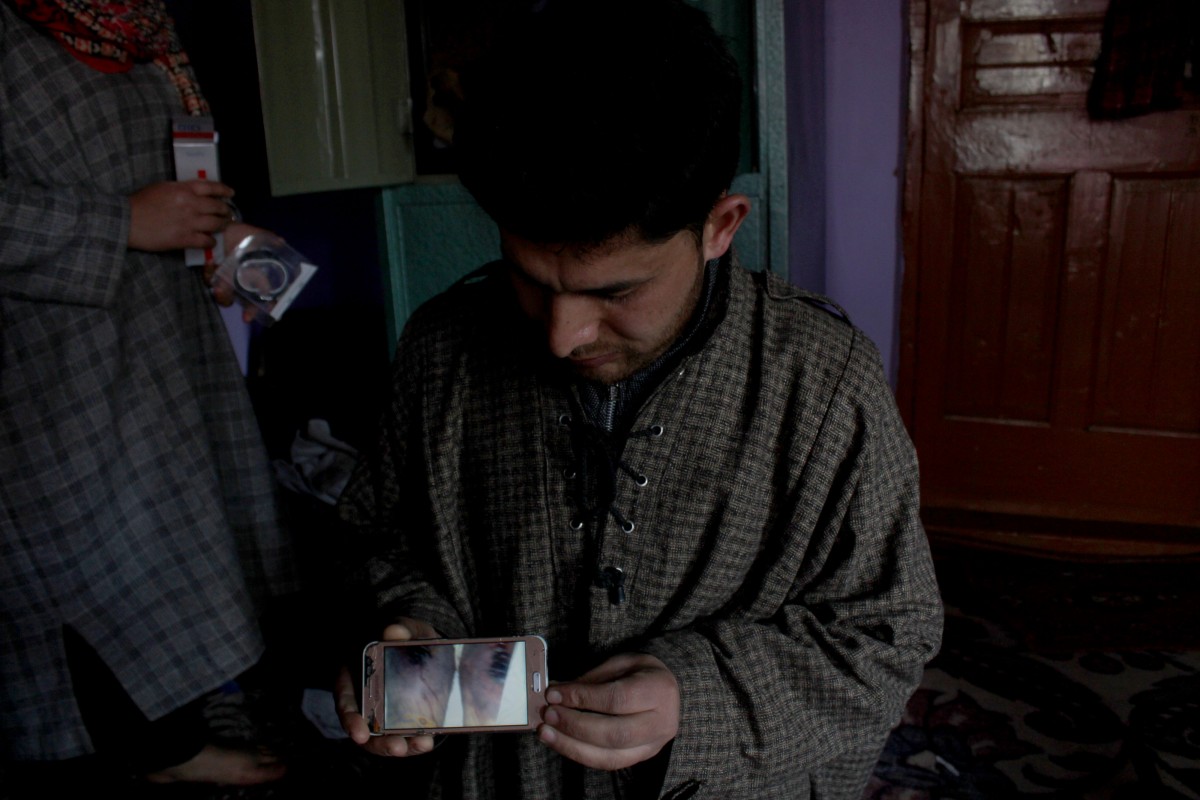 Rizwan’s brother, Mubashir, showing the lone picture he took of his brother’s body. It shows his legs with several burn marks and a swollen knee. Credit: Waseem Dar 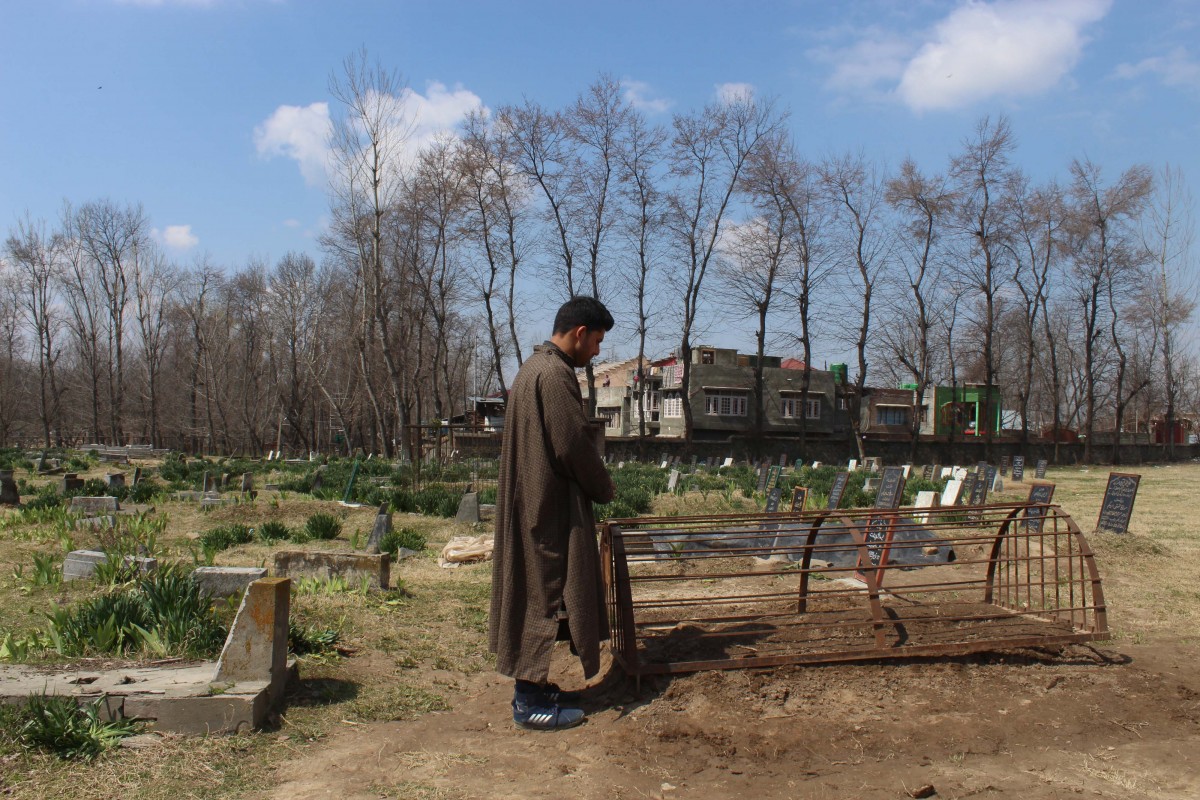 Rizwan’s brother standing at his fresh grave. He stands ready to accompany anyone willing to visit here from his home. Credit: Waseem Dar

Rizwan was picked up by the local police at around 10:30 pm during a late-night raid at his home on Sunday, March 17.

“We were sitting together as usual after having dinner and eatibg oranges that Rizwan had brought that evening on his way home and suddenly they (police) knocked on the door,” Mubashir said.

“They barged in and locked all of us in a room to prevent us from resisting their intended move of taking Rizwan with them without giving us any reason,” he says hurriedly, as if in fear that we will stop listening.

He opens the cupboard and brings out a polythene bag to show three odd oranges. “See what his last memory with us is; these clothes were also unpacked by them; Vuchiv haz yi, Yi ti haz (See this and that),” he says, while pointing to multiple things.

Mubashir and one of his sisters have the urge to show all of their brother’s belongings – clothes, books, shoes and, among many other things, the gifts he had got from his students after he rejoined his school this year after he was released this January from Kot Balwal Jail Jammu. Rizwan was lodged there since August last year, under the Public Safety Act which was subsequently quashed just after five months against the usual two-year term, declaring him innocent.

The birthday gifts comprise flowers, chocolates and written wishes his students had sent him. Rizwan had turned 30 on Monday, March 18 – the day between the two nights of his arrest and killing. 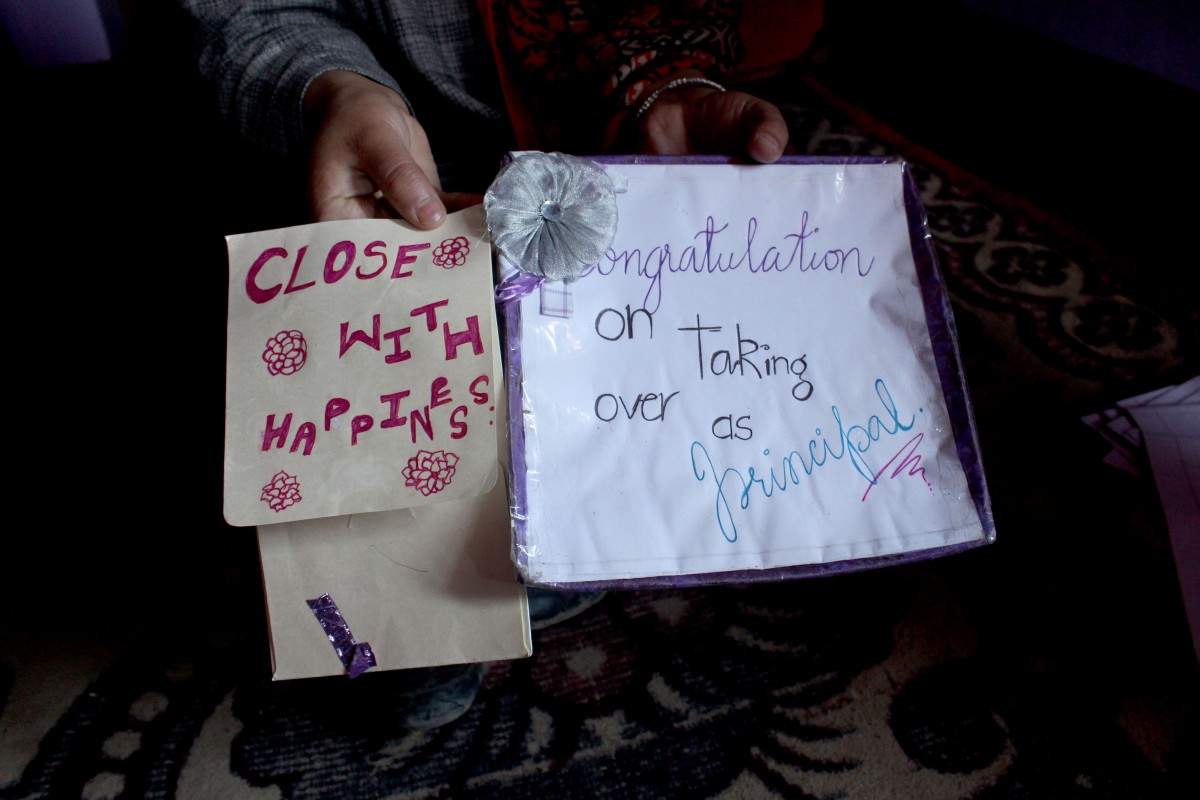 Rizwan’s sister showing the gifts he got from his students on several occasions. The gifts include those he got on re-joining his school this January and those sent to him on his birthday on the penultimate day of his life. Credit: Waseem Dar

The memories include his memoirs that he had brought home on his return from Dehradun Central University, where he completed his masters in chemistry. His sister shows me a white laboratory apron with names of his friends at the university and their parting notes like ‘Take care Rezvaan’, ‘I’ll always miss you’, ‘All the best’ and ‘Always keep smiling’ . 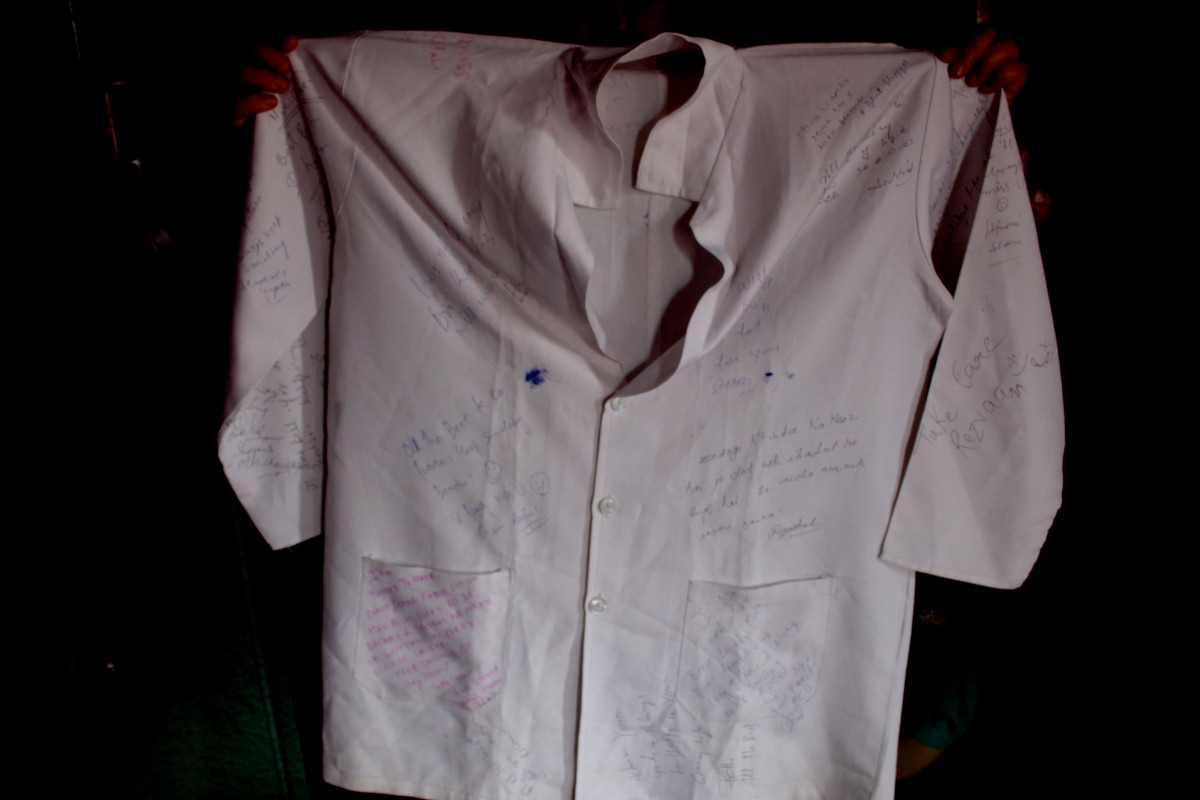 Rizwan’s laboratory apron from his days at Dehradun Central University. It bears the names of his friends and their parting notes are scribbled all over it. Credit: Waseem Dar

Sabir Abdullah Public School (SAPS), where Rizwan was the principal, wears a deserted look. Mubashir drove us there in his car. The school has been shut since Rizwan’s death. A peon, bursting into tears, welcomes us in at the gate. 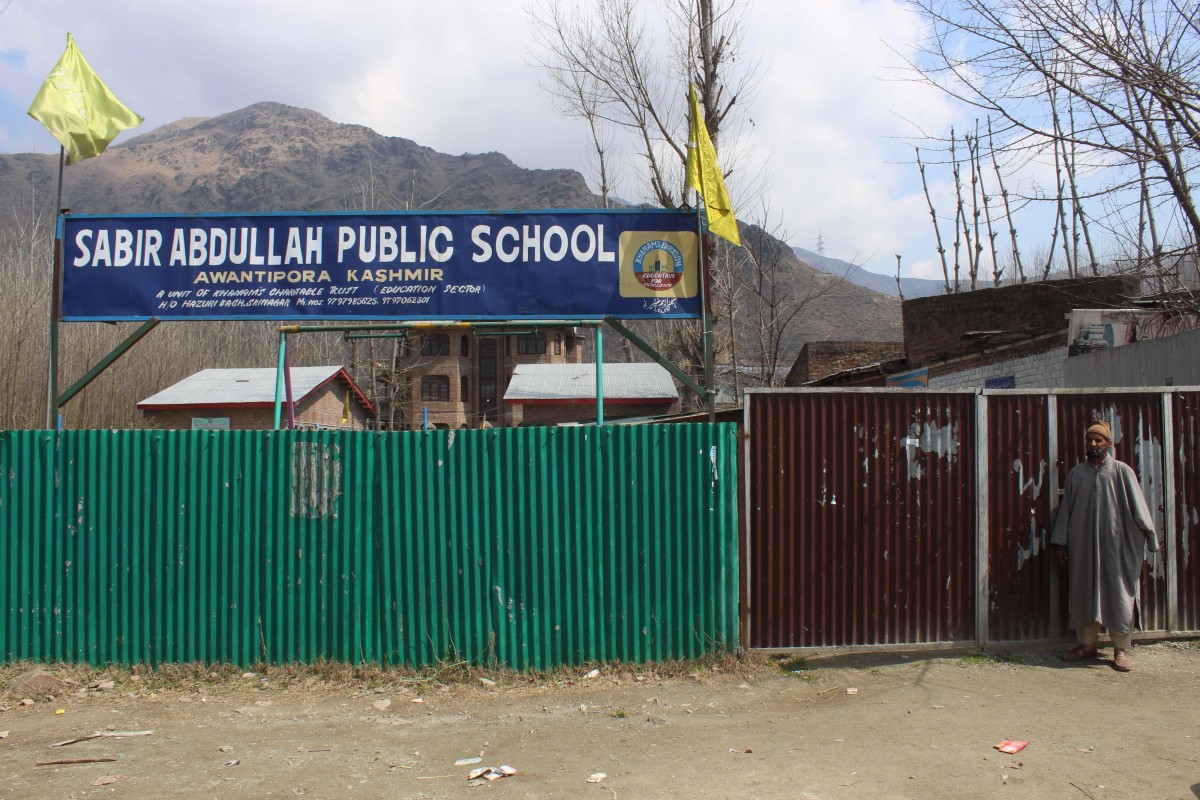 The shut entrance of Sabir Abdullah Public School where Rizwan was the principal. It hasn’t opened except when we visited it. Credit: Waseem Dar 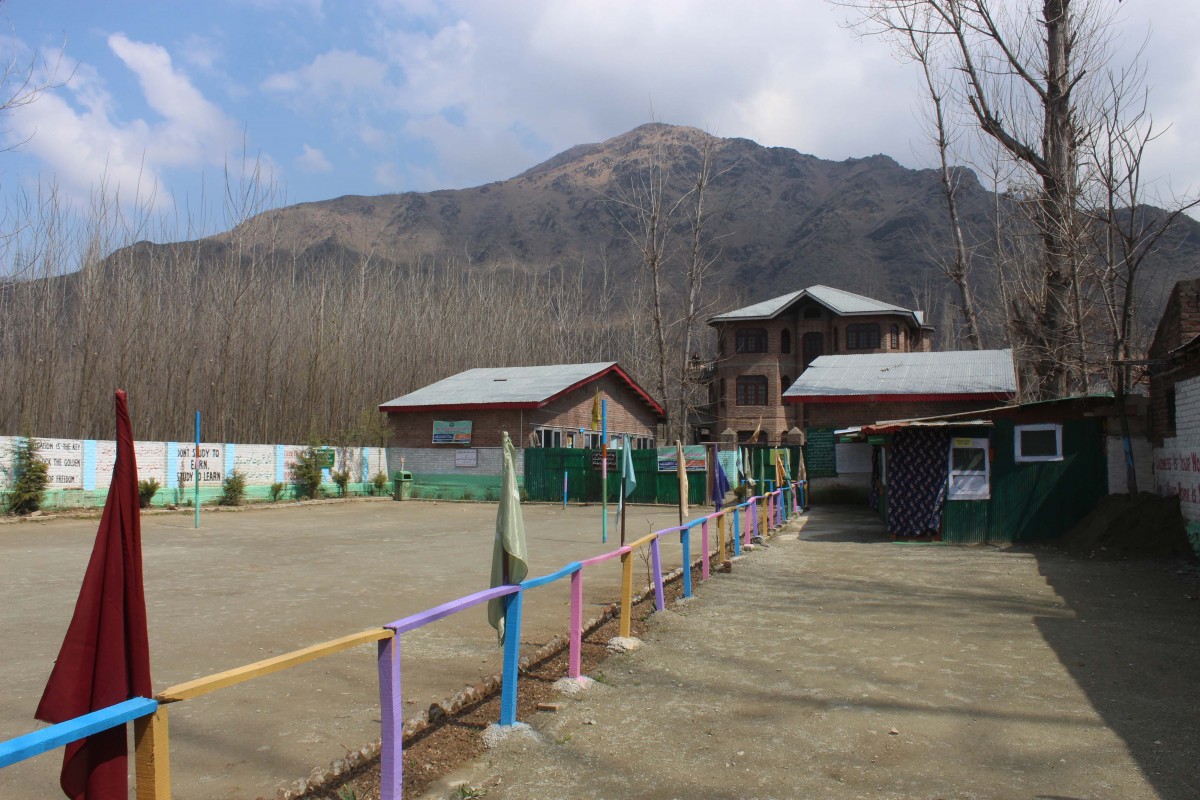 A deserted look of the school playground where Rizwan would occasionally play with his students. Now a large number of students throng his home. Credit: Waseem Dar

Inside the principal’s office lies a distinguished chair, behind a brownish grey table, holding some office papers, a pen holder, a calendar, a glass tumbler and a writing pad – all waiting for ‘The Principal’. 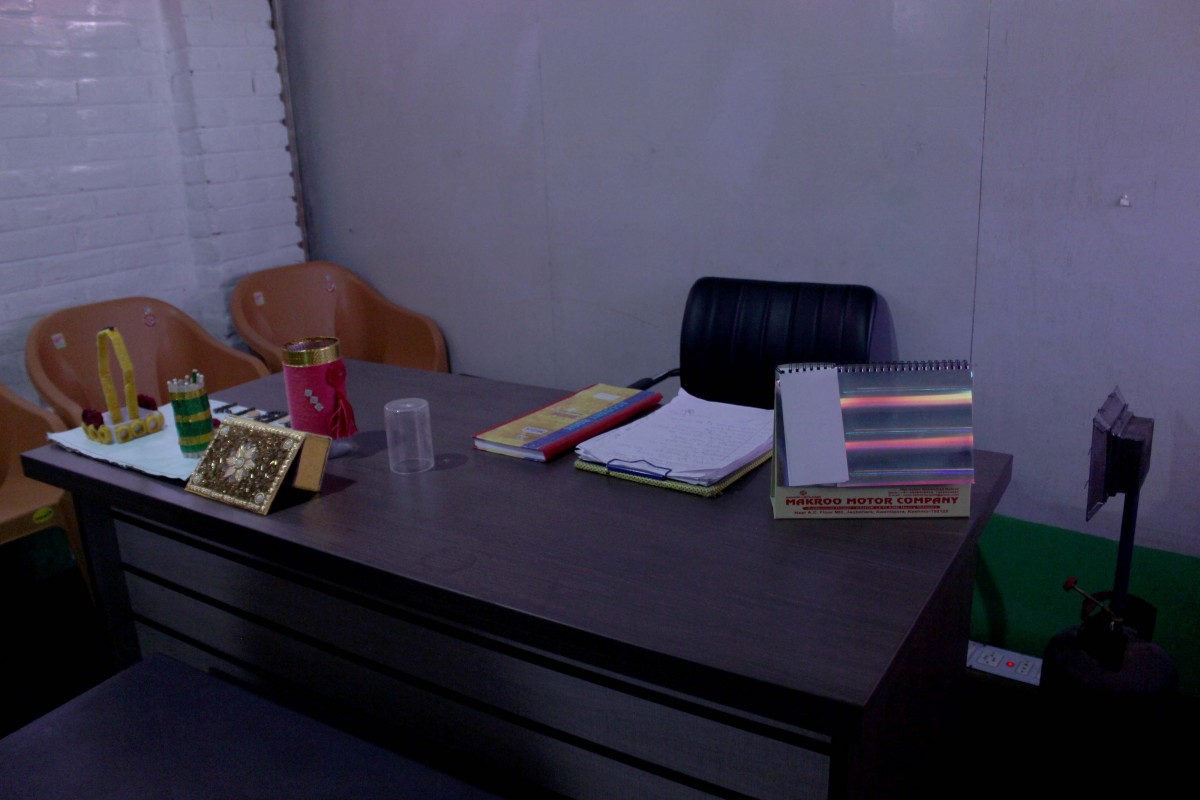 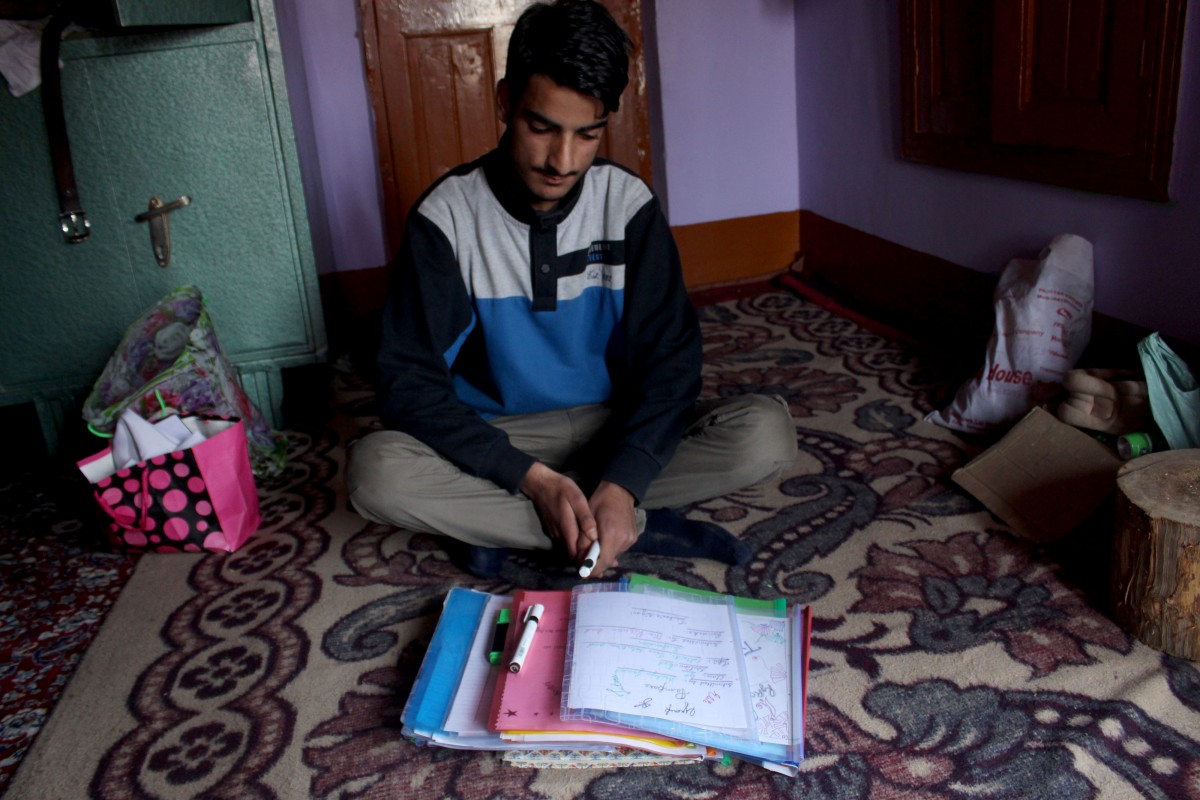 One of Rizwan’s students showing the assignments they had submitted to him the day before his arrest. They were left unevaluated. Credit: Waseem Dar

At his home, Rizwan’s students have been visiting more than everyone else. They narrate tales of his simplicity, friendly behaviour and affection towards them.

While leaving, we noticed one of his students eager to say something and asked him to comment:

“All I can say is that he was more like our loving brother than our principal. You can ask others as well. We knew him much more closely as we used to spend eight hours with him daily. He was our role model and will continue to be so even after his death.” 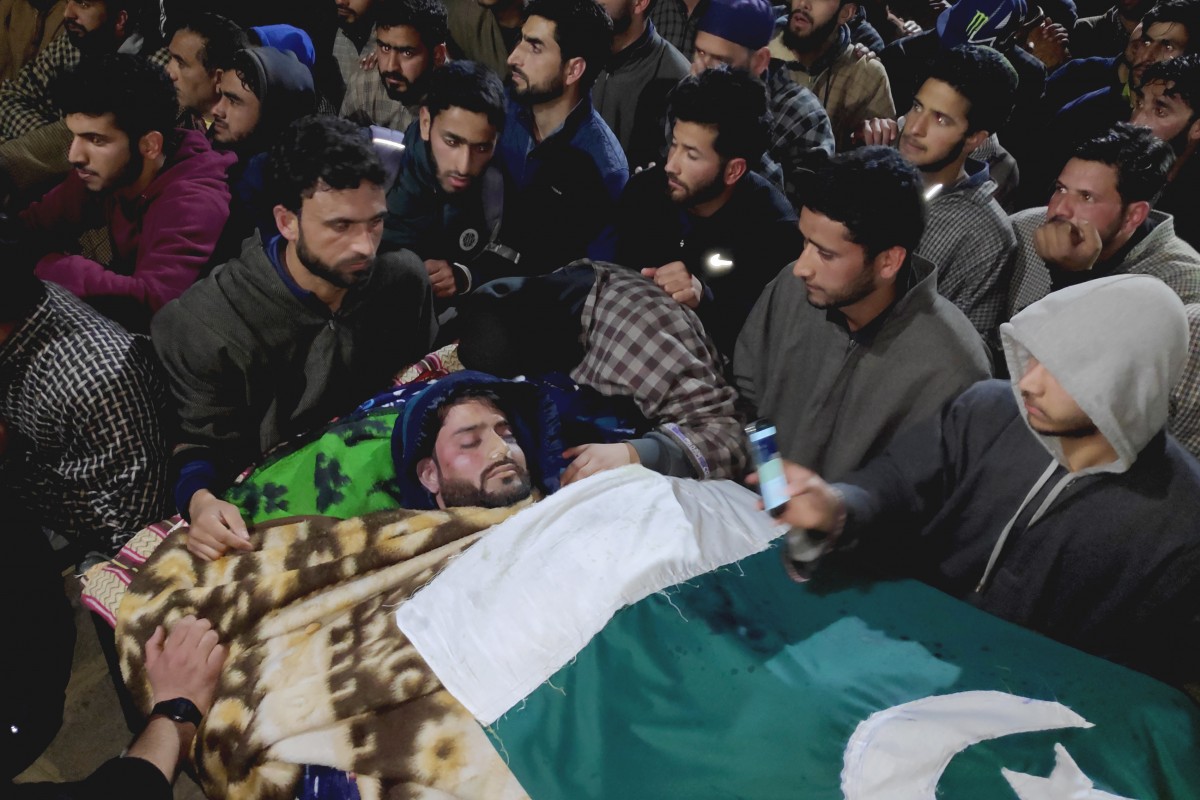 Rizwan’s body during a huge late-night funeral on Tuesday. It was delayed due to the local police initially refusing to bring the body home by themselves. Credit: Waseem Dar 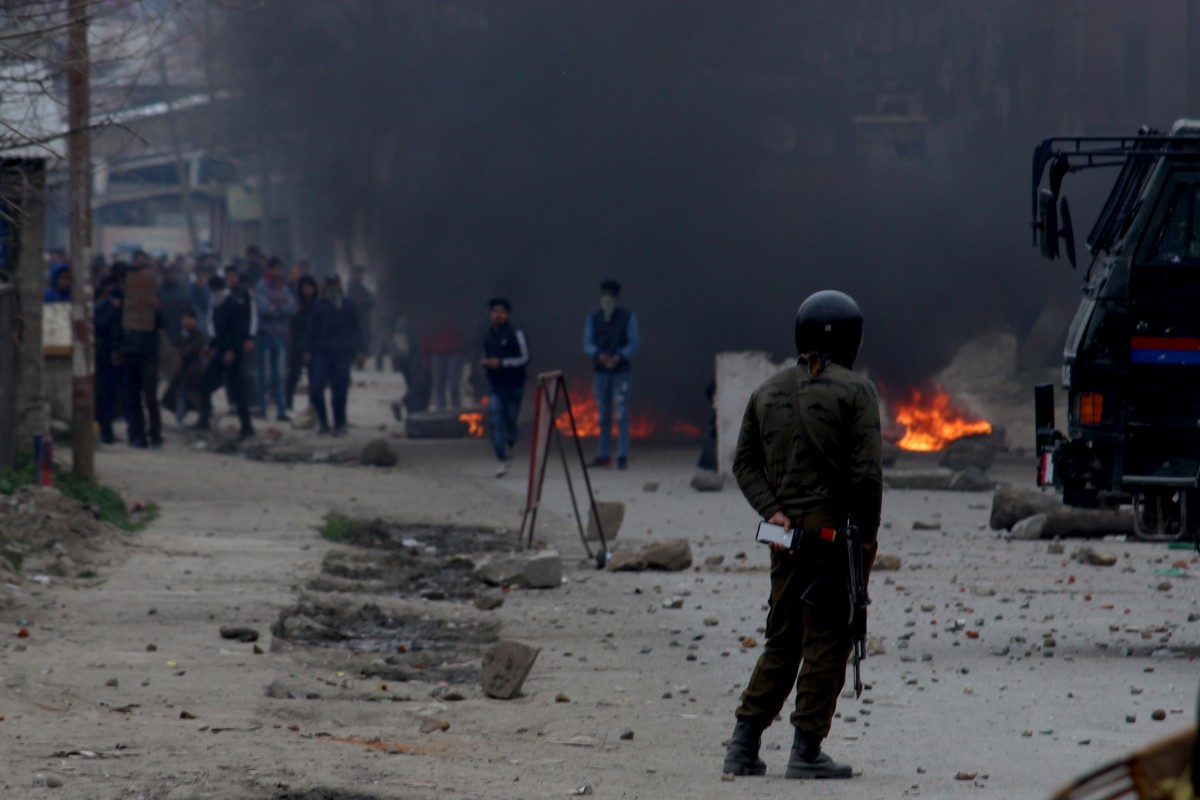 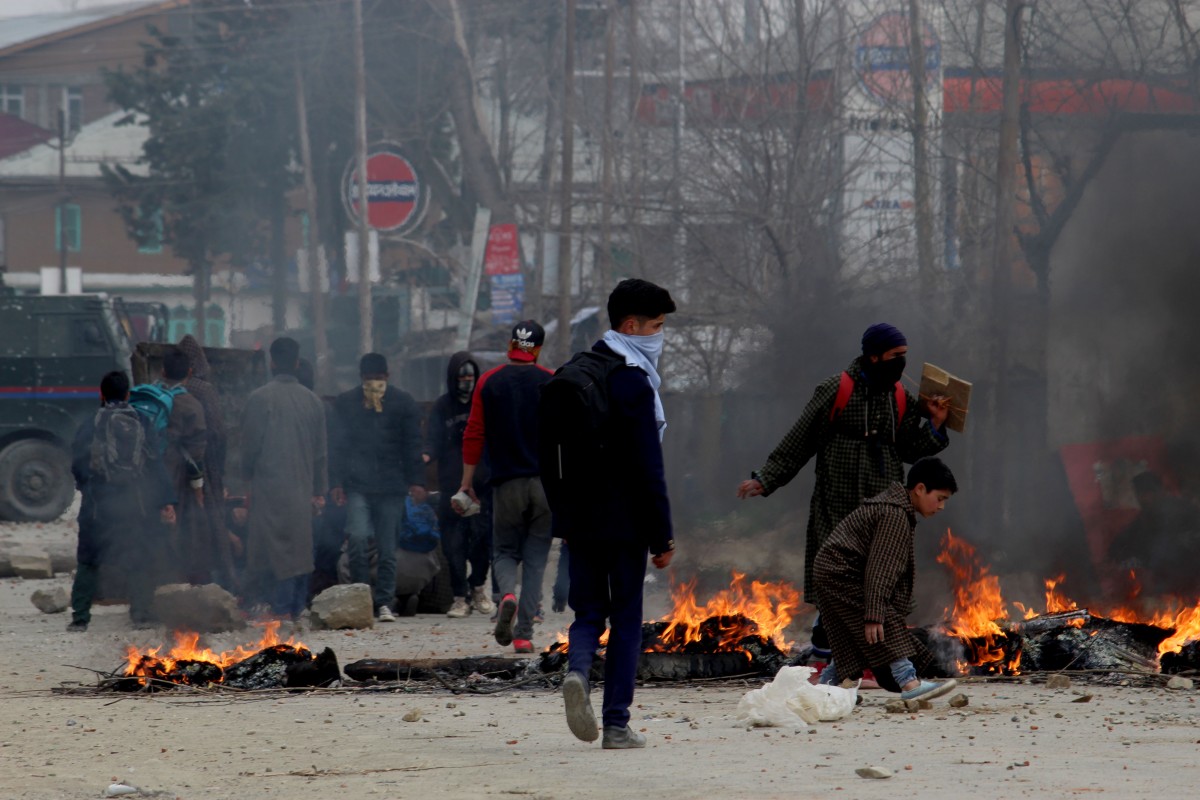 Youth, including some of Rizwan’s students, blocking the road with burning logs and rocks to enforce a strike in protest of the killing. Credit: Waseem Dar