Raising concerns over the role of the apex court, the citizens' jury said it had "erroneously equated migration with external aggression and dehumanised migrants.” 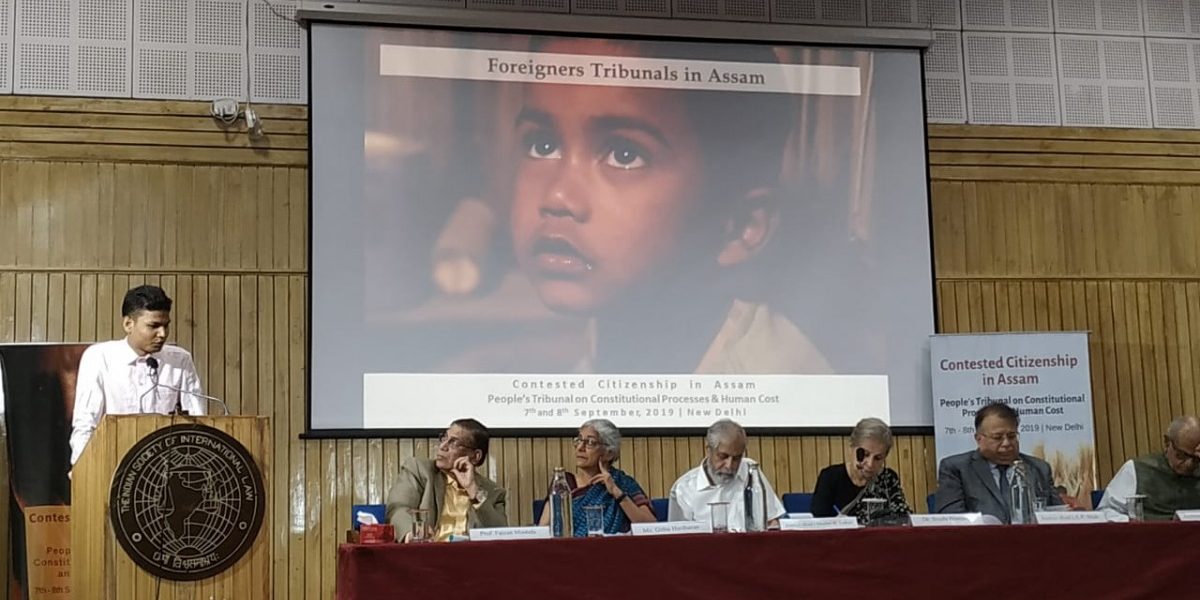 New Delhi: A People’s Tribunal’s on the ‘Contested Citizenship in Assam’ has come down heavily on the Supreme Court over its handling of the process of the National Register of Citizens (NRC) in Assam.

The Tribunal, in its hearing held on September 7-8, focused on four questions: Has the NRC process been in conformity with the constitution, what has been the role of the judiciary, what has been the human cost of NRC and what are the implications of extending NRC to all of India.

As per the jury’s interim report, weighing in on the role of the judiciary in “upholding constitutional processes and morality,” the Tribunal observed that the apex court had “erroneously equated migration with “external aggression” or invasion which, in effect, dehumanised migrants and infringed their rights to personal liberty and dignity.”

It further noted that despite the scale of the NRC exercise, the judiciary’s “insistence on setting deadlines” had “increased the pressure on both the process and the people involved.”

Through invoking of Article 355 to strike down legislation that would have placed “the burden in a foreigner’s case upon the state,” the apex court “established a constitutional requirement that the burden would always lie upon the individual accused of being a foreigner.”

The final NRC published by the office of the Registrar General of India on August 31, 2019, left out 19.06 lakh applicants, some of whose “views and experiences” were heard by the jury. Further, it took note of the circumstances creating and enabling the NRC process as well as the role of the government and the apex court in this exercise.

Burden of proof on ‘vulnerable’ people

The jury heard testimonies on the burden of proof being shifted to the residents to prove their citizenship. Further, the jury noted that documents related to birth and schooling being insisted upon, which are not always easy to furnish.

Even when these documents were provided, there were instances of them being discredited over discrepancies creeping in because of “English-language spelling of Bengali names” or “in age.”

People shared their experiences of “being thrown into detention centres”, with Harsh Mander noting that the conditions in such centres in Assam were “beyond abominable.”

“It is a jail within a jail, a situation of mass mourning,” he said.

Further, the jury noted, the conditions for release from detention camps are “difficult,” which “cannot be met by marginalised and vulnerable people.”

#testimonials from #AhmedMadani and #KismetAli
“My father is from Uttar Pradesh, I was born in Assam and I was picked up and thrown into a #DetentionCentre. @harsh_mander and @AmanWadud fought my case to prove that I am #Indian” – #KismetAli pic.twitter.com/mMXvW6MzeR

Following the people’s testimonies, Hariharan noted that the NRC process had put “already very disadvantaged people through the maze of an ill-conceived, arbitrary process – insensitive to their reality.”

The jury was also highly critical of the manner of SC’s “overseeing of the NRC process between 2013-2019,” saying that it raised serious constitutional concerns. It noted that there was “extensive use of sealed covers to determine the methods to establish legacies (family tree) under the NRC.”

Additionally, the court had undertaken what was essentially an “administrative process” – preparation of the NRC list. “When the courts ‘take charge’ of such processes, the system of remedies is virtually taken away,” the jury noted.

The citizens’ jury also took note of the possibility of “executive influence” in the functioning of Foreigners Tribunals which are not independent. “Tenure and salaries are decided by the government, keeping the members under the supervision and control of the appointing authority.”

Expressing concern that there was no sign of the humanitarian crisis that had been caused by the NRC abating, the jury said the process had pitted the “need of Assamese people for linguistic and cultural security” against “the human tragedy that has unfolded in the last two decades.”

Also read | In Fighting for NRC-Excluded, Rights and Aspirations of Assamese People Cannot be Ignored

It further noted: “The fear of getting excluded from the NRC, being declared as foreigner and finally being sent to detention centre, has created a situation of permanent paranoia among the vulnerable communities, especially Bengal-origin Assamese Muslim and Bengali Hindus living in the state of Assam.”

This fear, the jury said, had created “anxiety and pushed many people to suicide.”

Apart from focusing on the disproportionate burden placed on vulnerable groups, including women, the jury took note of violation of child rights in the NRC process. In several cases, it said, children born to single mothers/victims of polygamy were not mentioned in the family tree, leading to exclusion from the final NRC.

The jury said that while the notifications issued by the Central government did not formally initiate an all-India NRC, they did lay down the groundwork for such an exercise.

The National Population Register (NPR) notification “could allow collection and maintenance of sensitive and unprotected data and, possibly, be used to target vulnerable individuals and groups.” The NPR, it noted, “also violates the right to privacy.”