People With Disabilities Are Being Detained Under PSA in Kashmir

Authorities have accused Shabir Wani, who has a severe bone infection and walks with a heavy limp, of leading a mob armed with stones and wooden stalks after August 5 last year.

Shabir Wani of Padgampora, Awantipora suffers from osteomyelitis. He was detained under the PSA last year in August. Photo: Shakir Mir

Srinagar: Shabir Wani (34) climbs a flight of stairs running all the way up to a small room on the second floor of a run-down building where he works as a tailor. He hails from Awantipora, a pastoral village in South Kashmir. He flounders as he takes one step after another and nearly stumbles, grabbing the iron railing with his hands and steadying himself. “This is a routine occurrence,” he smiles sheepishly.

Wani suffers from a severe form of osteomyelitis, a bone infection, which has worn a deep crater into his skin on his right leg and is the reason he walks with limp. Yet strangely, he found himself detained in August last year and slapped with charges under the Public Safety Act (PSA), a controversial law that permits detention for up to two years without trial. Authorities have accused Wani of leading a mob armed with stones and wooden stalks last year, after the government revoked Jammu and Kashmir’s special status. “Do you think I could have done that?” he asks.

The use of the PSA has attracted widespread criticism for the arbitrary nature in which it has been applied in the past. Rights groups have accused the government of using the Act to silence dissent. As part of the post-August 5 crackdown, the government has booked all major political mainstream leaders under the PSA after six-month detention term under the Code of Criminal Procedure (CrPC) Section 107 approached expiry. The high court too has washed its hands of the matter, saying last week that using the PSA is left to the executive’s discretion. The government’s crackdown in the region has also affected those who have disabilities.

“Preventive detentions by their definition contravene international laws,” Parvaiz Imroz, Kashmiri human rights defender and recipient of the Rafto Peace Prize 2017 told The Wire. “It is unimaginable that someone who is cannot walk properly, is wheelchair bound or blind from one eye can actually threaten the security of the state.”

Yet such detentions have taken place in Kashmir. Individuals who are rounded up by the state often hail from poor families with scant resources to fight legal battles.

“The police turned up at my door and asked me to accompany them,” Wani tells The Wire. “I was driven to the local police station, where they kept me for two days before taking me to the Srinagar central jail.” 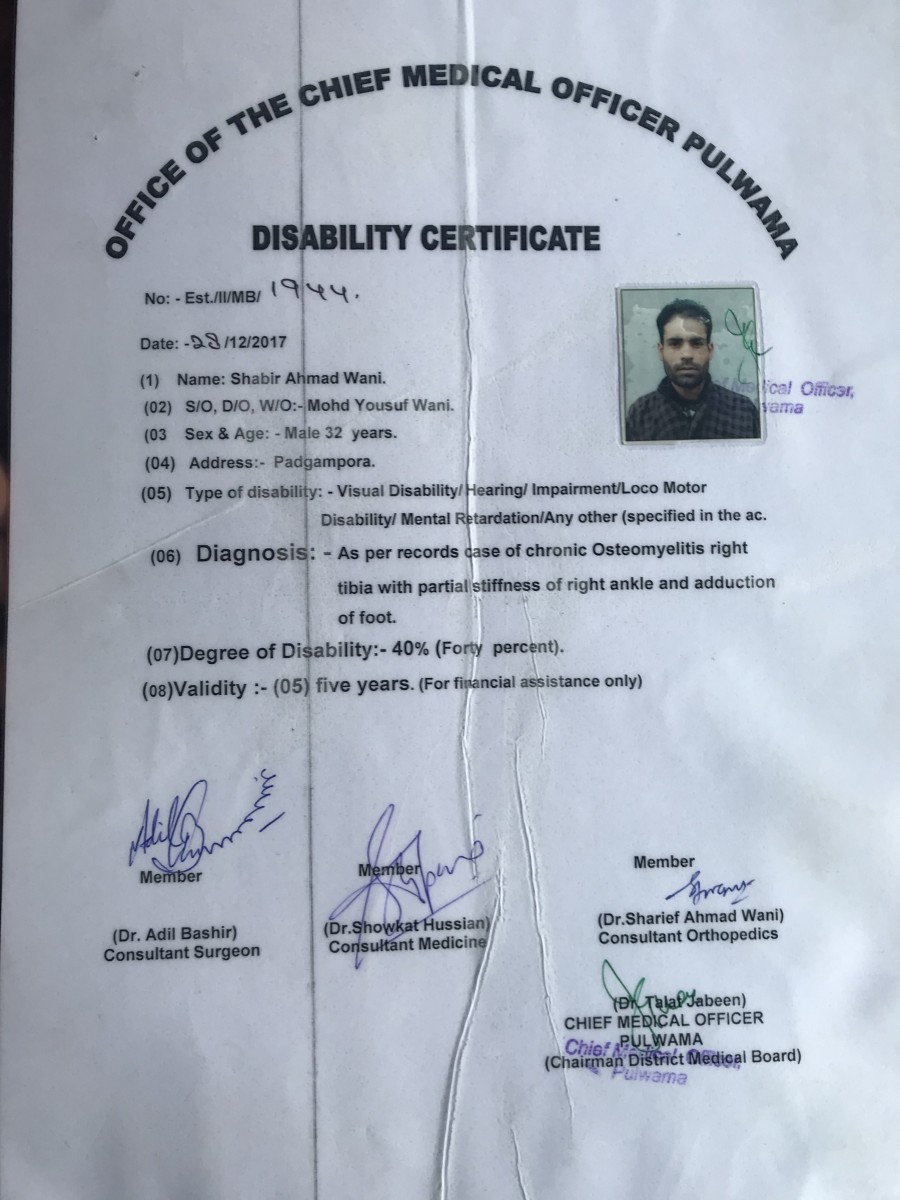 Despite the visible illness which impedes his movement, Wani languished in jail for more than five months before authorities revoked his PSA, releasing him. “We submitted all the documents of my ailments with the police,” he said. The Wire reviewed the medical documents that certify his disability from “chronic Osteomyelitis with partial stiffness of right ankle and adduction of foot”.

Last week, the Jammu and Kashmir high court announced that it will maintain a distance from the administration’s decision to slap PSA charges. The court held that preventive detention under the PSA is “based on suspicion or anticipation and not on proof” and that “subjective satisfaction” of the detaining authority to detain a person or not “is not open to objective assessment by the court”.

Critics have questioned the wisdom behind the judgement, insisting that it highlights the subordinate position into which the judiciary in the former state has been relegated. There is now the fear that the court has effectively arrogated outsized powers to civil servants to carry out the arrests under the PSA, while abdicating itself from responsibility to place checks.

“Much premium is being placed on the subjective satisfaction of the district magistrate who signs the PSA,” Imroz says. “But given the fact that they have also authorised detentions of people with serious disabilities, who could hardly pose a challenge to the security of the state or public order, it calls into question whether the right application of mind is being used. The very fact that these detentions happens should really leave us gasping for breath, that the court can actually raise both its hands in surrender and delegate full powers to the executive. It is self-defeating.”

The order was given while dismissing the petition seeking the release of Mian Qayoom, a senior Kashmiri lawyer and president of the Jammu and Kashmir High Court Bar Association. Qayoom (76) is suffering from an assortment of ailments, including a spinal injury. “He survives on a single kidney and has been diabetic for the last 20 years,” said Mian Muzzafar, his nephew who is also a lawyer.

Qayoom was detained in August last year and taken away secretively to a jail in Agra. “Authorities kept us in dark about his relocation,” he said. “He has been since kept in the isolation ward, where is health is rapidly deteriorating.”

When Muzzafar reached Agra, he says he found his uncle haggard and breathlessness; his eyes had sunk in and white hair growing all over his face. “We were hardly allowed to meet. He was experiencing chest pain. They had kept in under observation in a dispensary but he was shifted to the All India Institute of Medical Sciences and later to Tihar jail. Surprisingly, while the government had ordered his relocation to Tihar on December 30 last year, the authorities took the decision only on January 31. They sat on the order for about a month,” he said.

Qayoom has been a practicing lawyer for the last 40 years. He has been elected president of the bar association more than 20 times so far. In his PSA dossier, the police accuses Qayoom of harbouring “deep rooted secessionist ideology” through which he could instigate the public against the state.

Police has also invoked first information reports related to the events transpiring in 2008 and 2010 for which Qayoom had already been previously detained and subsequently released. “The cell in which he is being held is very small. He is being kept in the company of an HIV positive inmate and one more detainee who is mentally unwell. He eats in their midst. Imagine if anything happens to my uncle? Such a senior and respectable Kashmiri lawyer is being treated like a convict.”

In Sopore, a bustling town in the North Kashmir, Shaista Teli cradles her newborn son in one arm and holds the door ajar with the other, craning her neck. “I am alone in the house,” she says. “That’s why every time someone arrives I rush to the door to see who it is.”

She lives in a single-storey brick-and-mortar house accessible through a muddy walkway, because the tarmac ends several yards away from the house. “The structure is only half complete. We left it midway.” It was her brother-in-law, Waseem Teli (25), who worked as a day labourer and used the proceeds for the construction, while her husband, Waseem’s elder brother, took care of the family. The brothers lost their father when they were young. 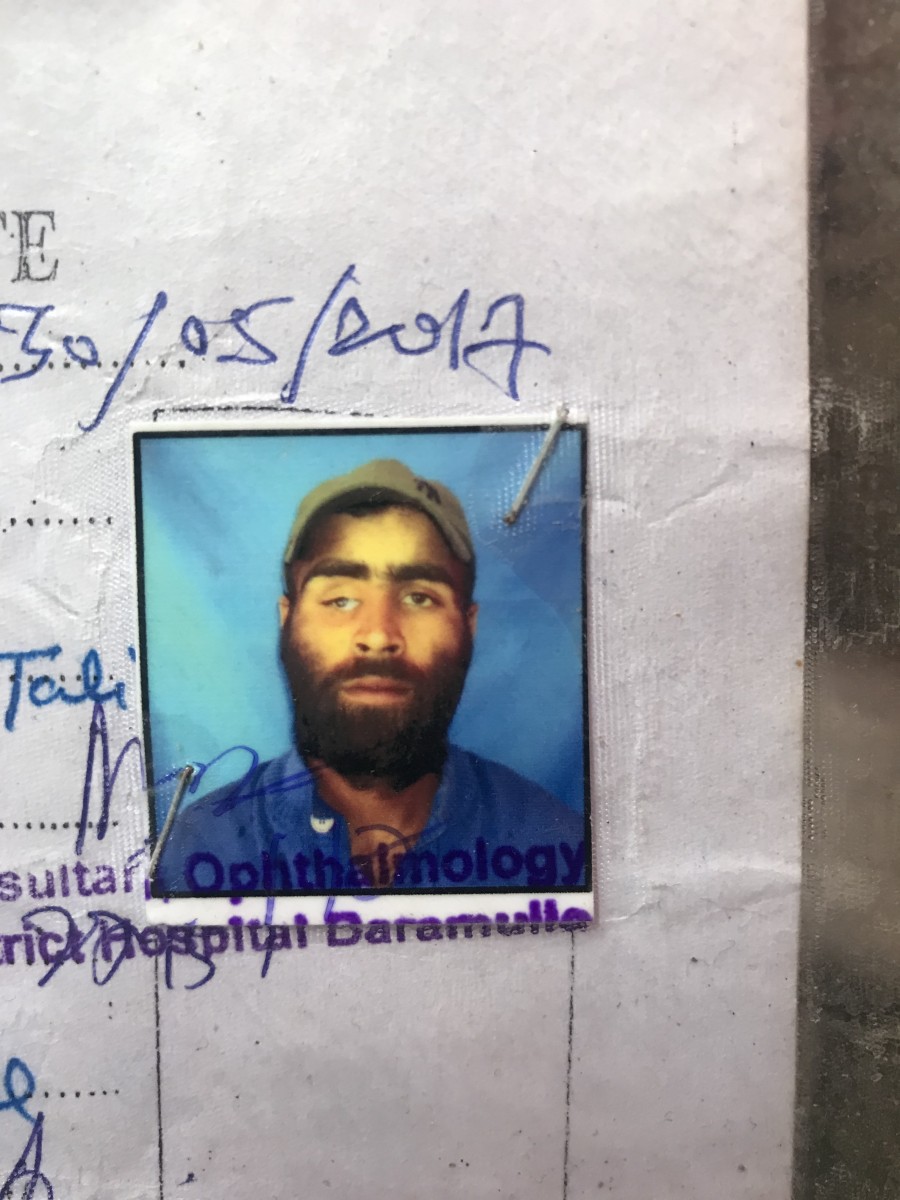 Waseem Teli of Naseerabad, Sopore, who is blind from the right eye. Photo: Shakir Mir

Days after the government read down Article 370 in August last year and went on an arrest spree, police arrived at the Telis’ door and whisked Waseem away. “They have accused him of stone pelting, but how can he do it when he is blind from one eye?” she asked.

Shaista walks up to a cupboard and pulls out a photograph of Waseem: he has a smooth beard and his right eye appears crooked. Waseem was hit by a rubber bullet in 2010, when Kashmir was embroiled in an agitation over the killing of a teenager student at the hands of the police. “He wasn’t part of protests but had come in the way of a stampede when the police was chasing away the demonstrators,” Shaista said.

The projectile had rammed straight into Waseem’s eye socket. “He has a synthetic eyeball now,” Shaista said. “He was arrested on August 10 and taken to Sopore police station. We pleaded with the police to release him on account of his condition. My mother-in-law literally put her scarf at the feet of the officer. He promised Waseem will be released in some days.”

But that did not happen. He was instead slapped with the PSA. Waseem is being held at Central Jail Srinagar. “He routinely complains of severe pain in his right cheek,” Aashiq Teli, his brother, tells The Wire. “We are seeking his release on medical grounds but that seems unlikely.”

The family has been in dire financial straits since then. “It took us plenty of resources and capital to reach Srinagar every day during shutdowns and meet his legal expenses,” Shaista said and gestured upwards. There is no ceiling in the house because it hasn’t been fully constructed yet. Instead, a big tarpaulin sheet hangs above, sagging at the centre, to keep out the cold, rain and snow. “We have been left with very little for ourselves.” 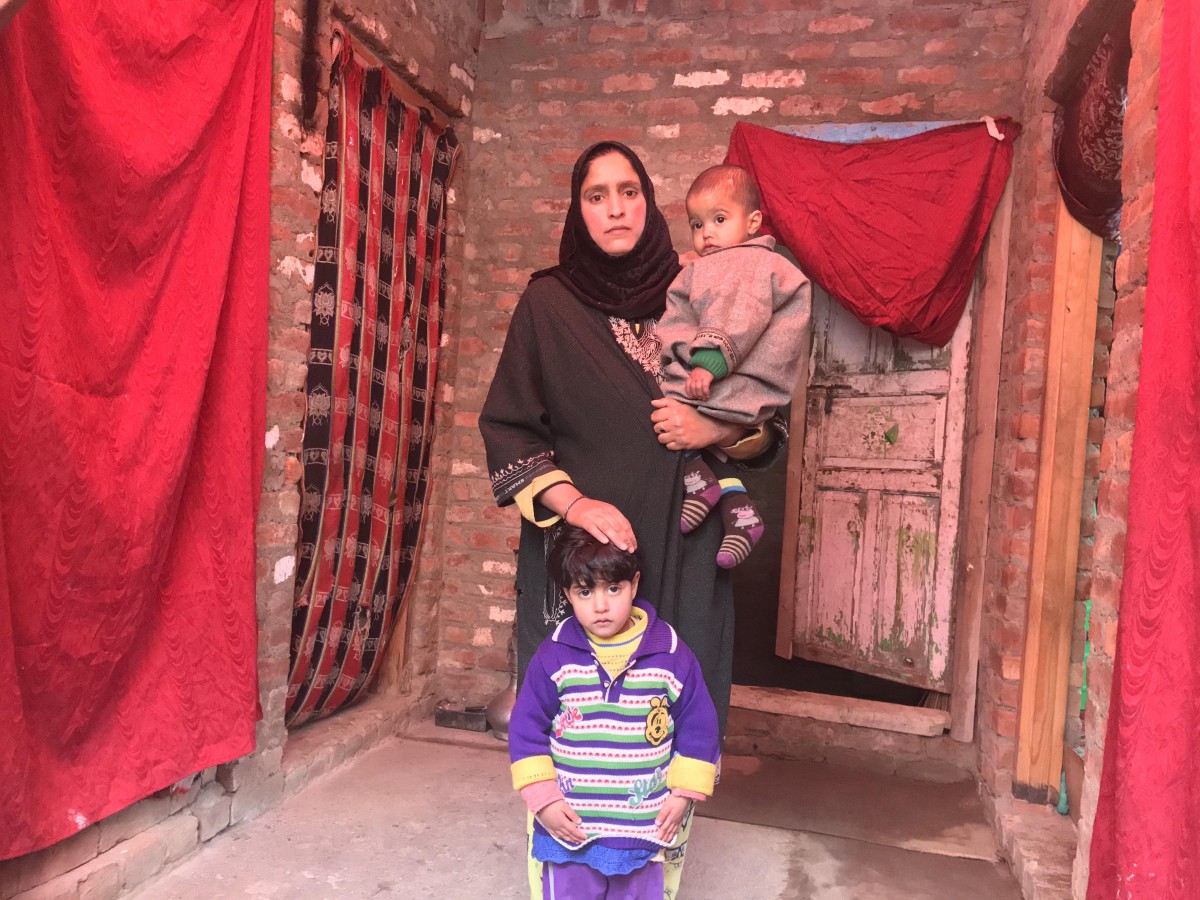 Nearly a hundred miles away, the family of Parvaiz Pala (30) finds itself in the midst of similar distress. Parvaiz was detained on August 6 last year from his home in Matibugh, a soporific village at the end of Kulgam district of South Kashmir. The Wire found no one at his house except his sister Misbah. “My brother is in Jammu for treatment, he was released recently on medical grounds,” she said. Parvaiz, a labourer by profession, suffers from throat cancer since 2017.

He was detained under the PSA and taken to jail in Bareli, Uttar Pradesh. His family challenged the detention in the J&K high court, insisting that Parvaiz was innocent, and sought compensation of Rs 10 lakh from the state. “It’s journalists who helped us secure bail for him,” Misbah said. “His throat has swelling; he can barely talk properly, let alone become a security threat for a state.”

With Parvaiz gone, the family has been getting by on borrowed money. “My studies have affected,” Misbah said. “I wanted to become a lawyer so that we don’t have to spend huge money if someone else is detained in such a way tomorrow. But I don’t have the means to fund my education. Plenty of money is already being spent for my brother’s treatment. I will have to leave my studies midway through.”

In Awantipora, Wani furnishes one document after another. From the last 17 years, he has been earning a living by stitching clothes. “When I stand for extended hours, I can hardly bear the pain in my abdomen.” His PSA dossier accuses him of instigating “common masses to resort to violence”.

“On the date mentioned in the PSA document, Shabir and I were in my parent’s home in a different village,” his wife tells The Wire. “Also it is practically impossible to commit such an act of violence on the place that’s been mentioned because our village is cut off from the rest of Awantipora town whenever there is civil disturbance. There is a CRPF camp at Padgampora. They block the key road with razor wires. There’s no question of my husband crossing it and indulging in violence on the other side with a defective limb.”

Shakir Mir is a Srinagar based journalist.