Nearly two dozen victims of pellet guns have been treated for injuries at the Sri Maharaja Hari Singh hospital in Srinagar over the past few days, belying officials claims of "calm". 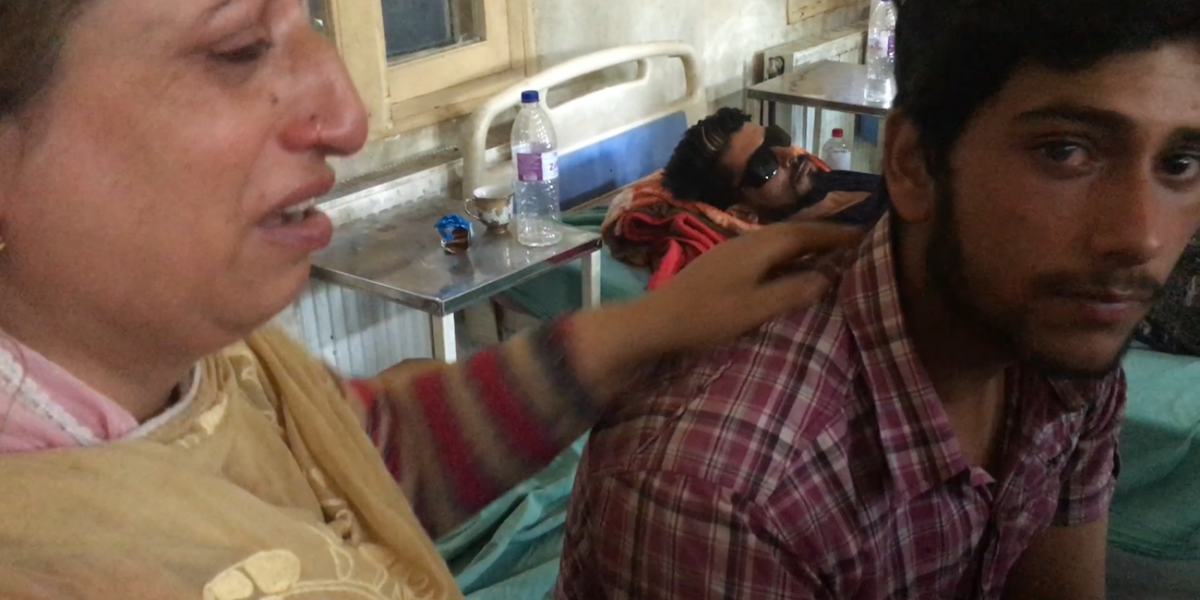 Nadeem, a 15-year-old boy from Natipora in Srinagar has lost his sight in one eye after being hit by pellets on Wednesday. Next to him is his mother. Photo: Siddharth Varadarajan

Srinagar: At least 21 young men and boys were brought in to Srinagar’s main hospital for treatment for pellet injuries in the first three days after the Modi government announced the scrapping of special constitutional provisions for Jammu and Kashmir, and the end of its status as a state, The Wire can confirm.

Although hospital administrators ducked a formal request for information, doctors and nurses at the SMHS hospital said on Thursday that 13 victims were brought in on August 6 and another eight on August 7 with pellet injuries to their eyes and other parts of their bodies. Several of them have lost their sight in one eye; in a few cases, there is danger of both eyes suffering irreversible damage.

Although there have been reports of one young protester succumbing to his injuries, no one in the hospital was in a position to confirm this.

The Wire met with some of the victims and their families in Ward No. 8 of the sprawling hospital. Some said they were shot during protests in the city’s downtown area while others say they were targeted by the security forces even though there was no stone pelting going on at the time.

Apart from belying claims in a section of the media that the situation in the Valley is “calm”, the accounts of those injured by pellet guns paint an unflattering picture of the uncertainty which has gripped people’s lives since the Modi government announced on August 5 that it was doing away with Article 370.

The announcement was preceded by a lockdown – which carries on to this day – in which the mobile and landline network has been shut down, internet services snapped, newspaper publication suspended and a continuous curfew imposed whose rules have not been stated or defined formally.

On some main arteries, particularly in the vicinity of major hospitals, traffic is permitted – albeit with baffling detours around barricades of concertina wire. Also, getting into and out of particular neighbourhoods can be challenging, especially for those who don’t have their own means of transport. Within their neighbourhoods, people do venture out and about, and in the evening the odd kirana or fruit vendor or baker may open for business briefly. But the lack of certainty about what is allowed and what is not means mundane activities can sometimes bring sharp and painful costs.

Also read | Kashmir, Modi and the Temptations of a New Imperium

Nadeem, a 15-year-old boy from Natipora in Srinagar ventured out for tuition with another boy when he was hit by pellets on August 7. He is being treated, but says he can see nothing from his right eye. 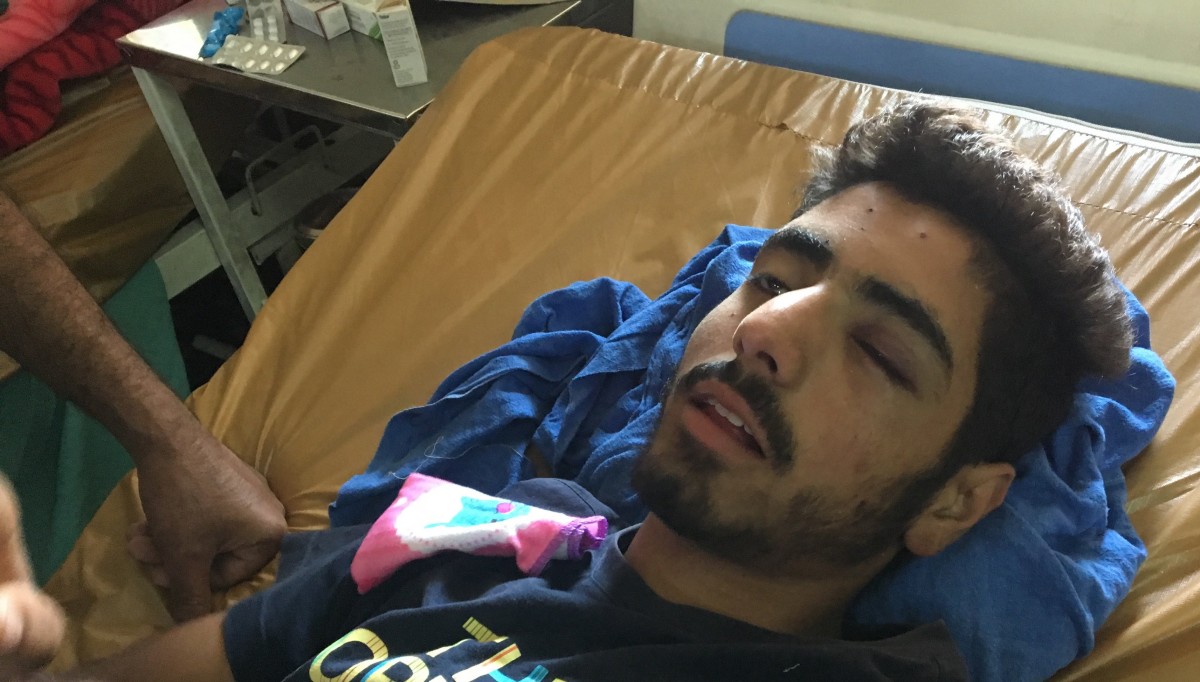 Another young man undergoing treatment for injuries to his eyes. “I can’t speak to you, I’m sorry, my head is bursting”, he said. Photo: Siddharth Varadarajan

Two young men from Ganderbal are also being treated for injuries to their eyes. One of the men, a worker in a bakery, was seething with anger and refused initially to speak to this reporter. “I don’t want to talk to anyone from Delhi, what is the point? Do any of you even want to hear what we have to say?”, he said, with dark glasses covering both his injured eyes.

However, his friend, who was also injured though not as seriously, described what happed. “We were making rotis in our shop when the security forces said, ‘Are you going to feed Kashmiris bread? You should feed them poison.’ Then they shot into our shop and left us,” he claimed. 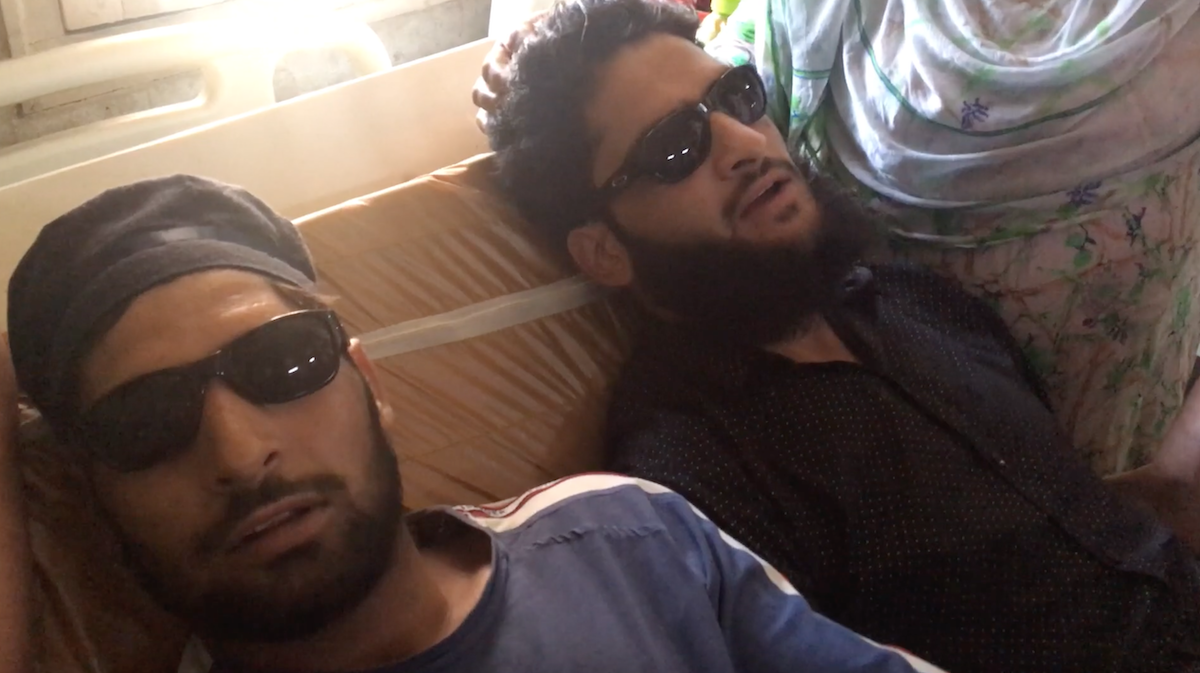 It is impossible to verify or confirm their account of the incident. But the injuries they had were real, of that there was no doubt. Nor was there any doubt about their anger.

While one of the victims said the only option now was for more and more people to take to arms, the father of one of the young men said the government should realise that injuring people with pellet guns in this way was no way to convince them about the correctness of government policy.

He was also scathing about the telephone ban. “I am not getting into what he has done over Article 370 right now but what Amit Shah has done – to separate father from son, husband from wife, sister from brother, none of us have any information about where our sister is, our mother is … Even if he wanted to shut down the internet, he should have at least kept our phones going. This is the sort of thing the Zionists [Israelis] do. I am sure Amit Shah is not an original Hindu, a Hindu would never do this. He is behaving like a Zionist.”