IAS officers of the 1968 batch have petitioned Rajasthan chief minister Vasundhara Raje, demanding that the gau rakshaks responsible for Pehlu Khan's death be arrested at once. 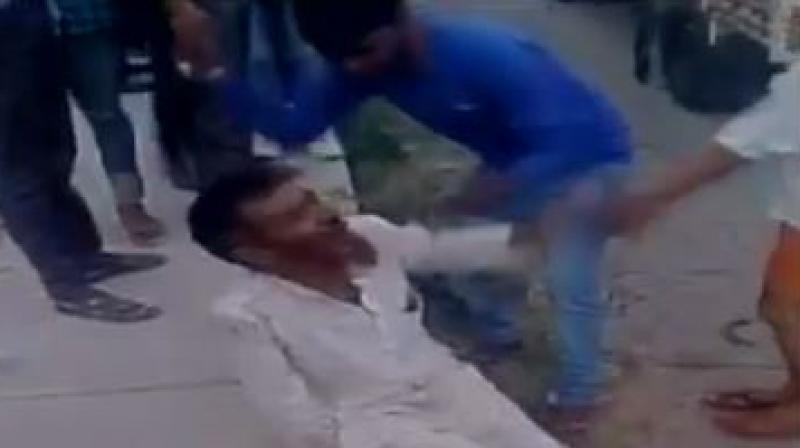 Pehlu Khan, who died of the injuries from the assault on April 1. Credit: Video screen grab

On April 23, the 1968 batch of IAS officers, including former West Bengal governor Gopalkrishna Gandhi, wrote to Rajasthan chief minister Vasundhara Raje, demanding that all those responsible for the lynching of Pehlu Khan be arrested. The officers have sought Raje’s intervention after Khan’s uncle threatened to commit suicide in protest since only three of the six attackers have been arrested so far, with the police claiming that they have been conducting raids to nab the other three who are on the run.

Khan and four other dairy farmers were lynched in Alwar, Rajasthan, by gau rakshakhs for transporting milch cattle back to their village in Haryana.

On April 1, Khan and four other dairy farmers were returning from a cattle fair when they were attacked by a group of gau rakshaks in Alwar, Rajasthan. Although Khan and the others had the necessary documents of their purchase, they were assaulted mercilessly. Khan succumbed to his injuries two days later. But justice has been slow to come by. While 19-year-old Vipin Yadav, one of the six accused has been upheld and compared to Bhagat Singh, the Rajasthan government has failed to officially condone Khan’s death.

The IAS officers’ petition sent to Raje noted, “While one may have strongly differing sentiments on the importance of cows, and their slaughter or consumption, the killing of Pehlu Khan by an arbitrary self-appointed group of vigilantes shows us how much we have succeeded in undermining the most basic principles and values on which we have based our nation.”

It warned Raje that if such vigilantism was not promptly dealt with, it would corrode democracy within the country by emboldening gau rakshaks to flout the rule of law.

“There has been a reprehensible attempt on the part of certain people in authority in Rajasthan as well as in the Union government to deny this horrific incident, or to minimise its gravity. Other authority figures, whose duty it was to make on example of the perpetrators of this crime, have made themselves complicit by their inaction and silence,” the petition said.

Failing to act on the matter decisively, the statement warned, would lead to a mockery of good governance, causing minorities to lose faith in the government’s ability to protect their rights. As a consequence, the officers also demanded that police officials be held responsible for dereliction of duty.

Read the full petition below:

The petition comes on the back of several other initiatives to demand justice. On April 17, over 200 people held a dharna in Jaipur to condemn the attack and demand justice for the victims. On April 21, Congress leaders in Rajasthan met governor Kalyan Singh and called for a CBI probe into the incident.