The police under the Congress government had filed a chargesheet in the case on December 30 last year. 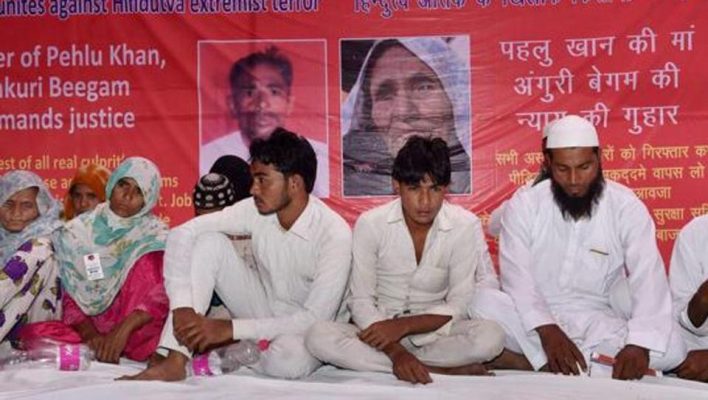 Jaipur: A week after the news of Pehlu Khan’s sons being chargesheeted caught the media’s attention, the Rajasthan police under the Congress government moved an application in the court to seek permission to further investigate the case. Dairy farmer Pehlu Khan, who was lynched on April 1, 2017, and his sons have been charged with illegally transporting cattle.

“There are certain issues in the case that we want to further investigate. One being the claim made by the accused that they were taking the cattle to Tapukara village in Alwar and two, the owner of the pick-up truck [that was used for transporting cattle] has claimed that he had sold it before the incident took place. Although, it is still registered in his name,” he added.

The family’s lawyer is hopeful that the reinvestigation will mean that the chargesheet will be quashed.

“We have been continuously been saying they [Pehlu Khan and his sons] were taking the cattle to Tapukara village in Alwar, not Nuh. If the police want to reconsider that they were transporting it within the state then it raises hope that the case could be dismissed,” Kassim Khan, advocate for Khan’s sons, told The Wire.

Pehlu Khan and four others, including his two sons, were attacked by self-styled cow vigilantes in Behror, Alwar while they were on their way with cows they had purchased at a cattle fair in Jaipur. Accusing them of being cattle smugglers, the mob assaulted them for almost three hours on April 1 evening. Pehlu Khan succumbed to his injuries two days later.

An FIR was filed against Khan and his sons, Aarif and Irshad, on April 2 accusing them of trying to transport the cattle out of the state without permission under Sections 5, 8 and 9 of the Rajasthan Bovine Animal (Prohibition of Slaughter and Regulation of Temporary Migration or Export) Act.

While concluding its report on December 30 last year, the state police chargesheeted Khan and three others, including his two sons, Irshad and Aarif, for illegally transporting cattle. The chargesheet had also named the owner of the pick-up truck that Khan and the others were using when the lynching took place.

The chargesheet against Khan was presented in the court of additional chief judicial magistrate in Behror on May 29, 2019.

The previous investigation had found that Khan had purchased two cows and two calves from a cattle fair in Jaipur and had a permit from the Jaipur municipal corporation. But under the Bovine Act, the competent authority to grant permission for transporting any bovine animal outside the state is a district collector. The chargesheet stated that the collector, in a letter dated April 23, 2017, said his office did not grant permission to Khan and his sons.

Khan’s sons had said that they were taking the cows to their homes in Haryana. Later, they submitted an affidavit in the court, pledging that they were transporting the cows to sell them to their relatives in Chor Chavandi near Tapukara, a village in Alwar. They said they had the rawana, receipt of fair tax, tolls and other fees payable under the Act to transport the cattle within the state.

Following backlash, chief minister Ashok Gehlot had tweeted, “The Congress party is ideologically committed against any kind of Lynching anywhere in the country and our government is vigilant to ensure it will not have happened again.”

“Name of Late #PehluKhan is not there in the chargesheet submitted by #Rajasthan Police in December 2018. This is a separate case which was registered and investigated under previous government in 2017-18 against Mr Arif, Mr Irshad and Mr Khan Mohd (Transporter), since accused name in the chargesheet were not present at the time of the submission in December 2018, the District court accepted the Challan on 24th May 2019. However, our government will see if investigation was done with predetermined intentions.”