Activists said almost 10% of the population in three blocks has been charged under several draconian laws, including sedition.

New Delhi: As many as 30,000 people have been charged under the alleged offence of engaging in the peaceful Pathalgadi movement in tribal territories in Jharkhand. This amounts to almost 10% of the population of the Khunti, Arki and Murhu blocks of the state and makes every tenth person living there an accused. These and many related numbers that reflect the particular plight of tribals in the region came up as social activists across a broad spectrum of fields held a sit-in protest at Ranchi’s Raj Bhavan on Monday, July 22, against the use of the sedition law to threaten, incarcerate and oppress tribal people of Jharkhand’s Khunti district.

The protest was organised by the activists’ network Jharkhand Janadhikar Mahasabha, which said police have registered as many as 29 FIRs, each naming a few persons but including thousands of unnamed accused. Some FIRs mention “5,000 others” while some others mention “3,000 unnamed people”. In total, the number of accused approximately comes to 30,000.

The protesters, who included economist Jean Dreze, poet Jacinta Kerketta, activist Siraj Dutta among others, alleged that the brunt of the government’s crackdown was being borne by Adivasi villages of the district where the Pathalgadi movement has been on for the last two years.

The protesters said that instead of engaging in dialogue with the those who have upheld the longtime traditions of Pathalgadi, the government has with the help of police, repressed members of the tribal community sometimes through raids and often, through acts of open violence. The press release mentions police attacking a Pathalgadi ceremony at Ghaghra village in Murhu block. Several men, women and children were beaten up, says the release. In addition, the practice of interrogating tribals has become synonymous to inflicting violence. 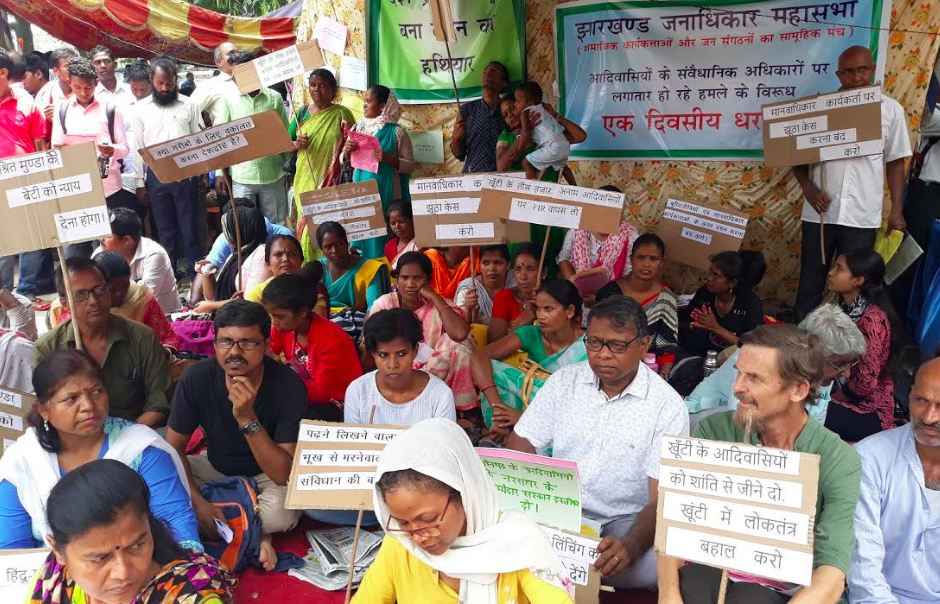 The site of the protest for tribals’ rights at Ranchi. Photo: Jharkhand Janadhikar Mahasabha

Attention was drawn by the protesters as to how Khunti villagers have long since been displaced and their land forcefully acquired between 1951 and 1995. The government’s attempts to weaken the Chhotanagpur and Santhal Tenancy Acts was also mentioned.

The protesters also shed light on the recent warrants issued against four prominent activists who have worked with tribals and raised the issue of their rights – Stan Swamy, Vinod Kumar, Aloka Kujur and Rakesh Roshan Kido.

Mention was also made of the state government’s sustained attempts to weaken the powers of the gram sabhas of the tribals.

Among demands made by the protesters was a plea to the government to withdraw frivolous FIRs against Khunti residents and undertake judicial inquiry into police violence.

Lastly, the protesters also asked for dialogue between the government and representatives of Pathalgadi villages, in addition to the implementation of provisions of the Fifth Schedule and the Panchayats (Extension to Scheduled Areas) Act.