Over the Last 75 Years, Struggles of India's Tribal Communities Have Multiplied

Instead of being recognised for their conservation efforts and relationship with nature, tribal communities are paying the price for 'development'. 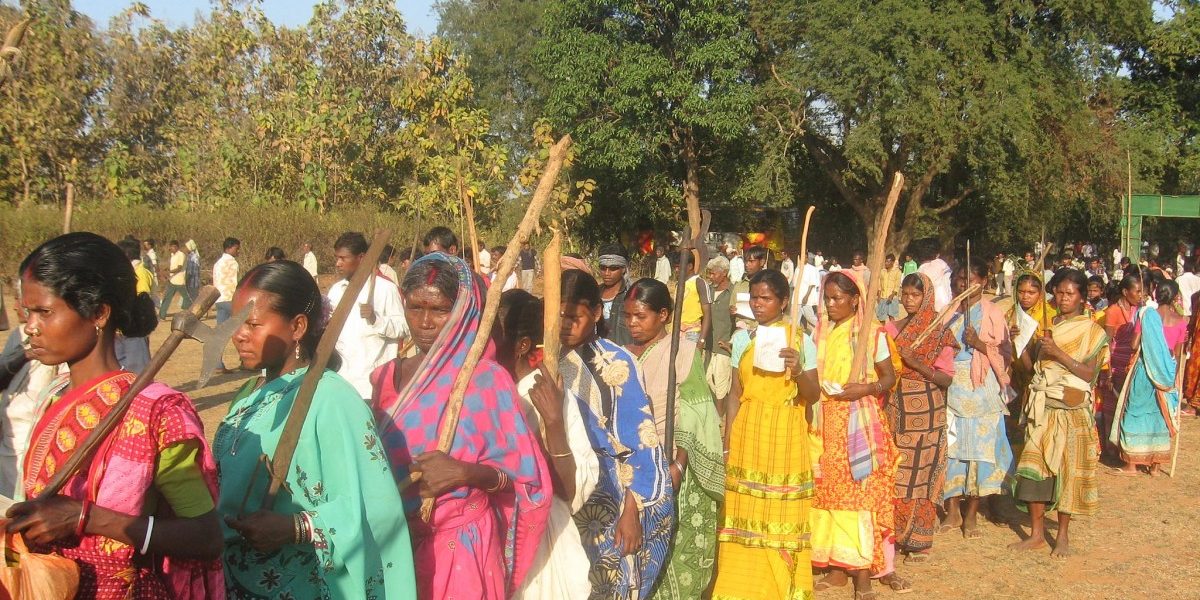 History stands witness to the glorious role Adivasi and indigenous farming communities have played in preserving water, forests and land in the past. They fought off ferocious animals, cleared bushy forested regions, set up villages and inhabited those areas. The linguistic and cultural identity of the Adivasi and indigenous communities has evolved in the lap of nature amid these forests, rivers and mountains.

The Chotanagpur Tenancy (CNT) Act of 1908 and the Santhal Pargana Tenancy (SPT) Act of 1949 were passed with the sole aim to preserve and develop the relationship between tribal and indigenous communities and their natural and pro-environmental life values. In addition, the Fifth Schedule in the Constitution of India and the Panchayat (Extension to Scheduled Areas) Act (or PESA), 1996 provides for the tribal community’s rights on water and forest under the Khuntkatti System, as well as other traditional rights including Khatian of 1932, Khatian Part Two, Village Note, etc.

It is a well-known fact that special legal provisions have been made in the Indian Constitution to protect and develop forest land inhabited by the tribal communities as well as their socio-cultural and economic base. It has been clearly stated that the natural resources within and without the boundary of the village, such as gravel, soil, sand, shrubs, forest, land, rive and, springs, are community property of the village and all the villagers have community rights over the area.

All these community rights have got legal recognition under the CNT Act, SPT Act, PESA Act, Wilkinson Rule in Kolhan area and Right to Mundari Khuntkatti System. These rights were attained after a long struggle and martyrdom of thousands of tribal bravehearts including Tilka Manjhi, Sidvu, Kanhu, Phool-Jhano, Telanga Khadia, Sindrai Manki, Vindrai Manki, Bir Budvu Bhagat, Gaya Munda, Kanu Munda, Birsa Munda, Manki Munda and Jatra Tana Bhagat. The crucial role of the Adivasi communities in the independence struggle of the country against the British is etched in history.

Even post-independence, tribal communities have been continually struggling against encroachment on their land, water, forest, language, culture as well as identity. To protect the forest and the land, tribal and indigenous communities rose above caste, religion and politics, to mobilise successful mass movements like the Kendriya Jan Sangharsh Samiti’s 45-year-long struggle to avert displacement of 256 villages in the Palamu-Gumla region and the Koel Karo people’s movement going on for 40 years to oppose a hydel project which caused 245 villages to be uprooted owing to the construction of a dam on Koel and Karo rivers.

With the formation of Jharkhand as a separate state on November 15, 2000, the then BJP government started inviting leading investors to the state. During the next four years, the government signed MoUs with more than 150 companies. That’s when the tribal and indigenous communities rose against it as an organised power. In Khunti-Gumla district, when steel giant ArcelorMittal proposed to set up a steel plant by displacing around 40 villages, the indigenous farmers of the area resisted with the slogan – ‘We will not part with even an inch of land’. The protests against Bhushan Steel and Jindal Steel in East Singhbhum and against land acquisition by a coal company in Kathikund area of ​​Dumka also yielded successful results.

What the Adivasi community has gained and lost during the last 75 years is a matter that needs to be assessed. Since independence, more than 22 lakh acres of forest land have been acquired for various projects in the name of development. For urbanisation, lakhs of acres of land is wrested from the tribal community every year. Lakhs of land owners in the state are now forced to work as daily-wage labourers. More than two crore tribal and indigenous people as well as Dalits have been displaced and left without a means of sustenance. In their own state, the tribal community has been reduced to a minority at 26.2%, which is expected to further slide down until the next census. Tribal areas have been neglected when it comes to development in the education and health sectors. The amount sanctioned under the tribal sub-plan is being diverted to other heads and the money has been used in the construction of jails, roads and airports. As a result, the tribal population is bearing the brunt of ‘development’.

Tribals living in different parts of the country, including Jharkhand, have also intensified the demand for the Sarna Adivasi Religion Code arguing that when Jains with an estimated population of 4,451,753 across the country, according to the 2011 census, can have a separate religious code, why can 104,281,034 nature-worshiping tribals living all over the country not have a separate religious code? Since the formation of Jharkhand, the tribal population has declined. In Jharkhand alone, the tribal population reduced by 30 lakhs as no one knows under which religion they were categorised. All the political parties of Jharkhand support the idea of Sarna Dharma Code, but none of them took any initiative to implement it during the past 17 years. With its implementation, the tribal community will find an identity and communalism in the name of religion among tribal communities will stop.

Also read: The Cross-Roads Indian Science Is Facing Have Changed in the Last 75 Years

After 2014, changes in constitutional policies related to public rights have attacked the rights of tribal, the indigenous, Dalit as well as hard-working labourer communities. Global policies, global capital and global markets have now replaced traditional rights of the community with corporate interests. The welfare government of the country is now giving priority to corporates. The Adivasi and indigenous communities have entered a new phase of struggle against these policy changes. Public politics in the country has been replaced by caste and religion, which has deeply impacted the tribal community.

Today, those who raise their voice for public concern, constitutional rights, human rights, forests and right to land, education and health are labelled as traitors and thrown behind bars by the ‘welfare’ government. In the present struggle, the tribal communities are faced with not one but thousands of challenges.

All laws like the Fifth Schedule, PESA Act, Forest Rights Act, CNT Act and SPT Act continue to exist on paper, but they have been rendered practically ineffective. The scheduled areas have been declared as backward areas. With land record digitisation, names of actual land owners are being replaced in land records and the land of tribals, farmers and Dalits is being forcibly seized and handed over to others. Under the Union government’s current ownership scheme, against the provision in the Fifth Schedule, Sixth Schedule, CNT Act, SPT Act, Mundari Khuntkatti System and Wilkinson Rule, that forest, water and land are community property, the rights of the villages over these resources are being steadily curbed and they are being seized by the government as its property. Soon, the traditional tribal village will completely disappear and their traditional system and authority will be completely destroyed. In the name of protecting a particular religion, mob lynching is being brazenly carried out. Religious fanaticism is being encouraged in the community in the name of stopping conversion.

Meanwhile, the community is being divided along caste and religion. Mass movements, federal structures of the country, and public institutions are being crushed. In such a situation, the only solution is for all the oppressed sections of the state as well as the country to unite on a single platform and bolster the organised movement of the oppressed communities. During the COVID-19 pandemic in 2020 and 2021, the country’s state machinery, political machinery, armed forces and diplomatic machinery remained a mute spectator as people suffered and lost lives. Despite having money, people died because the government failed to provide oxygen. We must never forget.

Together, we must endeavour to strengthen tribal communities which are the role model in preservation of water, forest and land, and learn from their connection with nature and the surrounding environment for the sake of the entire human race.

Dayamani Barla is a journalist and tribal rights activist from Jharkhand.