Apart from opposing the amendment due to its communal nature, critics must also realise that it is detrimental to the ecological and demographic balance of the Northeast. 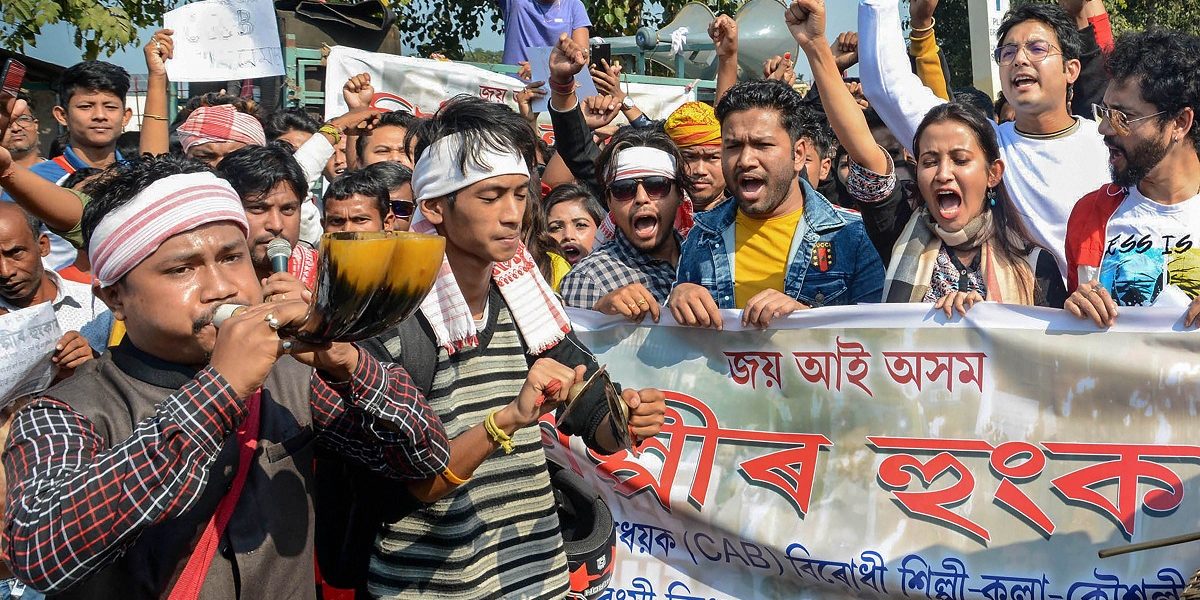 Assamese film artists take part in a protest during the strike against Citizenship Amendment Bill on December 10, 2019. Photo: PTI

New Delhi: One of the latest issues that citizens, bureaucrats and politicians of this country are debating, and which has garnered polarised and heated responses from people across ideological, moral and regional spectrums is the Citizenship (Amendment) Bill (CAB). The Bill, as the name suggests, seeks to amend the Citizenship Act of 1955, the law that lays out the rules of Indian citizenship.

The issue has garnered much-heated debate and protests from all over the Northeastern states, particularly Assam and Tripura. These states, with historical reasons and phases, have seen and witnessed the maximum pressure of immigration and the ecological, demographic and cultural changes that unfurled with immigration. Demands for indigenous rights, political representation, constitutional protection of land, livelihoods and culture of the ethnic minorities are historical realities of all the seven Northeastern states (Sikkim has been relatively much more settled and peaceful), particularly in Assam and Tripura, due to the unique historical trajectories of these two states in the post-colonial era.

Protests against the CAB since 2016, when the NDA government decided to place the Bill in parliament, have also naturally been most vehement, rigorous and violent in these two Northeastern states. CAB has been vociferously opposed by citizens and civil society groups, politicians from across the parties except for the BJP, as well as the ruling governments in most Northeastern states.

The current protests and opposition follow the 2016 protests. The proposed amendment has created an uproar across Assam. The Amendment Bill actually emphasises the grand Hindutva rhetoric of facilitating naturalised Citizenship to Hindus, Sikhs, Buddhists, Jains, Parsis and Christians from Bangladesh, Afghanistan and Pakistan. 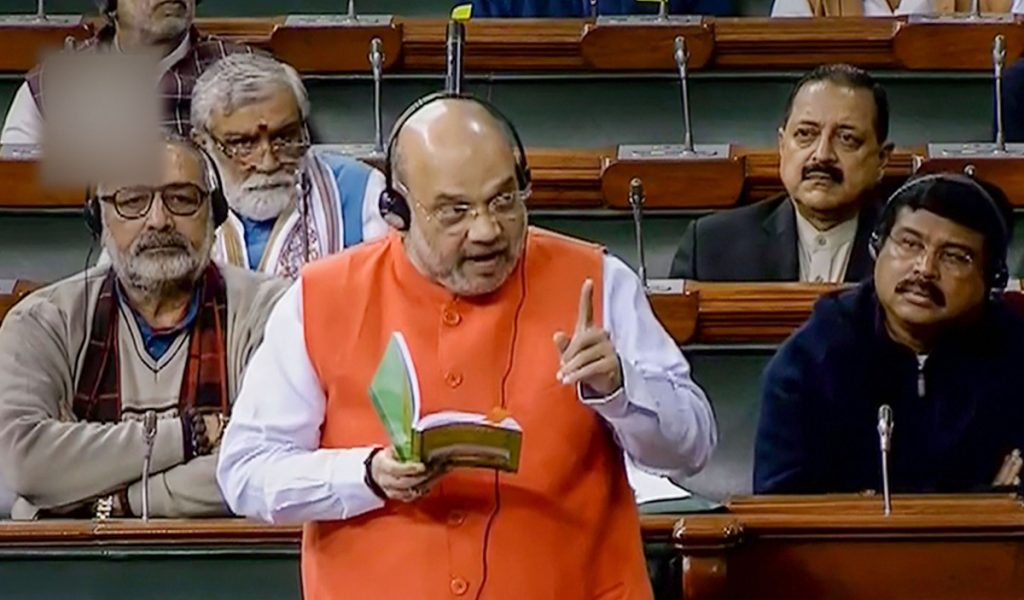 Because of the popular outcry against the Bill, the Union government decided to organise hearings by a Joint Parliamentary Committee. A 16-member Joint Parliamentary Committee, headed by BJP MP Rajendra Agrawal, made hearings at places in the Brahmaputra and the Barak Valley in Assam separately. The JPC hearing in Guwahati was attended by thousands of people and numerous organisations came vocally against the Bill and presented numerous memorandums presenting their opposition. Similarly, the JPC held two hearings in the Barak Valley, and reportedly the majority had supported the Bill. Arunabh Saikia’s report in Scroll says, ‘While the committee’s “study visit” to the Brahmaputra Valley was marked by vehement opposition to the bill, the two public hearings in the Barak Valley saw people turn up in large numbers to express their support for it.’

The 2016 turmoil calmed down when the Bill was vetoed successfully in the Rajya
Sabha by the Congress and other opposition parties, with support from parties like the JDU, who were members of the ruling NDA. However, the current Union cabinet has recently brought the issue up again. The draft CAB 2019 was cleared by the Union cabinet on December 4 was passed by the Lok Sabha on December 1o. The popular responses, nationally as well as in the Northeastern states, have been radically oppositional and vocal.

CAB rocked Assam simultaneously with the now completed process of updating the National Register of Citizens (NRC). The NRC, which has undoubtedly opened more fault lines in Assam than it solved, garnered incredible and unprecedented national and international media and public attention to the issues of identity, violence, marginalisation and the historical fault lines in the frontier of the post-colonial state. The CAB, simultaneously yet contrarily, has given rise to insecurities among the local and indigenous inhabitants, all sections of the populations in Assam and the Northeast. The two issues in Assam, although intricately connected in the sense that they are historical moments in state-making, identities, national and sub-national imaginations, resource and rights in the region, need to be seen uniquely. This essay looks only at the CAB vis-a-vis the popular opposition to it in Assam.

The narrative of the opposition to the CAB at the national level is that the bill challenges the Constitution of India, with provisions of granting citizenship on a religious basis. The Bill is perceived by the multitude of voices opposing it as a threat to the secular fabric of Indian society. The question that arises, then, is, what if the current cabinet suddenly removes the religious criteria for granting citizenship from the Bill? What if the government proposes that everyone who is persecuted in the neighbouring countries is welcome? That, hypothetically, solves all the problems that the opposing narrative is raising. The Bill, then, should be acceptable to everybody, at least on humanitarian grounds. However, the opposition to the CAB at the national level, somewhere, fails to understand that the CAB will also potentially disturb the fragile peace of the Northeast.

It needs to be injected into the mainstream discourse that even if the religious criteria is removed from the Bill, what will be its effect on the smaller communities of the Northeast, and whether that will need to conflicts on the ground. Importantly, the Bill violates the nation’ commitment to the people of Assam through the Assam Accord of 1985. Many political as well as non-political parties, from the so-called ‘mainstream’ All Assam Students’ Union (AASU) to parties conventionally understood to be representatives of the minority Muslims in Assam like the AAMSU and AIUDF have collectively voiced their opposition to the CAB, saying it violates the Assam Accord, and hence New Delhi’s word to a set of people. 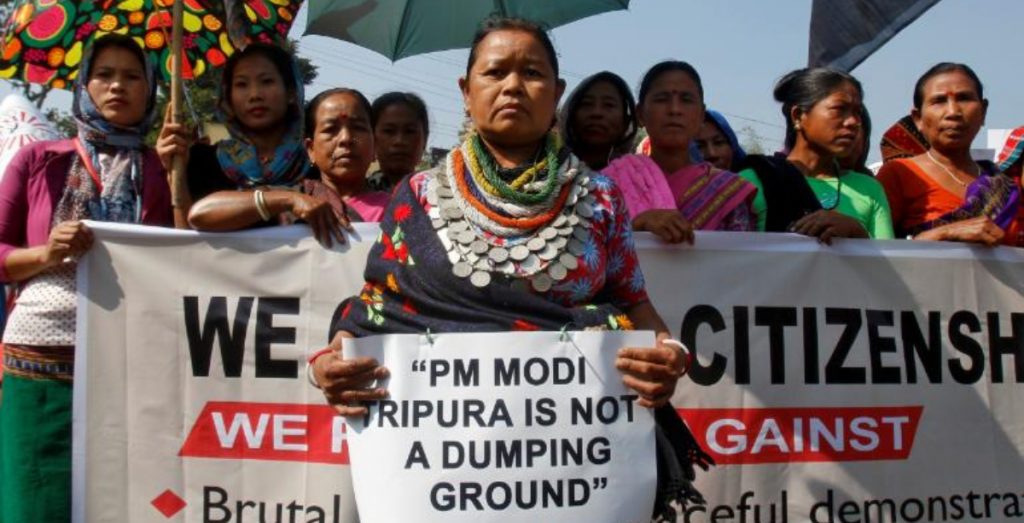 The Bill has also been repeatedly termed communal by common people in Assam, along with all the major groups and parties. The most recent anti-CAB agitations in the state have been spearheaded by the students of Cotton University under the leadership of the Cotton University Union Society. Their call for protest has garnered support, participation and solidarity from all over the state, and many distant corners.

The Bill has also been viewed as detrimental to the ecological and very intimately connected demographic balance of the region. Assam is undergoing a resource crisis, along with annual flood, erosion and deforestation. The popular argument against the Bill is that with the provision of welcoming and granting citizenship to persecuted religious minorities from many neighbouring countries, the ecological and demographic balance of the region is again potentially threatened.

The fear is that due to geographical proximity and other reasons, a lot of these refugees would settle down, or be settled with official measures, in the region. Apart from a threat to the volatile demographic balance in the province, with many ethnic minorities with really scanty numbers and traditional livelihood practices, the chief provision of the Bill threatens the ecological balance of the province too.

The hesitant assurance from the government that the Inner Line Permit areas in some states in the Northeast would be exempted from the obligations of the CAB has hardly convinced anybody in the region. Specifically, the CAB is perceived as detrimental to the plains tribes of Assam, whose areas are not protected. The land, which is affected by flood every year and loses its landmass annually, leading to landlessness to many, has already witnessed scarcity of land and other resources, and inter-ethnic conflicts resulting mainly out of issues of resource sharing. The CAB is popularly perceived to be a threat to the fragile ecological and demographic balance of the Northeastern region, and especially Assam.

The opposition to the Bill on the national level must not merely limit itself to the issues of the communal basis for granting citizenship and the othering of the Muslims, which are no doubt pertinent and crucial issues for the Indian ‘nation’. Apart from the concerns for the Constitution of the country, and the very secular fabric of the society, the circumstances and concerns of the indigenous people of the Northeastern states, who deem themselves to be potentially the most vulnerable to a government-sponsored influx of refugees on humanitarian grounds, must be taken into account too while voicing against the Bill.