“The past one year has been like hell for us,” says Farooq Ahmad Dar's ailing mother, adding “they have turned my son into a vegetable.” 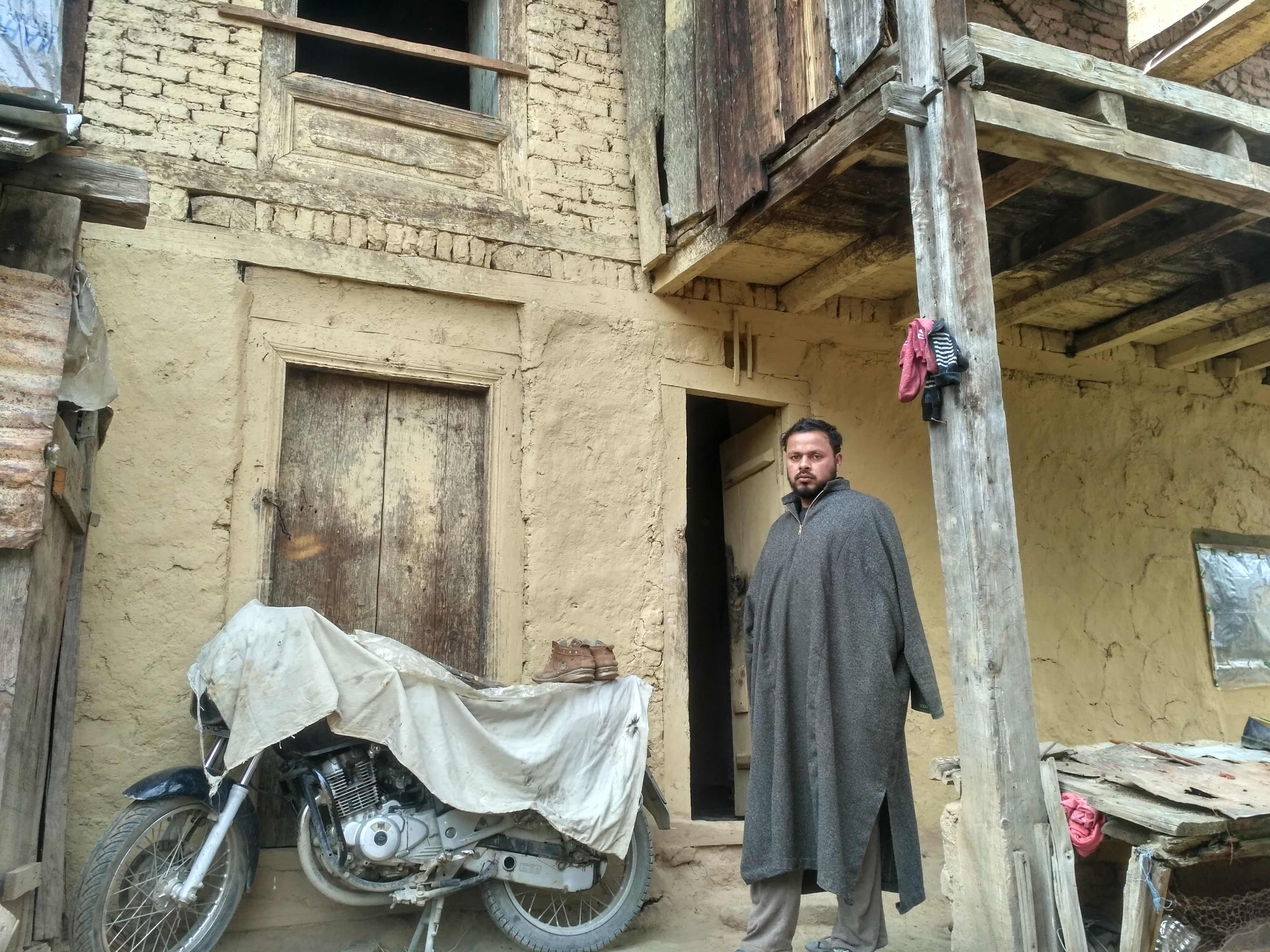 There is no scheme or policy in vogue in the state that covers the payment of compensation in the matter like the present case, says Farooq Dar, whose next hearing is on April 4. Credit: Majid Maqbool

Chill Brass, Budgam: Last year, on the morning of April 9, Farooq Ahmad Dar – a 27-year-old shawl weaver from Chill Brass village in central Kashmir’s Budgam district – had just cast his vote and was on his way to a neighbouring village to condole a relative’s death when he was asked to get off his Bajaj Pulsar bike. He had no idea that he’d be stopped midway by the army, tied in front of an army jeep, and then paraded for several hours through neighbouring villages.

Beaten up, his pheran torn, hands tied behind his back with ropes, Dar was forced to sit on the bonnet of the jeep by army personnel led by Major Leetul Gogoi of Indian Army’s 53 Rashtriya Rifles from Beerwah, Budgam camp. His bike was pushed aside, skidding off the hilly road. The army men then wrote “some warning message’’ on a piece of white paper, he recalls, which was pasted on his chest and tied with ropes around his ribs.

He was then driven through several villages for about six painful hours as he sat terrified and held the bonnet tightly. Between brief halts, his photos were taken. The whole act was meant to scare away potential protesters ahead who could clash with the patrolling army party, he says. The polling day of by-elections held last year recorded one of the lowest voter turnouts (7%) in Kashmir’s electoral history.

After sitting for a couple of hours on the jeep’s bonnet and driven around on the bumpy and curvy village roads in Budgam, the pain became unbearable for Dar. He’d given up hopes of coming out alive. He thought that day would be his last.

Later, a brief video of him tied in front of the army vehicle and passing by a village road emerged online, triggering widespread outrage. A warning message could also be heard in the short video clip that went viral on social media. A message blared from inside the army vehicle: “Aisa haal hoga pathhar walon ka, yeh haal hoga” (Those who pelt stones will meet the same fate).

About a year later, sitting in a small room of his three-room mud house, which was locked for more than six months following the incident, Dar still can’t come to terms with the fact that he survived that day. He also finds it hard to believe that he’s lived a year since the incident.

Dar considers himself – as he puts it – a year-old now. “I feel like April 9 is my new date of birth,” he says, sitting in his cramped room with some multi-coloured threads used for weaving shawls hanging on the wall. “Eight civilians were killed here that day,” he says, adding, “I could have been the 9th one… It’s a miracle that I’m alive today.”

Haunted by the incident which affected him both physically and psychologically, Dar is struggling to resume his normal life, but he is still unable to pick up the threads of his life before the incident took place. Only in the last few months has he been able to slowly get back to shawl weaving.

“It’s hard and painful to live with what was done to me,” he says. “I miss my earlier self… my life before that incident…,” he says. 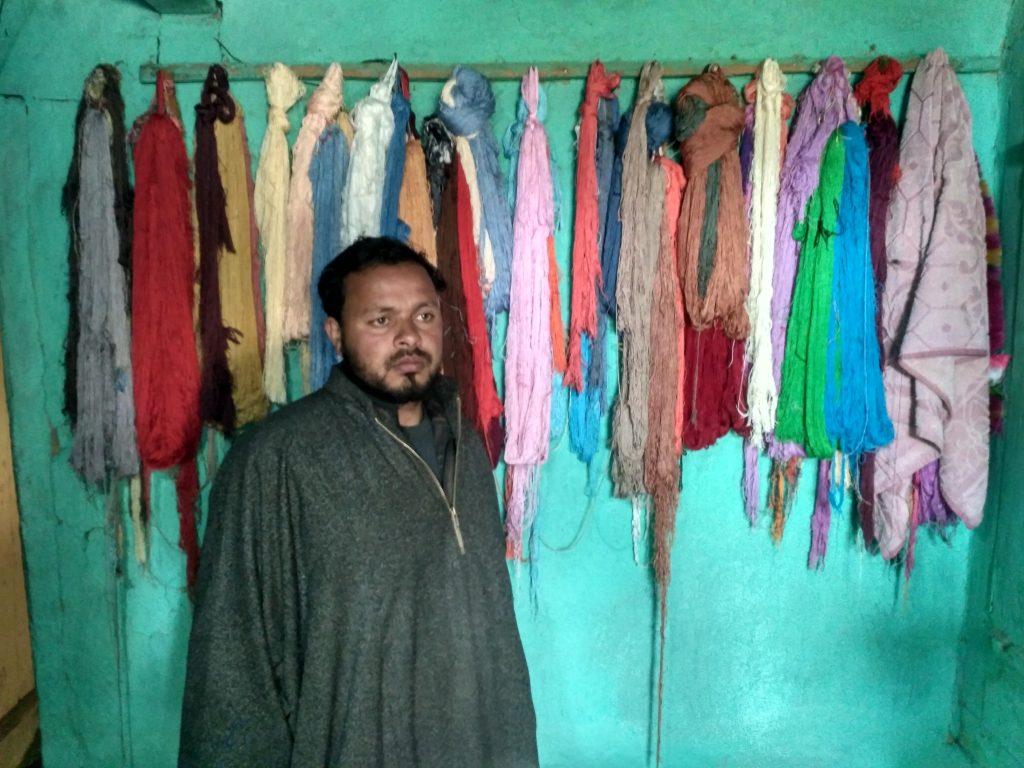 Colourful threads hang on the wall of Dar’s cramped room. He says his earnings from weaving shawls has dipped as the pain in his left arm hasn’t subsided. Credit: Majid Maqbool

Before that morning, Dar lived a modest, quiet life, earning about Rs 3,000 a month, weaving shawls at home. Despite the meagre earnings, he says he was happy living with his old mother, earning enough to feed his small family of two.

After the incident, as his health began to fail, he spent months struggling to get proper sleep. The pain in his left arm refuses to subside and has troubled him for several months last year. He is unable to work at a stretch for more than a few hours.

Dar says now he barely earns Rs 1,000 a month, as he can’t work longer hours. He can’t sit still for long, feels restless and is unable to focus much on work.

“I’m still in pain,” he says, showing strips of prescribed medicines in his pheran pocket which he is supposed to take twice a day. “My body is swollen and I take medicine for heart ailment as well,” he adds.

Even now, whenever Dar sees an army vehicle on the road or going past his house, the April 9 incident flashes in front of his eyes. He says he sometimes wakes up in the middle of the night sweating, as he often gets nightmares. “I can’t sleep the way I used to before the incident”, he adds.

Until December last year, along with his ailing mother, Dar stayed away from his house, spending months at his brother and sister’s place in a neighbouring village. He was scared that something would happen to him again.

It pains him now when people say that he’s received compensation of Rs 10 lakh, recommended by the State Human Rights Commission (SHRC), in its earlier report to the state government. “I didn’t get any compensation, but some people here say that I’ve taken Rs 10 lakh,” he says, adding that he’s offended by this talk. “I’ve not even taken Rs 10.”

Three months after the incident, Dar managed to get back his bike from the local police station. His Samsung smartphone, which was taken away from him that morning before he was tied in front of the army vehicle, is still in the army’s possession.

Despite being a voter and also having voted that morning, Dar says no one from the government – official, minister or local MLA – has bothered to visit his home after the incident hit the headlines and his ordeal became known. No NGO came forward to extend help either or provide legal support to fight the case, he points out, except for his relatives and people from his village who came forward to sympathise with him. The SHRC took up his case though, having recently handled it over to the high court after the state government turned down its recommendation to compensate Dar.

“There is no scheme or policy in vogue in the state that covers payment of compensation in a matter like the present case. Also, the commission is handicapped in going into the conduct of the army,” the government said in its report to SHRC.

Had that few seconds-long video somehow not surfaced online, Dar says no one would have believed him – and no one would have known what was done to him. “Initially, they even tried to say that the video was not from Kashmir. But the reality soon came out in that video for all people to see,” he says.

Fazi Begum, Dar’s mother, is a heart patient. She laments that her son can’t work properly as his health has since deteriorated. She is thankful though that he survived that day. Now she doesn’t let him go out of her sight for long. She is always worried about him, especially when he leaves home. “My heart is weak. I can’t see him in pain,” she says, adding that “his tummy and face are swelling.” 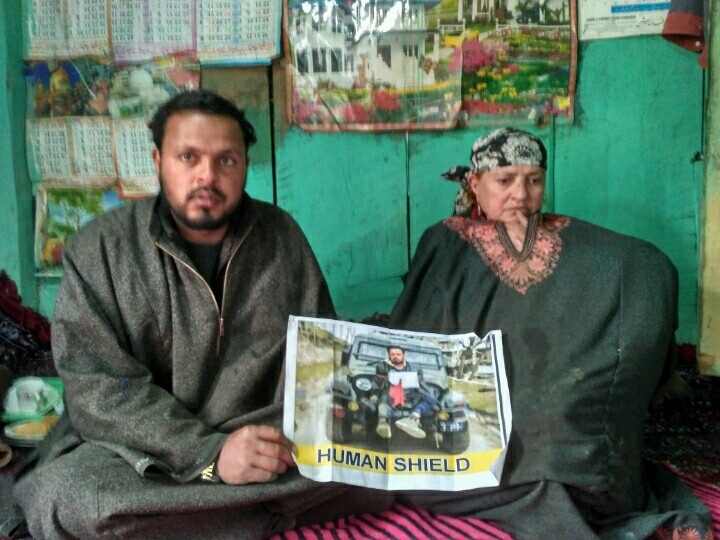 The mother and son have preserved the front page of a local daily a day after his ordeal hit the headlines, with his photo captioned ‘HUMAN SHIELD’. Credit: Majid Maqbool.

“The past one year has been like hell for us,” she goes on, her eyes brimming with tears while looking at her son, adding “they have turned my son into a vegetable…”

Before the incident, she’d begun to look for a suitable match for Dar, her third and youngest son, hoping that he’d marry soon. But the incident also affected his marriage prospects. “Now some families come to inquire here and after seeing his condition and that of our house, I never hear back from them,” she says, disappointed over the delay in his marriage. “Allah knows when he will be married now…”

More than the compensation, Dar wants justice, which he is still awaiting. The next hearing of his case is on April 4.

He says the army men led by Major Gogoi who tied him in front of the army jeep should be booked for the inhuman act and the subsequent pain inflicted on him and his mother. “But instead of bringing them to book, you saw how the Indian media projected that army major as a hero,” he says in disbelief. “There can’t be a bigger joke than that.”

Dar says the unforgettable incident will stay with him – and haunt him – for the rest of his life. “Every single day I relive the horrors of that day,” he says, pulling down a large printout of his photo which he has hung on a wall in his room. Cut out from the front page of a local daily a day after his ordeal hit the headlines, the photo shows him helplessly tied in front of the army jeep. Below his picture is written in capital letters: “HUMAN SHIELD.”

“If there is still no justice,” Dar says after a brief pause, gathering his thoughts while holding the photo in his hands, “then there is nothing left…”