Odisha’s Niyamgiri Hills – and Its People – Are Still Under Threat

Vedanta’s alumina refinery in Lanjigarh village is creating water and air pollution concerns, damaging both the ecology and people's health. 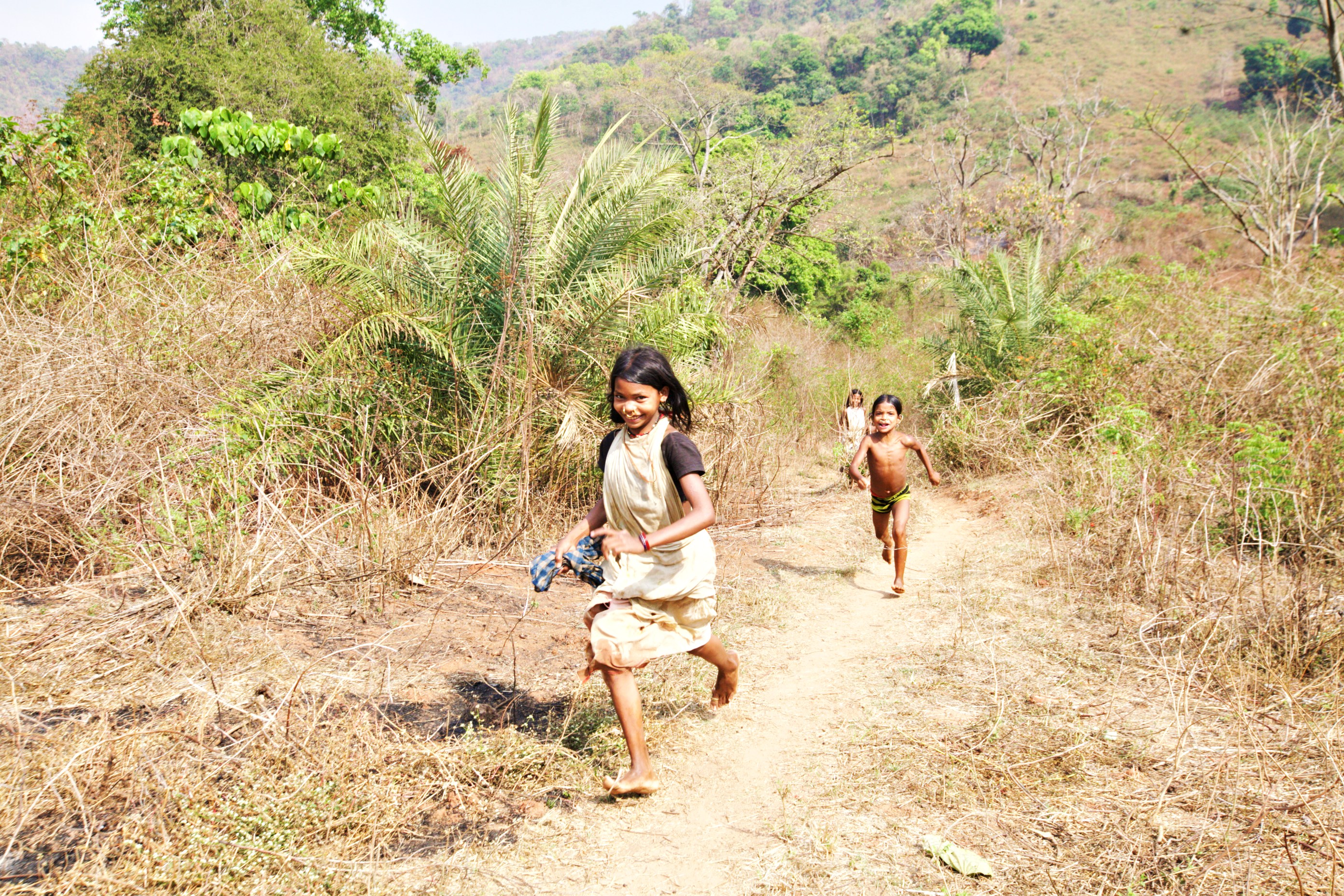 On April 18, 2013, the Supreme Court had held that village councils, or gram sabhas, will decide if the state-owned Odisha Mining Corporation could mine the Niyamgiri hills for bauxite. The mineral was to be used in Vedanta’s alumina refinery in Lanjigarh village. The hills reportedly contain 80 million tonnes of bauxite, much of it in a mountain that local Kondh tribes (Dongria and Kutia) worship as their deity, Niyam Raja. In the months that followed the Supreme Court order, all 12 gram sabhas where the referendum was held (out of 112 villages) voted against mining.

The Forest Rights Act (FRA), 2006 allows Scheduled Tribes and other forest dwellers to protect and manage their forests (community forest resource rights) as well as gives them the right to cultivate forest land (individual forest rights), collect and dispose of minor forest produce other than timber and use grazing land and water bodies (community forest rights). Under the FRA, no construction or mining can be done in the forests without the approval of gram sabhas.

Behind this unlikely victory of the tribals and Dalits, among other forest-dwellers, was a global media campaign that led to numerous Vedanta investors selling their stakes in the company. In 2010, the Church of England became the first major investor to sell its $5.9 million share.

By August 2013, the last gram sabha had voted against mining, and by January 2014, the environment ministry issued a ban on mining in Niyamgiri. 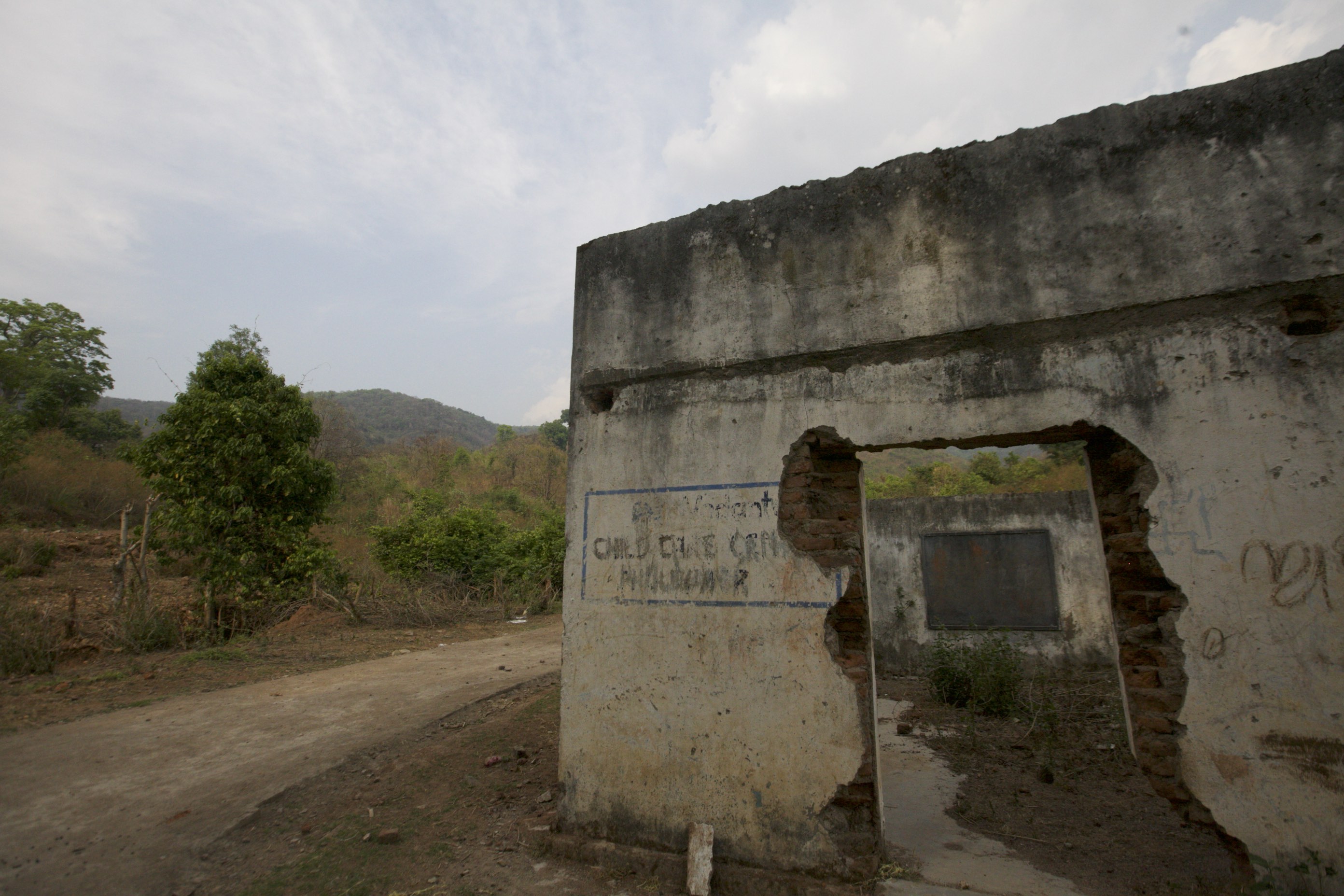 However, unaffected by the mining ban, Vedanta’s Lanjigarh refinery, which has been functioning since 2005 to the north of Niyamraja mountain, continues to extract aluminium oxide from bauxite brought from mines in Gujarat, Chhattisgarh and Guinea in Africa.

Bringing Vedanta considerable cheer, in January 2018, the Odisha Mining Corporation decided to supply more bauxite to Vedanta from its newly-opened Kodingamali mines in Koraput district. This will help Vedanta increase its production at the Lanjigarh refinery, which presently stands at only 50% of the installed capacity of two million tonnes of alumina.

Ecological degradation despite ban on mining

On a recent afternoon in April 2018, workers could be seen toiling in a shallow reservoir, part of a yard that is used to store ‘red mud’, a waste-product of the alumina refinery in Lanjigarh. A narrow embankment cuts through the yard, which is roughly the size of four football fields, and is used as a road for trucks to carry toxic waste from the refinery. The reservoir is to store the red toxic mud where it is mixed with water till it evaporates, and the waste is known as red mud in industry parlance. Workers here earn Rs 200 a day for this substantially hazardous work, and are not given any protective gear by the UK-based mining giant.

Less than a kilometre away, the alumina plant and its chimneys expel more toxins, including sulphur dioxide, nitrogen oxides, and PM 10 and PM 2.5, along with carbon dioxide into the air.

Red mud powder is a highly alkaline by-product of the process of extraction of aluminium oxide or alumina from bauxite or raw aluminium ore. Though it contains valuable minerals like iron and titanium, they are not extracted because of the economic unviability of the process. Another limited use of red mud is as a pigment in making bricks and concrete, but that too is not considered an efficient way to dispose of it. Thus, this red waste is eventually buried in the ground or dumped in the sea.

In the case of the Lanjigarh refinery, more than 50 million tonnes of toxic red mud is either already buried or is being stacked to be buried in the ground. Residents of villages around Lanjigarh have been complaining of skin problems and difficulties in breathing since then. Amnesty International first documented the health risks to human beings exposed to the air, water and soil pollution caused by the refinery.

According to estimates, extraction of each tonne of alumina produces anywhere between 300 quintals and two tonnes of red mud, or even more. Last year, the Lanjigarh refinery produced 1.2 million tonnes of alumina. 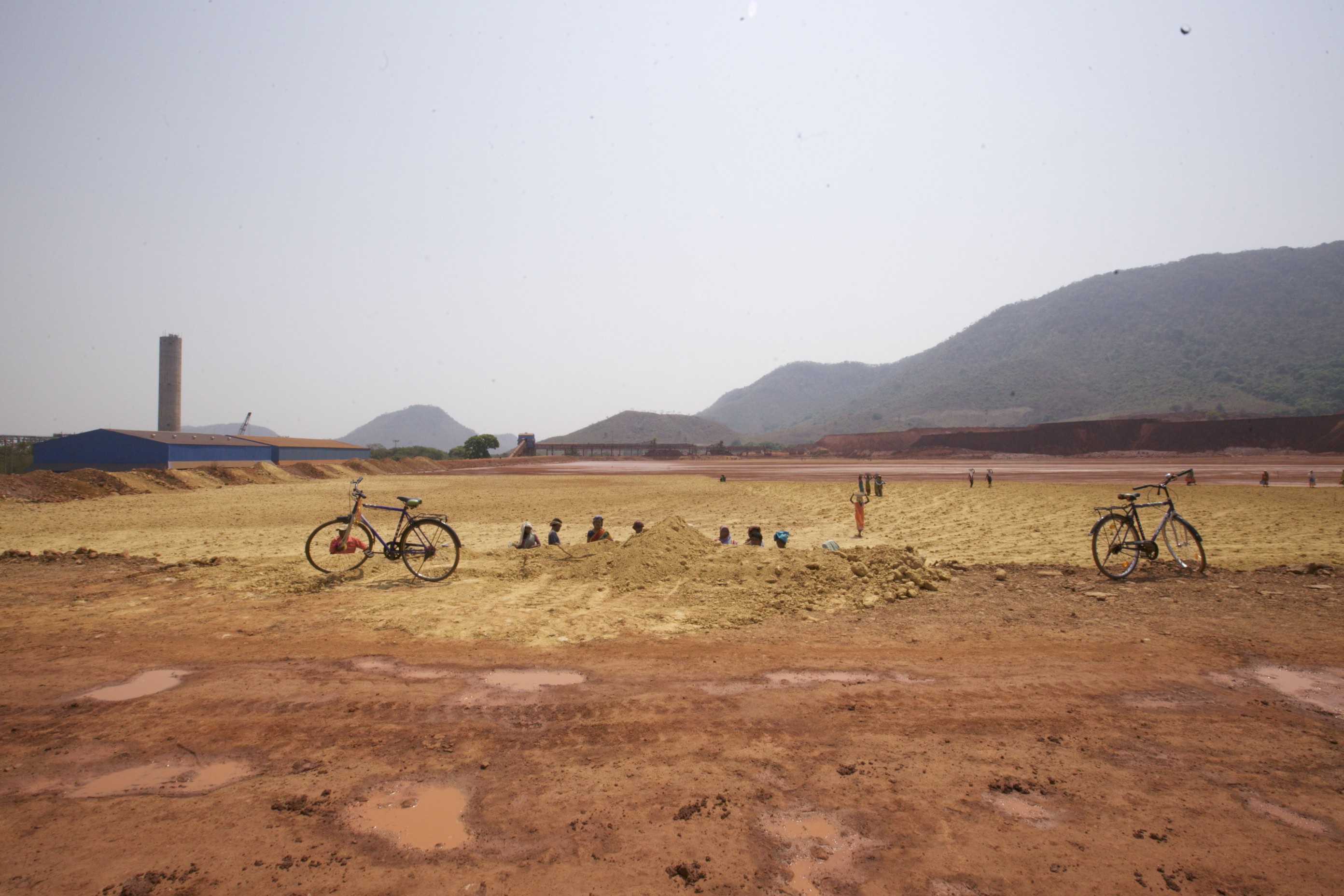 Vedanta claims to use a highly advanced red mud disposal mechanism, which it says negates completely the risk of contamination of the area’s water and air. In the last publicly available compliance report filed by the company (April 2017-September 2017), it says that red mud slurry “is being discharged through High Concentration Slurry Disposal (HCSD) technology…” and “is further processed with High Pressure Membrane Filtration Technology…for dry stacking of red mud having 80% solids which eliminates completely the wet storage of red mud”.

During monsoon rains, the red powder becomes slurry, even breaching the yard to seep through the ground and contaminate local water bodies that eventually join the Vamsadhara river, a lifeline for millions of people in Odisha and downstream Andhra.

As awareness about its harmful effects spreads, the vast amount of red mud powder being stacked in Lanjigarh is becoming a growing concern. However, many locals think of it as just ‘red dust’ and don’t fully grasp the damage it causes to humans as well as plants, trees, soil fertility and groundwater sources. Prafulla Samantara, who spearheaded the protests against mining in Niyamgiri, sees the refinery as a growing threat to the region’s ecological security. “The struggle to save Niyamgiri hills and the people who live in them continues as the pollution by the refinery is having a serious destructive impact on the environment,” Samantara said.

His appeal against the environmental clearance, dated November 20, 2015, for the expansion of the refinery’s capacity from 1 MTPA to 4 MTPA is pending in the Kolkata branch of the National Green Tribunal (NGT). The NGT bench in Kolkata has been unable to progress on his plea owing to the severe shortage of funds and judicial members.

Besides the fear of increased pollution and the destruction of local ecology, locals also oppose the expansion of the refinery as they fear that eventually the state and Central governments will again try to allow bauxite mining in the Niyamgiri hills.

They have a good reason to be afraid. In 2016, the Odisha Mining Corporation had unsuccessfully tried to get the Supreme Court to review the gram sabhas’ 2013 decision to ban mining. 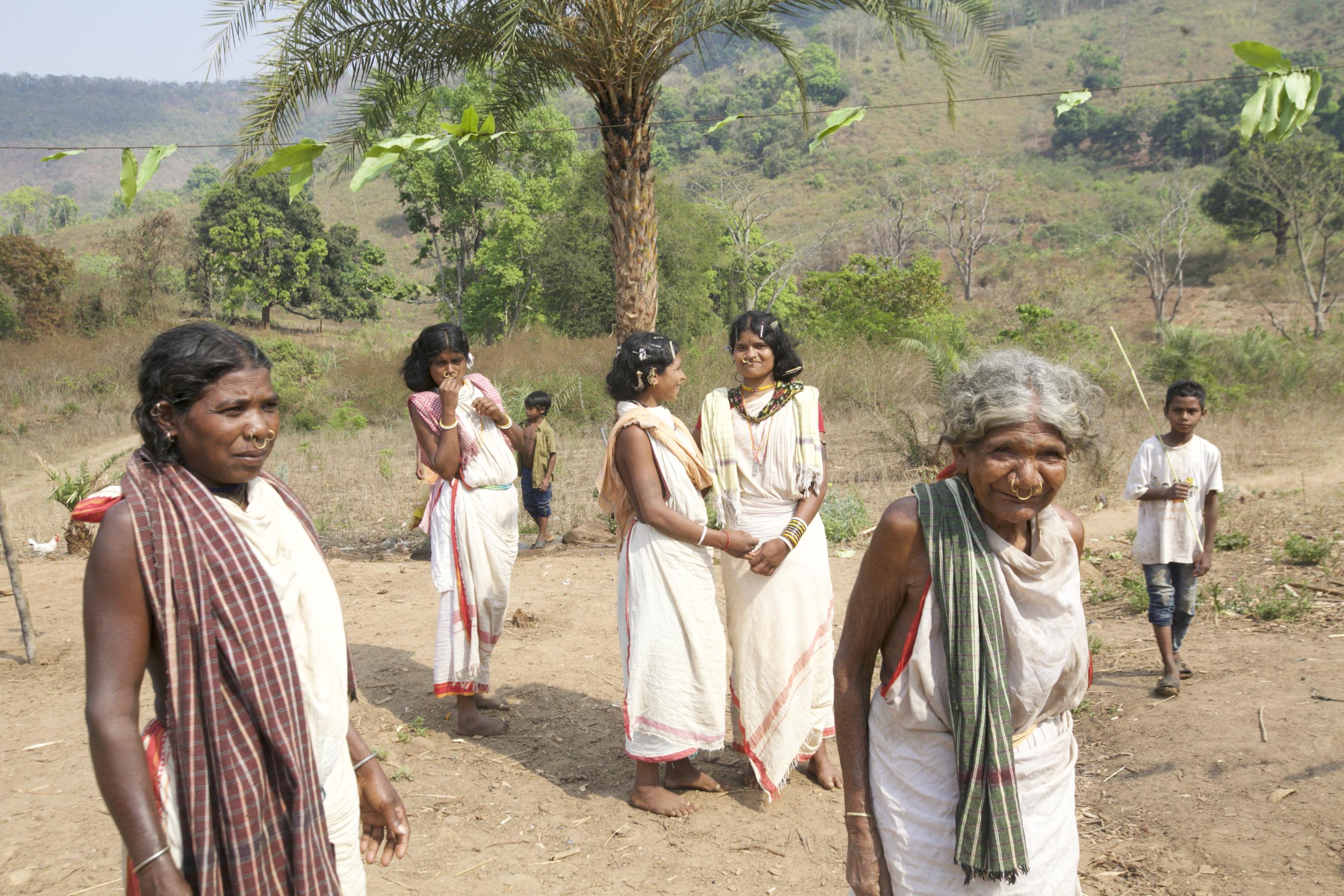 Women and children in Lakhapadar.

Less than 15 km from the refinery in Lanjigarh, Dongria Kondh tribals of Lakhpadar village live an increasingly besieged life. Every week some of them walk to the nearby villages and towns like Muniguda to sell forest produce such as jackfruit, herbs, tendu and other wild fruits. In the last couple of years, these regular hikes to local markets have meant risking being picked up or questioned by the CRPF and Odisha’s anti-Maoist troops.

Last year, the Union home ministry reported that the Niyamgiri Surakhsha Samiti was a front organisation of the banned Communist Party of India (Maoist). Upendra Bagh of the Samiti says that tribals involved with the group have been specifically targeted by the government to break their resolve to resist the refinery’s expansion, and any proposed plans to review the ban on mining. According to Bagh, arbitrary arrests on ‘false charges’ began less than two years after Niyamgiri tribals rejected proposed mining in their hills.

In 2015, a 60-year-old leader of the Niyamgiri Suraksha Samiti was arrested on charges of rape. In 2016, Dasharu Kadraka, a local tribal activist, was labelled a militia commander and arrested. Another tribal man, Manda Kadraka, was killed in a police encounter. He was later charged with being at a Maoist camp when he was shot. In May 2017, a 20-year-old tribal woman, Kuni Sikaka, was taken away by the Rayagada police from her home in Gorta village. Later, she and her family members were paraded as Maoists before the media.

Incidents like these have made the tribals even more wary of any government outreach. They remain suspicious of the state government as well as the Central government, which, they believe do not care for their well-being.

Lada Sikaka, a leader of Dongria Kondhs and president of the Niyamgiri Suraksha Samiti, lives in Lakhpadar, a village nestled in the forest. According to him, “The tribals are getting squished like mud between toes”, with Maoists on one side and the CRPF and state troops on the other.

“We were not Maoists before, we are not Maoists now and we won’t be in the future. Ours is a peaceful and constitutional struggle, these are the government’s attempts to discredit us and break our struggle,” Sikaka says.

The conclusion that the tribals and Dalits of Niyamgiri are being punished for opposing the state government is hard to avoid. Although some villages in the vicinity of Lanjigarh have benefited by getting pakka roads, Vedanta-run anganwadi centres, petty employment opportunities and a Vedanta-run hospital, many villages in and around the hills remain cut-off from basic amenities. The seemingly deliberate neglect of Kondh tribes and other forest-dwellers has led to a rise in Maoist forays in the region. The threat of being branded a Maoist and put behind bars is having a demoralising effect on Niyamgiri tribals’ resolve to demand a development model that suits their needs and respects their way of life.

“It is being said that we are against development. For us, the ecology of Niyamgiri comes foremost. We want to preserve its forests, rivers and trees. But we equally want education in our own language, health centres and government support to market our forest-based products,” Sikaka says as a couple of other onlookers voice their agreement. “We get everything we need from the forest, we don’t want roads if that means the company will be allowed to mine here.” 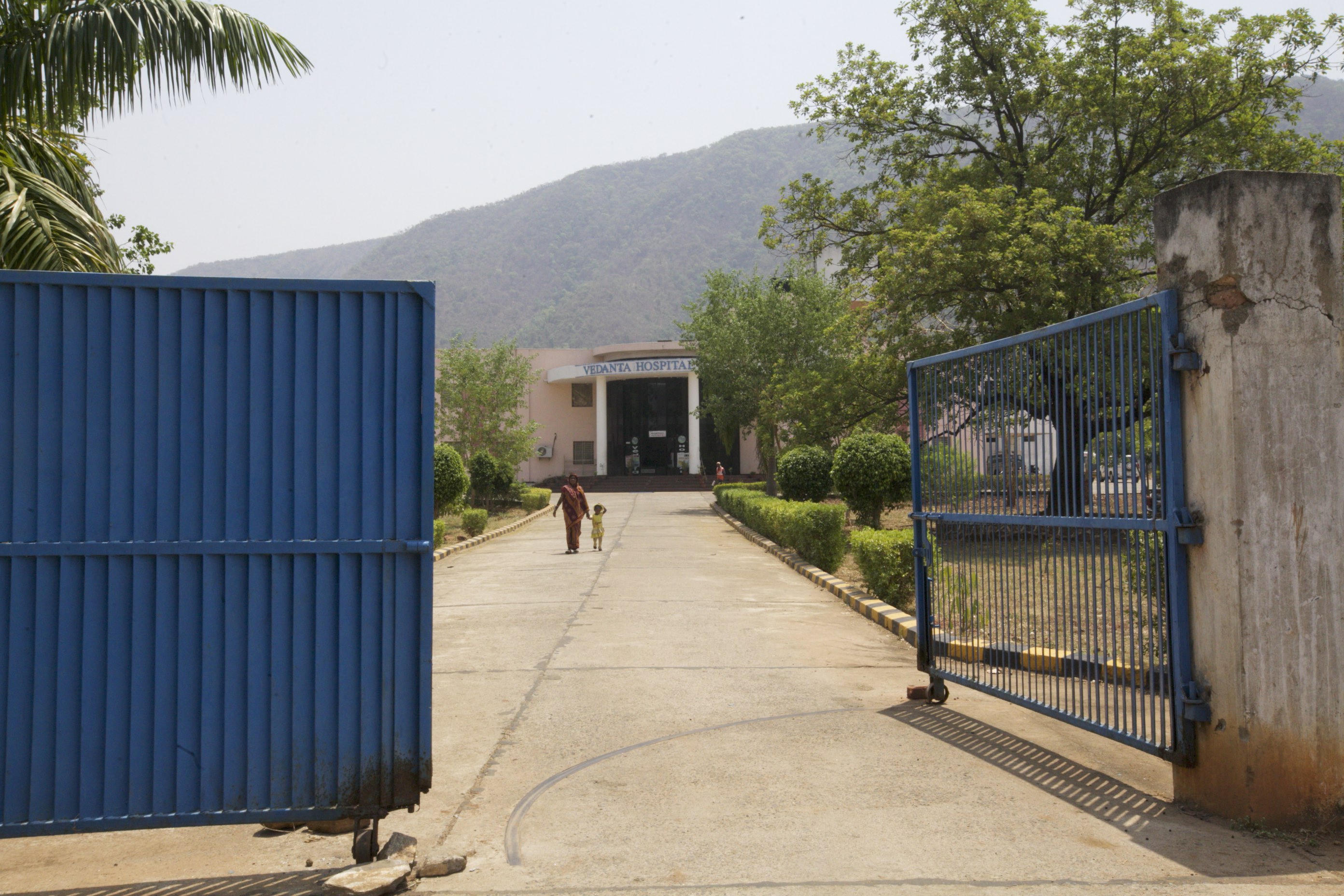 While walking on the sunbaked forest track that led to our jeep, the peril that Sikaka and others face is clear. Besides the risk of the dissolution of people’s resistance over time, the prevailing consensus among India’s ruling elite over what development means poses the biggest threats to the Niyamgiri hills and the people who live in them. With the unabated degradation of air and water quality, the risk that the forests might start dying is frighteningly real. What is worse and equally plausible is that if there is a renewed and successful push to remove the ban on mining, the death of forests and the extinction of Kondhs will come sooner rather than later – they can’t survive without each other.

Repeated queries to Vedanta for a comment this story got no response.

All photos by Valay Singh.

Valay Singh is a Delhi-based writer and photographer. He tweets @gaonwalah.