Women who are central to the Bonda economy, say that they cannot harvest forest produce and the local haats are closed. The lockdown has jeopardised not only their livelihoods but food and nutritional security as well. 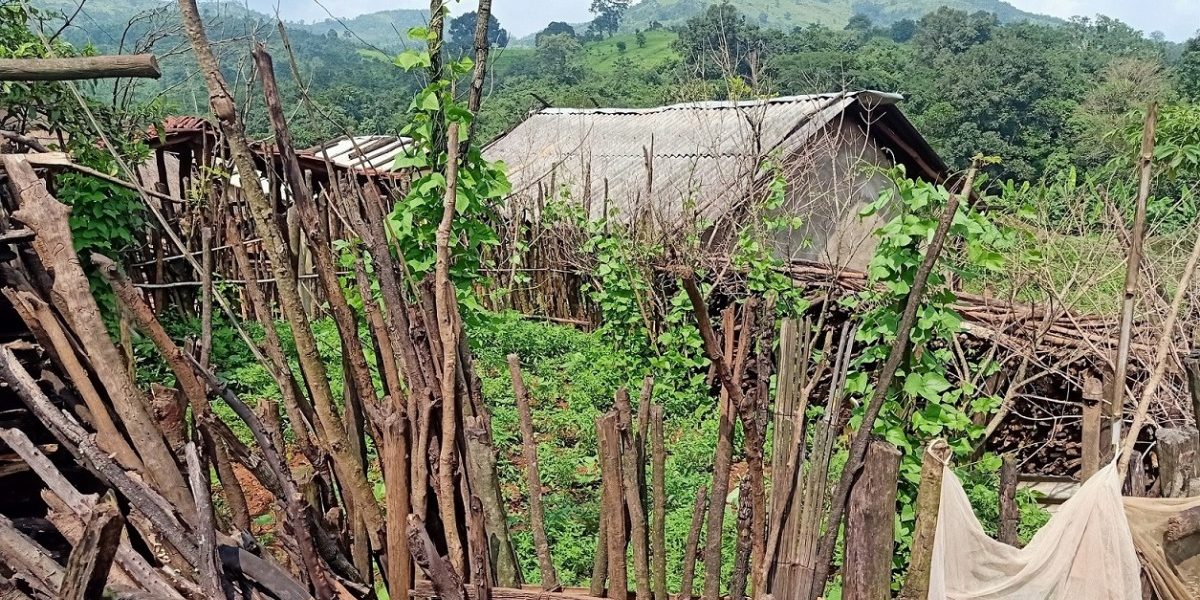 Bondaghati (Odisha): Perched on the southern edge of Odisha, in Malkangiri district, is the forested hill region of Bondaghati, home to one of the 13 Particularly Vulnerable Tribal Groups (PVTGs) in the state, namely the Bonda. They are believed to be part of the first wave of migration out of Africa, about 60,000 years ago.

The undulating tar road that goes through forests and hills gives way to multiple footpaths as you near Khairput block where the Bonda villages, marked by thatch and clay tile huts, are situated.

The Bondas, who have had an intimate connection with the forest and the sustainable life it signified, have been affected by deforestation and changes in traditional farming practices for some time now. Collecting minor forest produce (MFP) partly for their use and partly for sale at the weekly haat is what has given them some cash income.

Due to their remote habitat, buyers or traders hardly visit Bonda villages to procure their harvested MFP. Therefore, it is at the local haats that most Bonda women sell their harvests.

Some of the major forest produce they harvest for income generation, includes hill brooms; the siyali leaf, used for making plates; siyali seeds; siyali bark, used to make rope; and salap, a kind of mild alcoholic juice harvested from the salap tree mostly found in Bondaghati. Most of these products are perishable except for siyali bark which is mainly used to make rope. Berry varieties such as sindhikoli and chotodimbri are also harvested. They too are highly perishable.

The unprecedented situation brought upon by an extended lockdown has jeopardised the livelihoods, food and nutritional security of around 12,000 Bondas who live in 32 villages covering an area of around 130 square km, in Khairput block, as per the 2011 Census. According to tribal rights activists, “In the absence of urgent and pragmatic action by the state government, the situation can further worsen.”

Over the years, the Bondas have been seeing the yield from subsistence agriculture reducing. Subsequently, the income generated from selling surplus agro-produce has also reduced. Bonda women brew traditional liquor from millets, rice and jackfruit, selling it at the local haats, which provides them a steady flow of cash all year round. MFP and traditional liquor are critical sources of income generation for these communities – and both activities are out of bounds for them due to the lockdown.

Whether it is working on land, collecting MFP, or selling it in haats, women are central to the Bonda economy. It is they who talk about the impact of the lockdown on their existence. “It [the lockdown] has disrupted our lives,” exclaims 38-year-old Budai Sisa, who is from Kirsanipada village. She is having brown rice with panijhol, a kind of soup prepared with water, turmeric powder and salt.

“We don’t have money in hand and the haats are not open. It is difficult to sell our products,” she says.

In Khairput block, the local weekly haats at Amliput, Mundiguda, Khairput, Kudummulugumma and Govindpally have been closed down by the Malkangiri district administration in a bid to contain the spread of the novel coronavirus. The authorities have not indicated when the haats will open.

Chhanki Kirsani, 33, from Badapada village, voices similar woes. “It is just not possible for us to go to urban areas to sell our products. The haat is our best option. We sell our products there and we buy what we need. Also, things are cheaper here,“ she says.

Sombari Dora, 47, who is from Bondapada village, wants us to listen to her story. “We have been living in Bondaghati for generations. The forest is our home. We harvest fruits, mushrooms, hill brooms and medicinal herbs from the forest. We keep some for our use and sell the rest at the local haats. With the money from our sales we buy oil, cereals, salt, vegetables, kerosene and livestock. The money is needed to fulfil various needs of the family as well,” she explains.

The travails of the three women mirror the struggles of hundreds of Bonda women who are finding it extremely difficult to cope with the unprecedented situations arising out of the extended lockdown.

Also read: Holding Hunger at Bay During Lockdown: Stories From Bengaluru and the Nilgiris

For the upper Bonda communities in particular, the impact of the closure of local haats has been catastrophic. “The local haat is the nerve centre of Bonda communities and the heart of their village economy,” says Sukesh Mridha, project coordinator with the Centre for Youth and Social Development, a non-profit organisation, in Malkangiri.

The haats are not significant for their economic aspect alone; they also provide a space for the reclusive Bonda people to communicate with each other, share ideas, news and information, Mridha explains. Experts claim that the upper Bonda are relatively more vulnerable due to their remote location, for healthcare facilities are inaccessible for them. There is only one government primary health centre (PHC) for all 32 Bonda villages. (Odisha has one sub-centre per 5,229 population, one PHC per 27,151 population, and one CHC per 92,760 population. These statistics are not promising, especially during a pandemic.)

“Non-linkage of Aadhar with ration cards have deprived the Bonda people of  PDS supplies, and some people have lost their cards, too,” says Sukla. In the case of many Bondas, the names on their ration cards are not exactly the same as in their Aadhar cards, and that prevents them from accessing the PDS.

“Although the state government has recently announced that every household will get PDS rations, even those who don’t have Aadhar cards, local authorities are not paying heed to it, says Sukla. However, those who have their PDS cards have received ration for three months from the government.

In order to address the bottlenecks in the PDS system, a Skype interaction was conducted on May 13, 2020, with Minister of Food Supplies and Consumer Welfare Co-operation, Ranendra Pratap Swain. The interaction was organised by Vasundhara, a not-for-profit organisation in Bhubaneswar, working with the indigenous communities on issues of lands rights, forest governance and livelihood development.

During the interaction, Y. Giri Rao, director, Vasundhara, expressed an apprehension that people might face food shortages after two months of receiving rations. His calculation was that two square meals per day would require approximately 15 kg of rice, and three months advance ration rice (15 kg) under PMGKY would support a person for two months at most. If the lockdown continues after the end of June, people would require support in the form of more rations, said Rao. The minister replied, “Based on the emerging situation, the ministry will take adequate steps.”

During the interaction, Rajkishor Mishra, director of Rupayan, an NGO working on food security issues in Odisha, and former State Advisor to the Supreme Court Commissioners on Right to Food, emphasised the key role of the sarpanch. He put forth the view that the sarpanch has the power of a collector.

Further, Mishra suggested that it would be a good idea if the department of Food Supplies and Consumer Welfare issued a detailed guideline to the sarpanches on their role, responsibilities and authority, to better manage the PDS in their respective areas. “The department should issue a guideline on the methodology for linking ration cards with Aadhar,” he said adding that during the COVID-19 crisis no one who was eligible should be excluded on grounds of non-linkage of ration cards and Aadhaar. 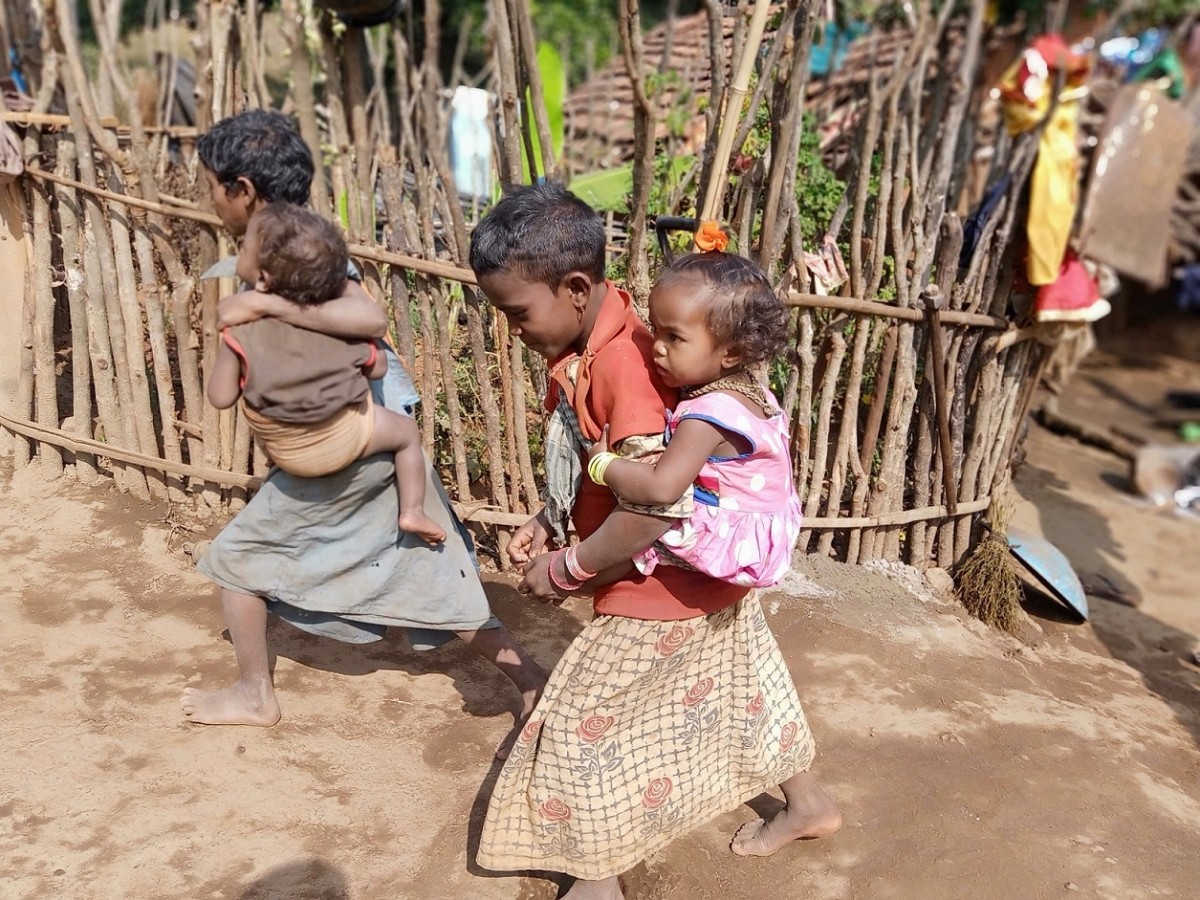 The issue of food and nutritional security

However, development practitioners from the region believe that accessing  PDS food supplies is not sufficient to holistically address the issues of food and nutritional securities among the Bonda people. “Their nutritional intake is far below the accepted standard,” says Rajesh Pattanayak, district project officer, Public Health Resource Society (PHRS), a not-for-profit organisation working with the Bonda and forest dwelling communities, on promoting food security and access to better healthcare services in Malkangiri.

Pattanayak has several reasons for holding this view. Since the Bondas depend on rain-fed agriculture, access to nutritional food in the off-season depends on the quantum of harvest and income raised from selling forest produce gathered mostly by women. Due to the variation in rain, temperature and soil moisture, the Bondas have consistently reported substantial yield reduction of their traditional crops such as millets, pulses and cereals lately.

Also read: In Gujarat, Tribal Evictions, State Repression in the Guise of Tourism

In fact, there has been a decline in the reliability of income from agricultural products as erosion of fertile top soil, drought, and the destruction of indigenous seeds from flash floods have reduced the number of crops that the Bonda people are usually able to grow.

Also, while the Bondas have traditionally cultivated vegetables in their backyards mostly meant for household consumption during the winter season, it is a challenge for them to get nutritive vegetables in the summer. Lack of access to irrigation makes vegetable cultivation impossible. The prolonged lockdown has worsened the situation for them.

Pattanayak is of the view that “the government should take a collaborative approach with the Bonda community leaders and elders, to implement land development initiatives.” He mentions that there is a need to prevent the disastrous impact of flash floods and promote preservation, cultivation, and multiplication of indigenous seeds. This will ensure long-term food and nutritional security among the Bonda communities, he feels.

A few relief initiatives during lockdown

Amidst the lockdown, some civil society organisations have come forward to address the issues of safety during the pandemic and food and nutritional insecurity among the Bonda people. For instance, PHRS, in collaboration with Azim Premji Philanthropic Initiative, distributed hand sanitisers and food supplies to 1139 Bonda households in 11 villages in the Mudulipada panchayat and two villages in the Andrahal panchayat.  “Our prime focus is to provide nutritionally rich food items,” says Pattanayak.

Apart from distributing food supplies, PHRS has also conducted several sensitisation programmes to educate the Bondas on the preventive measures to be followed during the pandemic. However, due to restrictions on travel to Bondaghati (announced on April 21, PHRS) has not been able to continue its outreach programmes. “The state government should urgently focus on nutritional food supplies to cover all the Bonda households under PDS,” says Pattanayak.

It is worth noting that the food grains provided through the PDS are different from the traditional dietary habits of the Bondas – this despite the state’s flagship millet mission. It is an aspect which requires consideration even in non-pandemic times.

As for the use of sanitisers, while there are supply and affordability concerns about their provision even in the short run, what is troubling is that the lack of PPE and sanitisation methods among the service providers themselves makes this isolated indigenous group more vulnerable to the virus.

Clearly, the pandemic and the lockdown induced by it has exposed long-standing issues regarding the nature of engagement that the state and civil society organisations need to have with the remote Bonda communities. Engagement cannot be a euphemism for one-way communication. It needs to be a conversation which pays heed to their voices and worldview and paves the way for interventions ensuring their livelihoods, food and nutritional security, and cultural confidence.

Abhijit Mohanty is a Delhi-based development professional and a freelance journalist. He has worked with the indigenous communities in India and Cameroon, especially on the issues of land, forest and water.