The activists had been protesting against their displacement by the state government and were demanding compensation promised to them by the National Committee for Scheduled Tribes. 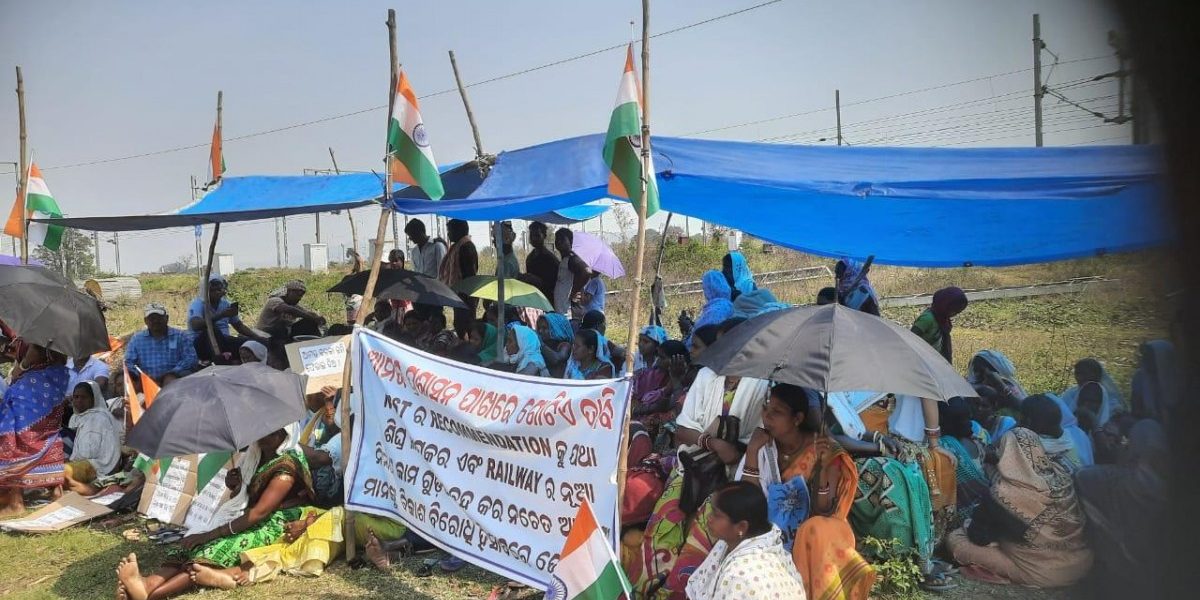 A picture of the protest site as included in the activists' statement.

New Delhi: The Bisra police on Monday, March 28, arrested 21 tribal activists in Odisha’s Rourkela for leading a protest of Adivasis displaced from in and around Bondamunda in the state’s Sundargarh district.

Among those arrested is activist Deme Oram who, alongside around 700 Adivasis and members of the Anchalik Surakshya Committee, has been on an indefinite dharna since March 16, protesting against their displacement and demanding justice as well as the implementation of various recommendations made by the National Commission for Scheduled Tribes (NCST).

The arrested activists were sent to 15-day custody at the Bisra police station, however, neither was a copy of the first information report (FIR) made available, nor were their whereabouts revealed initially.

The FIR, which is now available, has been registered under serious charges, including Indian Penal Code (IPC) Sections 147 (punishment for rioting), 148 (rioting, armed with a deadly weapon), 149 (unlawful assembly committed in prosecution of common object), 186 (punishment for obstructing a public servant in discharge of his public functions), 294 (obscene acts or songs in a public place), 307 (attempt to murder), among others.

A copy of the FIR by The Wire on Scribd

The police state that the arrests were made as the group illegally obstructed the construction of a road overbridge at the Kukuda gate in Bisra. However, a statement released in the support of activists claims that the arrests have been made to threaten and forcefully take over the tribals’ land.

“There is an attempt by the Odisha Government and Railway Authority to threaten the Adivasis with deployment of heavy police force to forcibly take possession of our lands,” the statement reads. “The land, about 4,000 acres in and around Bondamunda, was purportedly acquired in the years 1956-64 for setting up (a) marshalling yard in Bondamunda under the provisions of the Land Acquisition Act 1894.”

“The process of acquisition and the applicability of Act is in question,” the statement continues. “The government is not in possession of any details of the land, (which has not been) in its possession since then.”

The statement goes on to highlight that the tribal population in the region has been reiterating its long-standing demand for compensation and rehabilitation, however, these demands have been consistently ignored.

Speaking to The Wire, advocate Sonal Tiwary, who has been following the case closely, said, “An FIR has been registered against 200 unknown persons; that means an entire village which was protesting could be arrested at any point. The charges against the tribals are absolutely fabricated.”

“The Odisha government must intervene to ensure that the charges are dropped. The sections are extremely serious, including the ‘attempt to murder’ charge,” Tiwary continued.

“The case does not, however, amount to attempt to murder as there are two things in law: ‘intention’ and ‘attack’,” Tiwary said. “In this case, there is a clear absence of both from the side of the protestors and the charges appear to be entirely fabricated. The delay in the availability of the FIR (which is supposed to be made available within 24 hours) on the website also highlights that there is a targeted delay in the process of justice.”

Activists state that Oram had observed such police action and had apprised the NCST of the situation. Oram had also contacted Jual Oram, the MP from the Sundargarh constituency and had shared a solidarity appeal with civil society groups to take action.

After the issue of land acquisition for the marshalling yard, was raised with the NCST, the commission had made a field visit to the location in 2018. Based on the visit, it had issued an order saying, “In many villages, land displaced persons (LDP) are living in pathetic conditions where no facilities have been provided to them. Following are the 2018 recommendations from the NCST, which include the provision for allocation of five acres of unirrigated land and two acres of irrigated land to each of the displaced Adivasi families. Alongside, a stay in the eviction of tribals.”

A bail application for the activists had been sent to an Odisha court, however, it stood rejected as of March 31.