Swati Bidhan Baruah is spearheading the crusade for the inclusion of more than 20,000 transgender persons in the National Register of Citizens. The community has been left high and dry not just from everyday discrimination but also now, by the possibility of being labelled ‘foreigners’. Swati with members of the transgender community. Credit: All Assam Transgender Association

Guwahati: Swati Bidhan Baruah is a name to reckon with when it comes to the issue of fighting for the rights of the transgender community in Assam.

Baruah, who recently became the state’s first transgender judge in a Lok Adalat in the court of Kamrup (Metropolitan) District and Sessions Judge Court, is at the forefront of a legal crusade for the inclusion of more than 20,000 transgender persons in the National Register of Citizens (NRC), who are among the 40 lakh excluded from the final draft announced on July 30. The community has been left high and dry not just from everyday discrimination at the hands of society but also now by the possibility of being labelled ‘foreigners’. 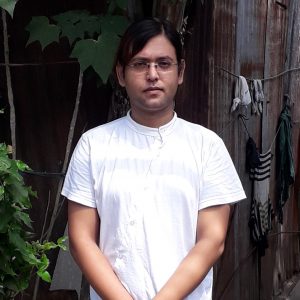 Swati at her home in Pandu Cabin. Credit: Gaurav Das

To highlight the possible implications of deprivation of citizenship, Baruah – who is also the founder of the All Assam Transgender Association (AATA) – filed an application with the Supreme Court seeking the apex court’s intervention on the issue. The petition was on the premise that if the finalisation of the NRC continues in its present form, the transgender community would be facing the threat of losing its citizenship. In a hearing of the petition on August 16, the SC sought a report (in sealed cover) from the NRC authorities on the district-wise percentage of the population that was left out of the final draft to better understand the issue. The bench of justices Ranjan Gogoi and R.F. Nariman asked the NRC state coordinator Prateek Hajela to place the data before it in the next hearing set for August 28.

In an interview with The Wire, Swati Bidhan Baruah said that not a single transgender person was featured in either the first or the second drafts.

“As the discrepancies began to come to light, we contacted the authorised persons [the Registrar General and the NRC state coordinator], and they assured us that by the last date of the publication of the final draft, they would be able to evolve some format to include the community so that we won’t be left out of the final NRC. They kept assuring us, but nothing has happened,” she said, adding that this was what led her organisation to go to the Supreme Court.

How large is the transgender community in Assam?

There are an estimated 20,000 transgender persons. But we expect that this number could be more as there are many more who are still closeted and have not come out due to fear of social exclusion and humiliation. If there is a trans-friendly environment and if they come out, I would say the figure could well cross the 20,000 mark.

Did any of them find their names in either the first or the final draft?

As far as I can say, there are none from the community whose names appeared in either of the drafts, which is why we are concerned. If the NRC authorities couldn’t do much or evolve any procedures to include the community, why did they in the first place keep assuring us ‘this’ and ‘that’ will be done for the community so that we will not be left out of the final draft? This is discrimination and that is why we have brought it to the notice of the Supreme Court which is monitoring the entire exercise. We hope that the apex court will take the matter seriously and guide the NRC authorities so that marginalised people don’t face the threat of being declared ‘foreigner’ someday.

Now that the NRC final draft has left out this group of people, do you, then, question the inclusiveness of the process?

The NRC authorities included the options of ticking male, female and others in the applications. So, we felt it was an inclusive process, but due to the absence of any specific mention of criteria to be followed for transgender people, the entire community was excluded from the final draft of NRC. The issue of transgender rights is comparatively a new subject for people, society and the state government. Still, the onus is on the state government to recognise these issues, but it has remained silent and is yet to implement the 2014 National Legal Services Authority (NALSA) judgement that recognises the fundamental and civil rights of transgender people.

What has primarily come in the way of transpersons’ names being included in the NRC?

What happens is that most are either abandoned at birth or disowned by their families later in life. Some start to feel differently from their ascribed gender identity. They leave their homes and start living with fellow transpeople. They live as families within their own community. What I mean to say is that most have no connection with their actual families and parental homes.

So, it is extremely difficult to establish their link with families and provide proof that they belong to families which have been living in Assam before March 25, 1971. For that, they need to connect with their families and obtain certain documents from them. With the familial connections snapped and many not welcome at their homes, any available chance of establishing that they are Indians and residents of Assam becomes difficult. It is like climbing a tall mountain, but the peak is already closed for them. They only have in their possession PAN cards and voter identity cards, which are not among the 14 documents approved by NRC authorities to prove their citizenship.

Knowing that the state government is yet to implement the NALSA judgement and with the NRC update process in full swing, you said you contacted the Registrar General of India and the NRC authorities about the apprehensions of the community in the initial phase.

Yes. As the discrepancies began to be noticed, we contacted the authorised persons (the RGI and the state coordinator) and they assured us that before the publication of the final draft, they would be able to evolve some format to include the community so that we won’t be left out of the final NRC. They kept assuring us, but nothing came of it. The BBC Radio Service also reported that the NRC authorities had said the transgender community contacted them and that they were in touch with the community. They have admitted as much. Since they assured us that it will be looked into before the publication of the final draft, we couldn’t have moved the Supreme Court. But when July 30 was only a week away, we felt that rather than for the final draft to be published, it would be apt to approach the Supreme Court. A writ petition was filed seeking its intervention on July 22.

Are you hopeful of getting a favourable judgement?

We are hopeful that a positive verdict will be given by the court.  It was the first institution in the country to recognise us and that is why we are expecting a favourable outcome again. The apex court should direct the state government to implement the NALSA judgement and evolve certain principles to update the NRC process in regard to the community. Our petition from AATA is based on the SC’s NALSA judgement.

To put things in perspective, what is the typical profile of transgender persons of Assam?

They are the children of this land. They are from caste Hindu Assamese communities and from the other indigenous communities. There is a considerable amount of trans-population in districts like Nagaon, Lakhimpur, Cachar, Kamrup (Metropolitan), Nalbari and Dhubri.

But I want to highlight that they have faced regular harassment – particularly those who resort to begging in trains, as the railway authorities corner them. They are regularly penalised and harassed. The Railway Police Force (RPF) needs to be sensitised while dealing with transgender persons. In Assam, the transgender culture came into the open only in the last ten to 15 years. Prior to this, many transgender persons from Assam, especially from the caste Hindu Assamese communities, went to Delhi, Odisha and Bihar. They settled with the local community there, but now things are changing slowly as sensitisation about the community is rolling in. Now that most of them have returned, they are finding great difficulty in retrieving their original documents and family legacy before 1971. Many families also deliberately shun them. This is one of the problems.

Is there any particular suggestion your organisation has worked out to address the issue?

We want to evolve certain principles. What we are trying to do is ask some of them who have left home at an early age to try and remember who their parents are or where they lived, the towns or villages, so that through proper government channels we can contact their families or relatives and get access to their legacy data.

Who among the transgender community are the most vulnerable and have a greater probability of being excluded from the NRC?

There are those transgender persons who have been abandoned by their parents at a very young age. Such persons have no idea who their parents are or where their original homes were. We are now mulling over what can be done about them. The NRC authorities would have to come up with certain principles which can address the issue. They shouldn’t be left out because that will be a huge violation of their human rights. We need to see how we can connect them to their family legacy.

Has there been any complaint of discrimination faced by the community at their local NRC Seva Kendra (NSK)?

When I took some members from our community to an NSK, some officials were dismissive, telling us to  ‘come later’ or that ‘they were busy’. They wouldn’t even talk to us properly. There were no separate camps or officers designated to address the queries of transgender people. It was quite discriminatory.

Was this discrimination you talk about directed more on religious lines?

I can’t say this for sure. I can say that when we talk about our people, we talk about the overall transgender population. When we filed the intervention petition, we talked about the transgender persons of Assam. We are not dividing the community on religious grounds. We are saying that the entire trans-population of the state should be included in the NRC. We do not have any divide and rule policy.

Does the community as a whole support the NRC process?

We do. If there are any unauthorised foreigners living in the state, they should not be part of the NRC. Because of undocumented immigrants, opportunities meant for genuine citizens of the state and its indigenous population might be affected. But the transgender population of Assam is not snatching away food from others. We are only saying that while protecting the rights of the indigenous people, this marginalised section should also be included in the NRC by following necessary principles.

Do you feel that the indigenous organisations supporting the NRC should have come forward on this issue?

The trans-population of Assam has always been the children of the land. But we have been overlooked, be it while updating the NRC or in other matters.

Are you getting the required support from local media in your fight to include the community in the final NRC?

The local media needs to be sensitised about theissue. In this case, I would say the national media is a lot more sensitive and has highlighted our case.