'There Is a Road Named After My Family. Is That Not Proof I Am Assamese?'

Multiple families, including caste Hindu Assamese, said the NRC Seva Kendra officials had assured them they would be included. But their names weren't on the final list. 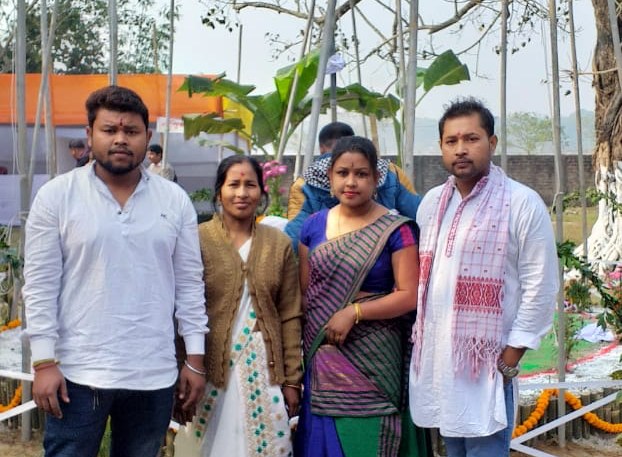 Kishore (right), with the traditional gamocha around his neck, and his family.

Guwahati: For 28-year-old Kishore Barman, a caste Assamese from Punarkawniya village in Assam’s Nalbari district, his accent defines his Nalbariya dialect. Considered one of the dhekeri (rustic) accents in lower Assam, his tongue is a sure-shot indicator that he is from the state. But neither his caste nor his tongue were enough to prove that he is a son of the soil. Kishore and his two siblings have been left out of the National Register of Citizens (NRC).

A Kafkaesque situation has gripped a section of indigenous caste Assamese, as they find themselves in the midst of a citizenship crisis. For the Khilonjiya (natives Assamese) whose names aren’t on the citizenship roster, this jolt is hard to recover from.

Those left out of the NRC now have to wait for the notice asking them to appear before a Foreigners’ Tribunal. Barman is in the middle of this wait – a wait which he defines as a nightmare, and an insult to his Khilonjiya status.

Screenshot of the NRC website, showing that the Barman family was rejected.

Kishore told The Wire that he had used his father Amulya Barman’s 1971 legacy to prove his citizenship, but when he checked the final list, him and his family were rejected without a reason being provided. His younger brother Ridib and sister Trishna were also rejected. The documents he submitted included his 1972 matriculation certificate, PAN card and voter ID, but to no avail.

“Never in our wildest dreams did we think this would happen. Last year, when the final draft was released, our names were left out. We reached out to the local officials at the NRC Seva Kendra (NSK). We were told that we need not worry, as we are caste Assamese, and our names would come in the list. We also attended an NRC hearing at Goreswar in Baksa district,” said Kishore.

“My father was a teacher. Our village is quite old and mostly inhabited by caste Assamese people [with surnames] like Barman and Kalita. There are some Khilonjiya Muslims too. But now I worry about our future. My brother is studying computer science and my sister has just completed her graduation. We have no option but to appear before the FT. It is both difficult and insulting that we have to now prove that we are sons of the soil,” Kishore, a teacher working under the Borigogbanbhag panchayat, continued.

According to Kishore’s uncle Prabhat Barman, who works in Guwahati, his nephews and niece are among very few from the village whose names have been left out of the NRC. Kishore also claimed that in a neighbouring village, Rampurazagora, also inhabited largely by Barman and Kalita castes, there are four Assamese households whose members’ names have been left out. The Wire tried to contact them, but was unsuccessful.

“It is only the three siblings whose names are not in the NRC. The rest of the family – his uncles and his cousins – are all in the NRC,” said Prabhat.

In Guwahati, Chandan Kumar Goswami, an assistant professor at the Department of Communication and Journalism, Gauhati University, said the NRC left him and his wife, mother and daughter out. The Goswami clan’s rejection also came without a reason. He had filed his NRC proceedings online by scanning his documents, including an admit card, PAN card, driver’s license, his mother’s pension papers, his daughter’s birth certificate and others.

“What does it mean by ‘simple reject’ and where are the reasons? After the final draft, I was told the names will come. I was told to come to an NSK which was not near my address. I was told things like ‘your application is floating and your case not in this category’. There were multiple assurances from the NSK people that my family’s names would come. But the most surprising fact was that I was served with no notice to appear for a hearing and for verification. The final NRC too showed ‘reject’. Again, I called the NSK people. I have no idea what to do now,” he said.

Goswami’s family legacy, according to him, is more than 300 years old. His siblings’ names are on the list. He said that he will look for legal course, and a PIL should be filed at the high court.

“My family is in despair. It is a humiliating experience. I want to know why there was no notice served to me. I have questions that the NRC authorities have to answer,” said Goswami.

In Rangiya, Kamrup district, few will be able to tell that 53-year-old farmer and part-time fishmonger Ziauddin Ali Ahmed is the nephew of a former president of India, Fakhruddin Ali Ahmed. Though he comes from such a prominent Assamese Muslim family, Ziauddin, his wife and two sons have not been included in the NRC. He calls the former president “dangor abba (grand uncle)”. His accent makes it clear that he is a Kamrupiya (from Kamrup).

“I don’t have the money to take forward my case. I am pinning my hopes on the state giving me citizenship status as I come from a family which gave the country a president. Past events resulted in the loss of important documents that could establish my relationship with my grand uncle. My sons Sajid and Wajid need jobs,” he told The Wire.

“I am waiting for the notice now. In in the initial phase of the NRC, there were problems in finding the legacy of my father Ekramuddin Ali Ahmed. When we found it, it was not accepted by the NRC people. There was also a mismatch in the spelling of my father’s name in other documents. A road has been named after my family in my village – is that not proof that I am a genuine Assamese and a citizen?” Ziauddin, who hails from Kolmoni under the Rangiya sub-division, asked.

Another Assamese family whose names have been left out from NRC are Soumar Jyoti Adhyapak and his daughter Sampurna. Soumar, who was born and brought up in Shillong, has his family origins in Sivasagra district in upper Assam. His father used to work for the Survey of India in Meghalaya, when it was part of greater Assam. He used his great uncle’s legacy, the 1971 voters’ list which he got from Meghalaya and his father’s employment papers from the Survey of India. Both he and his daughter attended hearings, and were also assured by the NSK staff that their names will come in the list. Incidentally, Soumar’s younger brother and nephew’s names have been included in the NRC.

“This has just harassment for us. We met with AASU people and other influential people to help us. But nothing has been fruitful. We also don’t want any politics to be played; neither do we want to be used as pawns. What will the caste Assamese people do when their names have been left out from NRC? The Gorkhas whose names were left out have their own association to fight their cases. I heard of Chandan Kumar Goswami and contacted him. I feel it is time that we get together and take forward our cases. We have to be independent. My daughter is pursuing engineering and it is about her future as well,” said Maitryaee Adhyapak, Soumar’s wife.