Salman Master says he is in pain all the time. Unable to work, he worries about the future of his family. 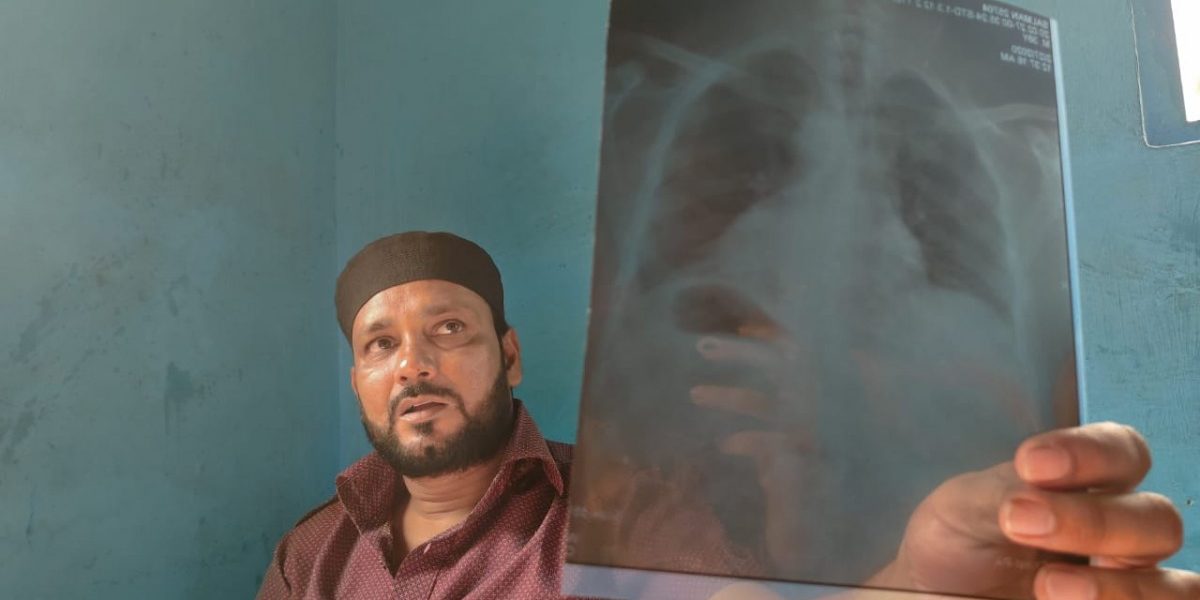 Master holds out an x-ray done during his treatment. Photo: Ismat Ara/The Wire

New Delhi: Salman Master was exiting the Jama Mosque in Northeast Delhi’s Chand Bagh area after offering namaz on February 25, when three men grabbed hold of him, beat him with sticks and fired at him while chanting “Jai Shree Ram”.

The bullet entered his right thigh and Master fell unconscious immediately after. It was the third day of Hindu-Muslim riots in the area.

Eight months later, his life has not returned to even a hint of normalcy. The bullet fired at Master remains inside his thigh to this date.

“It feels like something is piercing my thigh when I walk,” he said.

Master’s life was thrown into complete disarray after the riots – his possessions worth more than Rs 2.5 lakh were looted, he was severely injured in his arm, leg and head and was admitted to the hospital for over a week.

His landlord later pressurised him to shift to a new house. “He [the landlord] told us that he doesn’t want to keep me in his house as a tenant because the police would often come to question me,” Master said. He has now moved from Chand Bagh with his family and has rented a room in Shastri Park. Master’s youngest daughter looks at him while he tries to walk. Photo: Ismat Ara

A softy ice-cream machine, an LCD, two cylinders and one fridge were among the objects looted from his shop during the riots.

After sustaining an injury, Master was taken to Al-Hind Hospital in Mustafabad, where he received first aid treatment and was later shifted to LNJP Hospital. Two days later, the police came to question him in the hospital. Even after months of questioning and giving statements to the police, he feels that there has been no justice in his case.

After telling Master that the bullet inside him would “soon” be taken out, the hospital administration ultimately told him after five days that removing the bullet, which was stuck very close to the veins, might mean that his leg would have to be cut off, which the hospital refrained from taking any responsibility for. After being released from LNJP Hospital on March 6, the doctors at Al-Hind hospital have been giving him the required medicine and injections for the pain induced by the bullet.

“Mai ek ek paise ka mohtaj hoon aaj ke din me (I depend on others for every single penny right now),” Master said. From a very young age, Master has been looking after his mother, three sisters and four brothers. His father passed when he was 18. Hailing from Bihar’s Darbhanga, he came to the city in search of work and decided to settle there. He later got married and also became a father to five kids.

Today, 20 years later, he wonders if he should have stayed back in Bihar instead of coming to Delhi. “Aaj khata hoon toh kal ke baare me pehley sochta hoon (Whenever I eat a meal, I worry about how I will manage the next one),” he said. “I came here to find work. I have only been concerned about my work and sustaining my family. I have never cared about Hindu-Muslim issues…yet I have to suffer because of this divide,” Master said.

Another source of concern for him is all the loans that he has taken over the last eight months. “I have to pay people back their money, and I will only keep taking loans until I am able to get this bullet out of my body and find work,” he said.

Yet to receive compensation money

Even though he has been formally educated only till Class X, Master has written two letters to Delhi chief minister Arvind Kejriwal so far. He has also sent letters to Gopal Rai, a cabinet minister in Delhi but didn’t get the chance to meet him in person. He also tried to meet Imran Hussain, MLA from Ballimaran, with great hope but was refused. With the exception of the chief minister, Master said that everyone replied to his letters and said that they would help him, but to no avail.

“I thought they [political leaders] are there to help common people in trouble like me. I had gone to Arvind Kejriwal with a lot of hope. I thought if he would help me with getting the bullet safely removed, I could move on in life and find some work. But I have now stopped hoping for anything from them,” Master said.

In June, Master tried to contact the sub-divisional magistrate (SDM) of the area for help via WhatsApp as there was a nationwide lockdown in place at the time. He did not receive any response. “Everybody said you should go visit his [SDM] office. But people outside his office never let me meet him. They keep asking us to wait but never allow us to actually meet him. I tried 3-4 more times,” he said.

In August, he finally received a response from the SDM’s office asking for his bank details to send him compensation money under the Delhi government. Two months have since passed, but he has not yet received a single penny in his bank account.

Finally, he reached out to Okhla MLA Amanatullah Khan who, on Wednesday, assured him of treatment and compensation. “Mana toh koi bhi nahin karta, deta koi bhi nahin (Nobody declines to help me when I ask, but then nobody actually helps),” he said.

‘How do I sustain my family?’

Father of five children, he fears that he will never be able to send his kids to school now.

Once an active man, Master says he now feels like a liability since he can hardly walk. “I am essentially a handicap now, with five kids, old parents, a wife and no job,” he said. Master has been taking heavy medication to ease his pain. “My movement is suspended. I have no way of working. I am in pain all the time, how do I sustain my five children, a wife and an elderly mother?”

He now has an injured hand, a bullet stuck in his thigh and unexamined injuries in his head that often result in dizziness. 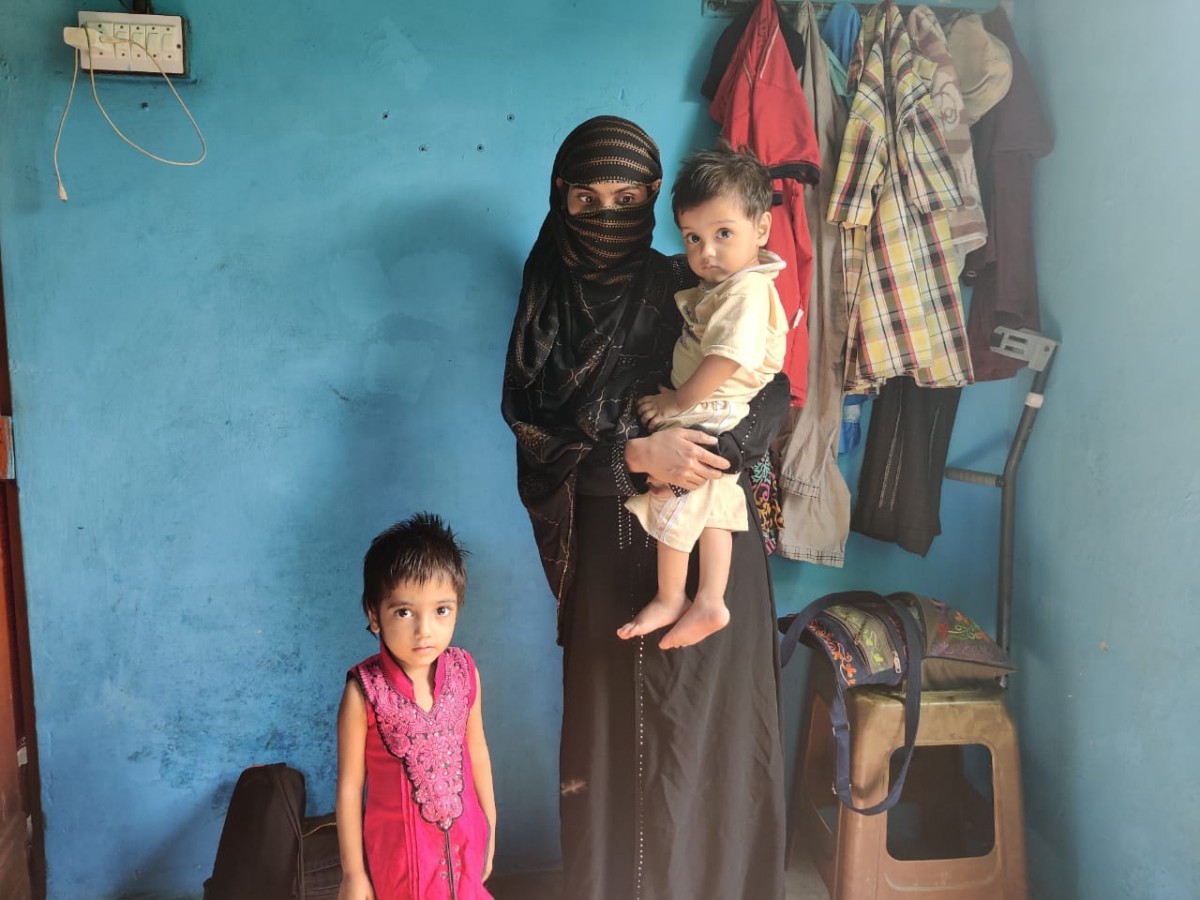 His wife Raeesa says that Master also has trouble sleeping. “He would go crazy if he didn’t go out of the house for even one day. And now he is in bed for over eight months,” she said.

Master is a devout Muslim and likes to offer namaz on time every day. But because of the bullet wound, he is unable to perform namaz in the traditional manner. He now sits on a chair and offers namaz, despite the pain. “I pray to God every day that the bullet is removed and I get well enough to find some work and feed my children.”