Eighty-three-year-old Stan Swamy, arrested by the NIA on Thursday, is among those named as accused in the chargesheet.

Ramesh Gaichor, Jyoti Jagtap and Sagar Gorkhe of the Kabir Kala Manch are named as accused in the supplementary chargesheet. Photos: By arrangement

The NIA, interestingly, did not seek his custody and instead informed the court that they have a chargesheet ready against Swamy and six other academics and activists arrested in connection with the ongoing Elgar Parishad case. Swamy was eventually sent to judicial custody till October 23.

Swamy, evidently exhausted by the sudden arrest followed by travel to Mumbai, stood in the court as the NIA read out the allegations against him. “He suffers from Parkinson’s disease along with other age-related illnesses. He wasn’t able to even sign the wakalatnama (legal document appointing a lawyer to represent oneself in the case),” his lawyer Nilesh Ukey told The Wire. Swamy was sent to Taloja Central Prison situated in the outskirts of Mumbai, where other male accused arrested in connection with the Elgar Parishad case are lodged.

Although the first chargesheet by the NIA, which took over the investigation in January this year, this is technically the third part of the chargesheet in the case. The earlier two were filed by the Pune police in November 2018 and February 2019. The supplementary chargesheet filed by the NIA today also mentions Milind Teltumbde as an absconding accused. Milind Teltumbde is believed to be a top-rung leader of the banned CPI (Maoist) organisation and has allegedly been involved in several underground movements since 1996. 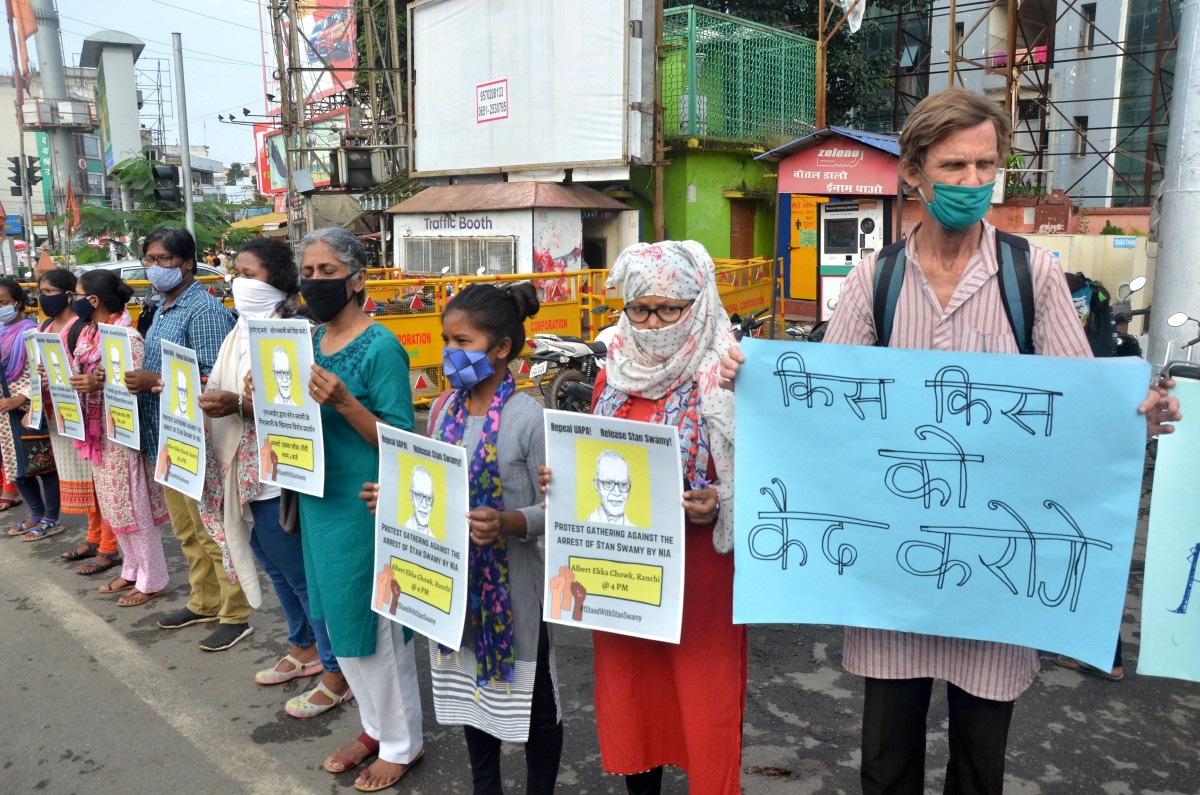 The Pune police, which was originally investigating the case from January 2018 to December 2019, had filed two chargesheets – a main chargesheet in November 2018 and supplementary chargesheet in February 2019 – against nine persons arrested in 2018. Those arrested in 2018 include Sudhir Dhawale, a writer and Mumbai-based Dalit rights activist, Mahesh Raut, a young activist from Gadchiroli who worked on displacement, Shoma Sen, who had been head of the English literature department at Nagpur University, advocates Arun Ferreira and Sudha Bharadwaj, writer Varavara Rao, activist Vernon Gonsalves, prisoners’ rights activist Rona Wilson and Surendra Gadling, a UAPA expert and lawyer from Nagpur.

The first chargesheet was filed by the Pune police, which ran to over 5,000 pages. The police had claimed that those arrested had “active links” with the banned Communist Party of India (Maoist) and had helped organise the ‘Elgar Parishad’ of December 31, 2017, under the banner of the ‘Bhima Koregaon Shaurya Din Prerana Abhiyan’ in Pune.

The Pune police’s case – which has now been taken forward by the NIA – is that this cultural gathering in Pune’s Shaniwarwada area, known to be a predominantly Brahmin hub, had incited Dalit youth across Maharashtra against the Bharatiya Janata Party and ‘Brahmin-oriented Rashtriya Swayamsevak Sangh’, leading to violent retaliation across the state. The speeches given at the Elgar Parishad were allegedly inflammatory and carried the intention of “harming the democratic fabric of the country”.

The first supplementary chargesheet was filed later in February 2019 and the state police had claimed that fugitive Maoist leader Ganapathy is the mastermind behind the Elgar Parishad.

In today’s supplementary chargesheet, the NIA has claimed, “Through meticulous, scientific and detailed analysis of more than 10,000 pages of communications made by various accused, reliable oral, documentary, and material evidence was brought on record.  The investigation has revealed that the tentacles of the conspiracy were not only spread throughout the country but also extended beyond India.”

The central agency has claimed that Teltumbde, Navlakha, Babu, Gorkhe, Gaichor, Jagtap and Swamy had allegedly conspired with those arrested earlier to “further the ideology of terrorist organisation CPI (Maoist) and abetted violence brought into hatred & incited disaffection towards the Government established by law and promoted enmity between different groups on grounds of religion, caste and community”. The absconding accused Milind Teltumbde, the NIA claims, also “organised training camps for imparting weapons training to other accused persons”.

The NIA’s claims are only an extension of what the Pune police had claimed earlier. The NIA has claimed that, “Incriminating documents were recovered from the accused which shows that they were involved in discreet communications with other Maoist cadres regarding conspiracy related to a violent incident of Bhima Koregaon as a part of their well chalked-out strategy.” The NIA claims that documents seized from arrested persons’ house and several electronic devices included various documents regarding “mobilisation against the constitutionally established Government by the Maoist cadres”. “Information about the movement of the security forces with an intention to cause heavy damage to the state” were also found, the NIA has claimed.

The NIA has alleged that during the investigation, they have unearthed “a systematic network of Maoists operating for the supply of arms and ammunitions having close nexus with other banned proscribed organisation within and outside India”. “The strategy and tactics adopted by Maoists to carry out a so-called urban revolution with their frontal outfits have also been revealed during the investigation. Besides this, funding activities of Maoist cadres and their sympathisers to carry out Maoist work in rural as well as urban areas came to the fore,” the NIA has claimed in the supplementary chargesheet.

Attributing roles to individuals, the NIA has accused Anand Teltumbde of playing “an active role with other Maoist cadres”. “Teltumbde received funds from them for carrying out the activities (the Elgar Parishad event organised at Pune’s Shaniwarwada area on December 31, 2017). Incriminating documents revealing his deep involvement with CPI (Maoist) activities also came to the fore,” the NIA has said in the chargesheet. Navlakha, the NIA says, played an active role and his involvement allegedly came up in the secret communications with CPI (Maoist) cadres. “He was assigned the task to unite intellectuals against the Government.  He was part of some fact-finding committees and was assigned the task to recruit cadres for guerrilla activities of CPI (Maoist).  His links with Inter-Services Intelligence (ISI) also came to fore,” the NIA has claimed.

In the chargesheet, the NIA has claimed that Babu was instrumental in “organising visits of foreign journalists to CPI (Maoist) areas and was assigned present and the future task of Revolutionary Democratic Front (RDF), a banned organisation in Andhra Pradesh & Telangana”. He, the central investigating agency claims, was in contact with “banned terrorist organisation Kanglepak Communist Party (KCP) of Manipur” and was instrumental in making efforts for the release of convicted accused G. N. Saibaba on the directions of CPI (Maoist) and was raising funds for the same.