The Population Foundation of India said that the total fertility rate is now below the replacement level, asking governments to steer away from coercive measures. 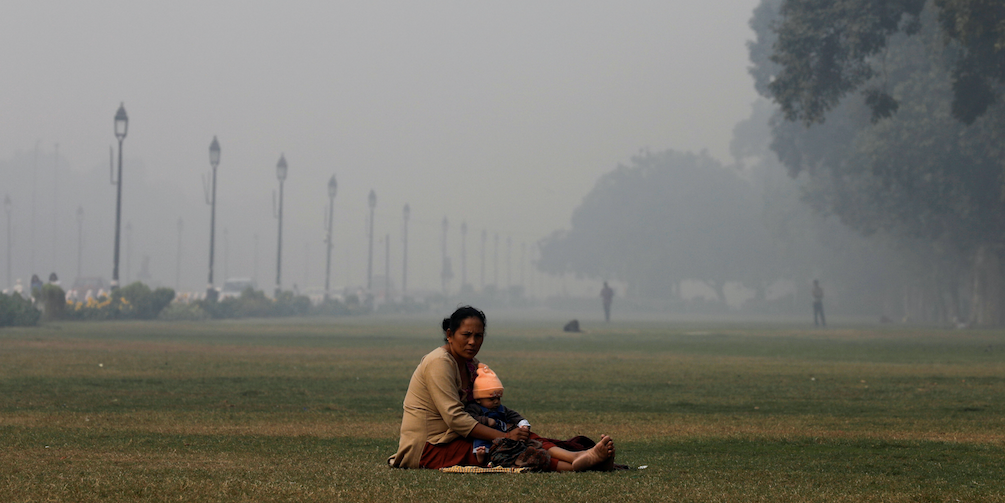 A mother and child sit amidst the smog at India Gate. Photo: Reuters

New Delhi: The Population Foundation of India (PFI) has said that the complete set of findings from the fifth round of the National Family Health Survey (NFHS) “busts the myth of population explosion” in India, since the total fertility rate (TFR) now stands below the replacement level.

PFI is an NGO that advocates for the effective formulation and implementation of gender-sensitive population, health and development strategies and policies. The NFHS data, released on November 24 by the Ministry of Health and Family Welfare, provide the “most comprehensive data on health and family welfare issues”, PFI said.

It said that the results of the survey show that the fall in TFR – the average number of children that would be born to a woman over her lifetime – is a significant achievement, highlighting that it had been achieved without “coercive policies”. The TFR now stands at 2.0, which is below the replacement level – the rate at which a population exactly replaces itself from one generation to the next, without migration – of 2.1.

Also Read: PM Modi is Worried About Population Explosion, a Problem Set to Go Away in 2021

“These findings bust the population-explosion myth and show that India must steer away from coercive measures of population control. While the increase in the use of modern contraceptive methods is heartening, an increase in female sterilisation coupled with continued stagnation in male sterilisation uptake shows that the onus of family planning still lies with women,” PFI said in a press release.

After China amended its two-child policy, PFI had issued a statement that it is proof that empowering women and enhancing their capabilities works better than coercive population policies. It hoped that those who have been demanding that India should enforce limits on the number of children will realise their suggestion is misplaced. However, soon after, the Uttar Pradesh government signalled its intention to pass a law to control the state’s population.

Commenting on the findings of the NHFS 5, PFI highlighted that while the use of condoms has increased from 5.6-9.5%, its uptake continues to be poor. “This is despite the fact that 82% of men (aged between 15 and 49 years) reported knowledge that consistent condom use can reduce the chance of getting HIV/AIDS,” the release says.

“The government must adopt a targeted social and behaviour-change communication strategy to ensure that men also take responsibility for family planning,” Poonam Muttreja, the executive director of PFI, said. “Most programmes assume that primarily women are contraceptive users. There is a dearth of interventions that focus on improving male engagement in family planning.”

The organisation also highlighted that the NFHS data shows significant progress on “several indicators related to fertility, family planning, age at marriage and women’s empowerment” but there remain a few areas of concern—notably, nutrition, gender-based violence and low levels of digital literacy among women.

Illustration of a family with two kids. Photo: Sandy Millar/Unsplash

“The total unmet need for family planning has come down to 9.4% in 2019-21 against 12.9% in 2015-16, though the figure is still high,” the release added, also praising the fact that most respondents felt there was a significant improvement in quality of care in family planning.

The concerns, PFI said, are that anaemia and obesity are growing among women, men, adolescents and children, while child marriage has come down just marginally from 27% in 2015-16 to 23% in 2019-21.