'Just a Cricket Match': 10 J&K Men Booked Under UAPA For Playing in Memory of Slain Militant

News of players being arrested under an anti-terror law for sporting jerseys in memory of Syed Ruban has stunned locals and kept them off the grounds. 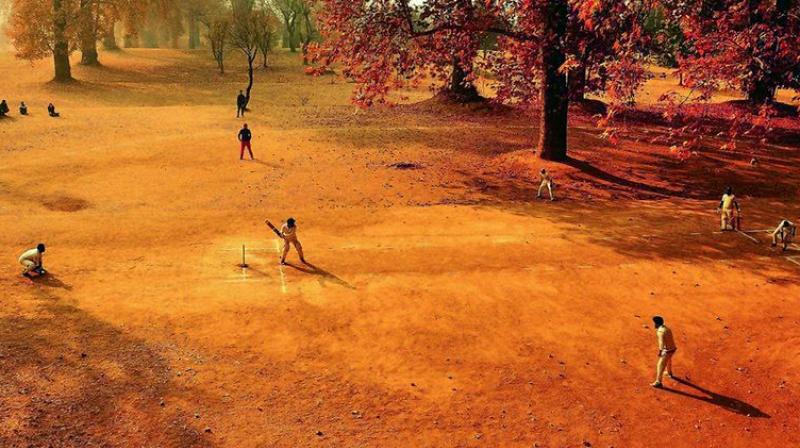 Representative image of a game of cricket being played under the shade of chinar trees in Kashmir. This photo was the 2016 Wisden-MCC Cricket Photograph of the Year. Photo: Saqib Majeed

Nazneenpora Shopian: The grounds situated on the banks of the Jhelum tributary Rambiara, are usually the site for pitched cricket matches, complete with spectators. For the last week, however, they have been empty, so much so that herdsmen have been leading cattle into the field for grazing. Not much can keep locals off sports, but the booking of 10 young men under the Unlawful Activities Prevention Act (UAPA) for organising and playing a match in the memory of a slain militant, can.

On August 4, youth belonging to the adjoining localities had organised a cricket match. Among them was Syed Tajamul, the 24-year-old brother of a slain militant commander, Syed Ruban.

Tajamul and Ruban’s father, Mohammad Hussain told The Wire that his son had decided to distribute cricket uniforms among players, in memory of his brother. The clothing had Ruban’s name on the back. Ruban had been a cricketer of repute at Nazneenpora village. He later joined the Al Badr militant outfit in July 2018, and was killed six months later during a gunfight in Budgam.

Tajamul had uploaded a note on social media after the match, in which he had mentioned that he distributed these cricket uniforms as cricket was his brother’s favourite game, “He was a talented cricketer, admired by his friends for his love for the game and talent he had got,” the note read.

His added that people should encourage youth [in sporting pursuits] lest they fall for drugs and other social evils.

Twenty seven days later, some of the men who played at the match have been slapped with the UAPA, a draconian anti-terrorism law under which a person can be designated a terrorist and jailed for up to seven years.

Jammu and Kashmir police have charged them (in FIR No. 206 of 2020) under Section 13 of the Unlawful Activities Prevention Act (UAPA) for the alleged ‘glorification of militancy’.

The families of the men who have been arrested are still unaware of the severity of the charges under UAPA. They have not yet received a copy of the FIR.

Prayers at a graveyard

Hussain said that his son Tajamul was arrested from Srinagar on September 1, almost two weeks after the cricket match was organised, while he was on his way to work. A recent MBA graduate from Chandigarh, Tajamul worked at a private company. “At the match, there had been no slogans or protests. It was just a cricket match,” he said.

According to Hussain, after the match on August 4, nine of the players who were locals happened to take the road home together with Tajamul. On the way was the graveyard where Ruban is buried. The players decided to pay a visit to his grave and offered fatiha—a practice in Islam where people gather around persons grave and send prayers for deceased.

“Offering fatiha is performing an act of religious belief. I don’t think it can bed called criminal, or that it is an unlawful act,” said Hussain.

“A person’s identity is with him only till he is alive. People have every right to perform religious duties no matter who the deceased was,” he added.

Hussain said Ruban had been a bright student, keen on joining the civil services. “He was harassed several times by the police and Army. This could have led him into militancy. We are normal people and should be allowed to live normal lives,” he said.

After the fatiha, the players and Tajamul, had posed for a photograph in the uniform. Someone later uploaded it on social media. This photograph, the families believe, is what led to the problem.

Umer Farooq, 22-year-old from Pashpora, a small hamlet almost 1 km from Nazeenpora, is one of the men arrested. Farooq is studying at the Government College at Shopian. His family said he has never been arrested before and has no criminal records.

“Because of the COVID-19 lockdown [and closure of educational institutions], our children spend time playing matches. My son is fond of cricket. That day, he had gone to play cricket. He had no other intentions,” his mother, Safiya Farooq, said.

Safiya hopes that her son will be released soon. However, her husband, Farooq Ahmad, who runs a shop at Pashpora told The Wire that he is worried as to when his son will be released. The family is not being allowed to Umer either. “The incident has frightened my other children. We don’t let them play or go outside now,” he said.

Gowhar Ahmad, who is their neighbour, has also been arrested in the same case. His family said that Gowhar got a call from police station at Keegam. He went there without the slightest clue that he would be arrested. “Had he known, he wouldn’t have gone alone,” Ameena, his mother, said.

According to locals, the nine arrested players belong to areas adjoining Shopian. Five are from Pashpora, two from Mazham Shopian, one from Babanar Shopian and one from Nazneenpora Shopian. Eight of them are students. One is a private teacher.

Ameena said that Gowhar and other boys had grown up with Ruban, who used to play with them. “That is why they prayed for him, not because of his identity but because he was known to them,” she said.