Equal rights and equal citizenship are in tatters, and Indians have been divided into Hindus and 'others'. 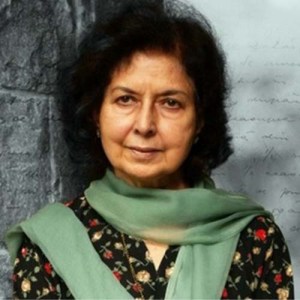 The following is the text of the Bhai Vaidya Memorial Lecture delivered by Nayantara Sahgal in Pune on April 2, 2019.

Socialism is not a word one hears these days. In our market-obsessed consumer society where everything is judged by its market value, and whose icons are the fabulously rich, socialism is out of favour, out of fashion and considered out-of-date.

In this new India, a few billionaires own the bulk of India’s wealth while millions live below the poverty line and this inequality is taken for granted. So that is why I am happy to receive this award in memory of a lifelong socialist and to be reminded of a philosophy whose guiding star was human value, not market value.

I never met Bhai Vaidya, but from what his son, Dr Abhijit Vaidya, has written to me about him, and what I have read about him, his lifelong career in socialist politics – starting at the age of 18 as a member of the Congress Socialist Party – never wavered in its resolve. First, to fight for freedom from British rule as a mere teenager, he got involved in the Quit India movement, and then, in independent India, worked for justice and equality for all Indians.

Socialism was at the centre of the Congress Party’s economic platform from 1931 onwards. Nehru described it as not only an economic doctrine but as a philosophy of life. It was, for him, the practical as well as the sensitive way to deal with Indian realities and it became the model for development on which our secular democratic republic was founded. It had the allegiance of many of the best and most brilliant minds in India and abroad, and it was especially attractive to young Indians who passionately wanted to bring about a social and economic transformation in the country.

Bhai Vaidya was one of those radical young men. As a political activist, he took part in the campaign to liberate Goa from Portuguese rule, and in 1974, he joined JP’s movement in opposition to the growing authoritarianism of Indira Gandhi’s government. That was a time when Bhai Vaidya and I could have met, since I also participated in JP’s movement, and at JP ’s request, I was writing a column for his Everyman’s Weekly until it was shut down under censorship and its last copy was shredded in June 1975 when the Emergency was declared.

As Mayor of Pune at the time – a time when all opposition had been silenced – Bhai Vaidya held a public rally against the Emergency and he was jailed under MISA – the notorious Maintenance of Internal Security Act – from 1975 to 1977. It seems that at no time from his boyhood on did he sit silently when there was a national crisis, which shows his ongoing involvement in national affairs and his uncompromising commitment to the cause of freedom whenever it was threatened.

The Congress Socialist Party separated from the Congress due to its differences with Mahatma Gandhi’s more conservative economics and pursued a radical programme of its own after independence to broaden its base to focus on peasants and the working class. It had little to no expectations of coming to power, or of personal or political gain. Its members were in politics out of conviction and Bhai Vaidya belonged to that committed breed of men and women.

Times have not only changed, but we are now living in an India that has no connection with its modern political past. Secularism is under attack. Equal rights and equal citizenship are in tatters, and Indians have been divided into Hindus and ‘others’. The truth is that this divide is not between Hindus and others. It is between a militant creed called Hindutva and those whom it calls ‘others’, and it is a negation of all that Hinduism represents.

A great many Hindus are opposing this communal ideology and its political agenda of vengeance and violence against fellow Indians whom it calls outsiders, and its objective of setting up a Hindu Rashtra in place of our secular democracy in which the state has no role in religion. Our founding fathers were members of a Constituent Assembly in which the majority of members were Hindus.

Also Read: Why Pluralism and Secularism Are Essential for Our Democracy

Yet they rejected a religious identity after independence for the good reason that only a secular state would respect and protect all our religions, leaving Indians free to worship according to their beliefs. And the Constituent Assembly chose democracy, starting with universal suffrage at the outset, to ensure equal citizenship with equal rights for all Indians in our plural society. This civilised legacy is now being taken apart.

Those whom Hindutva calls ‘others’ are now classed as outsiders and the Muslims among them are being treated as enemies of the state. In addition, all differences of opinion with the ruling Hindutva ideology are being condemned as anti-national and those who will not fall in line with Hindutva are being singled out for punishment.

The questioning mind, the scientific outlook, the rational approach, the creative imagination and freedom of expression, have no place in today’s backwards-looking new India, which is ignoring the fact that India is a democracy.

In a democracy, citizens are not arrested and jailed on false charges of sedition and on invented conspiracy theories. Citizens who are guilty of no crime are not publicly tortured and lynched because they are Muslims. Mob attacks on mainly Muslims do not take place. Christian churches do not get vandalised by mobs and Christianity is now under fire.

In a democracy, citizens do not get shot dead by gun-toting motor-cyclists, as has happened to five eminent rationalists and free thinkers who have been killed for rejecting superstition in favour of reason, and for their independent views. Above all, in a democracy, criminals are arrested and convicted for their crimes. The reverse is happening here. Criminals roam free, protected and even congratulated by the ruling power. The message from those in power is clear: either agree with us or suffer the consequences.

All this is, of course, a direct attack on our constitution which guarantees life, liberty and equality to all Indians. The fraternity that we have always taken for granted, and which has been part and parcel of our multi-cultural civilisation for centuries, with people of different religions living side by side in peace and harmony, is being savagely undone.

Also Read: India Needs to Rethink How It Looks at Secularism

We are watching the destruction of the very meaning of India and of all that Indians have built since independence. The destruction is widespread.

Apart from the crackdown on freedom of expression and on those known as ‘others’, the key institutions set up in the early years after independence – whether they concern history, science, or the arts, or information, education, and all aspects of culture – have been taken over by men and women of the ruling fundamentalist mindset.

The independence and integrity of universities is being challenged, students have been arrested for their dissenting views, school textbooks are being drastically altered with no regard for facts, and history is being re-written. One or two states have wiped the Mughal Empire out of their textbooks. In some, Gandhi and Nehru are either absent or reviled. Museums and Akademis, have been put under state control, thereby losing their autonomy and the purpose for which they were founded.

Along with all this damage, the scientific frame of mind that has been encouraged and taught since independence as being indispensable to a modern nation, is being replaced by myths and fantasies. One of these is of an exclusively Hindu identity in a glorious bygone era when the country was culturally, ethnically and religiously pure, with no outside influences to sully and soil its Hindu purity. Can modern nationhood be based on an obsession with religious identity and an imagined racial purity?

Every culture is the outcome of cross-fertilisation with other cultures. There is no such thing as a pure race or a culture that is not a mixture of many influences from beyond its borders. As individuals and as nationalities we are all the result of encounters with others. There is no end to our involvement with strangers and the debts we owe them for broadening our minds and enriching our lives, or the ways that we, in turn, influence them.

I live in north India which is heir to Islamic heritage, from its monuments to its music, song, dance, language, food and manners. And speaking of language, when after independence it was being decided how many languages should be recognised as official Indian languages, a list of about 13 was drawn up.

Prime Minister Nehru looked down the list and asked why it did not include Urdu. The official in charge said, “Because Urdu is nobody’s mother tongue.” Nehru said, “It is mine”, and he had Urdu put on the list. This was no exaggeration, it was a fact, as well as an acknowledgement of our multi-cultural civilisation. We acknowledge it not only by such statements of fact, but we have also long celebrated our diversity through the stories and poems we write, and through our songs and dances and cinema.

As a novelist, my writing owes much to my Hindu-Muslim heritage. Let me give you one example. A character in a novel of mine called “Mistaken Identity” is a poet called Bhushan Singh. He has been arrested and is being tried in court in 1929 during the British Raj. The prosecuting lawyer asks him, “What is your religion?” Bhushan Singh replies, “My religion is poetry. Otherwise, I am a Hindu Muslim.” The lawyer gets angry and demands a proper reply. “What are you, a Hindu or a Muslim?” Bhushan Singh takes time to think this over. Then he says, “Well, my mother tongue is Hindi and my father tongue is Urdu and I dream in both languages. My diet, and therefore my digestion, are mostly Muslim, but my blood seems to circulate in Hindu fashion, and my heart beats alternately to each.”

As we recall the life and work of Bhai Vaidya today, let us remember the India he helped to build and make sure that, the free and just society he worked for all his life, will live on.

Thank you for giving me this opportunity to speak in his memory.

Nayantara Sahgal is an Indian writer, winner of the 1986 Sahitya Akademi Award and the niece of Jawaharlal Nehru.