My Impressions of the Sedition-Accused Students of JNU

Kanhaiya Kumar, Umar Khalid and Shehla Rashid are three of the brightest student leaders. Their grasp on facts and depth of understanding should be lauded, not punished. 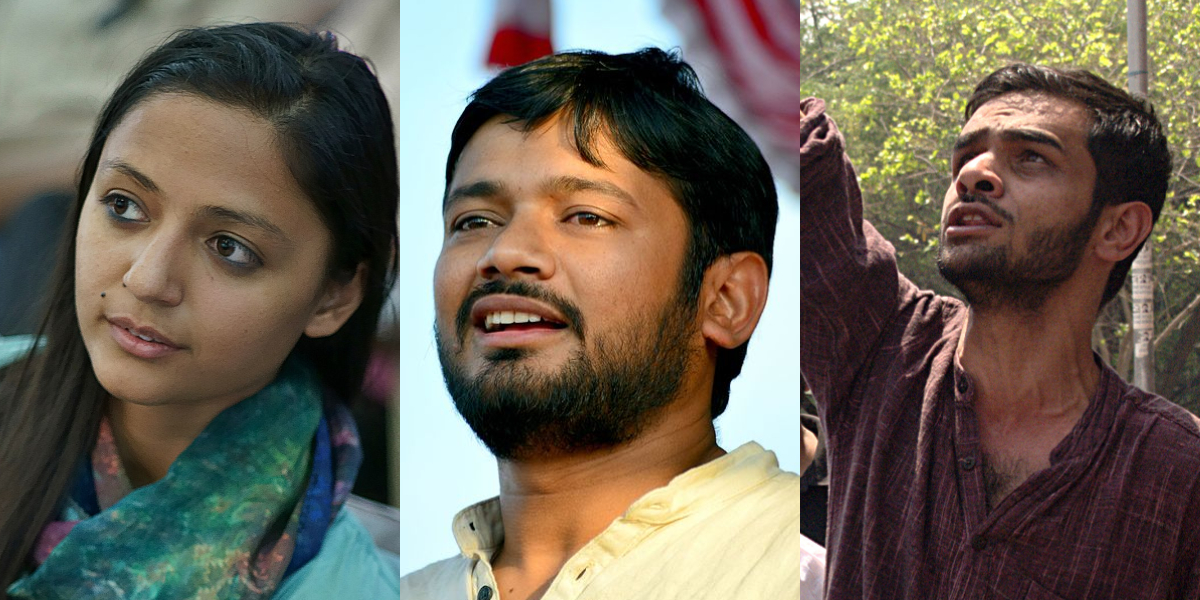 Who can possibly forget the brouhaha that burst onto our TV screens in February 2016 as news anchors breathlessly informed us that student leaders from Jawaharlal Nehru University had been arrested and thrown in jail “for committing sedition by raising anti-India slogans”.

Every single night for the next couple of weeks, TV debates raged, news anchors turned into self-styled dispensers of justice, members of the ruling party thundered condemnation at anyone they considered an enemy of the state and a new type of national foe came into being – ‘the anti-national’.

But only 18 days later, on March 2, the accused were released in a dramatic turn of events and returned to a hero’s welcome in JNU. The same night, every major TV channel in the country broadcast Kanhaiya Kumar’s rousing ‘bhook, garibi aur tanashahi se azadi’ speech live and the government ended up with egg on its face. From that point on, Kanhaiya Kumar, Shehla Rashid and Umar Khalid became the new faces of youth resistance against the Narendra Modi government.

It comes as no great surprise to anyone that three years after the event and a mere three months before the next general elections, the sedition bogey has been resurrected. As someone who has met Shehla, Kanhaiya and Umar more than once over the last three years, I feel I have an obligation to share my personal impressions of these most high-profile of all (ex) university students in India.

My first encounter with Shehla and Umar

The first time I met Shehla Rashid and Umar Khalid was at a protest meeting at the Press Club of India in Delhi, in honour of Gauri Lankesh, the outspoken journalist who had been brutally murdered on her own doorstep in September 2017. It was a hot, muggy day and the mood at the Press Club was sombre. The premises were packed and one by one, media persons of note took the mike and condemned the killing.

Umar was standing in the back of the audience. I started a conversation with him and asked him how he was doing and also where he felt the Indian republic was heading. I can’t remember his answer to the first question but I clearly remember his answer to the second, because it was a) unexpected, given the circumstances of the day and b) insightful to the point of being prescient.

He said, “The powers that be might look invincible right now but the cracks are beginning to show, and I think it will be a matter of time before the rest of the country starts seeing them as well.”

Remember, this was in the second half of 2017 when Narendra Modi was riding the crest of his popularity and those in the activist/liberal/secular space were probably experiencing their darkest hour in the wake of this most brazen of attacks on free speech. So secure was the PM in the knowledge that he ruled the popularity polls that he completely ignored calls from several respectable journalists asking him to stop following foul-mouthed and venomous Twitter trolls (including one who had called the deceased journalist “a bitch”.) Looking back over the last year and a half, the cracks in the establishment have certainly started to show and are, in fact getting bigger by the day.

I asked Umar if he had any plans to join politics and he said, “I want to continue working at the grassroots and helping the cause of the Adivasis”. We did not have a long conversation but it was a meaningful one. To this day, I remember his genteel demeanour, nuanced and razor-sharp understanding of the problems besetting India and most of all, a quiet commitment to helping those Indians that others do not have time for. 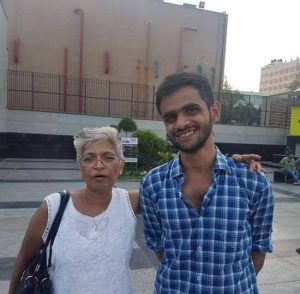 I then walked over to Shehla Rashid who was wearing a protest placard and had just finished giving an interview to a small news website and struck up a conversation with her. She asked me what I did and I told her I was a teacher. We ended up having a very interesting conversation about the importance of modeling good values to children at a young age. For some reason I was not expecting to have a conversation with anyone that day about schools and children, and was, frankly, very happy to see a young activist speak emphatically and knowledgably about the state of education. Her recommendations? “We need to spend at least 10% of our GDP on education if we are to make a dent in the future.”

What struck me about her and Umar both, was the ease and depth with which they spoke about the complex issues facing India. It had been a day of mourning and sobriety but talking to both the activists somehow made me feel strangely better and more hopeful about the future. My mind felt clearer; I had actually learned something from both conversations. Whatever it is they teach them in JNU, I remember thinking, it’s good!

A few weeks later, a colleague and I met Shehla Rashid and a group of her friends at a coffee shop. During the course of the conversation, I cracked a joke. Everyone in the group burst out laughing.

To my surprise, Shehla suddenly said, “Guys, don’t laugh so loudly!” We all went quiet.

She pointed to the waiter who had just taken our order and said, “I don’t want him to feel we are laughing at him.”

It was a small gesture, but it’s the consideration we show to others in small ways that shows others what kind of people we are. Shehla Rashid is a kind and thoughtful person. I saw that for myself. (Compare that now with the video footage that crops up every now and then of our Prime Minister rebuking his security guard for standing in the way of a camera or walking past L.K. Advani, ignoring his namastes completely.)

Also Read: Activists’ Arrests: The Exceptional Has Been Made the New Normal

A few months later, when details of the horrific Kathua rape and murder incident came to light, Shehla and her colleagues went on to collect a substantial amount of funds for the family and made sure it was delivered to them.

Umar Khalid escaped an attempt on his life in August last year and Shehla Rashid had to take time off Twitter because of the sheer volume of negativity and ugliness she has had to face for her views. It makes me wonder what kind of a country India has become for intelligent and compassionate young people.

Kanhaiya Kumar, in many ways has been the most visible of the three and has probably been on the speaking circuit the most. The first time I met him was at the India International Centre, where he spoke a couple of months after the high drama of his arrest and release. Policemen stood in the back of the room, videoing every word he spoke. His talk was par excellence, his grasp on facts complete, and his logic, foolproof. I met him after his talk and told him I admired him for his courage. He smiled like a boy and said in slightly broken English, “If we all keep the poor in mind, we find courage.”

The next time I saw him was in JNU itself, a couple of years later, incidentally on the morning of Republic Day. I had gone there to visit a friend and while waiting outside one of the hostels, saw Kanhaiya wander out, hands in his pockets, slightly shivering in the cold. His feet, I noticed, did not have socks. Turning to the person next to him, he said, “Aaj Republic Day pe garma garam jalebi khaane ka mann kar raha.” I burst out laughing. Was this the chap who had managed to set an entire political dispensation back on its heels? God, as they say, has a sense of humour.

According to one of its many definitions, “A republic is a king-less form of government that has no monarchy and no hereditary aristocracy; the word republic comes from the Latin language words ‘res publica’, which means a ‘public thing’.”

Also Read: A Higher Threshold Should Be Set for Prosecution Under Sedition Law

I don’t know when I will meet Kanhaiya Kumar again, but the next time I do, I hope India is a well-functioning republic again. I look forward to offering him a garma garam jalebi that day. Till then, I wish him, Shehla Rahid and Umar Khalid the very best. May their dream of a better India come true.