That the historic Muzaffarnagar mahapanchayat was not just a farmer-related one any more was apparent from the diversity of attendance it drew and from the content of the speeches made at the happening. 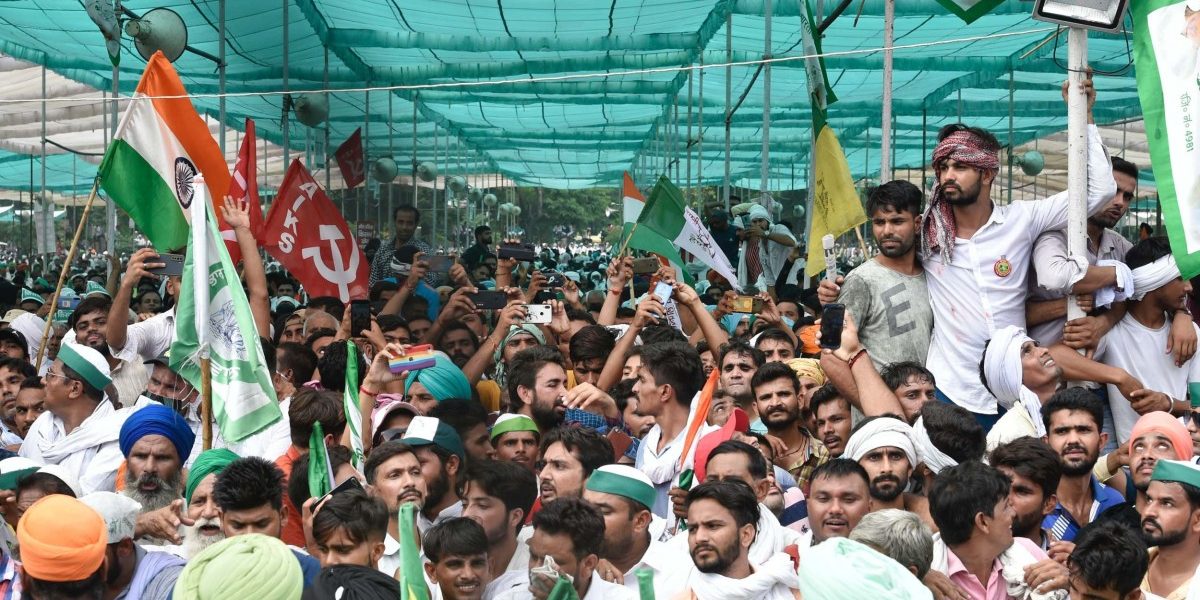 When nothing seems to happen, it happens.

By all accounts, including some shame-faced ones from the captive media, Indians in excess of half a million took over Muzaffarnagar in western Uttar Pradesh on September 5 to proclaim a sentient democratic resolve to fight against the anti-people policies of the Modi government.

That the historic mahapanchayat was not just a farmer-related one any more was apparent from the diversity of attendance it drew and from the content of the speeches made at the happening.

This was no exclusive Punjab, Haryana or western Uttar Pradesh event, but a representative conglomeration of all segments of the peasantry from across the republic.

That this spot – from where the Bharatiya Janata Party (BJP) had launched its bid for power on the back of orchestrated communal mayhem in 2013 – could well become the nemesis of the ruling dispensation in the days to come was apparent from several conjoint facts and articulations at the unprecedented turnout that saw droves of participants occupying flyovers beyond the venue for lack of space.

For one, this was no longer just a farmers’ conclave. In it were shopkeepers, sundry numbers from the MSME sector, unemployed urban youth, women across a wide spectrum of occupations, civil rights activists, public intellectuals, trade unionists and other social groups impacted in terminal ways by the brazenly pro-market, pro-rich and pro-majoritarian policies of the Modi government.

Ominously for the right-wing, those that had been participants in the sectarian rampage of 2013 were heard raising invocations like “Allah hu Akbar” as in speech after speech, they acknowledged having been duped eight years ago to mount a pogrom against their co-working Muslim sisters and brothers.

Concomitantly, sentient critiques of the Modi government’s economic lurch towards crony corporate came to be voiced with a clarity and comprehensiveness suggestive of the intellectual acumen of India’s food producers.

That this was not a remake of the erstwhile JP andolan (which, coincidentally, had also begun from Muzaffarnagar) was apparent both from its secular resolve and its pushback against right-wing policies of privatisation of national wealth to the detriment of the labouring “we the people”.

Just for the record, scions of the Sangh parivar had been participants in that JP andolan of the mid-1970s.

Notably, the articulation of protest against authoritarian rule, likewise, had a distinct leftward orientation rather than a conservative-democratic one.

Those that had once been dubbed “a sack of potatoes” could be seen to be proffering a class consciousness that one was taught to think could belong only to the proletariat.

This once, it was the farmer who was clearly the vanguard, carrying the working class in tow.

Clearly, the sum of the economic critique that was available at the mahapanchayat suggested that even if the government were now to repeal the impugned farm laws, it might only suffer the double jeopardy of eating crow and still being unable to draw down the movement that seems to have acquired a broader ideological dimension.

From what one can see, this dimension takes in a critique of both Hindutva and its alliance with corporate wealth.

That the secular, impressively literate and democratically organised and expressed movement bears a watershed potential to turn back the reactionary and authoritarian lurch of the state may not be an interested chimera any more.

Also read: The Bias Against the Indian Farmer Is a Deep and Troubling One

As for political strategy, in not espousing any one opposition party but setting the goal only of defeating the BJP, the leadership of the movement has astutely left organised opposition parties the leeway to work out as best they can strategies to firm up the operative details of how the macro-objective of the movement may best be aided and achieved.

That the shape and consequence of the electoral battle in Uttar Pradesh will be a pointer in that regard should be obvious.

A new beauty clearly is born.

It remains to be seen how transient or how long-lasting it may be.

Should India’s party-political opposition fail to rise to this moment of rebirth generated by the people’s movement, their guilt will indeed be unforgivable.